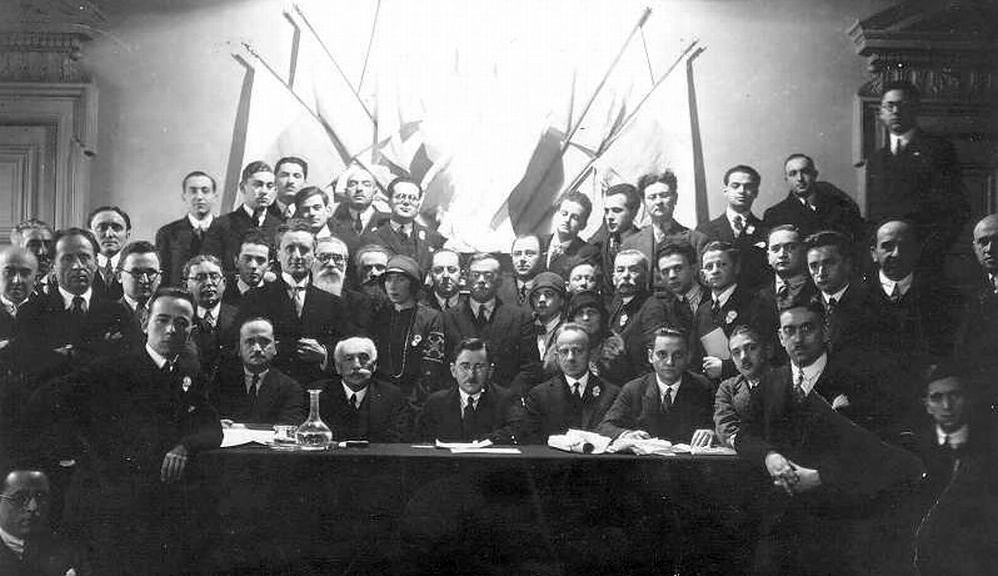 Ze’ev Jabotinsky (second row in the very center, wearing glasses) at a Revisionist Zionist conference likely in Paris in the second half of the 1920s. Wikipedia.
In 1919, a fierce debate broke out among the Jews of the Land of Israel, much like the one raging in the U.S. at the same time, over the question of whether women should be allowed to vote in the emerging institutions of Jewish self-government. The debate pitted secular Jews against the Orthodox, and especially members of the staunchly traditionalist Old Yishuv, so called because it had been established before the Zionist pioneers began to arrive in the 1880s. Despite his reputation as a moderate, Abraham Isaac ha-Kohen Kook, the chief rabbi of Jerusalem—and soon thereafter of Palestine—came out against women’s suffrage. Vladimir Jabotinsky, a prominent anti-socialist Zionist who in 1925 would found the right-wing Revisionist movement (the precursor of today’s Likud), was incensed. To him, Rabbi Kook and his supporters were ignoramuses “who came out of a hole in the wall . . . and never heard the name of John Stuart Mill.”