Israel and the American Presidents: Eisenhower

A lecture on December 18 with Michael Doran. 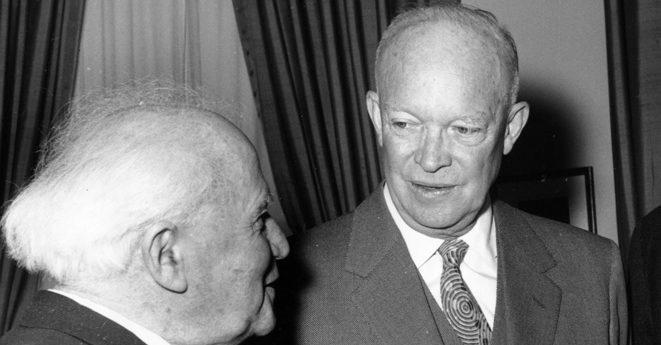 In his November 13 lecture on Israel and the Truman administration, Michael Doran gave us a front-row seat to the conflict between President Harry Truman and his bureaucratic counselors over the issue of whether the U.S. should recognize the new State of Israel.

Guided by Dr. Doran, we will meet and get to know, in addition to Eisenhower, such key figures in this drama as Gamal Abdel Nasser, John Foster Dulles, and David Ben-Gurion, and we’ll be introduced to events and ideological positions that bear a surprising relevance today. For while American attitudes toward Israel and the Middle East have changed, contemporary debates within the national-security establishment echo those going back more than a half-century.

Michael Doran is a senior fellow at the Hudson Institute in Washington, DC. He received his PhD in Near Eastern Studies from Princeton University, and held high-level positions in the administration of George W. Bush. He appears frequently on television, and has published extensively in Mosaic, Foreign Affairs, The American Interest, Commentary, The Wall Street Journal, The Washington Post, and The New York Times. His most recent book is Ike’s Gamble: America’s Rise to Dominance in the Middle East.

The lecture will take place at the Tikvah Center at 165 East 56th Street, New York, New York, 10022. In addition, a webcast recording will be made available live and for five days after.

If you have any questions, please contact Avi Snyder at asnyder@tikvahfund.org.