In his prize-winning new novel, Reuven Namdar asks whether American Jewry is a house on fire. His answer is. . . . 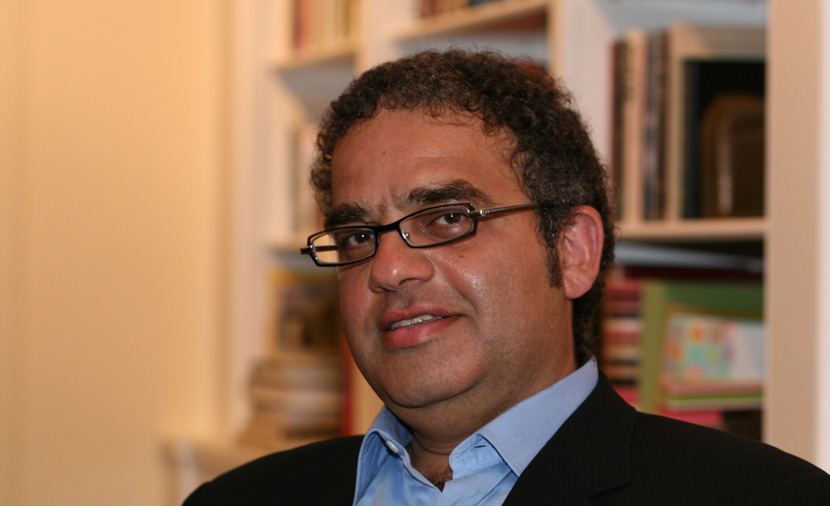 Israeli reviewers have repeatedly invoked the word “ambitious” to describe Reuven Namdar’s Hebrew novel, Habayit asher neḥerav (“The House That Was Destroyed”), which in January won the Sapir prize, Israel’s equivalent of Britain’s Man Booker award. The term is richly deserved. In The House That Was Destroyed, Namdar, an Israeli of Persian descent who for the past fifteen years has made his home in New York, has given us, simultaneously, four kinds of novel. Each is worth describing in order to grasp what may be the book’s culminating, if most elusive ambition: to be read one day by the American Jews who are implicated in its pages.

First, Habayit asher neḥerav is a campus novel. Andrew Cohen, its American Jewish protagonist, is a successful, fifty-two-year-old professor in the “department of comparative culture” at New York University. A popular teacher, he writes highly regarded academic essays in the fashionable postmodern mode; his current effort bears the provisional title “Woody Warhol and Andy Allen: Representations of Inversion or the Inversion of Representation.” When not hosting dinner parties in his elegantly minimalist Upper West Side apartment, he fills his social calendar with gallery openings, museum exhibits, and meals at fashionable Manhattan restaurants. Still, bad trouble looms: his standing at the university is challenged when his politically correct colleagues protest that a white male lacks the moral authority to chair the department. They also suspect him as a Jew who, while known to protest Israeli policies, does not display quite as great a passion as theirs for the Palestinian cause. Satire, or realism? It is fair to ask.

At the same time, Habayit asher neḥerav is a novel of domestic life or, more accurately, post-domestic life: a probing and somber depiction of divorce. Although Cohen seems to enjoy his bachelor life, and has acquired a girlfriend half his age, he dreams frequently, even yearningly, of his ex-wife, and slowly comes to comprehend the emotional damage his decision to leave has caused her and their two daughters, not to mention the psychic rootlessness to which he has consigned himself. Notes of sadness and loss creep in gradually, as when Cohen finds himself wondering what became of his old wedding ring:

The last time he saw it, it lay in a little box in the top drawer of the end table in the living room. Probably still there. You don’t throw out wedding rings, right? Antique stores are full of them: old gold rings, smooth or carved, studded with diamonds or inlaid with sapphires, engraved with old-fashioned names in scrolling letters, names whose bearers haven’t been among the living for a long while. Not worth melting down; the metal has minimal value. People will buy them, perhaps even use them as wedding rings. How strange, such ghost weddings, the living wearing the dead.

Third, the novel is a horror tale, its creepiness quotient lying somewhere between Henry James’s The Turn of the Screw and a David Cronenberg movie. In what constitutes the book’s main plot line, Cohen is visited by increasingly hideous visions having to do with the ancient Temple in Jerusalem, destroyed by the Romans in 70 CE. Our protagonist may be a third-generation American and an indifferent bagels-and-lox Jew, but his name—Cohens are descendants of the ancient Israelite priesthood—has claimed him with atavistic force. Initially, he suffers hallucinations of the Temple’s sacrificial rites; these soon evolve into an acute sensitivity—experienced as a series of skin conditions, bizarre allergies, and inexplicable mood swings—to non-kosher food, pagan imagery, and ritually impure bodily discharges. (One night, sensing a monstrous presence in the room, he awakes to discover the sheets stained with his girlfriend’s menses; even after she removes the offending sheets, the blood “was still palpable, frightening and repulsive, as if the entire room were tainted.”) By the end of the novel, now in the grip of mental and physical breakdown, he envisions ghastly images of Jerusalem ablaze, the heads of tender babes dashed upon its walls.

So far, the questions raised by Namdar’s novel seem to arise out of the anxieties and fragile condition of many an introspective urban liberal, Jewish-style. What has been lost in the rush to slough off or repudiate traditional forms of sanctity and community? Why are we yet haunted by phenomena we thought safely relegated to the attics and storage lockers of human experience? Among its many charred and smoldering rooms, the “destroyed house” of the title contains the desiccated yet doctrinaire thought-system propagated by the postmodern academy, the imploded state of contemporary marriage, the terror of living in a godless world. But in the end Namdar has more particular concerns, which fully inhabit the fourth and most important strand of his novel.

Above all, Habayit asher neḥerav is a keenly observed meditation on the failing inner resources of American Jewry at the dawn of the 21st century. What Namdar’s novel asks is whether American Jewry is another house on fire. To this, his answer is equivocal.

Before getting to that answer, we might briefly consider two literary parallels to the enterprise of this book. Almost inevitably, Habayit asher neḥerav recalls the work, and the temperament, of late-period Saul Bellow, and indeed it includes a telling reference at one point to Mr. Sammler’s Planet, Bellow’s fiercely unblinking threnody to Western civilization circa 1970. Yet its truer precursor may be another Hebrew novel that is also set in New York City: Shimon Halkin’s 1945 Ad mashber (“Before the Crash”). Halkin, a poet, novelist, and scholar who lived mainly in the United States from 1914 until 1949, when he was appointed to a professorship at the Hebrew University in Jerusalem, similarly explores the psychic crises of his Jewish characters and, by extension, the American Jewish community. In another common feature, both Ad mashber and Habayit asher neḥerav offer lyrical paeans to Manhattan even as they grimly survey the crumbling topography of American politics, race, and spiritual and erotic life.

Unlike Halkin, however, Namdar gives his novel a partially redemptive ending, holding out the possibility of an American Jewish restoration. Several times, Andrew Cohen notices an Israeli who bears a more than passing resemblance to Namdar himself, and, though they never meet or speak, at one point the American professor is struck by the “absurd thought” that this anonymous Israeli “holds some kind of key to the perplexity lately filling his life.” Resorting to a different literary mode, Namdar also offers a charming faux-rabbinic tale of his own devising that renders Cohen’s tribulations as necessary but temporary payback for a sin committed by an ancestor 2,000 years earlier. In interviews, Namdar has explicitly voiced the hope that American Jews, including his own wife and children, might one day be able to read and heed the message of his book, if not in the original then at least in translation.

The hope is assuredly noble, if all but belied by the accumulated record of spiritual and psychic fissure that fills the 500 pages of Namdar’s novel. Indeed, it is difficult to put down this book without concluding that the troubles besetting American Judaism are in no way comparable to a residual attack of ancient bad karma that might pass like a breaking fever. Whether or not his intended readers will ever be able or willing to hear or heed his words, however, Reuven Namdar’s great Israeli and American Jewish novel shows that he has been listening with stunning fidelity to theirs.