The Girl with the Yiddish Tattoo

A near-indecipherable tattoo on a woman’s leg helps unravel a mystery surrounding the 1943 anthem of the Jewish resistance. 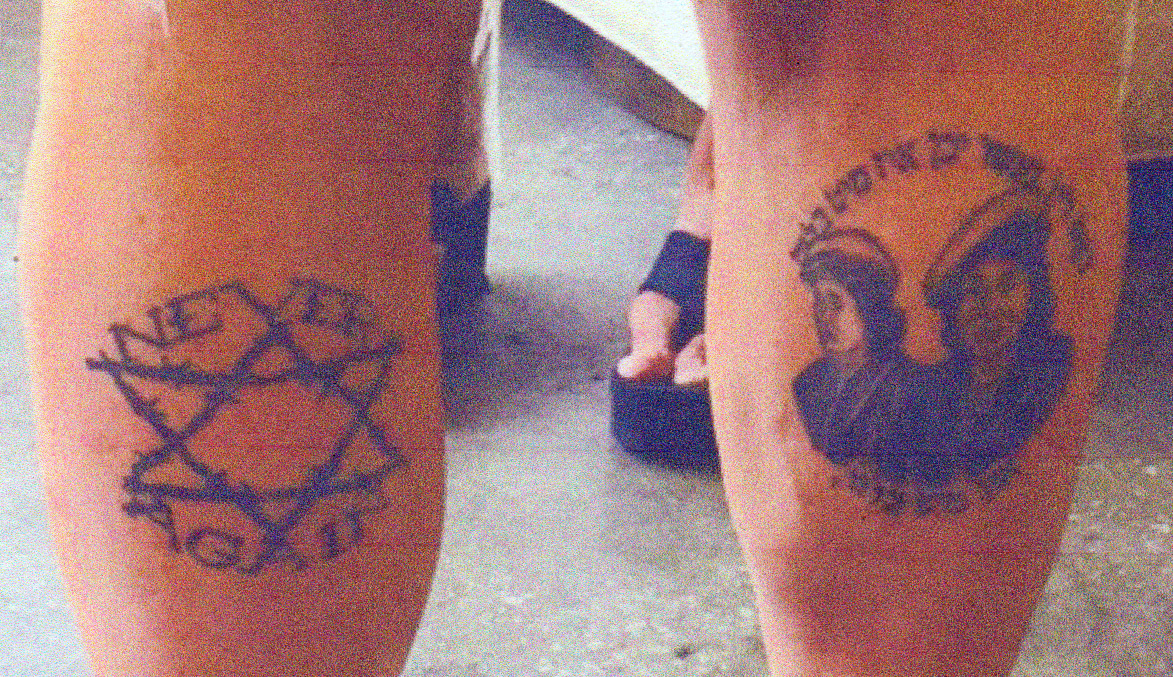 The legs of a “feministically inclined Jewish patriot.” Philologos.

The photograph of a tattooed pair of women’s legs appearing atop this column was e-mailed to me by a friend after having been sent to him by an acquaintance who’d taken it in New York. The legs—belonging, apparently, to a feministically inclined Jewish patriot—bear three inscriptions. On the left calf are “Never Again” and a barbed-wire Star of David. The left ankle (not pictured here) has two words in Hebrew or Yiddish that I can’t make out. On the right calf are the faces of two young women wearing military-style berets and lettering that, though  a bit difficult to decipher, spells the Yiddish words dos lid geshribn iz mit blut, “the song is written with blood,” above the faces, and un nit blay, “and not lead,” beneath them. Or is it, on the contrary, un mit blay, “and with lead”? It’s hard to tell—and thereby hangs a tale.

The words of this tattoo come from the well-known song Zog nit keynmol az du geyst dem letztn veg, “Never say the road you’re on will be your last,” also known as the Partisans’ Song. Written in the Vilna ghetto in May 1943, it quickly became the anthem of anti-German Jewish partisan units all over Eastern Europe. After the war it was widely performed and recorded, and it continues to be sung in various languages at Holocaust commemorations and other events to this day. In its accepted version, the fourth of its five stanzas goes:

A more or less literal translation (there are several poetic ones) is:

This song is written with blood and not with lead,
It’s not a song sung by a bird that’s flying free,
The people singing it is ringed by falling walls,
And sings it with a pistol in its hands.

The tattooer, it would seem, whether inadvertently or because given an erroneous version to copy, made a mistake in the stanza’s first line by omitting either mit, “with,” or nit, “not,” before blay, “lead.” In the first case, the line’s meaning would remain the same but its scansion would be harmed by losing a syllable, thus laming the last of its five beats. In the second case, the scansion would again suffer—and the line’s meaning would also be reversed.

And yet there would be, I must say, a logic in such a reversal, because the line in its accepted version doesn’t quite make sense. If you’re singing with a pistol in your hand, why say your song is sung only with blood and not also with the lead of bullets? Or is it possible that the lead referred to is not that of bullets but of the written word? Movable print, after all, was traditionally cast in lead, and the Yiddish word for a pencil is blayshtift, literally a “lead pin.”

The song’s lyricist, Hirsh Glik, did not survive to be asked these questions. A twenty-one-year-old Vilna poet at the time he wrote it, he was apparently killed by the Germans a year later (there were no actual witnesses to his death), in the summer of 1944. Taking the music from a song composed by the Jewish brothers Dmitry and Daniel Pokrass for the 1937 Soviet film Sons of Working People, Glik wrote Zog nit keynmol‘s words under the impact of the Warsaw ghetto revolt, which broke out in late April 1943. A similar revolt was being planned for the ghetto in Vilna, and according to Glik’s fellow Vilna Yiddish poet Shmerke Kaczerginski, who later escaped to join a Jewish partisan unit, Glik was at the time “breathing an atmosphere of grenades and guns.”

This certainly suggests that the lead of stanza 4 is that of bullets. Indeed, there has always been reason to suspect that mit blut un nit mit blay may not have been Glik’s original words, because when Zog nit keymol was translated into its classic Hebrew version in 1946 by the poet Avraham Shlonsky, the stanza’s first line was rendered as Bi-khtav ha-dam ve-ha-oferet hu nikhtav, “It’s written in the script of blood and lead.”  Was this what Glik actually wrote, which was subsequently changed? Or was it Shlonsky who changed Glik’s words for reasons of his own?

I now know the answer, supplied to me by the Yiddish scholar and literary critic Ruth Wisse, who needs no introduction to Mosaic‘s readers. Ruth was a close friend, until his death five years ago, of the great Yiddish poet Avraham Sutzkever—who, though not a native of Vilna, was in its ghetto, too, when Zog nit keynmol was written, after which he escaped with the same group as did Kazcerginski and fought together in the forests with him. In the course of our e-mail exchange, she wrote me: “According to Sutzkever, the line was originally written as Geshribn iz dos lid mit blut un blay, ‘blood and lead,’ not as it later came to be sung. He was quite insistent about this.”

Shlonsky’s translation, then, was accurate. But it’s more complicated than that, since after his escape from the ghetto, Sutzkever wrote a marvelous poem titled Di blayene plate fun Roms drukeray, “The Lead Plates at the Rom Press,” in which he describes, in preparation for an uprising, participating in melting down the lead letters of a Vilna printing establishment known for its elegant editions of the Talmud and recasting them as bullets. Part of the poem—in Yiddish the lines are metrical and rhymed—reads (in Neal Kozodoy’s translation):

Letter by melting letter the lead,
Liquefied bullets, gleamed with thoughts;
A verse from Babylon, a verse from Poland,
Seething, flowing into the one mold.
Now must Jewish grit, long concealed in words,
Detonate the world in a shot!

For Sutzkever, then, not only did Glik’s song speak of blood and lead, but the lead was that of bullets and printed words—or more precisely, of words turned into bullets. If Glik wrote Zog nit keynmol at the time the lead letters were being recast, he must have thought of it this way, too—but here the plot thickens once again. Although Sutzkever gave his poem the subscript “Vilna Ghetto, September 12, 1943,” which was the day of his escape to the forests, the Yiddish literary and cultural historian David Roskies writes in his book Against the Apocalypse that the poem was actually written in 1944 and that the melting-down of the letters never took place but was entirely a product of Sutzkever’s imagination. If that’s so, Glik may have been thinking only of bullets after all.

Why, when, and where were the song’s words altered to what they are today? Possibly, the instrumental figure was Paul Robeson, the pro-Communist African-American vocalist who was idolized in the 1940s and 1950s by the American and international left. Robeson sang Zog nit keynmol in both Yiddish and Russian to a large audience in Moscow in 1949 (this may have been the last time that Stalin’s regime permitted any public expression of pro-Jewish sentiment), and the Yiddish version he sang, as can clearly be heard in the recording made of it, had blut un nit mit blay, “with blood and not with lead.” Could he (or someone else) have changed the line to make it more palatable to the Soviet authorities by toning down its Jewish militancy, and could his version, due to his popularity, have supplanted the older one?

Perhaps. Yet one needn’t resort to conspiracy theories. The words of folksongs—and in effect this is what Zog nit keynmol has become—change all the time as they are sung and transmitted. I myself have more than once had the experience of looking up the lyrics of some folk song I sang when young, only to discover that the words differed considerably from the ones I remembered. Zog nit keynmol could have changed spontaneously in this way, too. It has changed again on the legs of our tattooed woman, possibly back toward its original version, although not in a way that can easily be sung to its melody.

The Girl with the Yiddish Tattoo