What Does an Acclaimed Israeli Sci-Fi Writer Have to Tell Us about the Israel of Tomorrow?

Nothing much, and nothing good. 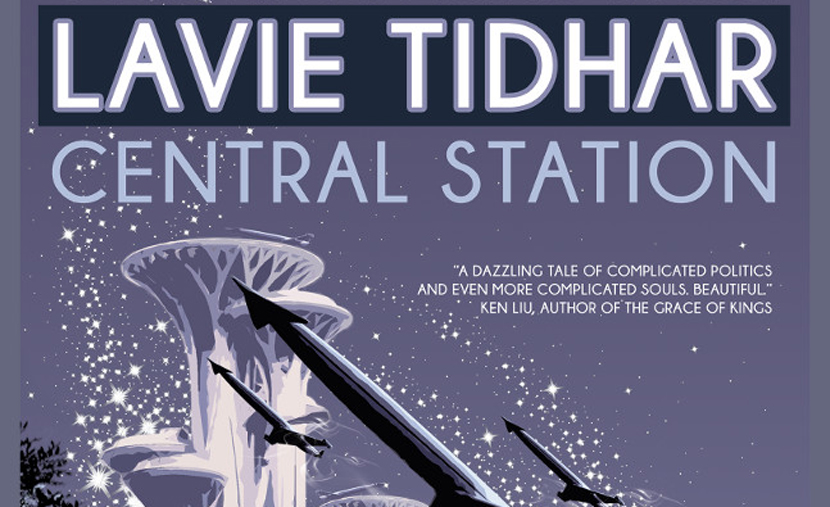 From the cover of Lavie Tidhar’s Central Station. Tachyon.

The “central station” in Central Station, a new futuristic novel by the award-winning Israeli science-fiction writer Lavie Tidhar, is a sprawling zone of contrasts: a labyrinthine meeting ground for Jews and Arabs, Asian immigrants and African refugees, criminals and musicians, religious seekers and drug addicts, collectors of local detritus and vendors of knock-off merchandise from distant lands. In other words: pretty much Tel Aviv’s real-life central bus station circa 2016.

To this familiar Tel Aviv scene, however, with its characteristic mix of squalor and charm, Tidhar has added cyborgs, chip-implanted virtual realities, genetic manipulation, and spacecraft. Which raises the question: are these sprinklings of sci-fi tropes and cues and gizmos meant to tell us something important that Tidhar wants us to know about the Israel of the far future, or for that matter of today?

The answer is no—at least not in any discernible way. So what’s up with them, and with their much acclaimed author? This requires a deeper look.

The grandchild of Holocaust survivors, Tidhar was born in 1976 and grew up on a secular kibbutz before moving to South Africa at the age of sixteen. Rather than returning to Israel for his army service, he decided to continue living abroad, residing for a time in southeast Asia and now making his home in London. Not only an expatriate, at some point along the way he also made the strategic decision to conduct his career as a writer in English rather than in his native Hebrew. By now he is the author of a dozen novels and a busy editor of anthologies of international sci-fi stories and novelty collections like Jews Versus Zombies. In 2012, he won the prestigious World Fantasy Award for his novel Osama—which offers as good a place as any to begin an investigation of his work.

A detective thriller, Osama is set in an alternate universe in which Osama Bin-Laden, and terrorism generally, are the stuff of pulp fiction even as the environment around them is haunted by the ghosts of those who fell victim to terrorist atrocities in our own, real world. The concept is intriguing: after all, before September 11, 2001 actually happened, the awful events of that day might indeed have seemed unimaginable except as something out of a disaster movie or a particularly gruesome spy novel. Yet, even as he floats a suggestion of this kind, Tidhar does not appear to intend anything by it, beyond adding a dollop of faux-seriousness to what is an otherwise atmospherically engaging but ultimately shallow novel.

And this, it turns out, is his trademark—not exactly a shtick, more like a tic. Thus, A Man Lies Dreaming, his most recent novel prior to Central Station, is another alternate-history detective novel in which the private eye is—Adolf Hitler. Why? Well, why not? Reviewing this morally slapdash work in the New York Times, Daphne Merkin could not help asking: “What did the Holocaust do to deserve this?”

And then there is Martian Sands (2013), a “prequel” to Central Station that is set on a Mars that has been colonized by Israelis (and other terrestrial peoples). In a clever nod to the Martian adventure stories written early in the last century by Edgar Rice Burroughs, a number of these colonists believe they are the reincarnated spirits of Mars’ original inhabitants, Burroughs’ green-skinned, four-armed avatars of a warrior civilization. But Tidhar describes them instead as a bunch of nebbishes who only fancy themselves to be mighty Martian warriors. A cynical inversion, perhaps, of the Zionist dream of a return to ancestral origins? Not so: once again, a thematic thread is taken up only to be abandoned among a host of other developments—time travel, alternate history, the Holocaust (why not?)—each one as vaguely conceived as are the novel’s interchangeable characters, and none of it mattering anyway.

Which takes us in turn to the new novel, Central Station. Among its handful of characters in the Tel Aviv of the future, we meet a robot who is also an IDF veteran, a cyber-vampire that feeds on the data chips implanted in human beings, and a character who may be the messiah. The Arab countries seem finally to have accepted the existence of Israel; the Palestinians, too, have a state, nestled peacefully alongside the Jewish one. Meanwhile, the novel skips casually from one theme to the next, developing neither the implications of any idea nor the individuality of any character.

In sum: portentous themes deployed gratuitously, stock literary devices that totter between homage and mere derivativeness, prose of often crackling verve that fails to atone for two-dimensional characters. If Tidhar were really the sum of what Israel has to offer in the realm of science fiction, we could end here.

Thankfully, that’s not the case. As I’ve documented elsewhere, Israel in recent years has been blessed with a bounty of worthy offerings in the realms of fantasy and science fiction; there’s even a special annual award for the best original work in the category. But these books are in Hebrew, and Lavie Tidhar, who writes in English, is the holder not of Israel’s Geffen award but of the World Fantasy Award—which means that his words resonate in a wider universe of discourse. And so the question recurs: when he isn’t merely playing hide-and-seek with vague fictional gestures like Israelis on Mars, Hitler as private eye, and so forth, what is he trying to tell us?

As it happens, an abundance of clues is provided in another new volume, aptly named Art and War, in which Tidhar has teamed up with the Israeli poet and fantasy novelist Shimon Adaf for a conversation on the virtues, and the defects, of their common genre. The dialogue has its amusing moments. At one revealing juncture, Tidhar confesses that he’s not altogether at ease in the sci-fi form. Making him especially impatient, he says, is its emphasis on following the implications of a concept: “who the hell wants to read endless ideas?” The confession speaks volumes.

And yet, if ideas are uncongenial to Tidhar, he is positively brimming with attitudes. And so too, it turns out, is Adaf, who writes in Hebrew and who on literary matters can be strikingly insightful, not only about his craft but about the ability of the Hebrew language itself to release psychic energies usually associated with religion. (“Words,” he tells Tidhar, “are ominously beautiful because they carry with them echoes from the times we could surrender to the feeling that language did capture a deeper sense of reality.”) Regrettably, however, in much of Art and War both authors retreat from literary topics into political posturing, in the process disclosing a shared and all too predictable callowness.

Tidhar, who seems to believe he is the first writer to whom it has ever occurred to challenge Israel’s national myths, descends into bumper-sticker banalities. Laments this comfortably London-based Israeli: “Why is it good to die for our country? Wouldn’t it be better to live for it?” And Adaf, otherwise capable of a refreshing impatience with Israeli identity politics, chimes in with his own helpings of stale indictment. “The Holocaust,” he intones, channeling tired anti-Zionist propaganda, “has become the number-one indoctrination tool in Israel, second only to racism.” Tidhar hastens to agree: “We can justify anything with the Holocaust. It disgusts me. Did we learn nothing? Did we not learn, at the very least, some compassion? What is Gaza if not a ghetto?”

Then these two decorated and widely published authors proceed to commiserate each other over being silenced and marginalized for their brave, lonely stand against that great enemy of free expression, the state of Israel.

If there is anything edifying in the career of Lavie Tidhar, it may lie in the cost exacted by his leaving not only his country but his language. Not that he’s unique as an Israeli writing in English: in the last years, Shani Boianjiu and Ayelet Tsabari have each garnered praise for debut books in English, though neither holds a candle to the recent Hebrew-language fiction by the Israeli ex-pats Ruby Namdar and Maya Arad. In the case of Tidhar, however, the switch to English seems deeply of a piece with the cryogenically frozen posture of an angry teenager.

Tellingly, Central Station is at its best and uncharacteristically touching in moments when it gives expression to a simply observed and decidedly non-futuristic yearning for Tel Aviv as it is:

Yet honest realism of this sort apparently serves neither Tidhar’s literary ambitions nor his off-the-shelf politics; it may, indeed, be antithetical to both. “I have things I want to say,” he announces portentously in Art and War, “big themes I want to explore. The question of Israel and Palestine and competing histories, warring histories, is one. The question of God, of why we are here, is another.” And: “I still want to write a kibbutz novel. It would be a Western.”

What Does an Acclaimed Israeli Sci-Fi Writer Have to Tell Us about the Israel of Tomorrow?