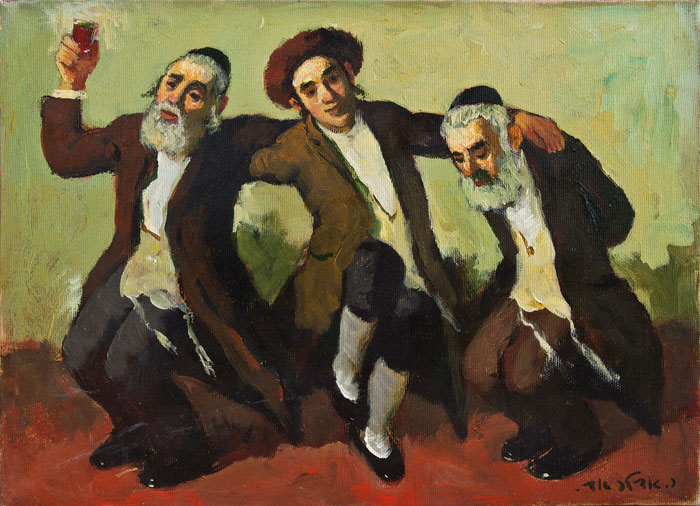 I’m very curious about an expression that I’ve been hearing increasingly frequently. Referring to someone who has died, a speaker might say, “Today is my mother-in-law’s ninth yortsayt. May her n’shamah [soul] have an aliyah.” In my experience, use of this expression is by no means limited to Orthodox Jews. With its implied analogy of a rewarded afterlife to being called up to the Torah or to settling in Israel, it sounds bizarre to me, yet the folks who use it seem totally oblivious of this. What can you say about its origins?

While I’ve never encountered such an expression myself, it certainly seems as bizarre to me as it does to Rabbi Perkins. Its origins, however, don’t seem difficult to explain. The Hebrew noun aliyah, “ascent,” comes from the verb ’alah, to ascend, and was traditionally used by rabbinic Hebrew both for being called up to the Torah in synagogue and for settling in the Land of Israel.

Originally, these terms were physically descriptive ones that had nothing to do with the sense of religious or personal fulfillment that they later acquired. One ascended to the Torah because the bimah, the raised podium on which the Torah was read, was higher than the rest of the synagogue. One ascended to the Land of Israel because traveling to it, in the days in which the world’s largest Jewish community resided in Babylonia, meant journeying by land from the flat terrain of the Fertile Crescent to the hill country of Palestine. The two terms were never confused in rabbinic Hebrew because neither was used by itself. Being called up to the Torah was always an aliyah la-torah, never just an aliyah, and by the same token, settling in the Land of Israel was an aliyah l’erets-yisra’el.

In post-biblical Judaism, as in other religions, the journey of the deserving soul in the afterlife was also conceived as an ascent, one made to heaven and its sheltering God. Moreover, the same root of ’alah was applied to it as well. And yet the noun by which such an ascent was referred to was not aliyah, which belongs grammatically to what is known as the kal construction, but iluy, which belongs to the pi’el construction. Thus, in some (mainly Ashkenazi) versions of the el maley raḥamim, the “Lord Full of Mercy” prayer recited at the graveside at funerals, at memorial gatherings, and in the afternoon service on the Sabbath before a yortsayt, the prayer leader sings or chants:

Lord full of mercy who dwells on high, grant perfect peace beneath the wings of your Presence, among the holy and the pure who shine with the splendor of the firmament, to the soul of ______, who has departed this world. Wherefore we pray for the iluy of [his or her] soul, may its resting place be in paradise.

Hebrew does also have the expression aliyat n’shamah, but it means something else. An aliyah of the soul is a life experience, not an afterlife experience. The term designates a mystical or trance state in which the soul ascends to heavenly heights while still inhabiting the body, to which it returns.

This concept played a role in early Ḥasidism, whose founder, the Baal Shem Tov, described such an experience in a letter, known in ḥasidic lore as “the holy epistle,” sent to his brother-in-law Gershon of Kutov. In it, the Baal Shem wrote:

On Rosh Hashanah, in the year 5507 [1746-47], I performed incantations for an ascent [aliyah] of the soul and saw things more wondrous than any seen by me since the day I became aware. . . . I ascended from rung to rung until I entered the palace of the messiah in which he was studying the Torah with the great rabbis and the saints and the Seven Shepherds [in Jewish mysticism, the biblical figures of Adam, Seth, Methusaleh, Abraham, Jacob, Moses, and David]. There was, I saw, a great rejoicing, the reason for which I did not know, and I thought, God forbid, that it might be because I had departed this world [and was being welcomed into paradise]. I was then told, however, that it was not time for my death because great pleasure was taken above in the unifications [yiḥudim or kabbalistic meditations] that I performed below according to the holy Torah, so that I do not know to this day what the reason for all that joy was.

The Baal Shem Tov’s soul had an aliyah, not an iluy. Yet in the minds of some American Jews, according to Rabbi Perkins, these two terms have become confused and merged, so that an aliyat n’shamah is now understood to be the same thing as an iluy n’shamah. Why this should have happened, I can only speculate. Perhaps it is because, to Jews with little or no Hebrew, aliyah is a known word and iluy is not, so that the former is now used in place of the latter. Perhaps it is because mystical trance states are no longer goals of Jewish religious practice even in Ḥasidism, so that an aliyah of the soul can only suggest a post-death experience. Perhaps there is some other determinant.

In American Jewish English, “aliyah” as an honor bestowed in a synagogue and “aliyah” as a choice of residence in Israel are disambiguated by a syllabic stress that also affects the final vowel: in the first case, one says “ah-LEE-yeh,” as the word is pronounced in the Ashkenazi Hebrew of Eastern Europe; in the second case, “ah-lee-YAH,” as per the Hebrew of Israel. I would be interested in hearing from Rabbi Perkins (who presides, curiously, at Temple Aliyah in Needham, Massachusetts), where the stress falls in the “aliyah” of a departed soul. And I would also be interested in hearing from any of you who have come across “aliyah” used in this way. Who, sociologically, are the expression’s users? How long has it been in use? Does it seem to be spreading? Please let me know what you know about it.