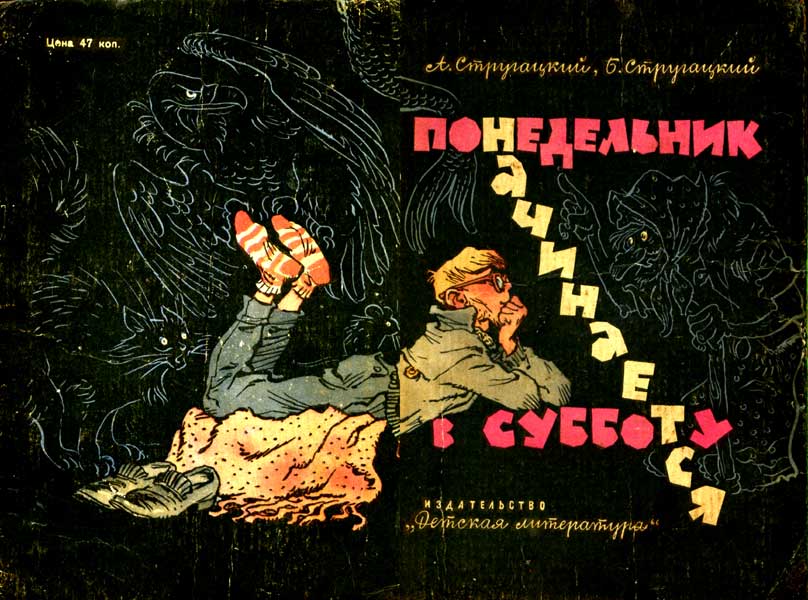 The jacket of the Russian edition of Monday Starts on Saturday by Arkady and Boris Strugatsky. Wikipedia.

Deified by their Soviet readers from the 1960s on, the Strugatsky brothers—Arkady (1925-1991) and his younger sibling Boris (1933-2012)—were not only the most popular and prolific Russian writers of science fiction, a highly respected genre in post-Stalinist Soviet culture, but its most daring practitioners. Translated widely during the cold war, their work was continually on the radar of American science-fiction writers from Isaac Asimov to Ursula Le Guin to Kim Stanley Robinson.

With the recent advent of new and improved English translations, the latest of which is Monday Starts on Saturday, increasing numbers of American readers have become familiar with the brothers’ genre-crossing output, which ranges from adventure and mystery to dystopias, parables, and parodies, all playing off the staple science-fiction themes of time- and interplanetary travel, the nature of AI, and the existence of alternative “matrix” realities.

How the morose and hard-drinking Arkady, by training a translator from Japanese, and the talkative and approachable Boris, with his degree in astrophysics, actually wrote their 30 books together remains something of a mystery, but there is no doubt that every sentence was composed in tandem. Even more intriguing is their progression from true believers in the Communist cause—their early works envision a triumphant Communist future in the 22nd century—to doubters and finally radical (albeit subterranean) denouncers. As Boris put it in a post-Soviet interview, their first disagreements with the regime were of a “stylistic nature.” But once the differences deepened, bringing grave problems with Soviet censors, they had to design new methods of getting into print. Their general strategy, in Boris’s account, was to write in a way that would cause their editors’ hair to stand on end but not scare them enough to turn a manuscript over to the “appropriate organs.”

The tactic was hardly fool-proof. Some novels had to be published in truncated versions; others were smuggled to the West or remained hidden for decades in manuscript form. This is especially true of their best books—coded allegories that function simultaneously as covert political tools for undermining the system and thought experiments with prophetic undertones. Their mantra (again in Boris’s words) was: “Let’s make it similar to Kafka, so that reality will imperceptibly cross over into delirium.” The mature Strugatskys, ironic, elitist, absurdist, and tragic, come across as deeply pessimistic about humanity’s potential and about any idea of progress or enlightenment. A profound suspicion of utopian schemes does double duty as acceptance of the status quo, unsatisfying as it may be.

If politics is one inescapable thread in their works, Jewishness is another. There was no dearth of Jews among Soviet science-fiction writers and filmmakers, yet the Strugatskys, sons of a Jewish father and Russian mother, occupy a unique place. In an environment where Judaism had been all but destroyed, and a public Jewish presence delegitimized, reading, for many Soviet Jews, provided an entry to communal memory and identity. The typical Soviet Jewish “bookshelf”—a makeshift Jewish heritage—consisted of a few translated works from Hebrew and numerous translations from Yiddish and German, prominently including the historical novels of Lion Feuchtwanger as well as Russian books with noticeable Jewish content. Such volumes, often officially published, and not intended solely for a Jewish audience, afforded an opportunity for Soviet Jews to indulge insubordinate feelings in a largely safe manner.

On this Soviet Jewish bookshelf, the Strugatskys occupied an integral place. Indeed, there’s scarcely a major work by them that does not address Jewishness in either a veiled or direct way, from central characters to biblical, talmudic, and kabbalistic allusions to commentary on the Holocaust and anti-Semitism.

In a manner reflective of their own personal situation, the Strugatskys are particularly captivated by what happens when a Jew gets close to a seat of power intent on diminishing and nullifying him. In The Doomed City, their masterpiece, completed in 1972 and published almost twenty years later, the Jew Izya Katsman transforms himself from a political prisoner into an adviser to the former Nazi Fritz Heiger. Even in this precarious situation, Izya insists on retaining his sense of pride and selfhood. “I’m not your Jew. . . . I’ve told you a hundred times that I’m my own Jew,” he indignantly blurts out to Heiger.

Here a particularly Soviet and Russian dilemma—the fraught relationship between the intelligentsia and dictatorial power—is intertwined with a quintessential crisis of Jewish diaspora existence, embodied for the Strugatskys in the phenomenon of the “court Jew.” Viewing their surrounding reality as a “dictatorship of mediocrity over cretins,” the brothers search for the select few, preeminently Jews, who can resist. Although themselves avowedly secular and assimilated, they thus paradoxically tie themselves to the biblical idea of chosenness.

Monday Starts on Saturday, deftly translated by Andrew Bromfield, is considered (not altogether correctly) to be the Strugatskys’ last optimistic novel. Published in 1965 at the end of the liberalizing period of the “thaw,” which sparked a renaissance in literature and the arts, it is often seen as embodying the period’s free spirit—and quickly became a beloved text with a truly cult following.

The novel, in three parts, traces the adventures of Alexander Privalov, a hip computer scientist from Moscow who is recruited to work in the National Institute for the Technology of Witchcraft and Thaumaturgy. The institute is filled with characters out of Russian folk tales and other mythologies, from Merlin to werewolves to basilisks. The novel’s first part revolves around a mysterious sofa, which, as Privalov learns, turns a magical dream world into reality. In the second part, which takes place on New Year’s Eve, Privalov is left to watch over the supposedly empty institute but instead finds it bustling with supernatural activities, one of which results in the creation of an artificial man of gluttonous appetites. In the final part, Privalov travels into the virtual reality of an imagined future, becoming embroiled in an attempt to discover the mystery of the institute’s director, who exists as two people in one body. Monday Starts on Saturday ends with Privalov’s “own” postscript and commentary, together with a dictionary of magical terms and characters.

Needless to say, Monday Starts on Saturday is humorous and playful, impishly evoking the similarity between its magical institute and Soviet scientific centers. Yet the lightheartedness is also deceptive, which is what makes the novel inherently subversive. Here the Strugatskys emulate their great 19th-century literary antecedent Nikolai Gogol, in whose works humor quickly turns grotesque, diabolical, and disparaging of anything human. The novel’s epigraph, from Gogol’s famous short story, “The Nose,” captures its absurdist undercurrent: “But what is strangest and most incomprehensible of all is how authors can choose such subjects. I confess I find this totally incomprehensible, it is as if . . . no, no, I don’t understand it at all.” As Adam Roberts perceptively points out in his preface, Monday Starts on Saturday, too, is “written in a way that deliberately confounds the reader’s expectations, more P[hilip] K. Dick than J.K. Rowling.”

The Strugatskys’ turn toward Russian fairy tales is not accidental. On the one hand, folk material was universally familiar to Soviet readers (which is why the English edition would have benefited from footnotes); on the other hand, the Soviet propaganda machine itself consistently relied on folk tales to validate official visions of the promised bright future. It’s noteworthy in this respect that, simultaneously with Monday Starts on Saturday, the brothers were composing their first truly pessimistic text, Hard to be a God, which conveyed the incurability of the Soviet regime by allegorizing the downfall of the hopes associated with the thaw.

The Jewishness of Monday Starts on Saturday is pivotal here as well.

“Our work deals with human happiness,” the wizards tell Privalov at the institute. Redolent of Soviet slogans, this statement is ironic, satirical—but also genuine when seen in the book’s Jewish context. The success of the wizards’ endeavors depends on rediscovering the secret of the “White Thesis,” devised (we’re informed) by the 16th-century Prague rabbi Judah Loew, creator of the Golem. The white thesis is predicated on living for the sake of higher knowledge and cosmic mysteries; happiness, for it, “lies in the constant cognition of the unknown, which is also the meaning of life.” In contrast to Marxism, there’s nothing utilitarian or materialist about the wizards’ quest. If anything, it is redolent of religion, Marx’s “opiate of the masses.”

Indeed, it emerges that not all wizards at the institute are created equal. The select few—the symbolic Jews—are able to sustain the contemplative life; others collapse under its weight, their ears covered in fur; and some, “like spiders,” are set to labor on “the construction of a bright future in a single apartment and on a single village plot, fenced off from the rest of humanity by electrified barbed wire.”

Soviet censors must have been truly inattentive (or on the same wavelength as the brothers) to let this last sentence slip by, for in it the Strugatskys explicitly condemn the very core of Soviet ideology and the goal of creating a Communist society—that is to say, a repressive dictatorship—in one specific country. And that’s not to mention its thinly-veiled references to the communal apartments, collective farms, and forced-labor camps that for so many embodied the miseries of the Soviet experience. It’s not fortuitous that the town where the institute is located is called Solovets, which sounds close to Solovki, the infamous prison camp labeled by Alexander Solzhenitsyn “the mother of the Gulag.”

In the novel’s final section, Privalov and his wizard companions figure out the principle of countermotion—moving back in time. The institute’s director, the person mysteriously living as two people in one body, is discovered to exist perpetually in this state: receding farther and farther into the past, he “has no bright future,” but only “serfdom” and “oprichnina” (the name of the Tsarist secret police). Countermotion, in other words, is the Strugatskys’ judgment on Russian history and on, despite momentary interludes of reprieve, its never-changing attachment to terror: thaw or no thaw, the Soviet Union slides constantly toward its damned Russian and Stalinist origins.

Why, then, did I say earlier that Monday Starts on Saturday is considered the Strugatskys’ “most optimistic novel”? Because there is an alternative to the relentless de-evolution, and it, too, is embodied in the novel’s Jewishness.

This is where the book’s title comes in. According to Boris, the phrase was facetiously suggested to them by a friend as a good title for a Hemingway novel—Hemingway being one of their generation’s main idols. The Strugatskys loved the phrase because it was both “hopeless and . . . devilishly human,” suggesting that there’s no holiday, no day off, in human life—yet also that, despite everything, there’s a possibility of hope.

On the surface, the title speaks to the wizards’ constant desire for work; they labor even on weekends. (In the Soviet Union at the time, Saturday was a working day; the five-day work week would not be introduced until 1967.) When seen in the Jewish context, however, the title takes on symbolic meaning: just as the white thesis originates in the Jewish mind of Rabbi Loew, so the wizards’ search for true happiness originates in the idea of the Jewish Sabbath. In moving “back” from Monday to Saturday, the wizards sanctify and revive a life mesmerized by and aspiring to the “constant cognition of the unknown.”

It is this allegorical Jewish layer of meaning that makes Monday Starts on Saturday the Strugatskys’ most hopeful work—as well as one of the most esoteric and misunderstood texts of modern Russian literature.