The First-Ever Anthology of Israeli Science Fiction and Fantasy 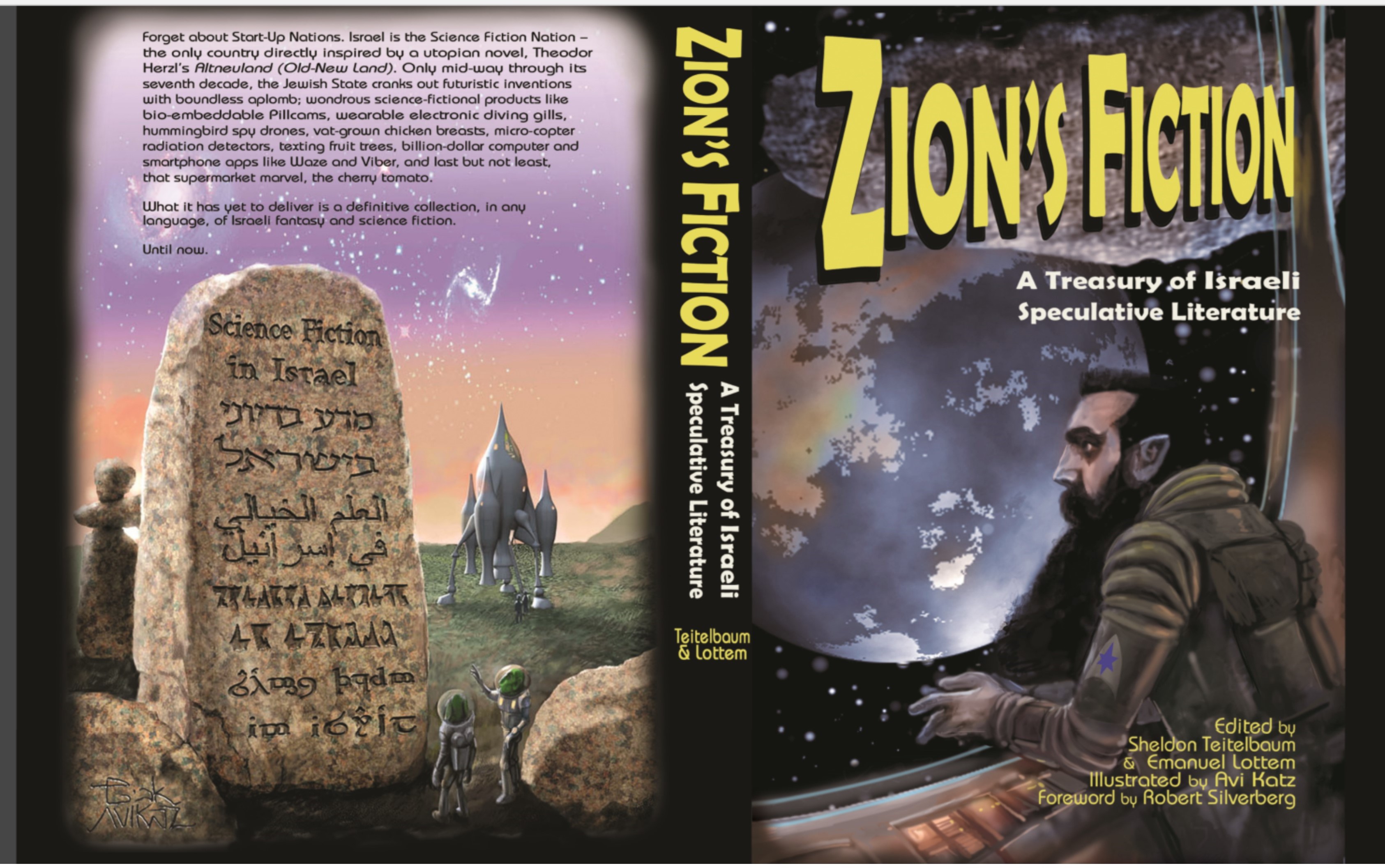 Of the making of anthologies there is no end. But not all anthologies are equal—and what is true in general is true also of anthologies in specific fields of endeavor, like the field of literature, not to mention that field’s various genres and their subdivisions.

What prompts these vague pronouncements is the appearance of the first-ever anthology of one particular literary subdivision: stories, by contemporary Israeli authors, in the areas of science fiction and fantasy (SFF). Whether or not you like the pun in its two-word main title—try saying it quickly—Zion’s Fiction: A Treasury of Israeli Speculative Literature is an impressive English-language collection of stories originally written in either Hebrew or English. It includes tales of invasions both alien and angelic, dystopias in which childrearing is outlawed in favor of technologically produced adulthood, a marriage between Death and a Jerusalem maiden, and other inventive imaginings.

To grasp the special virtues of this effort, it helps to contrast it with the last major anthology of a similar kind, People of the Book: A Decade of Jewish Science Fiction and Fantasy, published in 2010. Although two contributors to that earlier work were British and two others—the Israeli-born Lavie Tidhar and the Kiev-born Israeli writer and scholar Elana Gomel—also appear in Zion’s Fiction, most of the other contributors to People of the Book were Americans, and so were the volume’s editors. That difference tells, and in what follows I mean to pursue it.

Let’s start where the two books start; their introductions.

The editors of People of the Book, Rachel Swirsky and Sean Wallace, stay behind the scene, leaving their volume’s introduction instead to Ann VanderMeer, a mainstay of today’s fantasy and sci-fi world. Offering her own personal and theological thoughts, VanderMeer stresses what she sees as a simple, unquestionable truth: the continuity between the latest SFF creations by Jewish writers and the stories “we grew up with in the Torah or Talmud.” After all, she writes, if the Bible’s “angels and demons,” “ten plagues,” “the Divine Chariot and a creature with four faces” aren’t “fantastical, then I don’t know what is.” Besides: “What are these ancient writings, really, except stories we tell ourselves?” (What, indeed.)

In Zion’s Fiction, things are otherwise. A brief foreword—a blurb, really—by the great American science-fiction writer Robert Silverberg leads to an extensive essay coauthored by the book’s editors, Sheldon Teitelbaum and Emanuel Lotem, each a long-time contributor to Israel’s SFF scene. Proceeding historically, they describe the obstacles in modern Hebrew and Israeli culture that long delayed a literary engagement with the fantastic: mainly, a societal predilection for focusing on the here-and-now and an accompanying bias against imaginative speculation and fantasy as luxuries the Zionist project could ill afford. They then provide a helpful portrait of recent cultural and political shifts that have helped spark SFF’s flowering.

There are some gaps in Teitelbaum and Lotem’s overview. In his indispensable Hebrew work, From Tarzan to Zbeng (2002), Eli Eshed, Israel’s pulp-fiction expert, cites early and arguably pioneering instances of Israeli space opera and wizards. That aside, however, the new introduction stands as the best English-language critical survey of science fiction and fantasy in Israel.

Next, the stories themselves. Of the twenty selections in People of the Book, three contain golems, three center on dybbuks, three deal with the Holocaust, and several more refer to it. More than a quarter contrive to imagine some aspect of the Yiddish-speaking past, whether through fictive shtetls (as in Jane Yolen’s “The Tsar’s Dragon”) or nostalgic re-configurings of New York City’s immigrant Jewish community (as in Peter Beagle’s story of an angel possessed by a dybbuk). The state of Israel is all but absent from the imaginative landscape of these mainly American stories, except for one alternate history that has the Arabs winning the Six-Day War and occupying the Israelis—who, as a result, become religious fanatics and suicide bombers.

But the most common thematic thread in People of the Book, running through almost half the stories, is Jewish faith itself, both as a subject and as a problem. Some stories are antagonistic, even hostile: Rachel Pollack, for instance, sets up a simplistic dichotomy between the biblical Joseph, a compassionate and open-minded dreamer, and the prophet Moses, a narrow-minded legalist known mockingly as “the Burning Beard.” Others describe, in sometimes sentimental fashion, faith abandoned and then renewed. But most trade in an ironic or indifferent agnosticism. One such tale, which curiously exhibits no overt signs of fantasy, focuses on an American Jewish couple who, ambivalent about circumcising their twin sons, decide to split the difference and circumcise only one.

In the Israeli collection, by contrast, Judaism and religious faith figure as preoccupations in only one angry story that imagines biblical law magically instantiated—requiring, for instance, that homosexuals, or people who eat shellfish, be immediately blasted out of existence. But in general Zion’s Fiction has far fewer shared motifs than does People of the Book, and is much heavier on science fiction than on fantasy. Israeliness itself is worn easily: some stories take place in the country or have distinctively Israeli characters, but in others the characters are at home in a generic sci-fi context and bear Anglo-American names like Alexandra Watson. Nor is Israel usually the subject matter. We don’t get the East European schmaltz of the American volume, and even the Holocaust, while providing an important symbolic framework for a few stories, is never treated directly.

One theme that does run through almost half of the sixteen stories in Zion’s Fiction, and is perhaps the most “Israeli” thing about it, is a palpable concern with the themes of decision, consequence, and alternative life possibilities. In one story, a magic mirror allows one to step through and create a different life; in two others, telepaths inhabit the lives of others in order to rectify mistakes of the past.

Such stories remind us that while Israel can’t boast the longest or most well-developed tradition of modern fantasy and science-fiction writing, a number of its authors—or their forebears—have concentrated in the specific areas of time-travel and alternate history, from Theodor Herzl’s 1902 utopian Zionist novel Altneuland to the alternate Zions of Yoav Avni and the late Nava Semel, each of whom imagines an alternative Jewish state (in, respectively, Africa and the U.S.).

Indeed, while the time-stream stories in Zion’s Fiction focus for the most part on private decisions and not ones that affect Jewish or world history (an exception is Keren Landsman’s “Burn Alexandria”), one can’t help feeling their connectedness to the wider context of Israeli historical speculation—and also to a population that has had more direct life-or-death experience with war and terrorism than most.

In another comparison with the earlier, almost all-American volume, Zion’s Fiction displays somewhat greater self-consciousness about working in the genre’s traditions. Thus, a protagonist of one Israeli story discovers that his life is a creation of the classic science-fiction author Ray Bradbury. Another story involves back issues of Fantasia 2000, an Israeli sci-fi magazine that went defunct in 1984.

In this connection, the most interesting instance is “Hunter of Stars,” the very short contribution by Semel: not her best work, yet one with an intriguing combination of Jewish and sci-fi themes. “Hunter of Stars” is about what happens when atmospheric conditions suddenly cause all stars in the night sky to vanish from view. Semel’s description of the subsequent struggle to memorialize the lost lights is infused, in tone and language, with her lifelong concern with Holocaust memory, but numerous readers will also recognize the story’s inversion of Isaac Asimov’s classic 1941 “Nightfall,” in which it’s not the vanishing but the sudden revelation of thousands of previously hidden stars that proves psychically unbearable.

Finally, what about the quality of the writing in these two collections? Both contain some chaff, mainly in the form of minor stories by minor talents. Since People of the Book took as its criterion the presence of overt Jewish subject matter, it’s possible that better work was occasionally set aside in favor of, as it were, yarmulkes. For its part, Zion’s Fiction seeks to give a sense of the range of Israeli SFF writers, new as well as established, a goal that could account for the uneven quality of its own offerings.

Although there are well-known writers in both collections—Yolen, Beagle, Neil Gaiman, and Michael Chabon in People of the Book; Semel, Savyon Liebricht, and Shimon Adaf in Zion’s Fiction—their stories are not necessarily among the best on offer. (An egregious example is Chabon’s inevitable golem tale, which amounts to so much stale self-referentiality.) However, far and away the finest single entry in either volume is Liebricht’s “A Good Place for the Night.” This rending story, superbly translated, about the few survivors of a civilization-ending catastrophe, has roots simultaneously in post-apocalyptic science fiction, in iconic Hebrew literature (the title along with much else in the story nods to S.Y. Agnon), and in the Hebrew Bible.

To me, in the end, the most significant qualitative difference between the two books is that Zion’s Fiction leaves you wanting more. In their variety and unpredictability, its writers convey a sense of a dynamic and expanding genre—and I say this even as one familiar with the field, including examples of better fiction by some of the writers included here.

As for People of the Book, the overall quality of its stories is more reliably competent and in some ways stronger, but does one really look forward to another decade of golems and dybbuks? Of thinly realized shtetls, and sentences that begin “Grandfather smelled comfortably of chicken soup”? Of historically illiterate attacks on Israel by American Jews in the guise of “alternate history”? And all wrapped in the genial conviction that these somehow represent a seamless continuity with Jewish tradition?

One day, I suspect, Israeli fantasy will eclipse American bobbeh meises. But then, as the stories in Zion’s Fiction amply demonstrate, predicting the future is no easy job.

The First-Ever Anthology of Israeli Science Fiction and Fantasy