What If You Trivialize Hitler?

The question has plagued artists ever since the Holocaust. At least one contemporary artist manages to pass the test. 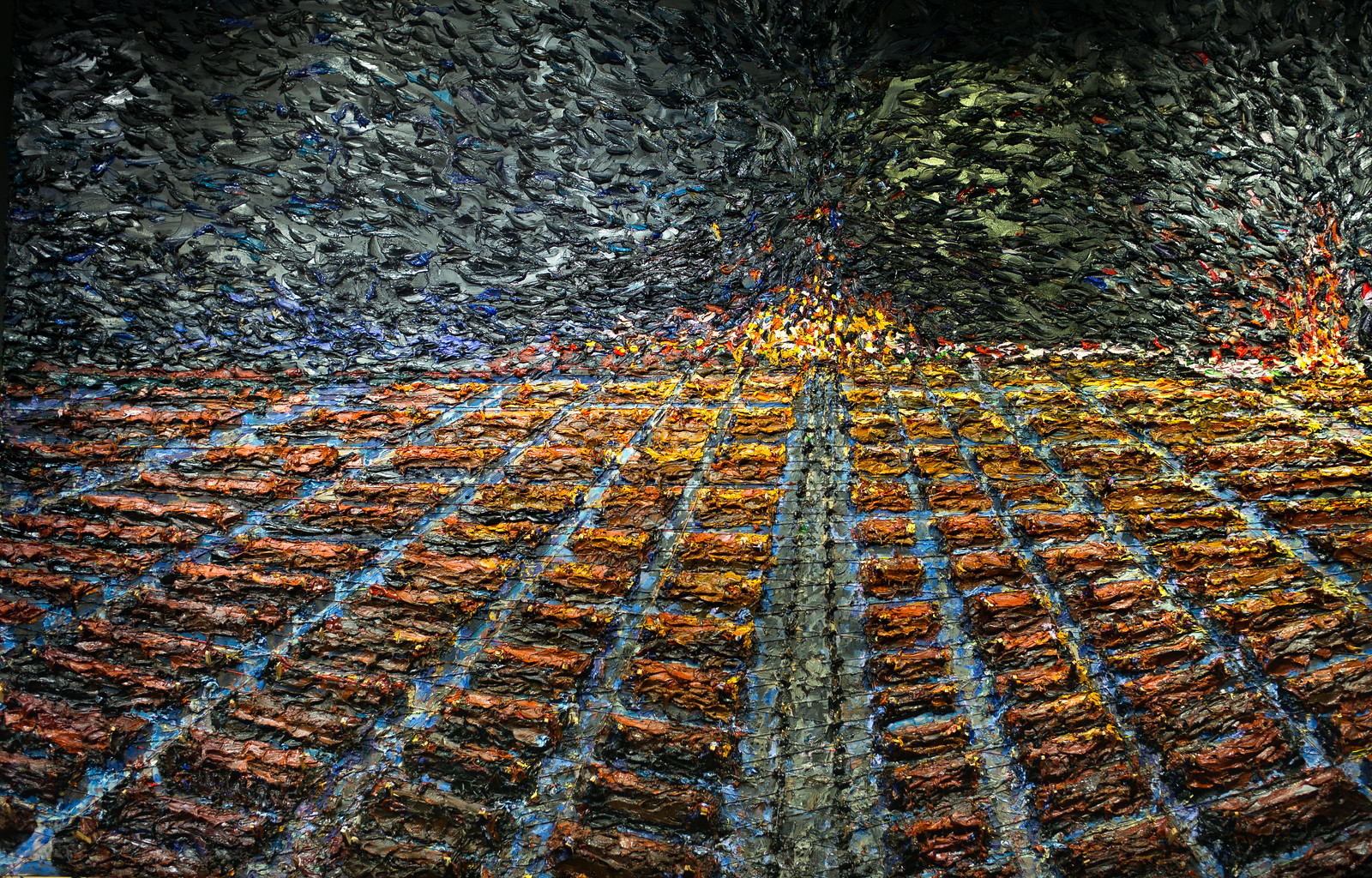 “How do you shoot the devil in the back?” asks the character played by Kevin Spacey in the 1995 movie The Usual Suspects. A similar question has plagued artists for centuries. If evil stops to pose for a portrait, what if you miss your shot, trivializing Hitler or turning Torquemada into a cartoon character?

For many, the 2002 exhibit Mirroring Evil at the Jewish Museum in New York missed the mark egregiously. Among its works commemorating the Holocaust were Chanel-, Hermès-, and Tiffany-branded poison-gas containers and a concentration-camp photograph into which the artist had inserted himself holding a Coke. Even for artists exploring the subject of the Holocaust thoughtfully, gorgeous brushwork or careful cross-hatching can so prettify the surface as to tie up evil in a neat bow.

All the more edifying, then, at the other end of the artistic spectrum, are Leonardo da Vinci’s portraits of ugly people—exquisitely drawn, but there’s no mistaking their individual hideousness.

Such thoughts came to mind on a recent visit to Auschwitz and Birkenau. Even articulating what it’s actually like to stand at the notorious train tracks leading to the entrance gates and all that lay beyond them is like trying to explain color to someone who has never seen. How could art possibly supply the want?

Fortunately, I came upon one possible answer to this conundrum later the same day in Krakow, at an exhibit of the Holocaust works of the American artist Bruce Gendelman. The recipe with which Gendelman approaches the portrayal of evil combines ominous or horrific imagery with a graceful handling of materials while somehow also finding room for a sliver of hope, even of God, peeking through the enveloping darkness.

Gendelman’s artistic journey began in September 2015 in the abandoned towns and fields of Eastern Europe, where this Palm Beach lawyer and insurance mogul was tracking the graves of murdered ancestors. His father Max, an American sniper in World War II who was captured during the Battle of the Bulge, miraculously escaped a Nazi camp with a German pilot he’d befriended. (Their unlikely friendship became the subject of Max’s memoir, A Tale of Two Soldiers.) Other family members weren’t so lucky. It was their stories that Gendelman, a gifted photographer, was seeking on a two-week trip to Poland and parts of the former Ukraine.

His photos from that trip inspired paintings, some of which, plus a life-sized diorama, an enormous mobile, and more photographs, were on display in Krakow’s Palace of Arts (Palac Sztuki). Just 75 years ago, this great institution had been decked out in Nazi banners. Now Gendelman was showing his work even as the present Polish government was championing legislation designed to minimize the role of occupied Poland in the German atrocities. Careful not to violate the new law, the artist was also not pulling any punches.

Another quotation: “He who fights with monsters should see to it that he himself does not become a monster.” Thus Nietzsche’s warning in Beyond Good and Evil, which continues: “When you gaze long into an abyss, the abyss also gazes into you.” The warning, taken to heart by Gendelman, applies equally to viewers of his works, which chart new aesthetic territory.

Gendelman’s massive Aerial View of Auschwitz II-Birkenau (2017) measures twelve by eight feet; by the time of the exhibit, the 550 pounds of oil paint on the canvas still hadn’t dried fully. Gendelman intentionally skews the grid upon which the barracks at Birkenau, the extermination camp adjacent to Auschwitz, were arranged, making the composition feel off-center and forcing viewers to struggle, vainly, to piece together the perspective. (There are parallels here to Cubism.) So thick is the surface, whose ingredients include construction-grade string, as to bridge the separate realms of painting and sculpture. In this sense, the work recalls both the “combines” of Robert Rauschenberg and the giant (if often grandiose) Holocaust canvases of the German artist Anselm Kiefer, born mere weeks before the end of World War II.

Four other expressive paintings in the exhibit portray the chimneys of Birkenau, which obviously impressed Gendelman powerfully enough to inspire an entire group of “portraits.” Those chimneys had stood out for me, too, on my visit to Birkenau that morning, forming an artificial forest as far as the eye could see while the barracks holding the doomed prisoners were mainly gone, leaving behind only their foundations, the occasional fragment of brick wall—and those symbol-laden smokestacks. Gendelman had hung the group of paintings higher than normal so that viewers had to look up at the chimneys and then above them to the imagined skyward route traced by the combusted material of the camp’s crematoria.

Perhaps riskiest of all was the exhibit’s life-sized diorama of a barracks interior. The installation, roughly 20 feet square and nine feet tall, consists of wood, metal, fabric, and foam. Dozens of mannequins in prisoners’ uniforms lie upon or lean against the bunks, and a bucket—whose stench visitors can easily imagine—lies on the floor.

At first, it seems, Gendelman had thought of giving the figures the faces of real survivors, as in the famous April 16, 1945 photo of inmates (including an emaciated Elie Wiesel) at the then just-liberated Buchenwald. But he decided against that. Instead, each of the dozens of figures in his diorama bears the artist’s own face: a unique angle on the inevitable what-if-that-had-happened-to-me sort of question that the living inevitably ask when they contemplate the butchered and lost.

If the barracks in Gendelman’s paintings terrify in their accusing silence, his diorama of Birkenau, in a manner wholly different from a photo or movie, makes viewers keenly aware of their own bodies in space, figuratively incorporating themselves in the dreadful scene. The installation resurfaced in my mind’s eye after I’d left the building and remained lodged there days later when I was trying to go to sleep.

And then there was the mobile. In thinking about artful mobiles, most people are likely to conjure up the playful works of Alexander Calder that hang in major collections from Washington’s National Gallery to the Milwaukee Art Museum. Gendelman’s Arbeit Macht Frei: The Selection (2018) is a gruesome take on the genre. Installed in its own room directly across from the diorama, the largely metallic mobile is dominated at the top by the cynical phrase, “Work Sets Free,” set in exactly the same curved configuration as at the entrance to Auschwitz. Dangling from the top are rows of miniature barracks, empty paint jars recycled as Zyklon-B canisters, trains and train tracks, showerheads, hair, corpses, Nazi guards, barbed wire, more barracks, and judgment scales.

In the decades after the Holocaust, many artists attacked their canvases as if they were voodoo dolls, burning, tearing, cutting, and otherwise assaulting the picture plane. Such works, represented in the provocative 2013 exhibit, Destroy the Picture: Painting the Void, 1949-1962, at Chicago’s Museum of Contemporary Art, illustrate one possible approach to exploring evil without glorifying it. Gendelman has opted for a different approach, at once more direct, more nuanced, and more purposive.

The idea of a Holocaust-themed mobile, for example, turns the playful, childish form on its head, and the enormous scale of the thing is surely enough to command attention. But like the mobile itself, the message hangs in the balance—as does memory of the Holocaust at a time when survivors and witnesses are dwindling and some countries complain they’re being blamed too much for not having protected innocent Jews.

On an hour-long walk-through of the Krakow exhibit, Gendelman expounded on his technique and its rationale. Thick paint evokes both the physical muck and the existential human quicksand that were the Nazi camps. Palette knives symbolize the tools used by inmates to apply mortar to the brickwork of chimneys like those through which the gaseous residue of their own incinerated bodies would ascend. The disused containers of artists’ paint, recycled into Zyklon-B canisters, comment bitterly on the artistic enterprise itself.

But, Gendelman pointed out, he also deploys symbolism pointing in another direction entirely. In several works, bits of blue sky gleam through, evoking the uncrushable hope that sustained the few who survived. In the high horizon lines of his landscapes, one spies transcendence and the presence of God.

In the exhibition catalog, Gendelman writes: “As memories of the Holocaust are replaced by history, post-witness contemporary art can serve as a powerful tool to awaken critical conversations.” He thus expects his creations to do double-duty, as art and as witness. Should they be called upon, indeed, they are prepared also to act as sentinels, exemplars of the awakened vigilance he urges upon all, and especially upon his fellow Jews. One gets the sense that his witness-paintings are up to the task.

What If You Trivialize Hitler?