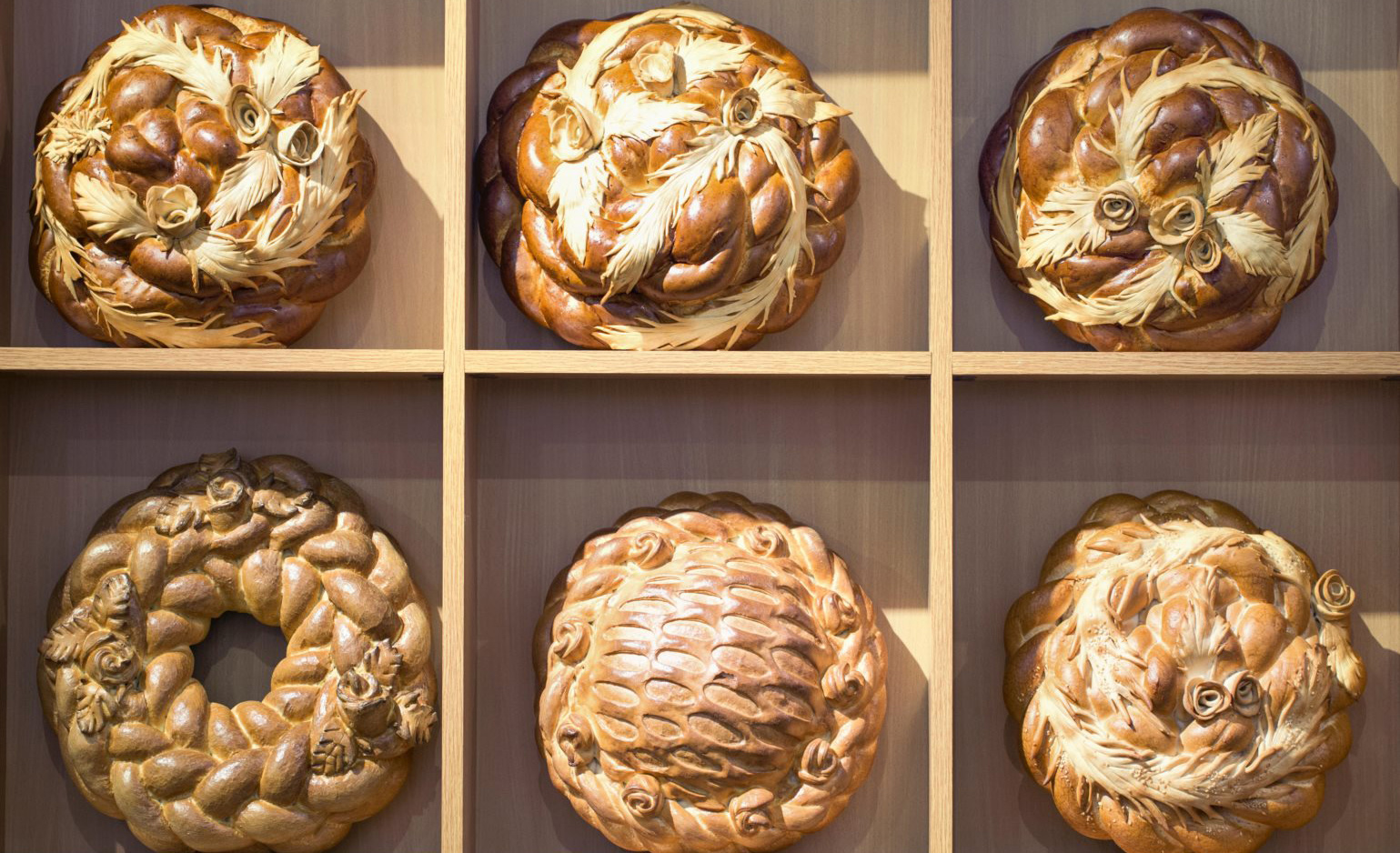 Debbie Prinz has inquired about the Yiddish word koyletsh. Relating what she knows about it, she writes:

From my research, I have ascertained that a koyletsh is a festive, braided challah traditionally prepared by Ashkenazi Jews for holidays (especially Purim) and weddings, at which there was a dance called a koyletsh tants. Some note the possible Greek origin of the word from kollix, a round loaf baked for Christian purposes. This then entered Slavic languages. In Eastern Europe, the word denoted a tall bread or cake baked for Easter or a sweet, braided, round one served on Christmas.

Some sources note that the great 11th-century exegete Rashi refers to a koyletsh in his commentary on the Talmud (P’saḥim 48b). Though he spent much of his life in northern France, Rashi studied and lived for several years in the Rhineland, where he may have come across the word.

Is there anything else that I don’t know?

I’ll try to add what I can, starting with Greek kollix. Apart from its being a kind of bread, not everyone agrees on what it was. The word’s earliest appearance on record is in Aristophanes’ comedy The Acharnians, which won first prize at a theater festival in Athens in 426 BCE. In this play the main character, the Athenian citizen Dicaeopolis, encounters a rustic peddler from the province of Boeotia, west of Athens, who approaches him with his wares. “O khaire, kollikophage Boiotidion,” Dicaeopolis greets him, which has been variously rendered by different translators as “Welcome, dear Boeotian muffin-eater!” (Benjamin Bichley Rogers); “’Tis well, my scone-fed friend!” (Robert Yelverton Tyrell); “A Boeotian! Bread-stick lovers one and all! Welcome!” (George Theodorides); and “Ah! Good day, Boeotian, eater of good round loaves!” (the anonymously translated Internet Classics’ Archives version).

Whatever it was, the kollix was considered a Boeotian specialty in Aristophanes’ day. My Liddell & Scott Greek-English Lexicon defines it as a “long roll of coarse bread,” of which a secondary form is kollura. In modern Greek, a koulouri is a bagel-shaped bread ring, often sprinkled with sesame seeds, such as is widespread in the eastern Mediterranean, where it is called a simit in Turkish and a ka’ak in Arabic. A typical koulouri recipe explains how to prepare the dough and “roll it out into a rope approximately 35 centimeters long, form a circle with it, and join the ends by pinching them together.”

Of course, if one were to leave the “rope” straight without making a circle of it, one would have the thin baguette or bread stick of my Greek-English Lexicon and George Theodorides’ translation. And if, on the other hand, one were to coil it, one would have what today’s Greeks call koulouraki, a braided pastry or roll that is traditionally baked for Easter. When coated with an egg glaze, as it often is, a koulouraki roll resembles nothing more than a small challah.

It seems highly likely, then, that Russian kalach, Ukrainian kolach, Polish koɫacz, Hungarian kalács, Rumanian colac, all denoting the same type of sometimes round, challah-like, braided or twisted bread made and glazed with eggs, do go back to Greek kollix, as does Yiddish koyletsh. In much of pre-World War II, Yiddish-speaking Eastern Europe, a koyletsh was synonymous with a khaleh and was often even the preferred term for a challah. In other parts of the region, the word denoted a challah that was round, while in still others it referred to a braided roll or any loaf of white bread at all. A linguistic map of its various shades of meaning can be found in Volume 3 of the Yiddish scholars Uriel Weinreich and Marvin Herzog’s sadly never-completed Language and Culture Atlas of Ashkenazic Jewry.

In many places, too, a koyletsh was, as Debbie Prinz writes, a challah specifically associated with the purim s’udeh or s’udat purim, the festive lunch held on that holiday, as well as with celebrations like weddings; in such cases, it was generally larger than an ordinary challah and its dough was strewn with raisins.

As for the wedding dance known as “the koyletsh dance,” it is described thus by Nathan Vuzonsky in his Jewish Folk Dances:

Upon leaving the synagogue after the [wedding] ceremony, a woman carrying a Koilitsh [sic] would dance toward [the bride and groom] as a symbol of the desire that they would always have good fortune and bread in their home.

In another version, an old woman would dance before the bride with a koyletsh in which were embedded burning candles.

Which brings us to Rashi.

The passage in P’saḥim referred to by Debbie Prinz discusses the question of whether several breads that have stuck together in the oven should be treated, for ritual purposes, as one bread or many. In the opinion of Rabbi Yehoshua ben Levi, the Talmud says, they should be treated as one only “when each loaf bites into another, but not in the case of k’akhin.” On the phrase “each loaf bites into the other,” Rashi comments, “Because they are round and broad and stick together,” while of the Hebrew plural noun k’akhin he says, “In French [b’la’az] these are called coilos and do not stick, [whether they are] long or short.”

Yehoshua ben Levi, according to Rashi, is saying that when bread is baked in the form of round loaves, these overlap in the baking pan and adhere, whereas in the form of baguettes or bread sticks they do not. Such a long, thin bread, Rashi says, called coilos in the language of northern France, was known to the rabbis as a ka’akh—a close cognate of the Arabic ka’ak, which, as we have seen, is the same as the Greek koulouraki, the descendant of Aristophanes’ kollix.

Was Rashi wrong about the ka’akh, which in contemporary Hebrew denotes a bread ring, too, and not a bread stick? And even if he was, could his coilos still be an ancestor of the East European koyletsh? It’s quite possible. Although there is no known French or Romance word from which coilos can be derived, it occurred as kolatsch, Herzog’s atlas shows, in the Yiddish of Western Europe, where it most commonly meant a braided yeast cake.

Assuming, then, that the kolatsch developed from braiding the coilos, and that the latter was a word carried westward in their wanderings by formerly Greek-speaking Jews of the eastern Mediterranean, one might hypothesize that East European Yiddish took koyletsh from West European Yiddish rather than from Polish, Ukrainian, or some other non-Jewish language.

Today, koyletsh is a word rarely encountered outside of Yiddish-speaking ḥasidic communities in America, Israel, and elsewhere, where it is still used for a challah-like bread baked for Purim and other celebrations. And although the koyletsh tantz, to the best of my knowledge, is no longer performed at weddings, there are still said to be places in which a koyletsh is broken into pieces above the head of the bride and groom and handed out to the wedding guests.

And that, Debbie Prinz, is about as much as I know.