The figure of the great fairy king in Shakespeare’s A Midsummer Night’s Dream is descended from Judah Maccabee. 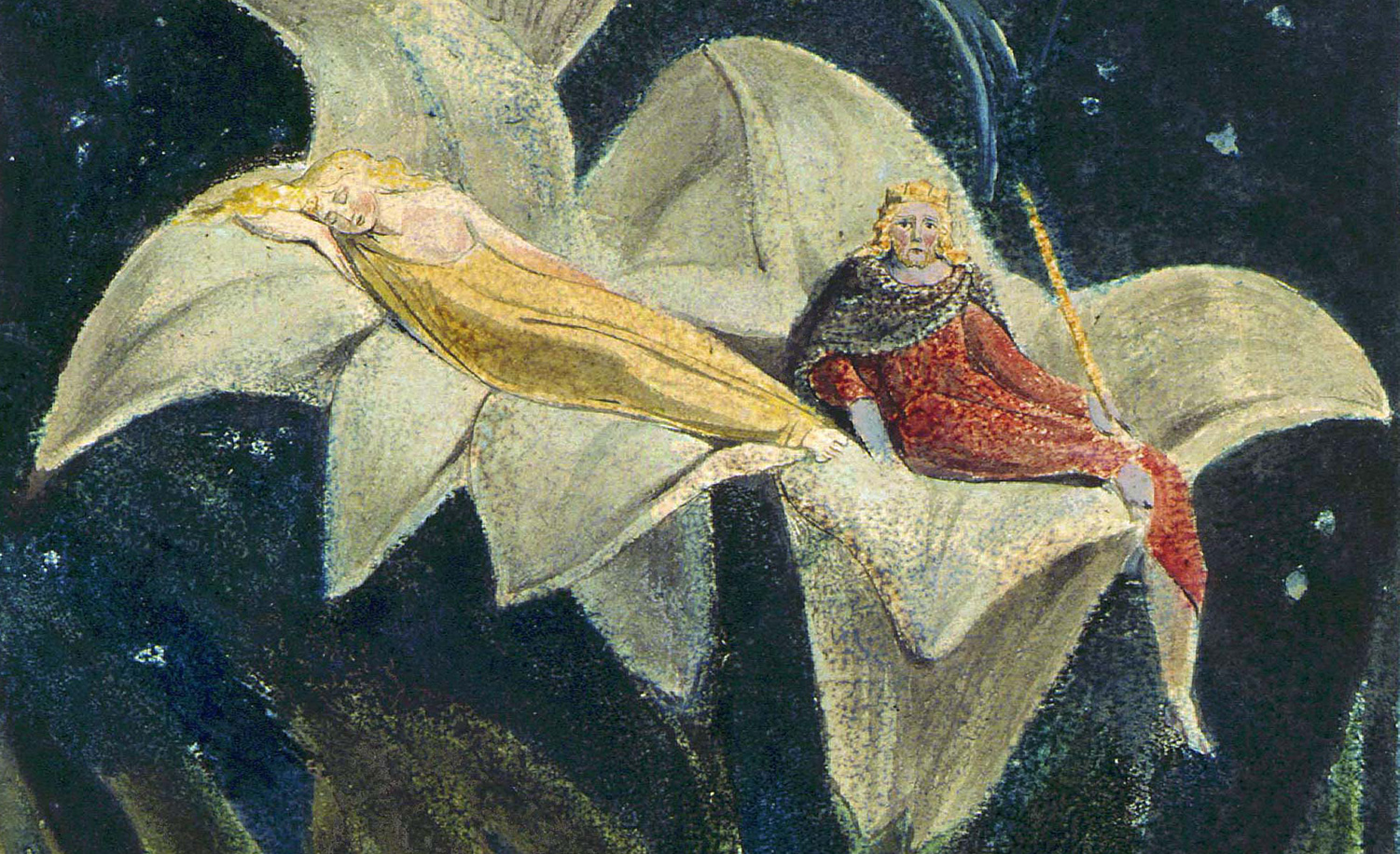 One of William Blake’s illustrations to The Song of Los; scholars have traditionally identified the figures shown as Titania and Oberon from A Midsummer Night’s Dream. Wikipedia.

To speak of Shakespeare’s Jewish characters is to conjure up The Merchant of Venice and his anti-Semitic creation of the Jew Shylock. But another of his characters bears a more impressive Jewish pedigree. That character is Oberon, the king of the fairies, best known to us from A Midsummer Night’s Dream (“Ill met by moonlight, proud Titania”). And the best time to invoke Oberon’s name is on the festival of Hanukkah.

How so? Because Oberon, it turns out, is the direct descendant of none other than Judah Maccabee.

To explain this strange assertion, a bit of literary history is in order.

Unlike other characters in A Midsummer Night’s Dream, Oberon is not found in the annals of classical myth or European folktales. The first work in which a fairy king of that name appears is a 13th-century French verse romance, Huon de Bordeaux.

Popular in its time, Huon de Bordeaux spawned a number of sequels, influenced the development of Italian epic romance, and, by means of a 16th-century translation, seems to have found its way into the work of Shakespeare, Spenser, and other English writers. In a testament to its endurance, the poem was even adapted by the American writer Andre Norton as a fantasy novel in 1951.

Huon de Bordeaux tells of the brave and virtuous knight Huon, sent by the emperor Charlemagne on an impossible quest. In the poem, Charlemagne himself, unlike the idealized figure known to us from the 11th-century Song of Roland, lacks wisdom and discernment, is unable to see who among his court are villains and who are honorable, and so winds up rewarding the evil, punishing the good, and sending the innocent Huon on a suicide mission. That mission: to travel to Saracen Babylon, enter the heavily armed court of its king, kiss the king’s daughter in full view of the court, kill the king, and bring back some of his teeth.

Yet it is not Huon but the fairy king Oberon (Auberon in the French) who steals the show. First appearing in a magical forest near Jerusalem, Oberon repeatedly intercedes to help the knight Huon fulfill his mission, defeat his enemies, marry his beloved, and reconcile with the emperor.

As opposed to the corrupt and fallen politics embodied in the poem by the emperor Charlemagne, Oberon represents virtuous political authority. Thus, once he reaches Babylon, Huon learns that the Saracen king has himself become the vassal of the evil giant Angolafer, the literal “strong man” in the region whose monstrous misrule parallels Charlemagne’s. Both of these monarchs govern though force and fear rather than through the fair application of justice. Both must be brought low.

While the poem’s fantastic geography is clearly inspired by the experience of the Crusades and the exoticism of the Orient, its primary concern is the Machiavellian issue of earthly versus heavenly politics. Within these terms, Oberon presents a fantasy of perfect rule. He even attributes his magic powers to God. Thus, chastising Charlemagne, he magically sets a table that symbolizes his superiority to the emperor:

“I wish my table and all that is thereon near to King Charlemagne’s table and about two feet higher than it; and because I have heard that ofttimes of a little thing comes a greater, I will that on my table be set my cup and horn and harness, the which Huon conquered from the giant Angolafer, and also I wish with me a hundred-thousand men-at-arms, such as I was wont to have in battle.”

He had no sooner said the words than by the will of God and the might of fairydom his table, with all that he wished on it, was set just by King Charlemagne’s table, higher and greater than his.

Oberon then performs a kind of Christian communion, magically filling his cup with wine and giving it to Charlemagne’s innocent captives to drink, before freeing them and causing the traitors at Charlemagne’s court to be hanged on fairy-made gallows.

So where, in all of this, does Judah Maccabee come in? Mixing Roman history and Arthurian legend, Oberon tells both Huon and Charlemagne that his father was Julius Caesar and his mother Morgan Le Fay. This unlikely genealogy is further developed in a prequel to Huon written by a different author in the late 13th or early 14th century. Entitled the Roman d’Auberon, it focuses on Oberon’s family tree, beginning with his great-grandfather: none other than Judah Maccabee.

It seems that Judah has married the daughter of a king he has defeated in battle. The couple then have a daughter, who in turn weds an unnamed emperor of Rome and gives birth to Julius Caesar. Julius Caesar is raised by his grandfather Judah and then married off to King Arthur’s sister Morgan le Fay. Julius and Morgan have two sons, one of whom is Oberon. (The other is named George, presumably England’s patron saint, who later in the poem meets up with Jesus, Mary, and Joseph.)

As the editor of the 1973 critical edition of the Roman d’Auberon rightly observes, this poem “deliberately ignores historical and geographical reality, mixing perfectly real—or at least realistic—figures with marvelous and magical beings.” Such a mélange is certainly true of the poem’s Jewish elements.

At the beginning of the poem, we are told that the Maccabee family follows the law “that God gave to Moses.” Yet we also find them celebrating Christmas—and this, before the birth of Jesus. Moreover, while the Maccabees are portrayed as noble exemplars of chivalrous virtue, the poem also states that “Jesus was punished and hung on the cross by the false Jews.”

And that is not the end of the story. Oberon and his fantastic lineage are an instance of a longstanding genealogical impulse in the European imagination that often turns on the question of how Christendom relates to its pagan and Jewish antecedents. The legends of King Arthur, for example, have roots in Geoffrey of Monmouth’s 12th-century History of the Kings of Britain, which takes pains to link English history with both classical antiquity and biblical chronology. “At this time,” Geoffrey tells us in a typical inflection point in his British chronicle, “Samuel the prophet governed in Judea, Sylvius Aeneas was yet living, and Homer was esteemed a famous orator and poet.”

It was also in the 12th century that we find articulated the notion of “Matters”: more or less coherent and distinct traditions of Western narrative that may be juxtaposed with each other. The Chanson des Saisnes (Song of the Saxons), generally attributed to the French poet Jehan Bodel, declares in its prologue that there are three such Matters: that of France, of Britain, and of Rome. These are, respectively, the French narrative tradition, which Bodel judges to be more historically grounded; the comparatively more fantastical and fairy-infused category of Arthurian legend; and the heritage of classical antiquity.

In his person, Oberon braids together these three strands, as well as a fourth that similarly contains kings and empires, epic battles and betrayals, magic and giants, national history and heroes. This, following Bodel, we might call the Matter of Israel—that is, the narrative tradition of the Hebrew Bible. If Bodel omits this fourth Matter from his list, it is because it is already implicit in the very idea of national Matters.

Nor are these narrative traditions simply entertaining tales. They make claims: historical, political, and metaphysical. It therefore seems no accident that the notion of the Matters emerges during the period of the Crusades, which brought about a heightened awareness of Europe’s distinctiveness, of the reality of the biblical landscapes of the Holy Land, and of the relation, real or imagined, between the two.

Within that context, the articulation of a Matter of France, Matter of Britain, and Matter of Rome posed an implicit, two-part question: how did these different narrative traditions relate to each other, and how did they relate to the narrative tradition of the Bible? By the 14th century, such questions had produced another development that united Judah Maccabee not only with Julius Caesar but also with King Arthur.

This was the theme of the Nine Worthies, representing, in sculpture, art, and poetry, the chivalric ideal as embodied in three trios: one pagan (Hector, Alexander, Julius Caesar), one Jewish (Joshua, David, Judah Maccabee), and one Christian (Arthur, Charlemagne, Godfrey of Bouillon). Like the Huon cycle, Geoffrey of Monmouth’s history, and Bodel’s Matters, the Nine Worthies was a further attempt to link pagan antiquity, the Bible, and Christian Europe.

Significantly, the biblical trio was drawn from Hebrew scripture and (in the case of Judah Maccabee) the Apocrypha, not from the New Testament. This was surely due in part to the fact that the latter is short on warriors; yet it also suggests an answer to the challenge of how to establish the connection between Europe and the Bible, between the crusaders and the Holy Land, between Christendom and Israel.

Since the Christian trio were emphatically post-biblical, how to place them in relationship to the biblical text and its geography? Answer: the roster of the Worthies ends with Godfrey, the Crusader king of Jerusalem, thereby implying that the Christians were not invaders but rather the rightful heirs of the Holy Land and the perfect synthesis of Athens, Rome, and Judea.

Articulating and formalizing the relationships among these diverse histories and traditions has always been an animating concern of European culture. The resulting syntheses have been both dynamic and unstable, raising and answering the question of whether and how the peoples of Europe are part of the biblical story, of what Camelot and Roncevalles have to do with Jerusalem.

The statuesque formality of the Nine Worthies, following on the more fluid audaciousness of the Huon romances, reflects a determination to intertwine Arthur and Charlemagne, Saint George and Julius Caesar, Jesus and Judah Maccabee, into a unified fabric of myth, history, and romance. But the presence of actual Jews could also introduce a tremor of uncertainty into these neat systems, as in the Roman d’Auberon and its contrast of the noble Maccabees to the “false Jews” it blames for the crucifixion. A few centuries later, Shakespeare would make comedy of the already well-trod theme of the Nine Worthies in Love’s Labours Lost, intentionally confusing Judah Maccabee with Judas Iscariot, the Jew as chivalric hero with the Jew as villain.

Yet the figure of Judah Maccabee as national hero and freedom fighter continued to be a bridge between the Hebrew Bible and modern Europe, as can be heard in the plangent and triumphant strains of Handel’s 1746 oratorio Judas Maccabaeus. Where, then, should we place Oberon—Judah Maccabee’s great-grandson—in this scheme? In one sense, he embodies a profound cultural ferment that has endured since the Middle Ages. But, in another sense, his fairy kingdom represents a space in which the contradictions of history and legend, past and present, can be imaginatively resolved: somewhat as they are resolved in Midrash, or in a midsummer night’s dream.