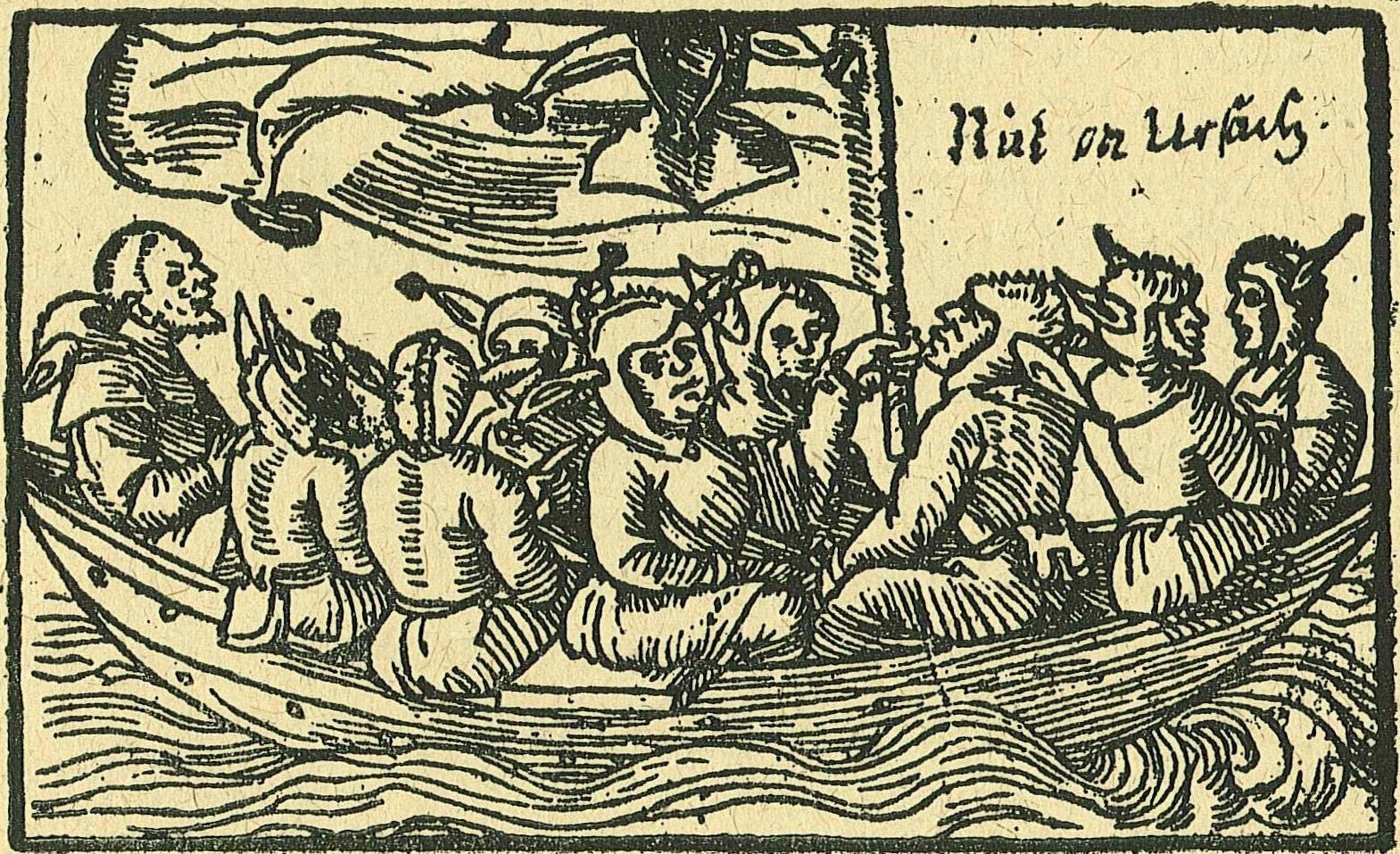 An illustration of the ship of fools from Sebastian Brant’s 1494 poem of the same name. Wikipedia.

Donald Trump is a rodomont. Not to mention a grobian. And, of course, a Sinon suffering from proditomania.

Dowd proceeded to provide definitions of these archaic terms. A rodomont is a “vain boaster.” (The word, when I looked it up, turned out to derive from the character of Rodomontade in Ariosto’s Orlando Furioso.) A Sinon is “one who misleads and betrays” (from a Greek warrior in Homer’s Iliad). A grobian is “a buffoonish person.”

That, I didn’t have to look up. I already knew it from Yiddish. A grobyan, though, is not exactly a buffoon. He’s a coarse, vulgar lout—unless he’s a she, in which case he’s a grobyanke. The –yan or –yanke ending is appended to the common Yiddish word grob, coarse or crude, which some of you may know from such expressions as a grober yung, a rude young man, or a grober yid, a boorish, ignorant Jew.

And why, I wondered, did A.Word.A.Day consider grobyan a rare bit of English vocabulary? Many Yiddish words, of course, have made their way partially into American English, so that some non-Jewish Americans know them and many more don’t. But grobyan (stressed on its second syllable) isn’t one of these and shows no signs of becoming one. Even among American Jews, you’ll seldom encounter it unless they speak some Yiddish. Why rank it with lexical antiques like rodomont and Sinon?

Little did I know! While grobyan is certainly Yiddish, grobian (stressed on its first syllable) is, I discovered, no less genuinely English, its earliest appearance in print dated by the Oxford English Dictionary to 1609. The OED defines it as referring to a “clownish, slovenly person” (hence, Dowd’s “buffoonish”) and traces it, like rodomont and Sinon, to a fictional character, one appearing in the works of “15th- and 16th-century writers in Germany.”

This called for more research. The first of these writers, I soon ascertained, was the pastor Sebastian Brant, who in 1494 published a volume entitled Das Narrenschyff ad Narragoniam, a German-Latin macaronic translatable as “The Fools’ Ship to Foolsiana.” Consisting of 112 rhymed-verse satires of as many types of vice-ridden “fools,” Das Narrenschyff has a chapter called Von groben narren, “On Fools Who Are Gross.” Its opening couplet is Eyn nuwer heylig heist Grobian/ Denn will yetzt fyren yederman,” namely, “There’s a new saint, he’s called Grobian,/ His followers are everyone.”

St. Grobian does not actually play much of a role in “The Ship of Fools,” the title given Brant’s book when much of it was translated into English by Alexander Barclay in 1509. (Barclay’s translation does not get as far as the St. Grobian chapter.) Rather, Von groben narren concentrates on the grossness of the saint’s followers. This was also the approach of the Latin author Friederich Dedekind in his 1549 Grobianus et Grobiana, sive de morum simplicitate (“Grobianus and Grobiana, or Of The Simplicity of Manners”), which added a female symbol of boorishness to the male one.

Two years later, Kaspar Scheidt, in translating Dedekind’s work into German, gave Grobianus’ devotees a name. In a preface to the reader, he wrote: Doch muss ich dich vor underrichten/ Wie du solt all dein Sitten schlichten,/ Mit Angsicht, Leib. Gestalt, Geberden,/ Und magst ein Grobianer warden—that is, “And so allow me to instruct you/ How you can perfect your manners,/ Looks, opinions, and demeanor/ In becoming a Grobianer.”

It was from German that Yiddish must have long ago borrowed grobyaner (the word is attested to in Yiddish as least as far back as the early 19th century), constructing it as a plural form whose singular was grobyan. Meanwhile, Brant, Dedekind, and Scheidt’s books inspired a literature in England, too, in which the Grobianer was indeed cast buffoonishly.

Perhaps the funniest example of this is Charles May’s 1636 dramatic farce Grobiana’s Nuptials, in which Grobianus and Grobiana are transformed into a father and daughter. The former, “Honorary Emeritus President of the Grobian Court and a Man who respects no Manners,” is looking for a son-in-law like himself for his beloved if toothless child and throws her a banquet to which her suitors are invited. One of these is Ursin, “a bear-herd and Grobian who hopes his smell of bear pleases her.”

Grobiana, however, is attracted to Tantoblin, whose “aroma of the jakes” (today we would say “the john”) she finds irresistible, and he in turn falls madly in love with her when observing her performance on the toilet. When Ursin tries to kiss her, Tantoblin bashes him on the head with his walking stick, after which he and Grobiana embrace passionately and are wed on the spot.

But fun is fun, and wit is wit. Wittier by far is Roger Bull’s free 18th-century translation of Dedekind’s Grobianus et Grobiana, which appeared under the title Grobianus, or The Compleat Booby. A parodic reversal of an etiquette book, it guides the would-be Grobian through a typical day, starting with rising in the morning:

Rightly believe it the most vile disgrace
To cleanse thy dirty hands or wash thy face;
Who dares remark what Dirt the Hands begrime—
Those Hands which feed no other mouth but Thine?
Some say, “To wash your teeth be ever nice.”
But stop thine Ears to all such wild Advice!

At the breakfast table, the Grobian doesn’t bother to eat his porridge with a spoon:

Slurp from the bowl! Let through thy roseate lips the nectar glide
While thy mouth grapples with the Dish’s side.”

Does his nose itch?

When you’re about to sneeze, be sure you make
Your Neighbor of the friendly show’r partake,
For ’tis a custom many much commend
To cry “God bless you!” to a sneezing Friend.
Sneeze in their Faces; then belike they’ll know
The proper Time the Blessing to bestow.

Tell each nice [finicky] Critick that you want the Art
To curb that active Principle, a Fart.

Wish to engage in table talk?

From others also learn the prudent way,
To bandy Word for Word as well as they;
To all your Friends be liberal of Breath,
Lest none depart till almost vexed to Death;
And vainly prattle of your own Affairs
And cheat with many Promises their Ears.

And so, from morning to night the Grobian’s day proceeds until it is time for bed and he is told, “Rise not ere the Hour of Noon approach/ And rest by day has cured the Night’s Debauch.”

Grobians, of course, continue to exist to this day, though the word, unlike grobyan, has long been obsolete. As for Maureen Dowd’s proditomania, the OED defines it as “a morbid belief in the ubiquity and omnipotence of traitors,” derives it from Latin proditur, traitor, and finds but a single case of it in the history of the English language. Now there’s a real collector’s item!