The Passion of Colum McCann

The highly acclaimed Apeirogon, a recent novel about the Israel-Palestinian conflict, has a lot more to say about Jews and Israel than anybody has picked up on—none of it good. 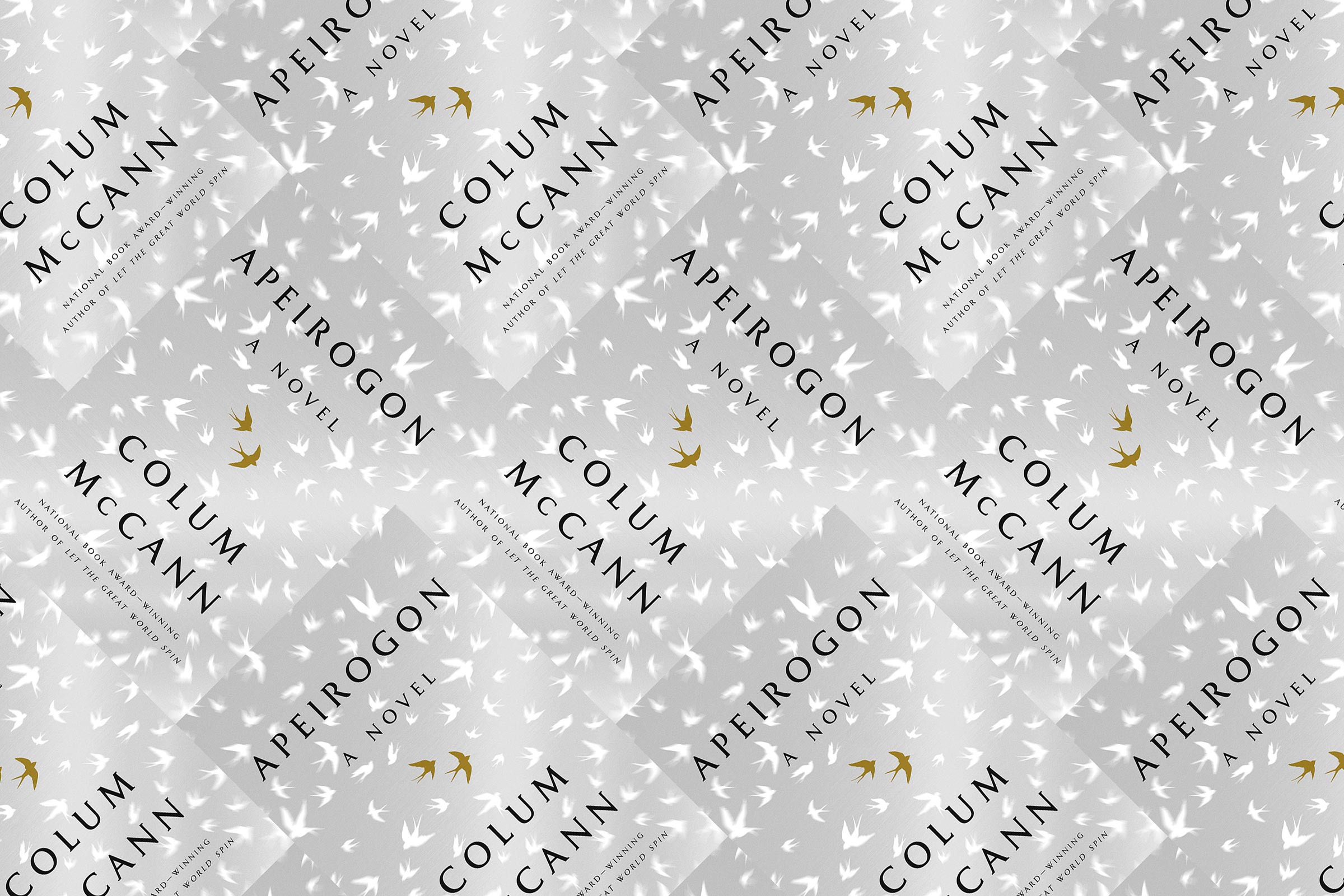 Observation
Naftali Moses
About the author

Naftali Moses holds a PhD in medical history from Bar-Ilan University in Israel. The author of Really Dead? and Mourning Under Glass, he has also translated several books on Jewish thought into English.
40   5 Comments Print Email Kindle

A “brilliant act of novel-making,” and an “empathy engine” of “marvelous complexity,” wrote a New York Times reviewer of Colum McCann’s recent novel Apeirogon. In the Washington Post, a slightly more reserved Charles Finch praised its “careful ferocity” and “strange nobility,” calling it “a loving, thoughtful, grueling novel.” Apeirogon was also long-listed for the prestigious Man Booker prize, and Steven Spielberg’s production company has already purchased the move rights. Not to be outdone, the Guardian called it “a work of art whose beauty, intelligence, and compassion may go some way to changing things.”

And what things stand to be changed by the novel? Nothing less than the Israel-Palestinian conflict. Apeirogon brings us into the story of two real men, Rami Elhanan and Bassam Aramin—one Israeli, the other Palestinian. Each is the father of a daughter killed in the ongoing battle between Jew and Arab. In the novel, as in real life, the two fathers are good friends.

Rami is a successful Jerusalem graphic artist, Bassam a Fatah operative who works for the Palestinian Authority. Until his daughter is killed, Rami is more interested in entrepreneurship than politics; Bassam spends seven years in an Israeli prison for attacking an army patrol, at which point he abandons violence. Rami, following his daughter’s death, becomes part of a joint Israeli-Palestinian organization for bereaved parents dedicated to dialogue in pursuit of peace. Upon leaving prison, Bassam helps to found a group called Combatants for Peace which aims at bringing Israelis and Palestinians together to call for an end to the “occupation.”

The paths of Bassam and Rami cross through their activism. They are already friends in 2007, when, ten years after Rami’s daughter Smadar is killed, Bassam’s daughter, ten-year-old Abir, is wounded by a rubber bullet. She dies in a Jerusalem hospital. This shared fate brings the fathers closer together and they dedicate themselves to addressing audiences about their lives and their grief.

In geometry, an apeirogon—from the Greek meaning “limitless”—is a polygon with so many sides that it appears to be a circle. This unusual title alludes to the highly experimental fashion in which McCann tells the two men’s stories. While the book is of medium length, it comprises 1,000 sections, numbered from one to 500 and then back again to one, with some containing but a single sentence, or, in one case, merely a blotch of ink. Each of the two central chapters, labeled 500, is a monologue by one of the fathers detailing his own torturous bereavement. Rejecting the conventions of chronological narrative, the author fills the other sections with everything from vaguely Nietzschean aphorisms to descriptions of Middle Eastern life, lore, and history, to tidbits of horticulture, journalism, and other sundry topics.

Call this a postmodern gimmick if you’d like, but it works. McCann—a winner of a National Book Award and various other honors and accolades—knows how to tell a story. He can jump nimbly from an obscure historical detail to the latest news item. With the precision of a watchmaker, he builds something from these tiny pieces, winds it up, and lets it work so that the reader, slowly but surely, comes to know these two men and their horrific pain.

As my own sixteen-year-old son was murdered in a 2008 Palestinian terrorist attack in Jerusalem, I know this pain all too well. And having written and spoken about my own loss numerous times, I also understand Rami’s and Bassam’s urge to deal with their pain by harnessing their stories as bereaved fathers and telling them to any who will listen. They are ordinary men thrust onto a stage they never wanted to ascend. And even if in their own eyes there is something almost artificial, even theatrical, about this continual telling and retelling, it is worth it: as McCann puts it, when Rami “spoke he saw Smadar again.”

Of course, as the author tells us before page one, Apeirogon fictionalizes its protagonists’ lives. It does this above all by making the two men mirror-images of one another, each reflecting on the identical horror of a child’s terrible death. In this abstracted portrait of the two protagonists, they share not only grief, but a common lodestar: “ending the occupation.” After the myriad twists and turns and dozens of seemingly blind alleys, at the very center of the novel lies the great, horrific moral equalizer of a beloved child’s death. Two young girls. Jew, Arab—it matters not. What matters is that the conflict ends.

That is the conceit McCann offers his readers: that the emotional power of his novel is built on shared human suffering. But it is a conceit born by a willful distortion that obscures the source of the novel’s driving pain. For, though all fathers would grieve their children, the cause of that grief is not distributed haphazardly. No, the deaths of Rami and Bassam’s daughters were dealt by human hands. Apeirogon would seek to bring peace to Israelis and Palestinians by erasing those humans’ agency and responsibility.

Let us begin with the facts of the two children’s deaths. Abir was shot by an errant rubber bullet fired mistakenly by a young border-patrol soldier in the midst of what may have been a riot. Israel is indeed responsible. But rubber bullets, by design, are meant to cause pain, not death, and Abir was not the intended target.

And what of Smadar? She was the victim of a meticulously planned attack carried out by a trio of Arab terrorists who disguised themselves, loaded their explosive vests with shrapnel, and detonated their bombs in a pedestrian mall with the goal of killing and maiming as many civilians as possible. Nurit, her mother, wishes she could tell any who want to know that, “truth be told, it was the fault of the Israeli government leaders, who were the actual murderers” and that “the killing was not the fault of the bombers. . . . Israel was culpable. The blood was on its hands.”

McCann’s fictional Nurit may believe that, and the real-life Nurit apparently does so as well. But this view of things absolves the bombers themselves, the terrorist group that recruited and trained them, and the governments that rewarded their families with cash.

In other words, the very moral parallel around which Apeirogon is structured is false. But merely to raise this obvious point is to do a disservice to the work’s more subtle messages. Take its description of Smadar’s murder: her face remained “perfectly intact” while only her back is “sprayed” by the shrapnel that “obliterated” not her, but merely “the back of the Blondie T-shirt” that she wore. Contrast this to how Abir was killed: the bullet “smashed into the back of her head, crushing the bones in her skull like those of a tiny ortolan.” This last word refers to a bird ravenously eaten whole by a dying, gluttonous François Mitterrand earlier in the work: colonializing Europe (of which Israel, by implication, is a part) devouring the innocent.

Apeirogon’s Palestinians are, unlike its Israelis, deeply rooted in the land. When, in one scene, then-Senator John Kerry asks him, “Where did you grow up?” Bassam responds, “In a cave.” But later on when Rami is asked, “Where are you from?” he can only fumble out “from Hungary. . . . Originally.” (The real Rami describes himself as a “seventh-generation Jerusalemite.”) And naturally, McCann makes a point of letting us know that the other youths murdered alongside Smadar are not “real” natives either: Sivan’s parents are from France; Yael moved here from Los Angeles; Rami was from the former Soviet Union. Does this migratory Jewish blood count as much in Apeirogon’s moral universe as that of someone not just born on the land, but seemingly birthed from its very womb?

McCann is far too careful a writer for these to be coincidences. But that isn’t to say that he’s content with subtlety alone:

He was Israeli. A shameful and powerful thing to be.

And then a few pages later:

He was Palestinian. Waiting was a matter of spirit. There was perseverance in the refusal of defeat.

This contrast between “shameful” Israelis and noble Palestinians is heightened by the novel’s treatment of the Holocaust—a subject no Western discussion of the Arab-Israeli conflict seems able to leave aside. In Apeirogon, Bassam’s conversion to nonviolence is triggered by his viewing a documentary of its horrors on television in his Israeli jail cell. By contrast, Rami, a confessed “graduate of the Holocaust” is, naturally, haunted by it. McCann throws in a long, translated piece by the Israeli satirist Etgar Keret as chapter 118 to show just how cravenly manipulative Israel can be, playing on European guilt for profit. And Bassam knows that ultimately the Israelis simply “turned their oppression back on us again and again.”

Yet this is old hat. McCann is in fact up to something more sophisticated and more pernicious. Observe:

So, this leitmotif turns the Jewish victims of the Holocaust into Nazi mass murderers. But McCann does not stop there:

Worse than Nazis, McCann’s Jews seem to be Christ-killers, and this avant-garde, experimental novel comes to seem an artful recasting of a medieval passion play where the Jews once again murder the Lord. That’s not all.

Which brings me to the hero himself. Bassam the grieving father inhabits a mood I know all too well. But there is also Bassam the prison enforcer for Fatah, responsible—in McCann’s own words—for “beating into submission” suspected Palestinian collaborators. During my tour of duty in the IDF, at the time of the first intifada, I watched a large bundle wrapped in blankets sail outward over the thirteen-foot fence of the prison compound I was guarding. Just as the Muslim call to prayer sounded over the camp loudspeakers at 4:30 am another voice announced, “Here is your dead dog.” The bundle held the horrifically mutilated body of a suspected collaborator, who had been tortured by his fellow prisoners for the entire evening.

I do not fault Bassam for suing the government over his loss. (He was awarded $400,000 by an Israeli court.) Some small measure of justice, perhaps. But I wonder what justice he might offer those Palestinians whose families were “threatened” or whose bodies were broken by his kicks—those whom he deemed worthy of being “beaten into submission.”

Wonder is all that a reader of Apeirogon can do. For McCann’s artful play between truth and fiction provides no real answers. Instead, this supposed “empathy engine” is fueled by the oldest of prejudices. Beneath all the spark and polish lies a refashioned charge of deicide. And surprisingly, not a single reviewer (so far as I know) has noticed. Were they all taken in by McCann’s sleight of hand? Or are recycled insinuations just not noteworthy—even in our hypersensitive age? To my mind, Smadar, Abir, and the other real innocents whose blood has stained our land deserve a memorial more fitting than cliché, no matter how elegantly constructed.

The Passion of Colum McCann