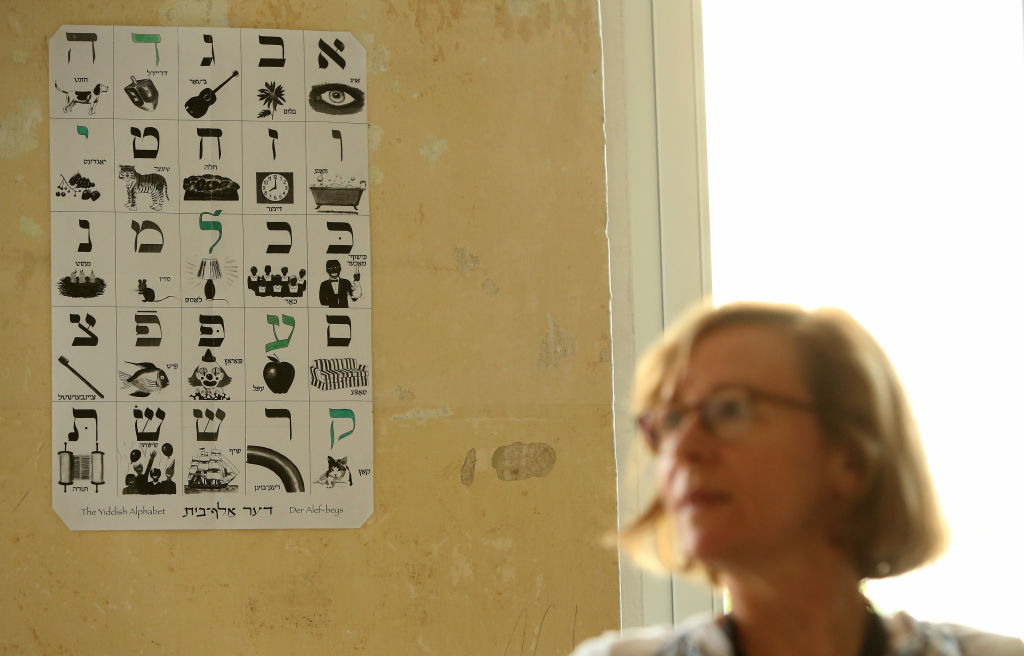 In Germany, a student takes part in a course taught as part of the Yiddish Summer Weimar of 2018, a summer institute and festival focused on Yiddish, while a Yiddish alphabet hangs on the wall. Photo by Adam Berry/Getty Images.

Last week, the language-learning app Duolingo introduced a new course on Yiddish. The course sparked significant interest, and provoked significant controversy. Suddenly, this language-learning app became the site of a proxy argument over modern Jewish identity. In the app’s menu, each language is typically represented by the flag of the primary country in which that language is spoken. But Yiddish is a language without an obvious home, and so which flag should represent it became the subject of much and fervent debate. Moreover, since each Yiddish dialect is associated with particular cultural and religious orientations, controversy also surrounded the question of which dialect should govern pronunciation of the language in the audio elements of the app.

To better understand these controversies, one of the Duolingo app’s Yiddish course developers, Meena Viswanath, joins this week’s podcast. In conversation with Mosaic’s editor Jonathan Silver, she explains how the controversies came about, what they mean for students of Yiddish, and what they reveal about Jewish identity right now.

Some people learn Yiddish because they want to be able to read the great works of Yiddish literature in the original. We have the big three Yiddish writers, from the dawn of Yiddish literature in the 19th century, with Sholem Aleichem, I.L. Peretz, and Mendele Mokher Sforim, but of course we also have Isaac Bashevis Singer, who wrote in Yiddish and won the Nobel Prize for Literature for his Yiddish writing, and gave his acceptance speech in Yiddish.

Another reason I think is that one or two generations ago in America there was a wave of assimilation, of American Jews trying to fit in a little bit more and be a little bit more American and little bit less Jewish, and part of that was leaving behind the language or the religion. I think nowadays a lot of these younger Jews who grew up with some tenuous connection to Judaism―maybe they had a bar mitzvah or they went to a seder on Passover, but not much more than that―are, as they’re coming of age and a little older, really trying to find out more about their cultural roots. I think it’s also fairly popular now in the United States to connect to your roots and to your culture, and so a lot of people are reaching out and looking back in their cultural background to see what they connect to. For some people that’s religion, for some people it’s nationalism and Zionism, and for some people it’s just the language on its own.

And some people really connect to Yiddish as a portion of the Yiddish-leftist world, the Jewish-socialist world that was very strong during the early 20th century here. As there is a move towards the left in certain areas of politics, some people associate that with Yiddish as well, because Jewish Communists and socialists tended to speak Yiddish, and so there’s a lot of literature and culture and songs that are associated with leftist politics.