The late statesman’s supposed knowledge of Yiddish bordered on the mythic. And myth it was, for his admirers routinely exaggerated his facility with the language. 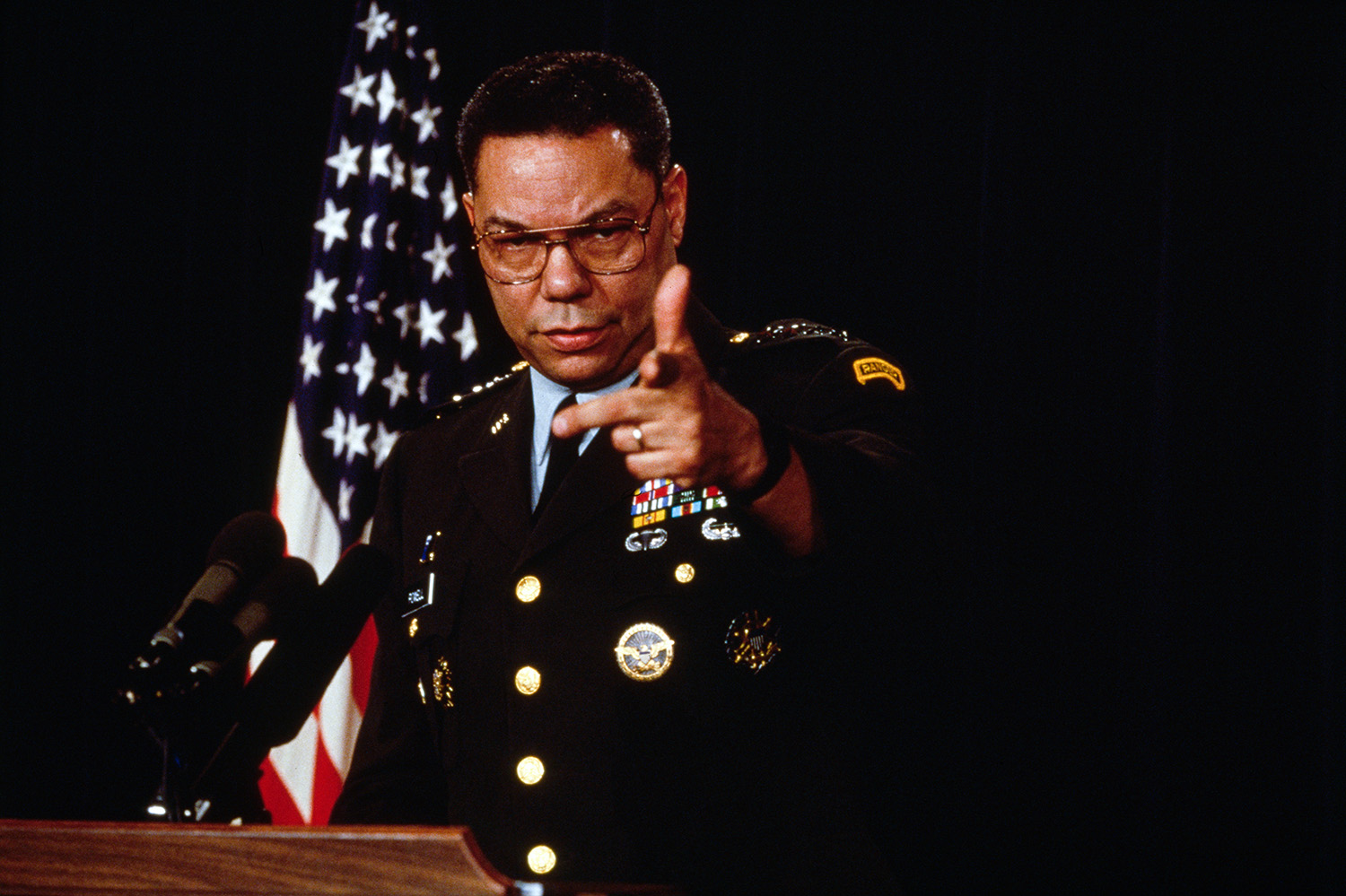 Colin Powell at the Pentagon in 1991. Rick Maiman/Sygma via Getty Images.

In my last column, I tried to answer some questions from reader Seth Gitell about bits and snatches of Yiddish phrases that he remembered hearing as a child. One of these was “Ma Hobetsky’s,” which Mr. Gitell thought referred to “a remote or arcane store of some kind.” From this I spun the theory that “Ma Hobetsky” was perhaps a Yiddish-speaking general store owner  who answered “ikh hob dos,” “I have it,” to requests for even the unlikeliest items.

My comedown arrived a few days later in the form of another communication from Mr. Gitell. “Ma Hobetsky,” he had been informed by an acquaintance who shared his childhood milieu, was a garbled memory of the words meylekh sobetske or “King Sobetzky.” When I wrote back explaining that Jan III Sobieski was king of Poland from 1674 to 1696, and asked how the Yiddish expression fun meylekh sobetzkes tsaytn, “from the days of King Sobiesky”—that is, “as old as old can be”—could possibly refer to a store, Mr. Gitell replied:

The mistake was mine. What I actually remembered was situations like someone’s rummaging in a closet, coming out wearing an old hat or coat, and being told, ‘Don’t wear that, it’s from Ma Hobetsky’s.’ Not unnaturally, I thought that this referred to a store, not to the long ago time in which the item was bought.

So much for my theory! But let us now turn to another store, the baby-furniture store in New York City’s south Bronx in which Yiddish is said to have been learned by Colin Powell, the African-American four-star general, one-time head of the Joint Chiefs of Staff, and former U.S. secretary of state who died on October 18. Powell, the story goes, picked up Yiddish from the store’s immigrant owner Jay Sickser while working in it as a shop assistant for several summers in his adolescence.

Powell’s supposed knowledge of Yiddish bordered on the legendary. “The General Who Spoke Yiddish” and “Colin Powell, Yiddish-speaking Warrior-Diplomat Dies of Covid Complications” were some of the headlines of his obituaries, one of which explained that the young Powell “was able to converse [in Yiddish] fairly well with his employers, and . . . with a number of the Jewish customers whose English was not fluent.” Another obituary related that “As a teenager, Colin Powell learned to speak Yiddish while working in a Jewish-owned baby-equipment store in New York.”

One may be permitted to doubt it, or at least to wonder whether, if Powell did learn a bit of Yiddish from Jay Sickser and his customers, he hadn’t forgotten nearly all of it by the time he was a public figure. Few actual Yiddish remarks have been attributed to him, and the ones that have been do not indicate great facility with the language. Thus, for instance, the story has often been told about how, back in the 1980s, Powell flabbergasted Israeli prime minister Yitzḥak Shamir by saying to him upon being introduced, “Men kent redn Yiddish—a remark that, if accurately quoted, would have been as grammatically wrong as it was unexpected. Men ken redn Yiddish, “One can speak Yiddish,” or mir kennen redn Yiddish, “We can speak Yiddish,” would have been fine, but not men kent.

Of course, men kent redn Yiddish may have been someone’s false memory of what Powell said to Shamir rather than what he did say. Yet Powell himself was the first to admit that reports of his prowess at Yiddish were greatly exaggerated. “Let me put to rest the rumor that I speak Yiddish,” he said in addressing a 1991 AIPAC conference, and went on with a grin: “I really do not speak Yiddish—well maybe a bisl.” That bisl, however, does not seem to have included very much. When prodded to demonstrate it, Powell repeatedly resorted to the same example, as when he told an interviewer, “When I was annoyed at someone, I’d say ‘A gzunt in kepl,’ meaning ‘I’ll hit you on the side of the head.’ That could also be a blessing, depending on how you said it, but I preferred a slap on the head.”

The phrase Powell had in mind was a gezunt in dayn kepl, literally, “health to your head.” Generally used with children or youngsters (kepl is the diminutive of kop, head), it could indeed either be an approving compliment for having said or done something clever or precocious, or  a rebuke, possibly accompanied by a playful flick on the cheek, for something foolish or untoward; in the latter case too, though, it was hardly a threat of real physical violence. The fact that Powell repeated it on several occasions would tend to indicate that there were not many other Yiddish expressions of Jay Sickser’s that he remembered.

Powell liked to recall his job in Sickser’s store as that of a shlepper, someone whose humble task it was to fetch or drag things from the stockroom or elsewhere. As used in America today, this word, generally shortened to “shlep,” no longer has such a meaning. No doubt because many shleppers remained in humble positions all their lives rather than rise to the rank of four-star generals, a “shlep” has come to denote a hapless person who will never get anywhere. (As a verb, of course, “to shlep” has retained its sense of “to carry,” often unnecessarily or tediously, from place to place.)

The noun “shlep” in the sense of a no-account is an Americanism, as were one or two of the Yiddish-derived expressions mentioned by Seth Gittell. Yet in East European Yiddish, too, the noun shleper was a derogatory one denoting a beggar, pauper, or serial failure. This meaning came, not from “shlepper” as used in a furniture store, which is also an Americanism, but from such Yiddish expressions as nokhshkleper, “a dragger after,” i.e., someone who is always being left behind, and shlepn zikh, “to drag oneself,” i.e., to barely manage to get along. Our American shlep, one might say, has in him something of both the “shlepper” and the shleper.

Colin Powell was no shlep. American Jews will remember him fondly.