Its Name Is Not Asher Lev

A new hasidic art gallery grows in Brooklyn and is already bucking stereotypes. Can it survive, and what does it suggest about contemporary Orthodox life? 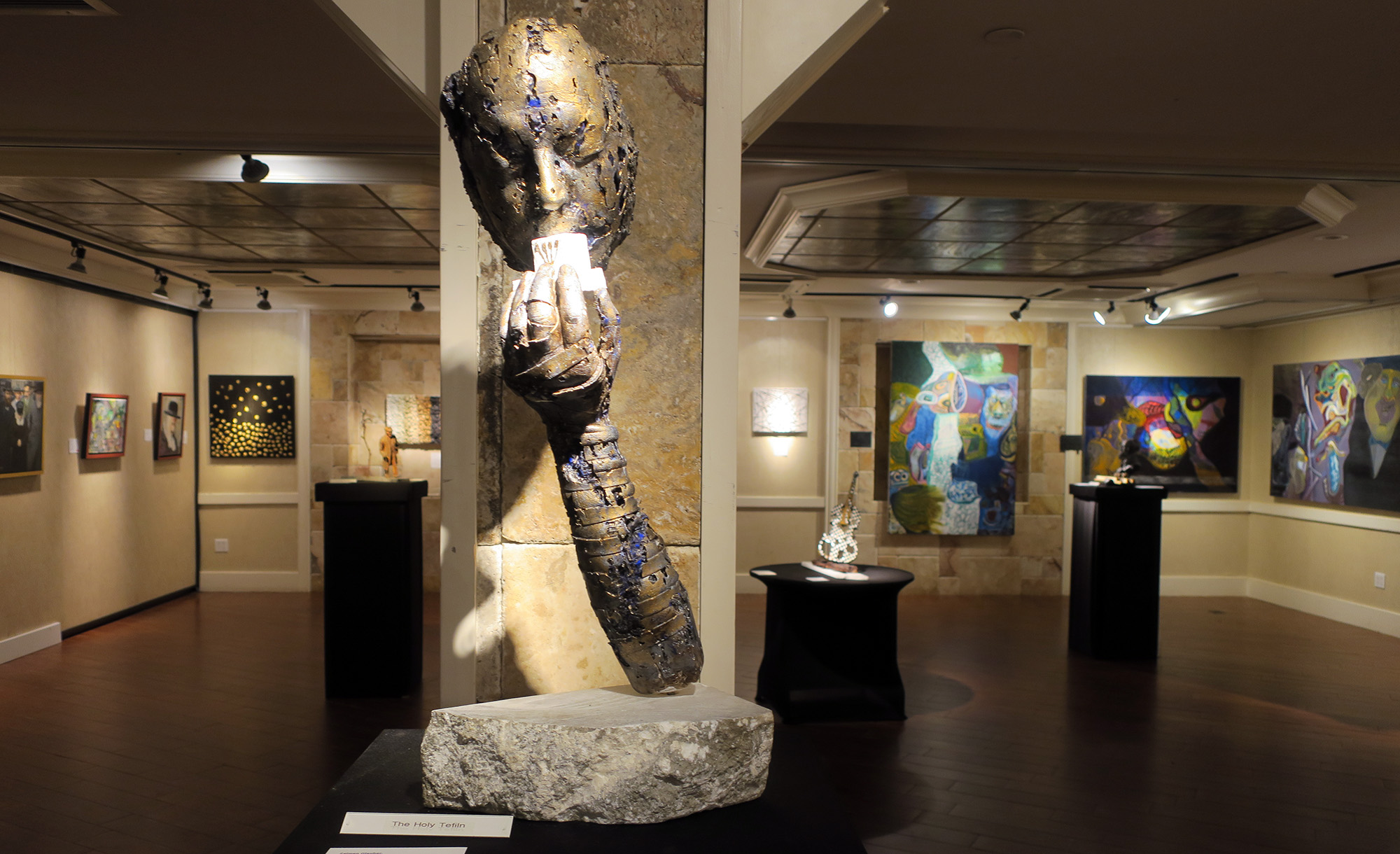 That Ḥasidim wear their faith on their sleeves both places them in anti-Semitic crosshairs and makes them cinematic fodder, as in Mel Brooks’s Rabbi Tuckman from Robin Hood: Men in Tights or Woody Allen’s persona at the Easter dinner in Annie Hall. Their clothing makes for an easy and superficial punchline, but Ḥasidism is far more interesting for the ways it infuses holiness into daily life. That emerges in a particularly compelling manner when hasidic artists tell their own stories.

This is important context surrounding Shtetl, a new art gallery in heavily ḥasidic Williamsburg, Brooklyn, which is now picking up a heavy burden in bringing more ḥasidic art to both Ḥasidim and to the wider public.

New art galleries often don’t make it to upsherin (the three-year-old hair-cutting ceremony) let alone bar mitzvah, but Shtetl is already attracting attention, not only in Jewish publications, but also in TimeOut New York, The Atlantic, and the online art publication Hyperallergic. The latter noted that the “vision of ḥasidic life on display is more progressive and inclusive than simplistic perceptions of the community might normally allow.” Even as a critic with a lot more experience with ḥasidic life than most arts journalists have, I too found the show eye-opening in that regard. At 1,500 square feet in the otherwise quiet basement of the 35-room Condor Hotel, of which the gallery founder is part owner, Shtetl pales compared to juggernaut-sized mainstream galleries. But it should not be underestimated.

Somewhere during my conversation with Shtetl’s founder Zalmen Glauber, forty-eight, and his wife Leah, forty-seven, its director, I noticed how often they were mentioning beauty. This struck me because beauty so rarely surfaces when I interview curators, art historians, and museum directors. In those conversations, I hear about art that is political and edgy, art that lays bare systemic problems and centers unheard voices. Of course, speaking of unheard voices, I can count on one hand the number of times I’ve heard an official at a major museum express any interest whatsoever in ḥasidic voices, save the ones who have left their community and create work that criticizes it.

To the Glaubers, ḥasidic life is beautiful. The labels accompanying the works in the show are beautiful too. And Leah mentioned the beauty of the miniatures, which Zalmen made using tweezers, to illustrate the ushpizin (symbolic guests) for their Sukkah. Not only did they emphasize the beauty of the art and the discussion surrounding it—rather than, say, art’s provocative and disquieting capacity—but the Glaubers stressed their hope that the artworks would inspire viewers. It is such a positive vision that my first instinct was to peg it as provincial. But I quickly changed my mind. Why shouldn’t art be able to make people happy and uplift them without losing aesthetic credibility? And ḥasidic artists turn out to be perfect tour guides to the domain of beauty.

How? Ḥasidic artists, in theory at least, live with the divine as they paint. As Glauber put it, “You live with Hashem [God] not only when you learn Torah.” In that sense, there’s a lot more at stake in each brushstroke for some of these artists than there is for most artists who paint a still life or a landscape. To artists who are painting their faith, each element is so personal and deeply felt that it is almost like each work doubles as self-portraiture. So much in the modern-art world is about reds being just reds and squares being just squares. But an artist who selects visual elements in concert with religious belief emerges in, rather than disappears from, the art.

The wares on view at Shtetl vary widely in quality and sophistication. No budding Giottos or Donatellos emerge in the inaugural exhibit, which features 30 works by seven artists, but collectively the works are thoughtful, reflecting ritually observant artists trying to reconcile the iconography of their faith—whether Jews praying or studying religious texts—with a secular artistic vocabulary. (The show is up for another four weeks; a new show with seven new artists opens in March.)

Glauber’s sculpture The Fiddler of New York (2015) depicts a musician’s hands, head (modeled upon Glauber’s son), and instrument. The viewer, forced to imagine the rest of the body, cannot miss a prominent blue stroke covering the fiddler’s nose and side curls, which evokes to me Zorro’s mask. I asked Glauber what it meant and he said, “Just because.” The figure, embodying New York, boldly proclaims its identity. Like many a New Yorker, it doesn’t feel the need to explain itself or justify its choices.

The use of blue as a symbol of New York jibes across the room with one of three large paintings by Lipa Schmeltzer, a singer known to some as “the Lady Gaga of hasidic music.” In Intense Diversity (2017), Schmeltzer paints a key blue, because the word “blue” rhymes with the word “du” in moshiakh iz nokh nisht du (the messiah is not yet here). This abstract, symbolic, and playful use of blue in both the N.Y. fiddler and the End of Days-pining key is very inventive, and it places these works in the company of the elevated and sophisticated artworks one would see in much better-funded art galleries. (Works in Shtetl’s inaugural show range from $1,500 to $40,000; one can spend hundreds of thousands if not millions per piece in other art galleries.)

Yanky Waldman’s sculpture Listening (2021) consists of ten ears suspended on sticks above a base in a manner that suggests skewered appetizers or an uneven Hanukkah lamp. The depicted ten ears do not listen to prayers nor ritual shofar blowing but are inner whale-ear bones, tympanic bulla. Shtetl’s label both invokes Darwin, suggesting the bones are highly evolved, and notes their use in shamanic and Native American healing meditation rituals. This work—in which a ḥasidic Jew not only reflects knowledge of these spiritual and religious practices but also draws upon them as artistic inspiration rather than rejecting them as idolatrous or evil temptations—has the power to stop visitors in their tracks, and if they are willing, to change their perspective on Ḥasidim. This is the sort of thing you might expect to see in a secular gallery, and it shows off how involved Ḥasidim are in the outside world.

The works also push back collectively against unfortunate portrayals of Ḥasidim on television, such as those depicted in Netflix series like Unorthodox and My Unorthodox Life. Ḥasidic life has more to offer. “Ḥesed [lovingkindness], all the volunteering, and our yomim tovim [holidays]. There is so much beauty in our lives. Unfortunately, we are being shown in the negative,” Leah said. “Don’t make it so black. We have a good time. We have a good life.” Indeed, those who think from a viewing of Unorthodox that ḥasidic communities curb women’s ambitions would be surprised to meet the confident and outspoken Leah, who helps run the gallery and seems perfectly comfortable, when she sees fit, interrupting and answering for her husband. 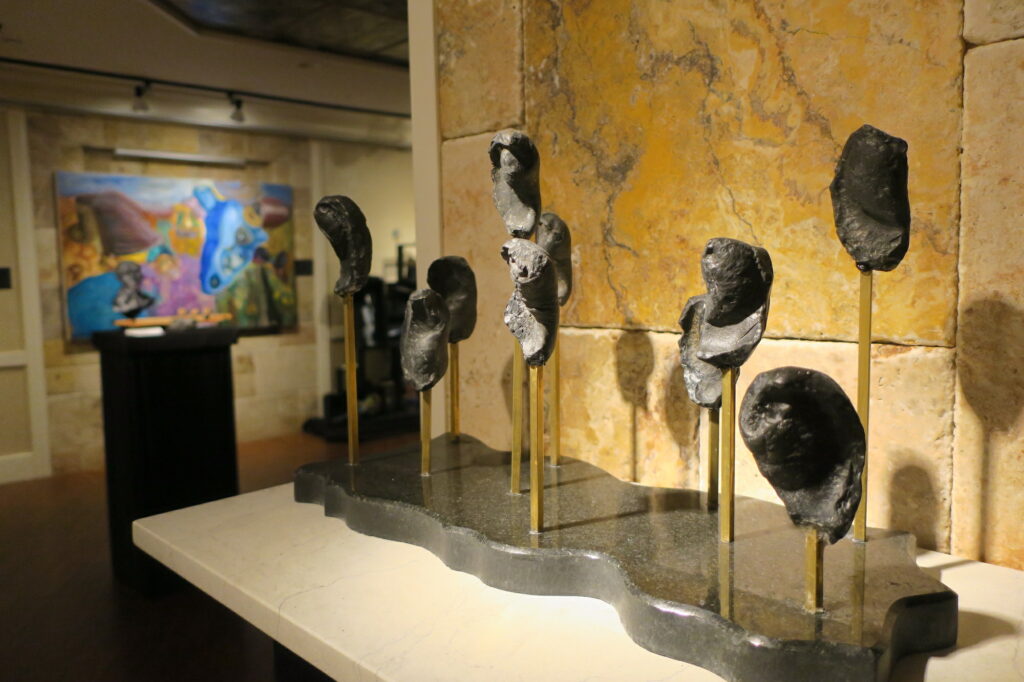 In a long conversation with Schmeltzer, the painter and singer explained something about the ḥasidic world that I had not previously appreciated. More progressive ḥasidic men like to express themselves by wearing unique cufflinks or brand-name black shoes like Ferragamos, while the extra-lenient might even don colorful neckties or personalize their look with eyeglasses. But, Schmeltzer thinks, art may soon surpass clothing as a form of ḥasidic personal expression. After all, every Ḥasid has to wear shoes, but not every Ḥasid has art in his dining room. Art, Schmeltzer told me, “opens a little, tiny avenue.”

That tiny avenue goes both ways. Shtetl, if it succeeds, could, in addition to piquing the interest of Ḥasidim who have not thought about art collecting, also offer outsiders more of a sense of the kinds of things that Ḥasidim might display in their inner sanctums. And it could make a strong case even to non-Jews that there is something of the ḥasidic milieu and faith perspective that is worth collecting, displaying in one’s home, and engaging with on an ongoing basis. That Glauber trained at the Art Students League and Schmeltzer at Columbia University means that Shtetl has ambassadors who are conversant in secular art languages as well as those of the communities in which they live and worship.

One of the best works on view at Shtetl is deceptively simple. Among several charcoal drawings by Usher Goldhirsch—one of which is a good likeness of Schmeltzer—is Ner: The Last Candle (2021). The sort of single-wick candle in a glass jar that one lights to memorialize a lost relative—a yahrzeit candle—appears off-center in the picture, titled toward the viewer. The subject is clearly discernible, but Goldhirsch has cropped the composition in such a way that it verges on abstraction. The label notes the work’s dedication to those who lost their lives in the COVID-19 pandemic. “Let this be our last candle we need to light,” it says. The sophisticated drawing actually stands up to that large mission.

Another favorite piece is Glauber’s sculpture Red Apple from the Garden (2019), depicts a black-and-white checkered violin with a red fruit sitting inside. It both toys with the viewer’s expectations and presents something of a mission statement for Shtetl, one with which the gallery’s impact might be measured in the future. Through one of the holes in the stringless violin, one can make out what one takes to be an apple. The title of course primes the viewer to think of the Edenic story in Genesis. But, Zalmen proudly shares, when one looks closer, one realizes the fruit in question is a pear. All is not what it seems—both in this sculpture, and in the ḥasidic art that Shtetl champions.

If Shtetl is to succeed, it will have to learn from Modern Orthodoxy and have its feet firmly planted in both religious and secular domains. There are limits to that, of course, nor can one easily compare Shtetl to shows displayed in with secular galleries; to begin with, there are no nudes or other immodestly dressed figures portrayed. Likewise, it’s hard to point to any particular school or style; the artists, who represent what Zalmen and Leah say is a rise in artmaking and art instruction in ḥasidic communities, work on different subjects or themes. Still, they overlap in a way that suggests such developments could flower up—that the ground is ready for a movement in which, say, a dozen artists all tackled the same subject or the same Jewish theme. In particular, if Shtetl staged a group show that centered on depictions of the aspects of the artists’ everyday lives that defy the clichés and stereotypes, a body of work with serious staying power might result.

Its Name Is Not Asher Lev