The World Knows It as Kiev or Kyiv. To Jews, It's Yehupetz.

The name is comical and magical at once, designating a city of broad boulevards and fancy shop windows known to Sholem Aleichem’s Tevye the dairyman and others. 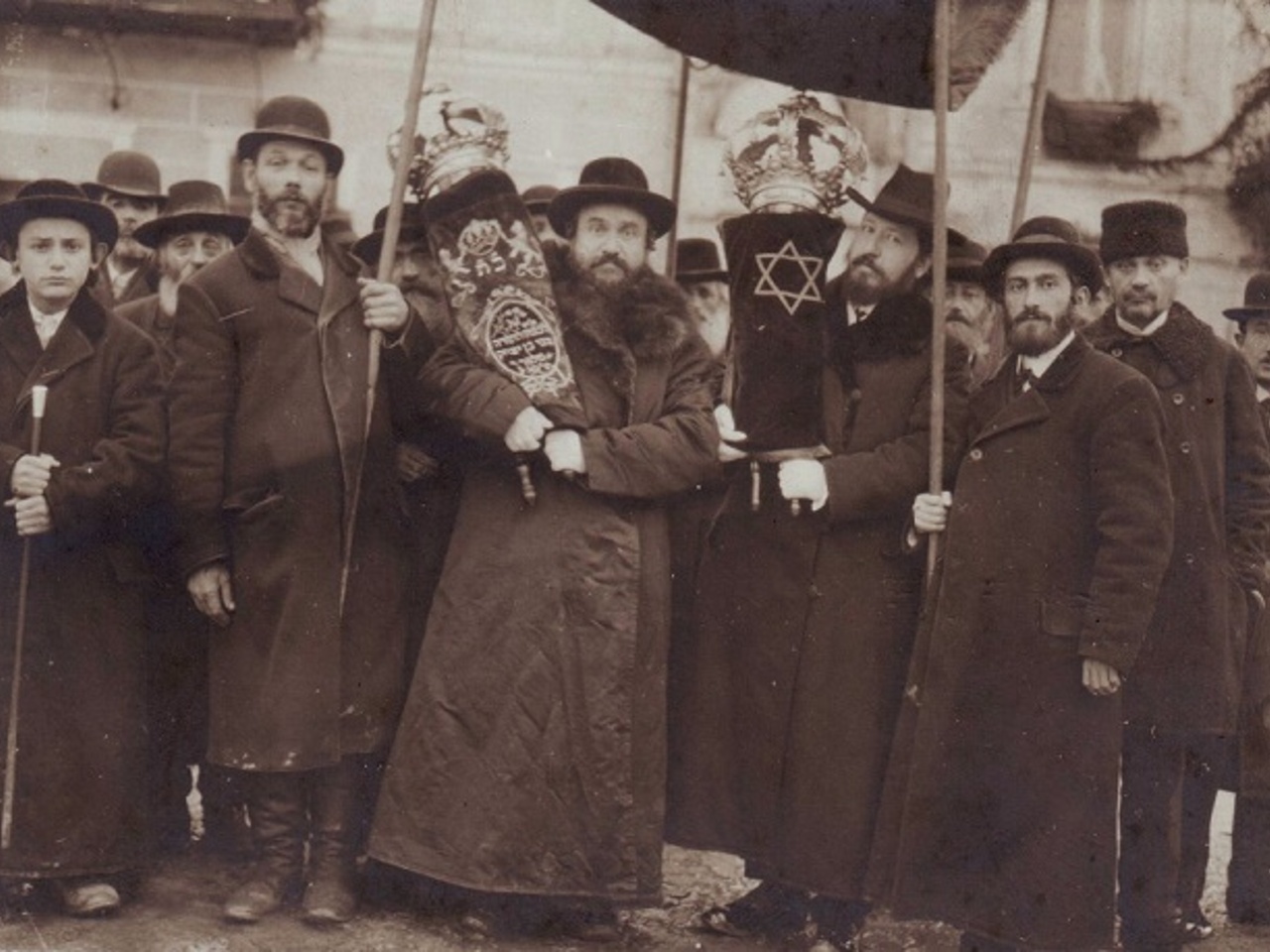 A city that most Americans couldn’t have found on a map a month ago, or even said what country it was the capital of, is now prayed for by everyone. Although the real battle for it has yet to be joined, it has already earned its place in the annals of heroism.

The world knows it as Kiev or Kyiv. To Jews, though, or at least to those familiar with the world of Sholem Aleichem, it also goes by the name of Yehupetz.

Yehupetz! The name is comical and magical at once. It designates a city of broad boulevards and fancy shop windows known to Tevye the dairyman and his cousin Menachem-Mendl the shlimazl; of the legendary Brodsky the sugar king and the magnificent Great Choral Synagogue with its lavishly paid cantors; of the rich Jews who live there in opulent mansions and the poor ones who are barred by tsarist law from spending a night there, so that if they visit it to peddle their wares or see the sights, they must be gone by sundown or face a police raid in the cheap hotel they stay in. For the Jews of the Ukrainian shtetlakh and derflakh (small villages), the Kasrilevkes and Anatevkas of Sholem Aleichem’s fiction, life in Yehupetz is a dream that is tantalizingly close yet out of reach.

Indeed, it sometimes seems to be literally a dream. “Once, for example, . . . ” Sholem Aleichem is told by Tevye, one of whose daughters has married a rich Kievan Jew. “But do you promise not laugh at me? Because I’m afraid you’ll laugh. . . . Well, once I put on my best clothes and went to the station in order to take the train there—I mean, to where he and she live. I stepped up to the window and asked for a ticket. ‘Where to?’ says the ticket seller. ‘To Yehupetz,’ I say. ‘Yehupetz?’ he says. ‘I never heard of such a place.’ ‘Well, it’s no fault of mine if you haven’t,’ I say—and I turn around, walk home again, take off my best clothes, and go back to work, to my little dairy business with its horse and wagon.’”

And how could the ticket seller have heard of it? Yehupetz is a code word, in part used by Sholem Aleichem to keep his stories from being cited as evidence of illegal Jewish comings and goings in Kiev. A Ukrainian at a ticket window can hardly be expected to know that.

But should this code word, spelled יהופעץ in Yiddish, be pronounced “Yehipetz?” The thought occurred to me the other day while watching the news on TV of Russian columns advancing on Kiev.

True, most of Sholem Aleichem’s readers say “Yehupetz,” with an oo vowel after the h. But the oo sound of standard Yiddish, which is an amalgam based mainly on the northern Yiddish of Lithuania, Belarus, and part of Poland, is an ee sound in the southern Yiddish of Galicia and Ukraine. “A gutn shabbes!” says the Lithuanian Jew, wishing his friend a good Sabbath. “A gitn shabbes!” answers the friend, a Ukrainian Jew.

Sholem Aleichem was from Ukraine. Raised in the shtetl of Voronkiv, some 30 miles southeast of Kiev, he spoke its Yiddish, as can be heard in the few recordings that have survived of him reading short sections of his work in a wonderfully vibrant voice that almost seems to twinkle. Thus, for instance, in a 57-second disk made in 1915 of the beginning of his monologue Ven ikh bin Rotshild (“If I were Rothschild”), he can be heard pronouncing the word שטוב, “home” or “dwelling,” not shtub as in standard Yiddish but shtib.

One should point out, of course, that there was no such thing as standard Yiddish in Sholem Aleichem’s time. The attempted standardization of the language was the work of YIVO, the prestigious Yiddisher Visnshaftliker Institut or “Jewish Research Institute” established in Vilna in 1925—which makes it prescient of the fictional narrator of “If I Were Rothschild” to dream, when he is rich, of founding “a Jewish academy, naturally in Vilna, to which would come the greatest scholars and wise men in the world.” Can it be that he actually struck it rich and founded YIVO? Even if he didn’t, Sholem Aleichem, one imagines, would have said Yehipetz and not Yehupetz, just as he said shtib and not shtub.

But is this what he did? Although there is no direct evidence of how he pronounced the name, one must take into account the little-known fact that he did not invent it. The credit for that goes to his great predecessor, the Yiddish novelist Sholem Yankev Abramovitsh, better known to his readers as Mendele Mocher Seforim or Mendele the Book Peddler. In Mendele’s novel Fishke der Krumer, “Fishke the Lame,” there is a comic scene in which Mendele, while looking for a friend lost in the forest, takes a few sips too many of the brandy in his knapsack and tipsily debates what direction to proceed in. “There were now,” he relates, “two different Mendeles, one stumbling toward Yehupetz and the other toward Boiberik. My legs, which were formerly partners, had lost their marbles and couldn’t decide which should follow which.”

Mendele, though born and raised in Lithuania, spent much of his life in the Ukraine, its last decades in Odessa, and readers of Sholem Aleichem will recognize both these place names, the Boiberik of Tevye the Dairyman being a village in which wealthy Yehuptzians have their summer dachas. In Fishke the Lame, on the other hand, we are given no indication (apart from their adjoining the forest in which Mendele is looking for his friend) of where either of these places is, or of whether one is bigger or smaller than the other, or of whether they represent real locations at all. There is certainly no reason to think that Mendele’s Yehupetz is meant to be Kiev. (The one large town in Fishke the Lame, which is also clearly not Kiev, bears the fictional name of Glupsk.)

In a word, Sholem Aleichem borrowed from Mendele the imaginary names Yehupetz and Boiberik and put them to work for his own purposes. (The Boiberik of Tevye the Dairyman was modeled by him on Boyarka, a village 100 miles southwest of Kiev in which he resided at one time.) But Mendele was a Litvak, a speaker of Lithuanian Yiddish, and would have said Yehupetz, not Yehipetz. Possibly Sholem Aleichem, who venerated Mendele as a writer, would have chosen to emulate him in this.

Or possibly not. One way or another, today we say Yehupetz. And although “Yehupetz” has sometimes been used by Yiddish and Yinglish speakers to designate a remote Anywhere, a kind of East European Podunk, this is not what it is for Tevye and Menachem-Mendl. It is Kiev—the besieged, pummeled, frightened, heroic city for which, as for the country of which it is the capital, we now pray.

The World Knows It as Kiev or Kyiv. To Jews, It's Yehupetz.