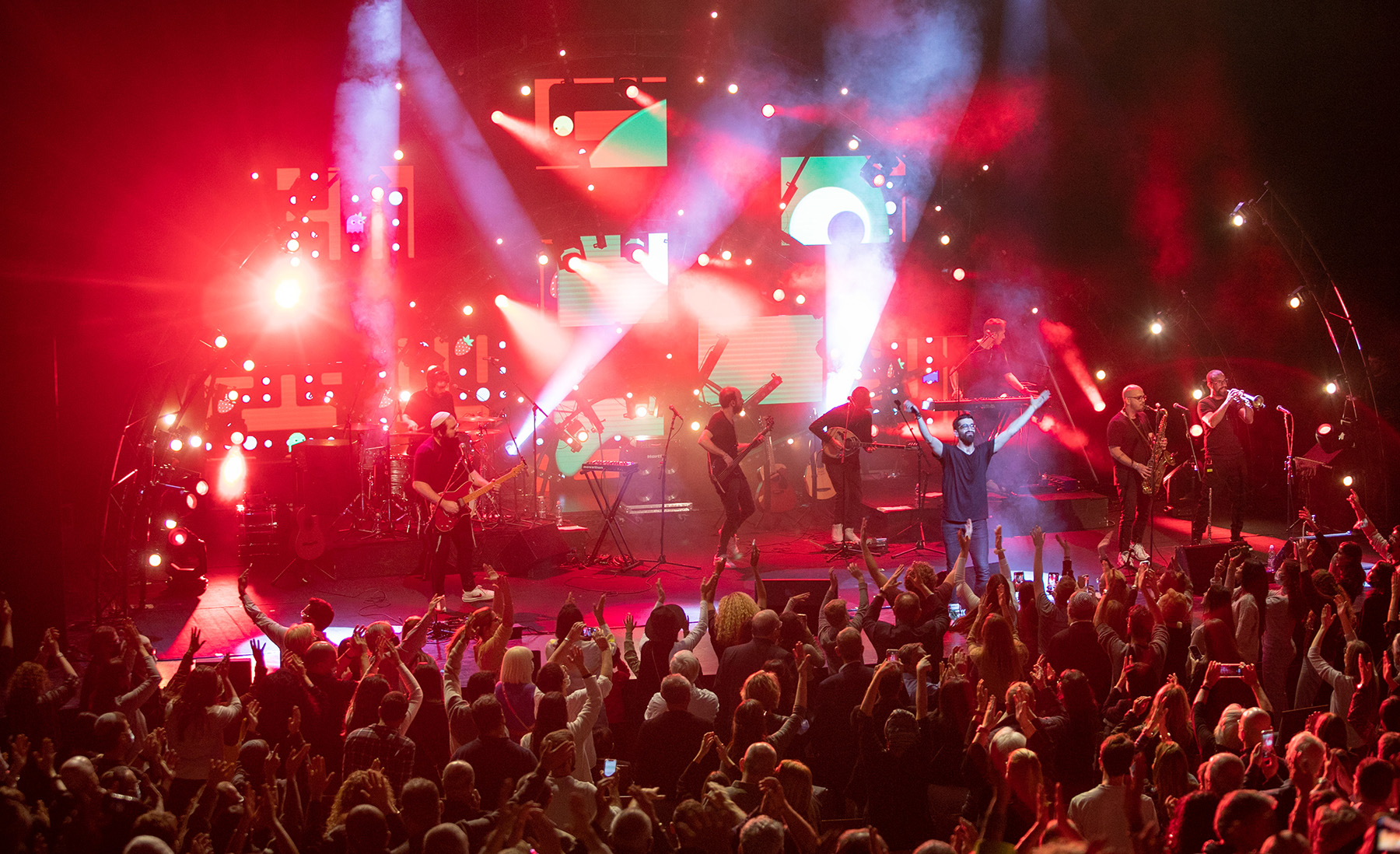 This past Sukkot, a crowd of about 500 children, parents, and grandparents gathered in the Recanati Theater in the Tel Aviv Museum of Art. The audience was made up of affluent and mostly secular residents of north Tel Aviv and its suburbs—stylishly dressed, sipping lattes and organic juice sold at the trendy coffee shop nearby. To an outside observer, the scene would be almost indistinguishable from a family-oriented play or concert in Park Slope, Brooklyn. The content, however, was distinctly Israeli: a jukebox musical called Aluf ha-Olam (literally, “Champion of the World”), based on the songs of the religious Zionist singer Hanan Ben-Ari, written and performed by Israel’s most prestigious children’s dramatic company, the Orna Porat Theater. Tickets for Aluf ha-Olam are in high demand and sell out quickly, so I booked seats for me and my children several months in advance. One could sense from the anticipation in the theater that many others had done the same.

Hanan Ben-Ari is one of Israel’s best-known musical performers, albeit without the international break-through appeal of peers like the religious music sensation Ishai Ribo. His strength is in his songwriting; catchy tunes, drawn from eclectic influences, and coherent, powerful lyrics that comment on personal, often spiritual, struggles. He is an unabashed product of the religious Zionist community, and a wholesome father of six who always sports a knit kippah. Raised in the settlement of Karnei Shomron, he is the nephew of the former Knesset member Michael Ben-Ari, who co-founded the political party Otzma Yehudit, now led by Itamar Ben-Gvir.

Hanan Ben-Ari’s songs pay frequent homage to his Sephardi heritage, though in his music he describes himself more specifically as being of Persian, Afghan, and Hungarian descent. In a song called “Balance” he sings: “of all the diasporas whence I came/ You could make a continent.” His 2015 breakout hit “Strawberries,” which simultaneously laments and celebrates the difficulties of living in modern Israel, presents a mash-up of Mizraḥi beats and the classic Hebrew folk song “Thank You” by Uzi Hittman. A recent hit, “Hanania,” is a tribute to his Afghan grandfather, a pious Jew who wears an outdated suit, only uses cash, always has liturgical poems (piyyutim) on his tongue, and in his very being is “more Zionist than Ben-Gurion.”

Part of what makes Ben-Ari so accessible to a large cross-section of Israelis, both secular and religious, is his self-awareness. In “Wikipedia,” perhaps his biggest hit, he enumerates the various stereotypes associated with each segment of Israeli society: “all leftists are traitors/ all Arabs are terrorists/ all Ḥaredim are thieves/ all settlers killed Yitzḥak Rabin,” and then calls for less prejudice, and more respect for the individual:

Forget everything you know about me today
I am not the “settler guy.”
I am not God’s representative . . .
I am not the bridge between sectors
I wish the sectors would disappear.

Although this conclusion might seem banal, even cliched, to American ears, the song provoked criticism in some Orthodox circles for its seeming disregard for Jewish law and religious distinctiveness in favor of a kind of amorphous, borderless identity. Whatever the merits of such criticism, Ben-Ari’s songs aren’t religious so much because of their content as because they are permeated with Jewish sacred imagery. Take, for instance, his use in “Wikipedia” of the phrase Or Ein-sof, literally the Light of the Infinite One—a kabbalistic term for the radiance of God’s unknowable essence: “I am everything/ I am nothing/ Infinite Light wrapped in a body/ don’t put me in a cage.”

Ben-Ari’s penchant for infusing lyrics about universal topics with the language of the synagogue and yeshiva tends to obscure the boundaries between sacred and secular idioms. His 1980s-inspired feel-good ballad “Dream like Joseph,” for instance, argues that every story in the Bible reflects some basic human experience: “everyone leaves his father’s home/ everyone nearly sacrifices his child/ deep within is a little Sodom/ that he wishes to erase already/ and angels will rescue him.”

Thus the prospect of translating Hanan Ben-Ari’s music into an Israeli secular vernacular, as Aluf ha-Olam seeks to do, is daunting, and perplexing. It raises the question of whether Ben-Ari’s biblicism and Jewish allusions are charming embellishments or so central to his work that they cannot be disentangled from it. But merely to ask this question is to acknowledge that Israeli society’s shared cultural touchstones appear to be growing more and more Jewish, and traditional lines between the secular and religious populations are fading, particularly in the realms of music and art.

The play Aluf ha-Olam centers on a high-school-age brother and sister who move to Tel Aviv from a quiet town in proletarian southern Israel after the death of their mother. Tom is an awkward musician who used to play in a Beatles cover band and now seeks to join a more sophisticated school ensemble under the guidance of an American-accented has-been rocker who wears flannel shirts and jeans. Shira is deaf and a talented poet who is constantly scribbling in her notebook. When Tom’s bandmates cajole him to come up with original song lyrics and he cannot deliver, he takes Shira’s poetry without permission and puts it to music. The results are iconic Hanan Ben-Ari hits like “Wikipedia” and “Aluf ha-Olam,” which become the soundtrack of the play in ways that artfully reflect the plotline.

As with other productions of the Orna Porat Theater, the dialogue is engaging both for youth and their parents. While twelve-year-olds may not appreciate that the baby-boomer music teacher’s platitudes—“every person is a diamond,” “you just need to find your voice”—are being played for laughs, their parents will certainly chuckle. When one of Shira’s classmates makes a patronizing effort to befriend her, she scribbles a note to him that says, “I may be deaf, but you’re dumb” (likely an intentional allusion to the English pun). Yet over the course of the play, even the less-sympathetic characters are revealed to have emotional depth and virtuous qualities. Through its final moments of revelation and reconciliation between the siblings, the play deftly draws the audience into the inner lives of its protagonists.

As with many Israeli theater productions, sophisticated video projections are integrated into the scenery, giving it a depth beyond its otherwise minimalist, though meticulously outfitted, revolving set. Actors double up on roles, so that the American music teacher seamlessly transitions into Tom and Shira’s grieving father. Most impressive and compelling by far is Shira’s ability to communicate her thoughts to the audience without speech, through physical gestures, facial expressions, and the scattered responses of those of her family members who understand sign-language. In choosing to have Shira sign without subtitles or another character translating, the play makes a point about art’s capacity to transcend language and cultural barriers. The audience becomes a participant in her own adolescent struggle to make sense of her emotions.

Aside from the lyrics of the Ben-Ari songs, the play’s actual Jewish content is rather slim. Shira’s nickname in sign-language is “Shir HaShirim” (Song of Songs). The two teenagers in one scene longingly reminisce about their mother’s Shabbat cooking, though the conversation seems primarily like a way to introduce the Ben-Ari song “Mother if I Could”: “Mother, if I could only/ cure the longing/ The memories still burn the brain/ Love did not win, neither did the spirit…” The original song connects these emotions to the ancient yearning for the destroyed Temple in Jerusalem. But in the context of Aluf ha-Olam, it loses these biblical and national resonances, emphasizing instead how feelings of sorrow and loss can inspire artistic creativity. Yet a sensitive viewer may see this reimagining not as an abandonment of the lyrics’ true meaning, but as an invitation to confront the significance of such divergences.

In general, children’s theater has an outsize presence in Israel, no doubt a result of the enthusiasm for the stage brought by Central and East European immigrants during the early years of statehood, and embodied in the storied ha-Bimah and Cameri theaters. When the famed Israeli actress and German convert to Judaism Orna Porat (born Irene Klein) founded the children’s theater that now bears her name in 1970, it was immediately afforded respect by the cultural establishment. Nowadays before national holidays, particularly Hanukkah, advertisements for children’s productions taking place all over the country overrun periodicals. The Orna Porat Theater—responsible for producing Aluf ha-Olam—alone puts on twenty new plays every year, which, it reports, draw in an annual audience of 400,000, an impressive feat in a country as small as Israel. School- and pre-school-age children regularly board buses during school hours to enjoy any of the dozens of productions being staged at any given time, and community centers in towns and cities throughout Israel host them for both adults and children.

These plays usually present renditions of classic Hebrew stories like Room for Rent by Leah Goldberg, or revised and reimagined versions of international classics like Aladdin or the Wizard of Oz. But there have also been any number of original productions, such as Aluf ha-Olam or Eli, about the legendary Israeli spy Eli Cohen. There are also performances based on biblical stories and the Jewish holiday cycle.

When it’s not a national holiday, such performances, even the explicitly Jewish ones, are typically held on Shabbat. This makes it difficult for religiously observant children to attend, creating a feedback loop that encourages producers to gear their work toward a secular audience. Yet sometimes the loop is disrupted, as in the case of Aluf ha-Olam. Ben-Ari himself may have had a hard time finding a performance he could attend with his own children. But if secular pop-creations that riff on traditional religious culture—rather than the other way around—continue to gain traction, schedules might start to change.

Aluf ha-Olam was written by Liat Fishman Leni and Shlomit Arnon Bar-Lev, who together have composed numerous successful plays for both children and adults, ranging from popular works to more highbrow fare. One of their most recent plays, Ba’alat ha-Bayit (“The Landlady”)—based on the 2014 novel of the same name by Noa Yadlin—examines the crisis of an elite, secular, Ashkenazi family. Its members are thrown into disarray when they discover the financial misdeeds of the matriarch, who is the director of a left-wing pro-peace organization in Jerusalem. The play explores what happens when those who compulsively project political and moral superiority display unethical conduct themselves. It’s also a subtle indictment of the once pre-eminent Israeli secular left, which is losing ground every day in both the political and cultural arenas. By contrast, Aluf ha-Olam offers a feel-good generic message that can appeal to secular and religious alike, but with an upbeat Mizraḥi-religious pop soundtrack. Taken together, the play about the bankruptcy of the old elite and the musical about the vibrancy of the Mizrahi, religious, and working-class culture that elite once turned up its nose at sum up the direction of Israeli society—and politics—in the 21st century.

One theme of Aluf ha-Olam, particularly apparent in the placement of a deaf character in the central role, is the question of how a single voice, even an unconventional one, may be harnessed to speak for something much larger than itself. Much in the same way, Ben-Ari’s music, although rooted deeply in the perspective of the religious-Zionist sector of society to which he belongs, has always appealed to a wide swath of the Israeli population, young and old, religious and secular, Sephardi and Ashkenazi, just as the play itself is attempting to do. The fact that an elite institution like Orna Porat is trying to appeal to a broad audience with a voice born and bred in Karnei Shomron rather than Tel Aviv, whose owner wears a yarmulke rather than a tattered Nirvana T-shirt, is certainly part of the continuously unfolding and ever-surprising Israeli national story.