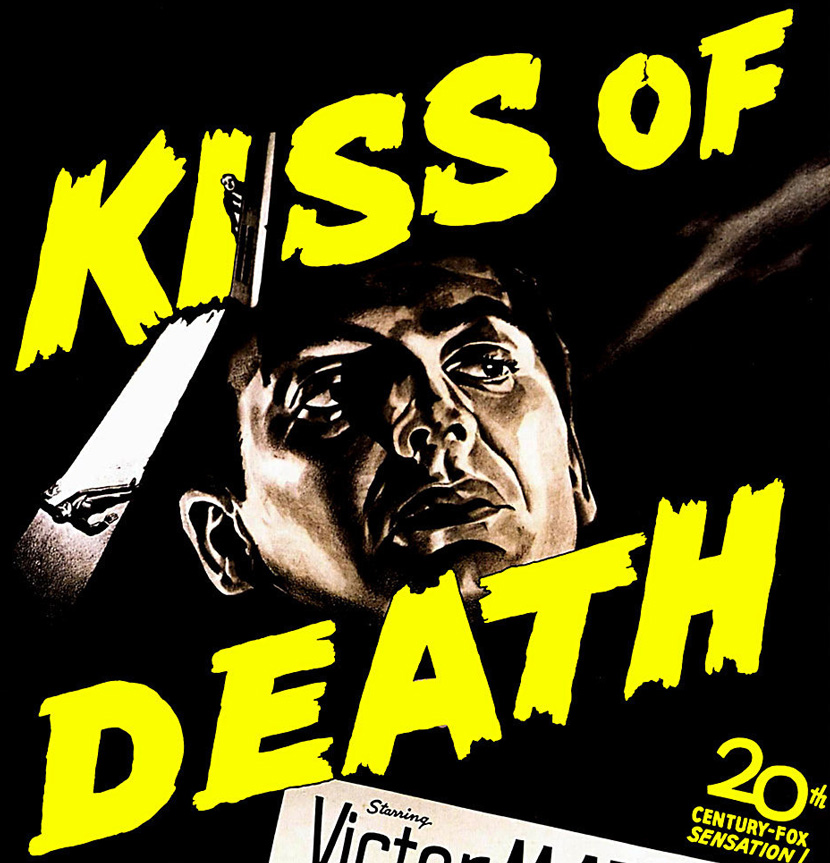 From a poster for the 1947 movie Kiss of Death.

“The Kiss of Death and the Google Exec” was the name of a January 24 documentary shown on 48 Hours, a long-running CBS series featuring a weekly story about a crime, scandal, or mystery in the news—in this case, the alleged 2013 murder of a hi-tech executive by a California call girl now on trial for committing it. This was not the first film thus titled. That was the 1947 Twentieth Century Fox gangster thriller Kiss of Death, directed by Henry Hathaway and co-written by Ben Hecht. The latter’s passionately pro-Zionist A Flag Is Born, with the unknown young Marlon Brando in its cast, had played on Broadway the year before.

In ordinary language, of course, a “kiss of death” refers neither to an actual kiss nor an actual death; rather, it denotes something that spells a person’s or an undertaking’s doom. Its original meaning, however, is generally assumed to have been literal and to have come from the New Testament story about Judas, who accompanied the Jewish officials sent to arrest his master Jesus on Jerusalem’s Mount of Olives following the Passover seder known as the Last Supper. As related in the Gospel of Mark: “And he [Judas] that had betrayed [Jesus] had given [the officials] a token, saying, ‘Whomsoever I shall kiss, that same is he.'”

Mark’s account, to tell the truth, is not quite logical, for if, as we are told, Judas arrived on the scene at the head of Jesus’ apprehenders, such a secret signal served no purpose; having already exposed himself as a traitor, he could just as well have pointed to Jesus and said, “That’s him.” Yet whether Mark misunderstood what happened, or whether Judas wished to kiss Jesus a sorrowful goodbye because even in his perfidy he loved him, or whether the kiss was invented by early Christian tradition to make Judas look even more diabolical, most contemporary English dictionaries agree that “kiss of death” owes its origins to this source.

But does it? Consider the following.

First, although one would expect a phrase deriving from the New Testament to have ancient or early-medieval roots, the first documented appearance of “kiss of death” in English dates to 1944, three years before the Twentieth Century Fox movie—and then, in a context far removed from Christianity. This was an item in the weekly pop-music newspaper Billboard, which, under the caption “Amusement Biz Booming in War Work Center But Bands Losing Out On Dollar Divvy,” published a story from Philadelphia about the low pay given musicians despite the wartime prosperity. The problem, Billboard reported, was less acute for the big, nationally known bands, but if the job-seekers were Philadelphians who “carry a local tag, it’s the kiss of death as far as price is concerned.”

Second, it’s widely accepted that “kiss of death” was brought to America by late-nineteenth- or early-twentieth-century immigrants from Sicily, where, as bacio della morte, it was a Mafia term. In his Mafia Encyclopedia, Carl Sifakis defines the bacio della morte as a way of informing “an opponent by a kiss on the lips that his days are numbered,” and mentions the celebrated kiss supposedly given in an Atlanta penitentiary by crime boss Vito Genovese to his fellow mafioso Joe Valachi, who was so frightened by it that he turned state’s witness in a bid for protection. Wikipedia agrees, citing the 1972 Hollywood movie The Valachi Papers and a scene in Part II of the The Godfather in which Michael Corleone, the son of the legendary Mafia capo played by an older Brando, kisses the lips of his brother Fredo after commissioning his murder. Yet Wikipedia then hedges by adding: “However much is based on fact and however much on the imagination of authors, it [the kiss of death] remains a cultural meme and appears in literature and films.”

Third, Italian sources suggest that there may be good reason to hedge. On the one hand, the Neopolitan psychiatrist and criminologist Corrado De Rosa writes that in the Sicilian Mafia, “a kiss on the hand is a sign of fealty, one on the cheek of fraternal solidarity, and one on the lips of condemnation to death.” But De Rosa is an expert on the Camorra of Naples, not on the Mafia, and the Internet word site Cosa Vuol Dire states that the bacio della morte of the Sicilian Mafia is traditionally given not to the intended victim of an assassination but to his appointed assassin, “in order solemnly to seal the sentence and wish its executor success.” Although Italian speakers, too, Cosa Vuol Dire observes, commonly use the expression in the sense of the kiss of Judas, “this is a mistake.” The Internet Dizionario Italiano concurs with this, while still other Italians writing on the subject, unable to quote anyone in the tight-lipped Mafia, are reduced to citing American movies as their authority.

This leaves us, I would suggest, with a number of tentative conclusions: 1) “Kiss of death” in the sense of an act or occurrence that dooms is a recent idiom in both English and Italian; 2) The Mafia’s bacio della morte was a kiss given to a designated “hit man” and had nothing to do with the New Testament story of Judas; 3) The expression was indeed brought by Sicilian immigrants to America, where it was confused with Judas’s kiss; 4) The first documented evidence of this confusion, applied figuratively to the Philadelphia music scene, is found in the 1944 issue of Billboard; 5) Reapplied literally to the Mafia, the same confusion became a “cultural meme,” as Wikipedia calls it, and even fooled experts like Carl Sifakis and Corrado de Rosa; 6) Today, Judas’s kiss and the bacio della morte have merged inseparably in popular speech.

None of which, I might add, is related to the Hebrew expression mitat neshikah, “death by a kiss.” But that’s a story for another day.