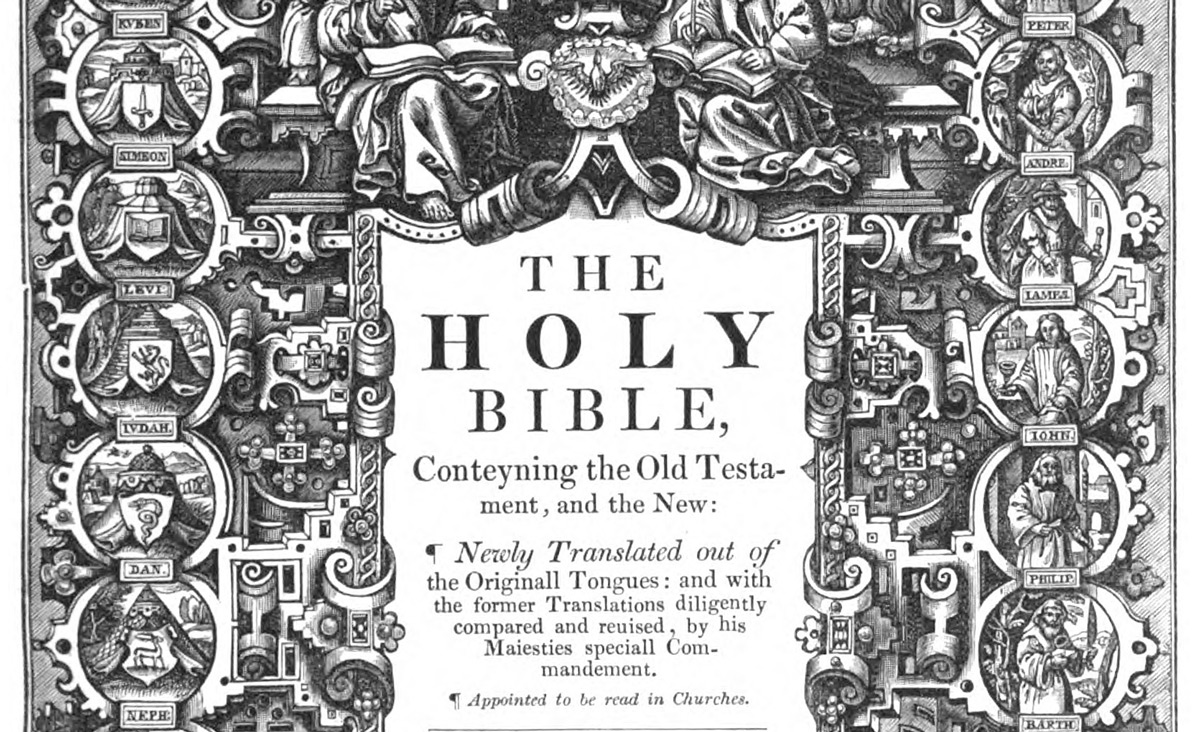 From the cover of a 1611 edition of the King James Version of the Bible.

Stephen M. Flatow asks why, in my column “The Paradox of the Transmission of Sacred Texts” that appeared two weeks ago, I used the King James translation when citing verses from the Bible. “Are there,” he asks, “no Jewish translations, such as the Jewish Publication Society’s, Soncino Press’s, or ArtScroll’s, that would have served a similar purpose?”

Yes, there are. The reason I nevertheless prefer the King James Version (KJV) is that, despite its age, its archaic English, and its often outdated interpretations of passages that subsequent knowledge has thrown new light on, it continues to be the best English Bible translation in existence.

This is, of course, a matter of taste and opinion, but the taste and opinion are not just mine. Millions of English-speaking Bible readers share them, which is why in 2013, the most recent year for which there are data, the 400-year-old KJV continued to outsell all of its numerous modern competitors but one. (That one is the New International Version of the Bible, first published in the course of the 1970s.) These millions of readers would agree with Adam Nicolson, who states in his God’s Secretaries: The Making of the King James Bible that, more than any other English translation of Scripture, the KJV is driven by an “idea of majesty” whose “qualities are those of grace, stateliness, scale, [and] power.” What its admirers sense in it above all, writes Nicolson, is what they sense in the Hebrew Bible itself: “a belief in the enormous and overwhelming divine authority” of the text.

I do not sense this, or feel the same “grace, stateliness, and power,” in other Bible translations, including the ones mentioned by Mr. Flatow. True, those translations were produced by Jewish scholars for a Jewish readership, whereas the King James’s translators were Christians with Christian concerns. Yet these concerns almost never led them to distort the meaning of the text for polemical or anti-Jewish purposes, and even in the handful of cases where it might be argued that they did so, it is possible to defend their choices. Thus, for example, in the famously disputed verse from Isaiah, “Behold, a young woman [alma] shall conceive and bear a son and call him Emmanuel,” the King James adheres to Christian tradition by translating alma as “virgin,” turning the verse into a prophecy of Jesus’ birth. Yet given that in biblical times no respectable unmarried young woman—which is apparently what alma denotes—could have been anything but a virgin, this is not a totally outrageous reading.

Let’s look at the two verses I cited in the column Mr. Flatow refers to. In the original Hebrew they are: Adonai b’ozkha yismakh melekh; uv’yeshu’atkha ma-yagil me’od. Ta’avat libo natata lo; va’areshet s’fatav bal-mana’ta (Psalms 21:2-3). The King James has: “The king shall joy in Thy strength, O Lord; and in Thy salvation how greatly shall he rejoice! Thou hast given him his heart’s desire, and hast not withholden the request of his lips.” In the 1917 Jewish Publication Society translation, this is: “O Lord, in Thy strength the king rejoiceth; and in Thy salvation how greatly doth he exult. Thou hast given him his heart’s desire; and the request of his lips Thou hast not withholden.” The Soncino Press version uses the 1917 JPS text. The new 1985 JPS translation gives us: “O Lord, the king rejoices in Your strength; how greatly he exults in Your victory. You have granted him the desire of his heart, have not denied the request of his lips.” The 1996 ArtScroll has: “O Lord, may the king rejoice with Your strength, and how greatly does He exult with your salvation. You gave him his heart’s desire, and the speech of his lips you have never withheld.”

All four of these versions are highly similar. A cursory look at them demonstrates that the last three were influenced by the King James. Indeed, the 1917 JPS translation basically is the King James, with minor variations. Why not, then, go with the original?

The 1985 JPS version departs from the King James more—but not, I would say, for the better. “Your victory” is a less accurate and more confusing rendering of yeshu’atkha than “Your salvation”—God’s victory over what or whom?—and the dropping of the Hebrew connective v’, “and” or “but,” which regularly joins the two hemistiches of each line of Hebrew verse, sanitizes an important feature of biblical style in favor of more conventional English usage. The ArtScroll version is no improvement. To say that God has withheld not the “request” (areshet) of the king’s lips but their “speech” means that He has let the king speak freely, not, as the Hebrew states, that He has granted him his wishes. And since when does one rejoice or exult “with” something in English? One can rejoice with someone, but one rejoices in something.

These are minor points, I admit, but they are indicative of the KJV’s overall superiority, which derives in part from its being the product of a historical period in which the Bible’s divinely revealed character and literal truth, every word of which was assumed to matter supremely because it was God’s, were still taken for granted by most people, including the King James’s highly cultivated and sophisticated translators.

Indeed, the KJV’s archaic language, often cited as a point against it, strikes me as one more argument in its behalf. The language of the Hebrew Bible, after all, is archaic, too; it is precisely this that makes us feel when reading it that we are in contact with an age more wondrous and fervent than our own. The same holds true of the KJV. We should not want the Bible to sound modern. Of modernity we have more than enough; the Bible needs to be read against modernity’s grain. I’ll stick with the King James.