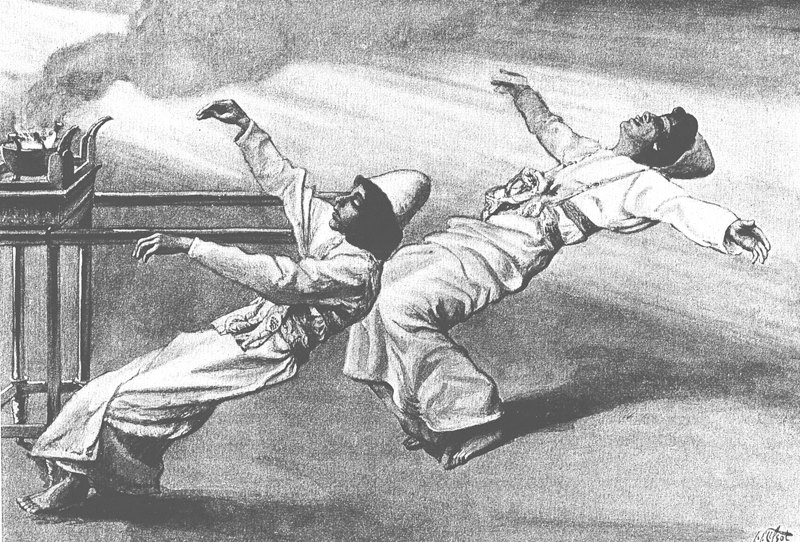 From The Death of Nadav and Avihu by James Tissot.

Though not himself an Orthodox Jew, Israel’s president Reuven Rivlin has “failed miserably when it comes to having good relations with practicing Jews who are not Orthodox.” So writes the Israeli political commentator Shmuel Rosner in a June 10 New York Times op-ed. As an example of Rivlin’s “troubling track record” in this area, Rosner cites his having once referred, long before becoming president, to Reform Judaism as “idol worship.”

Did Rivlin really say such a thing? It would have been stupid of him to have done so, since whatever sins Reform Judaism can be accused of, worshiping idols in its temples is not one of them. And yet that he said it would seem to be a matter of record. In 1989, according to a recent Jewish Telegraphic Agency dispatch, Rivlin, then a Knesset member from the Likud party, commented after attending his first Reform service in a New Jersey synagogue:

As a Jew who does not observe [the] 613 commandments and perhaps not even 13 commandments, I was deeply shocked. . . . I felt as if I were in a church. I was completely stunned. This is idol worship and not Judaism.

Guilty as charged? Not exactly. These remarks were not made in English. They were made in Hebrew after Rivlin’s return to Israel from the United States—and a quick check reveals that, as any knowledgeable Hebrew speaker might have guessed, the seemingly outrageous words in question were the Hebrew term avodah zarah. Although this does mean idol worship, it can also mean other things, and it was clearly intended by Rivlin to mean them.

Literally, avodah zarah translates as “foreign worship.” While a rabbinic rather than a biblical expression, it has biblical roots in the story in Leviticus about Nadav and Avihu, the two sons of Aaron who are consumed by flames when they enter the Holy of Holies without permission to make an offering of incense that the Bible calls “foreign fire” (esh zarah). Taking the biblical adjective, the early rabbis gave the name of Avodah Zarah to a tractate in the Mishnah dealing with the worship of idols and the restrictions imposed on all assistance to its practitioners.

Inasmuch as, prior to the rise of Christianity and Islam, ancient Judaism’s main rivals were pagan religions that venerated physical representations of their gods, whether man-made or natural, avodah zarah originally designated all non-Jewish faiths. Indeed, even Christianity, because of its widespread use of icons, fell under its rubric. Maimonides (1138-1204), the most authoritative of all medieval halakhic commentators, ruled that Christians, too, were idol worshipers and that the rabbinic regulations in Avodah Zarah applied to them as well.

Islam, however, was a different case. A religion at least as iconoclastic as Judaism, if not more so, it could hardly be considered idol worship in the traditional sense, and Maimonides ruled that it was not and that Jews’ relations with Muslims need not be subject to the fear of abetting avodah zarah. For the same reason, he was of the opinion that a Jew may permissibly save his life by converting under compulsion to Islam but not to Christianity.

But although the majority of medieval rabbinic jurists agreed with Maimonides, not all did. The prominent Spanish rabbi Yom Tov ben Avraham Ishbili (1250-1330), to take one, maintained that conversion to Islam was also “foreign worship,” since the term avodah zarah covered not just the worship of idols but all denial of the God-given truth of the Torah. Similarly, the great Spanish talmudist Nissim ben Reuven Gerondi (1310-1375) wrote that even though Muslims did not pray to idols, their bowing in prayer to the God of the Quran was akin to idol worship and should be classed with it “in every respect.” This position had not a few supporters.

Thus, already in pre-modern times avodah zarah came to mean for some commentators any form of false religion, whether literally idol worship or not. Such a usage has become even more prevalent in modern times. Here, for instance, is the Israeli theologian Yeshayahu Leibowitz (1903-1994) writing about the biblical account of Moses’ smashing of the Tablets of the Law upon descending from Mount Sinai and seeing the Israelites worshiping the Golden Calf:

To smash [the practice of] avodah zarah is to refuse to sanctify anything that is not directed toward the worship of God—anything involving values arising from [purely] human needs and interests. . . . The essence of belief in God is to believe in nothing that is not divine.

Writing in French, Leibowitz’s equally prominent Orthodox contemporary Emmanuel Levinas (1906-1995) even extended the concept of avodah zarah to a blindly literalist reading of the Torah itself:

A Jew . . . identifies as a student of the Torah by being a commentator on it and is thus protected from the idolatry [avodah zarah] of learning. In this manner, the text [of the Bible] defends itself from becoming an object of avodah zarah.

There is indeed a parallel between this extension of the meaning of avodah zarah and the development of the word “idolatry” in English: a word that, starting with the philosopher Francis Bacon’s “four idols of the mind” in his Novum Organum (1620), has increasingly been applied to any religious-like devotion to an essentially non-religious cause or pursuit. Thus, we speak today of “the idolatry of sex,” “the idolatry of money,” and so forth.

There can be no doubt that it was in this sense that Reuven Rivlin referred to Reform Judaism as avodah zarah. One may, needless to say, challenge his judgment, but to imply, as does Shmuel Rosner, that he was classing Reform practice with the pagan religions of antiquity, or with the iconology of the Catholic church, is unfair and misleading. Israel’s president is not a stupid man.