The False Ideas in the Phrase "Jew by Choice"

Now used to describe converts to Judaism, the term misleadingly suggests that Jewishness inheres more in certain selective beliefs than in Jewish peoplehood. 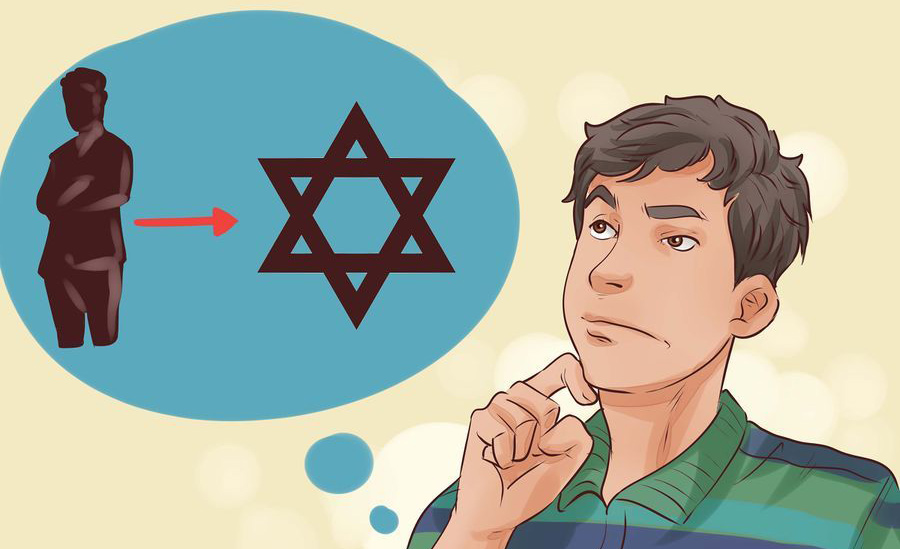 Browsing on the Internet the other day, I came across a recent blog on the Jewish feminist website Lilith entitled “Why I Hate the Phrase ‘Jew by Choice.’” Never having cared for it, either, I took the time to read the piece. Its author, Amelia Dornbush, is herself a “Jew by choice,” as converts to Judaism have increasingly come to be called in the United States. I don’t know when this phrase got its start—probably sometime in the 1970s or 80s. Its popularization is no doubt connected to the dramatic upsurge of intermarriages in American Jewish life, which has led to conversions to Judaism on a scale not seen since the early days of the Roman empire.

In times like our own, “convert” has struck many Jews, whether themselves converted or not, as an objectionable, or at least inadequate, term. The word (from the Latin verb convertere, to turn around or turn in the opposite direction) has traditionally denoted someone who has renounced a former, false mode of belief or existence for a new, truer one espoused by others. Yet becoming Jewish is now experienced by many as a way of becoming truer to themselves without repudiating who they have been. “Jew by choice,” it is felt, is a phrase that honors such a decision while emphasizing that, having made it, one is the equal of any other Jew and should not be characterized by a word that marks one as a neophyte.

What, then, does Amelia Dornbush have against “Jew by choice”? Mainly, she writes, that it creates

a false binary between those who choose to be Jewish and those born with Judaism [as their inheritance]. Not only does it assume that those who converted had a completely autonomous individual choice to opt-in to Judaism, it implies that those who were born Jewish have no agency in their Jewish identity. This sits poorly with me. I have multiple relatives [via a Jewish father] who would halakhically be considered Jewish, but are not viewed as such by themselves or the outside world.

The phrase “Jew by choice,” Dornbush concludes, though “meant to be affirmational, . . . erases the ambiguities of my experiences and the experiences of so many others. . . . How can I do anything but reject a term that dichotomizes what should be a messy spectrum?”

These are sensible remarks. That a “spectrum” including converts from conviction, converts of convenience, born Jews who live their Jewishness, and born Jews who don’t must be “messy” is undeniable. And yet in what way, one wonders, would calling Dornbush a convert rather than a Jew by choice express this messiness any better? One needs, it seems to me, a better reason for disliking the phrase.

Perhaps the first thing to consider in looking for such a reason is that “Jew by choice” is a copycat expression. Its origins are Christian, not Jewish. Although encountered by some for the first time in President Obama’s 2010 declaration that he, the son of a Muslim father, was a “Christian by choice,” the phrase goes back at least 200 years in Christian discourse.

The earliest use of it that I have been able to find (there may, of course, be older ones) is in a sermon by the British minister Vicesimus Knox (1752-1821), posthumously published in 1824 in a seven-volume collection of his preaching. “Seek Jesus Christ,” Knox told his congregation, “with the earnestness of one who is a Christian by choice, and not merely because he was born in a Christian country or of Christian parents.” The true Christian is he who decides for himself to be one.

But the idea of being “Christian by choice” goes back much farther than Knox. It is intrinsic to early Christianity, which was initially a religion of converts, and though neglected by the medieval Catholic church, it was revived at the time of the Reformation by the Anabaptists. This group, a radical Protestant sect also known as the Christian Brethren, opposed the practice of infant baptism because it purported to make Christians of mindless babies. The first adult baptism performed by a Christian Brother took place in 1525, and Article 1 in the movement’s 1527 Confession of Faith stated that “Baptism shall be given to all those who . . . request it [of the group’s leaders] and demand it for themselves.” A Christian who did not knowingly choose to be a Christian was not a Christian.

And here we get to the crux of the matter. Judaism, traditionally, has not been a religion of choice. It has been conceived of by its followers as a covenant between God and a people whose son or daughter one is. Although an outsider could join this people by being accepted into it, the decision was not just a question of his or her “request and demand.” One could no more choose on one’s own to become a Jew than one could choose on one’s own, say, to become an American, which is why we speak to this day of naturalized American citizens, not of “Americans by choice.”

To speak of “Jews by birth” and “Jews by choice” is thus misleading. It implies an equivalence that, while true in the halakhic realm, in which the convert is every bit the born Jew’s equal and is to be regarded as no less a descendant of Abraham, is not necessarily true in other areas. And yet “Jews by choice” even suggests that such Jews are the more serious ones, just as “Christians by choice” are the more serious Christians. This may be so in some cases—there are certainly, as Amelia Dornbush observes, many converts who take their Judaism more seriously than do many born Jews—but the term conveys a false idea of what Judaism is about.

Judaism is about a people—and no people can be a people, much less remain one, without a sure sense of itself that can in the main be provided only by birth, parenting, and belonging to a community from an early age. One can join a people only if there is a people to join—and only if one understands that choosing to join it is more than a matter of selectively identifying with some of its beliefs. That is the case, for instance, with Gregory Eran Gronbacher, another blogger who has converted. Gronbacher is being honest when he writes on the website Patheos that, like many “Jews by choice,” he doesn’t feel part of a people. He has, he writes, “engaged in Judaism solely as a spirituality; as a religion based on convictions concerning human dignity, interconnectedness, love, wisdom, kindness, and justice. For me, Judaism is a worldview that has little to do with ethnicity.”

A Judaism without ethnicity can hardly be called Judaism—and yet it is the kind of Judaism that will spread in an America in which being Jewish by choice and Jewish by birth are thought of as two different versions of the same thing. Jewishness can be a deliberate choice for non-Jews only so long as it is as a welcomed chosenness for born Jews. False linguistic parallelisms obscure that truth.

The False Ideas in the Phrase "Jew by Choice"