The Variety and Universality of Nicknames

Different languages employ different methods of generating nicknames, but they all satisfy the same two needs: to show special affection and to demonstrate special intimacy. 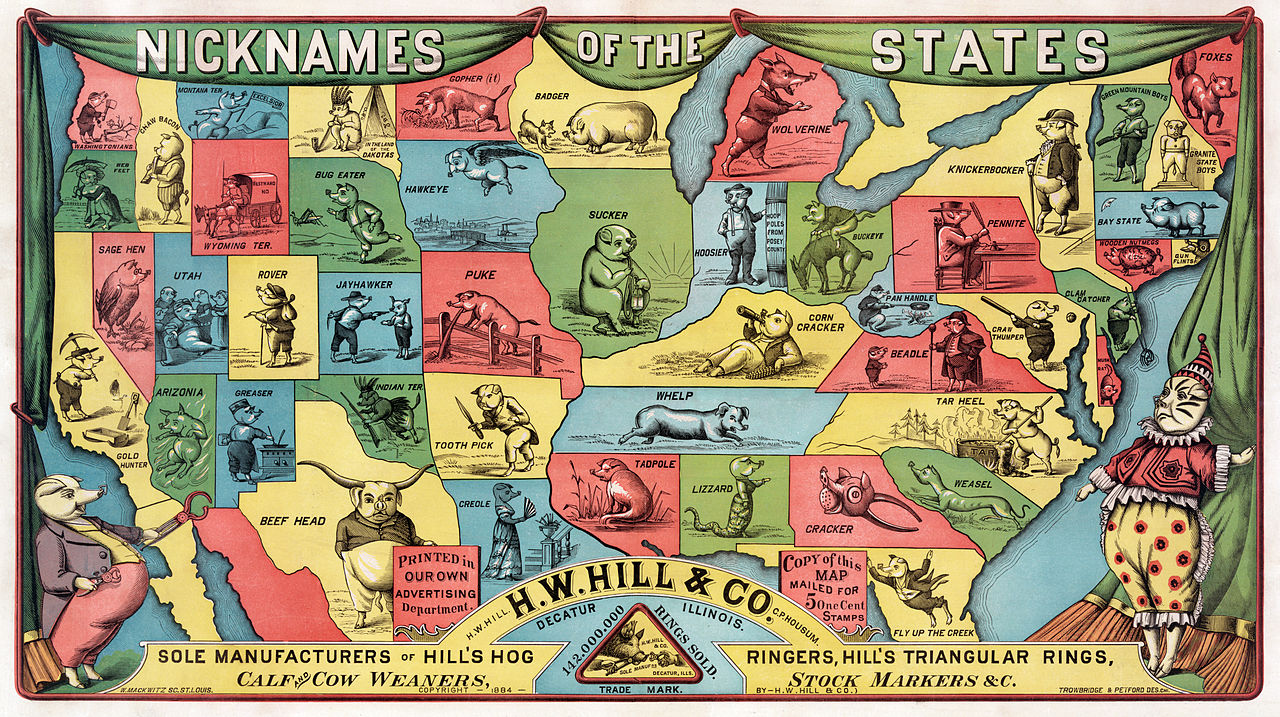 An 1884 of the United States showing the state nicknames. Wikipedia.

Diana Lipton writes from Jerusalem to ask: “What is the origin of the affectionate ‘-ush’ that Israelis so often append to the names of family members and close friends?”

Israelis do indeed do this. Sometimes the endearing ending is “-kush” rather than “-ush.” When they were little, my wife and I often called our elder daughter Talyush (which in turn morphed into Talyushki) and her sister Michalkush, and their own children also get “-ushed” and “-kushed” quite a lot, albeit not with any strict regularity. It’s an endearment that tends to be used by grown-ups for children but less often by children or teenagers for each other, and in most cases it disappears as one grows up. Yet this is not always so; there are adult relationships in which it persists. “-Ush” can also be resorted to spontaneously. If I have a friend named Edna and I wish to be playful or affectionate with her, I might address her as “Ednush” even if I’ve never done it before.

The use of “-ush” as a hypocoristic affix, as nicknames of this sort are known to linguists (the word comes from the ancient Greek verb hypokorizesthai, to caress secretly), entered modern Hebrew from Yiddish. It occurs in Yiddish names like Berush and Leybush (in some dialects Berish and Leybish), whose base forms are Ber and Leyb, and its roots are Slavic. One encounters it in such Polish hypocorisms as Oluś for Aleksander, Jędruś for Andrzej, and Eduś for Edward, and in Russian, followed by a vowel, in Vanyusha for Ivan, Petrusha for Pyotr, Nadyusha for Nadezhda, and so on. The “-ushka” ending is also common in Russian, as in Annushka for Anna, Nastyushka for Anastasya, and Styopushka for Stepan.

In Yiddish, the “-ush” ending is actually not that frequent. More widespread are the Slavic “-ke” or “ka” (e.g., Moshke, Yoske, Sorke, and Blumke for Moshe, Yosef, Sarah, and Blume); the Slavic “-ik” (Shmulik, Itzik, Srulik, and Khilik for Shmuel, Yitzḥak, Yisra’el, and Yeḥiel); and the Germanic “-l” or “-ele” (Avreml, Yankele, Mirl, and Malkale for Avraham, Yaakov, Miriam, and Malka). In some cases, the same name can take more than one of these endings: Moshe, for example, can also be Moyshik or Moyshele. One doesn’t go from one to the other, though. If you’re Moyshik because that’s what you were called as a child, you stay Moyshik and don’t become Moyshele.

Although all these endearments exist in Israeli Hebrew, too, “-ush” has overtaken them in recent decades. Perhaps Israelis like the sound of it better, and perhaps, precisely because it not so common in Yiddish, it is associated less with Ashkenazi culture and more with melting-pot Israel. Interestingly, while it is rarely used in Israel with traditional East European Hebrew names, it is generally the only affix used with Hebrew names that originated in Israel or first became popular there. One wouldn’t think of calling anyone Moshush or Shmulush in place of Moshke or Shmulik, but one also wouldn’t think of calling Smadar Smadarke rather than Smadarush or Omri Omrele rather than Omrush.

Nicknames seem to be universal. They satisfy two needs that given names don’t: the need to show special affection and the need to demonstrate special intimacy. If you’re an American named William Jones, you may be Mr. Jones to those who don’t know you, William to your casual acquaintances, Bill to your friends, and Billy to those you are closest to, although other variations are possible, too. I have a good friend whom I call Bob, though his parents called him Bobby and his wife calls him Roberto. Why Roberto when neither he nor she is Spanish or Italian? Because no one else would dream of calling him that, that’s why.

Different languages employ different methods of generating nicknames, and the same language will often employ more than one of these. English, for example, either substitutes, in a relatively small number of cases, a divergent, less formal form of the name for the given one (Bob, Bill, Dick for Richard, Babs for Barbara, Betsy for Elizabeth) or, more commonly, drops the given name’s last one or two syllables while often adding “y” (Pete for Peter, Larry for Lawrence, Nan for Nancy, Jenny for Jennifer). The French drop final syllables, too, but also double them while dropping first syllables. Thus, André becomes Dédé, Augustin Tintin, Louis Loulou, Julie Juju, Annie Nini.

The Chinese do this, too, although generally only with girls and women: if you’re named Xio-Jing, you may be Jing-Jing to your friends. They also use prefixes, some standard and some fitted to the circumstances: Hua might be called Lao-Hua, “old Hua,” and Li, if he’s overweight, Pang-Li or “fat Li.” The Japanese like to compound first names with last ones: Takehiro Tanaka can end up as Tanetake, and Kirigaya Kazuto as Kirito. (Americans sometimes do this as well, especially with celebrities: think JLo.) And in Arabic, nicknames, known as kunyas, are acquired not in childhood as they generally are in other languages but upon having one’s first child: if you are a man and you name your child Nimr, your kunya will be Abu Nimr, “Father of Nimr,” and if you are a woman, it will be Um Nimr, “Mother of Nimr.” Traditionally, this happens only when the child is male, but in some Arab societies, naming parents for a female first child is now also practiced.

Everywhere in the world, children sometimes acquire family nicknames by the way they pronounced their own names when they were infants. Among my older cousins were a Nummy, an Ucky, and a Boopsy, all nicknamed according to this principle. Sometimes, one has to struggle as one grows up to shed such names, or for that matter, any nickname that one comes to feel is childish or undignified. (I myself had an uncle who always called me Karapuzik, which is Russian, I believe, for something or other, but luckily it never caught on with anyone else.) Of my three Israeli grandchildren, one is regularly called Tamarush by her parents; one is sometimes Elianush; and one often goes by Manu, although I myself like to call him Emanuelshku. Eventually, I imagine, they’ll just be Tamara, Eliana, and Emanuel, which are very nice names indeed.

The Variety and Universality of Nicknames