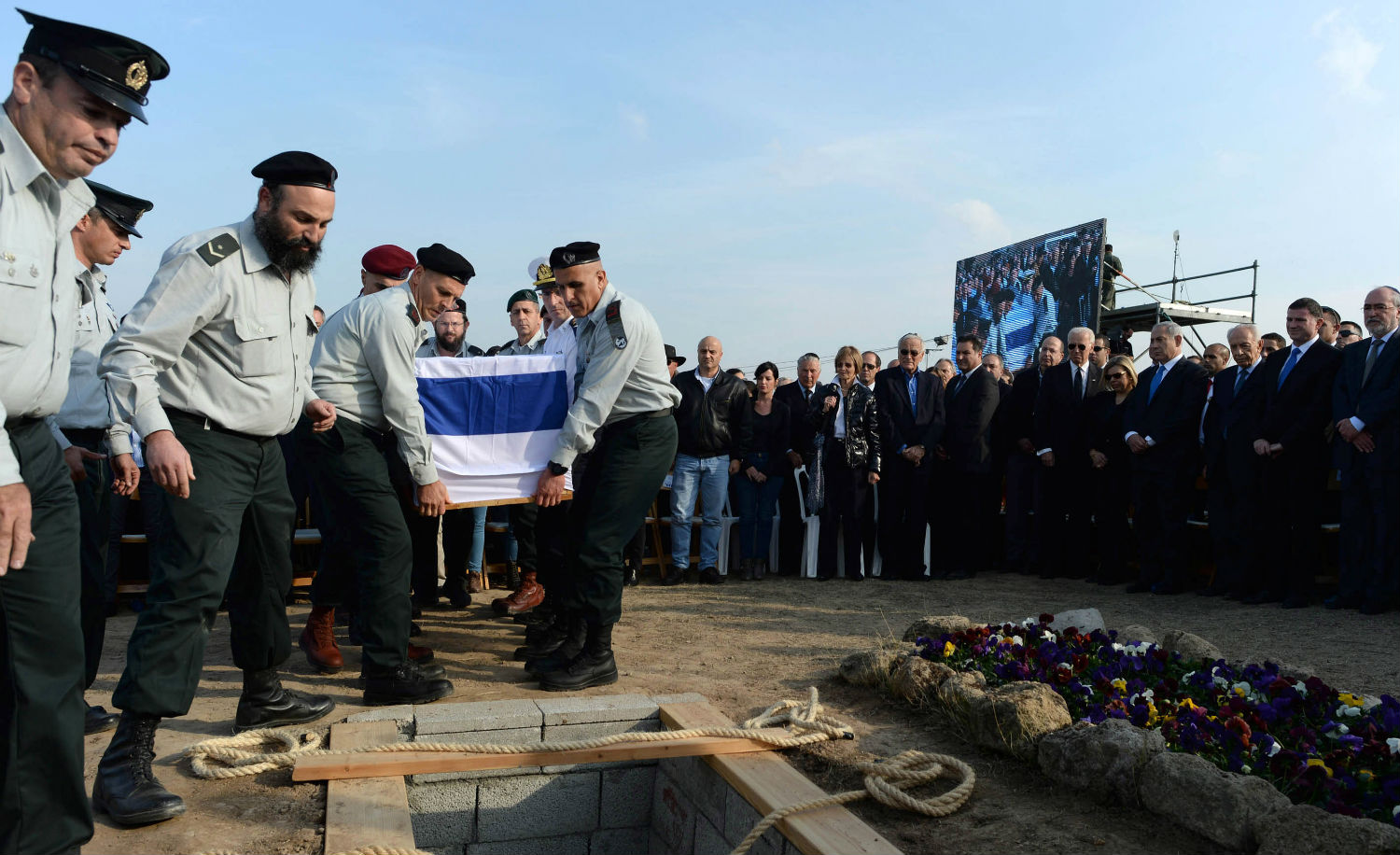 Next Monday, according to the Hebrew calendar, is the third anniversary of the death of Ariel Sharon, the late prime minister of Israel. Thinking about that event has brought to my mind El maley raḥamim (“God full of mercy”), the brief prayer for the departed that is recited at funeral services, on the anniversary (yortsayt) of a death, and on visiting the graves of deceased relatives. Before reverting to Sharon’s death and funeral service, I want to explore the prayer itself.

In the Ashkenazi rite, El maley raḥamim is also part of the memorial service (Yizkor) on the festivals and on Yom Kippur, the Day of Atonement. Rabbi Yissachar Jacobson (1901-1972), a meticulous historian of the prayer book, notes that the prayer entered the memorial service only after the 1648-49 Chmielnicki massacres in Eastern Europe, which explains the many different versions originating in various European communities (Nemirov, Lublin, Prague, etc.). It’s unsurprising that the prayer’s one well-known melody is that of a Polish-Jewish lament:

God full of mercy,
who dwells on high,
furnish fitting rest
under the wings of the divine presence
in the sacred and pure heights,
radiant as the sky’s light,
for the soul of [a], son of [b],
who has gone to the world to come,
because [c] gave alms
for the remembrance of his soul.
Therefore the Master of all mercy
will secrete him in the mysteries of His wings for all time
and bind his soul in the bond of life.
God is his reward;
in Paradise shall be his repose;
and in peace shall he rest.
And let us say: amen.

I personally tend to regard discussions of the immortality of the soul, resurrection, the messianic future, or indeed reincarnation as fringe elements of Judaism. But I also regard the siddur, in which this prayer appears, as Judaism’s most canonical halakhic work, if only because it is the most frequently consulted. And yet, since the prayer involves what happens to you after you die, its interpretation is less a matter of halakhic, social, or even political norms and more a matter of its metaphysical, even existential import—of, as you might say, life and death. On close consideration, this prayer seems to me to contain a profound ambivalence about mortal life itself and about the possibility, or the desirability, of returning to it.

In this connection, Rabbi Jacobson treats at length the question of why one should promise to give charity for the dead. (The person offering the alms is usually a relative of the deceased who has requested that the rabbi or cantor recite the prayer.) The simple answer is that doing so will release their souls from hell, or, as a midrash puts it, allow their souls to be “shot out of hell as quick as an arrow.” But Rabbi Jacobson also raises a less prosaic question: to what does the mysterious term “bond of life” (as in “bind his soul in the bond of life”) refer? His answer derives from Sefer Nishmat Ḥayyim, a treatise on reincarnation by Menasseh ben Israel (1604-1657), the eminent Amsterdam rabbi and kabbalist, which has the added authority of having been published right around the time of the massacres that caused this prayer to enter the liturgy:

Know that the complete good merited by the righteous is cleaving to the Lord blessed be He and for their life to be bound up in an eternal bond in the bond of life with the Lord without returning another time to this foul body. And so Abigail said in her prayer for David, “May my lord’s soul be bound in the bond of life with the Lord your God” (I Samuel 25:29). And as it says in Psalm 73:23: “And I am always with you, grasp My right hand”—so that one does not fall to earth.

In other words, according to Menasseh ben Israel, what the prayer expresses most fervently in its aspirations for the souls of the dearly departed is that they be exempted from returning to this vale of tears. The last words of the quotation should really be italicized: Hold my hand, Lord, don’t let me drop back down again.

To return now to where we began: it was the extreme dissonance between the view of human existence reflected in this prayer and the tone of much contemporary Jewish life in the land of Israel that was forcibly brought home to me as, in early 2014, I watched the telecast of the state funeral conducted for Ariel Sharon on his sheep ranch in the northern Negev. There was something entirely surreal about hearing El maley raḥamim, in all of its Ashkenazi mournfulness, delivered not by a grizzled elder enshrouded in his prayer shawl but by a large, muscular IDF cantor still in uniform and evidently on active duty. It was like seeing a NFL football star in full gear singing “Nearer My God to Thee.” It’s not that you doubt the sincerity; it’s just that the singer’s imposing corporeal presence tends to undercut the doleful words and dirge-like tune.

If the cantor’s physicality and the rural location of the burial service were not enough, what followed accentuated the dissonance even more. For the next recitation, the sons of the great warrior and politician had chosen a song, performed by a rock band, whose sentiments could not have been more different from those of El maley raḥamim:

She will look at me, so good and wise,
Like a son returned from the journey,
Cuddle me to her with her hot, hot breath—
Mother Earth.

She will say, “You’re tired from the march;
Have no fear: I’m binding up your gashes.”
She will take me to her when I call her name—
Mother Earth.

She will look at me, so good and wise,
She’s so quiet, and as ever forgiving;
She will take me to her with her hot, hot breath—
Mother Earth.

Let’s put aside for a moment the song’s unmistakable elements of pagan earth-worship, and also the fact that Sharon was enjoying the privilege accorded to few Israelis of being buried not in a municipal or even national burial ground but on his own land (which happened to be the largest privately held plot in the country). Instead, consider how this song, the work of the well-known Israeli songwriter Yaakov “Yankele” Rotblit, relates to Sharon’s own sense of the earth, and particularly the earth of Israel; the way in which Sharon’s attitude may reflect a prevailing Jewish attitude toward this life and toward the land of Israel; and why his sons might have thought he’d like to hear this song at his funeral.

As Sharon wrote in his autobiography Warrior (1989, with David Chanoff):

In my childhood fantasies I dreamed that even if the enemy came, [our] village would be invulnerable. Later, during the terrible first six months of the War of Independence [1948-49], I thought that even if the worst happened to the army, once the enemy arrived at the gates of our settlement, they would not get through. Years afterward, when I was commanding a division in the 1967 [Six-Day] war, I still had the same basic conviction. When the land belongs to you physically, when you know every hill and wadi and orchard, when your family is there, that is when you have power, not just physical power but spiritual power. Like Antaeus, your strength comes from the land.

Some might see braggadocio in Sharon’s comparing himself with the Greek mythical hero who drew strength from his mother, the earth, every time he was knocked down. Surely you can’t get farther than this from El maley raḥamim and the hope of not falling back to earth. But here’s where things get curious.

Antaeus aside, Sharon did know the land intimately, gully by gully. So intimately, in fact, that as Sharon’s biographer David Landau reveals, even as in the early 1990s he publicly castigated Prime Minister Yitzḥak Rabin for what he considered the folly of the Oslo Accords, he was serving Rabin as a security adviser and meeting with him behind closed doors to go over the maps of the territory that Rabin was contemplating handing over to the PLO. They would scream and shout at each other, and sometimes Rabin would usher Sharon out red with fury, but he’d always take Sharon’s advice as they haggled over every grain of sand, with Sharon pointing out spots of strategic advantage that should be kept and suggesting others to be offered instead.

You might say Sharon loved the land of Israel so much that, like Shakespeare’s Henry V, he would “not part with a village of it.” But here another curious tie to Rotblit emerges. Rotblit’s single most famous composition is his “Song to Peace” (1969), whose status as an anthem of the Israeli left was solidified after Rabin, having been cajoled into singing it publicly at a mass rally in support of the Oslo Accords in November 1995, was gunned down by the assassin Yigal Amir and a blood-spattered sheet bearing the lyrics was retrieved from his jacket pocket.

During Sharon’s own, subsequent tenure as prime minister (2001-2006), one of his most decisive acts—regarded by many as an unforgivable apostasy—was the complete and unilateral Israeli withdrawal from Gaza. Moreover, had he not been felled by a stroke in 2006, it is thought that he might well have undertaken the politically much more intractable challenge of deciding which parts of the West Bank to keep and which to cede.

I make no claim to read minds, but it seems just feasible that the selection of Rotblit’s lyric at Sharon’s funeral was intended not merely to express the entirely earthbound, indeed earth-worshipping, sentiments of many a contemporary secular Israeli but also perhaps to acknowledge the considerable political terrain Sharon’s career had covered, especially in its final years.

That journey had taken him, the son of the only two right-wingers in Kfar Malal, a socialist moshav, to a career as a brilliant military commander and strategist, to a second career in politics and eventually to leadership of Likud, the right-wing party that he had helped to found and that under Menachem Begin had become big enough to wrest power in Israel from the left, and finally to the premiership. After his highly contentious withdrawal from Gaza—a territory that he himself had conquered, personally engineered the settling of, and subsequently been vocally skeptical about ceding in exchange for peace—he left Likud while he and it were still in power and created a new centrist bloc that presumably, had he not succumbed to the stroke, would have provided the springboard for a similar withdrawal from the West Bank.

Politically, then, Sharon strikes me as the very opposite of a land worshipper. He desired the land, and he saw the strategic advantage of holding pieces of it, but he ascribed no theological significance to any part of it. What Sharon meant by his frequent invocation of the term “spiritual power” (koaḥ ruḥani) was not some sort of numinous spirit but rather the force of one’s convictions, the ability to carry on fighting.

He was, then, a complex man with a complex connection to the land. So what does his story have to do with El maley raḥamim? Just this: I think we can safely agree that, like other contemporary Jews whose lives are rooted in Israeli reality, Sharon would not have wanted to remain up in heaven, never to be cast back down to his beloved motherland. And that’s where the real dissonance lies. Those who grieve for their departed in the words of El maley raḥamim are still praying in the cadences of a community powerless to defend itself against marauding Cossacks, let alone other, more formidable foes. By contrast, and whatever might be their political leanings, those burying their dead to the lyrics of Yaakov Rotblit, in the hope that the land of Israel will restore all of their wounds, are ascribing mystical properties to something on which even King David did not necessarily hope to stake his immortal rest.