Did American Racism Inspire the Nazis?

A new book claims as much—and in so doing falls into the intellectual trap known as reductio ad Hitlerum. 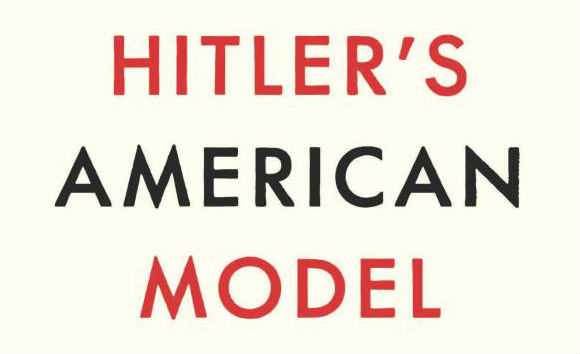 Observation
Joshua Muravchik
About the author

In 1935, two years after Hitler came to power, Nazi Germany promulgated the so-called Nuremberg Laws. One of the two laws stripped Jews of their citizenship, leaving them instead as mere subjects. The other prohibited marriage or extramarital sex between Jews and persons of “German or related blood.”

Some months earlier, the Reich Minister of Justice had convened a meeting of lawyers to begin drafting the two laws. The lawyers left behind a stenographic record that has now been mined by James Q. Whitman, the Ford Foundation professor of comparative and foreign law at Yale University, to “ask what it tells us about Nazi Germany, about the modern history of racism, and especially about America.”

About America? Why America, and why “especially”? Because, as the lawyers convened, they had before them, among things, memoranda detailing American regulations outlawing miscegenation and imposing various forms of racial discrimination. Coming upon this transcript, Whitman proceeded to study it and several other sources to see where they might lead. His conclusion: the American “model” served as an “influence” and an “inspiration” to the Nazis.

This, in a nutshell, is the thesis of Whitman’s short new book: Hitler’s American Model: The United States and the Making of Nazi Race Law. Although, he writes, “no one wants to imagine” that America bears such a discomfiting responsibility—to the contrary, “we may wish to deny it”—there is no getting around it. “When we add it all up . . . American white supremacy . . . provided, to our collective shame, some of the working materials for the Nazism of the 1930s.”

Whitman pursues the quarry of American influence and inspiration in two lengthy chapters, respectively titled “Making Nazi Flags and Nazi Citizens” and “Protecting Nazi Blood and Nazi Honor.” Regarding the deprivation of citizenship that would become enshrined in the first Nuremberg law, the Nazis closely examined the American refusal to give blacks the right to vote in the South, the country’s restrictive and discriminatory immigrations laws, and its denial of citizenship to Filipinos. His finding is this: “throughout [the Nazis’] effort to degrade, demonize, and expel the Jews of Germany, American law remained a regular . . . point of reference.”

As for the proscription of miscegenation, the basis of the second Nuremberg law, the Nazis departed little from their American model except insofar as that they found it too severe. Some Southern states had adopted the so-called “one-drop rule,” which classified as non-white anyone with even a single Negro ancestor. This, says, Whitman, was “disturbing even to Nazi commentators, who shuddered at the ‘human hardness’ it entailed.”

The essence of this malignant confluence of thinking was the “race madness,” as Whitman calls it, that infected both Nazi Germany and the American South in the decade of the 1930s. In that decade, he writes, these two places

had the look, in the words of two Southern historians, of a “mirror image”: these were two unapologetically racist regimes, unmatched in their pitilessness. In the early 1930s the Jews of Germany were hounded, beaten, and sometimes murdered by mobs and by the state alike. In the same years, the blacks of the American South were hounded, beaten, and sometimes murdered as well.

Lest the reader take some comfort in the thought that the American model so admired by the Nazis was, after all, limited to the South, Whitman has even more disturbing news. “The Nazis,” he assures us, “drew on a range of American examples, both federal and state. Their America was not just the South; it was racist America writ much larger.” Nor, for that matter, did the Nazis draw their inspiration only from American figures whom we customarily think of as bigots or reactionaries. To the Nazi lawyer whose work was centrally cited in the committee’s debates, the most admirable exemplars of American racism were Thomas Jefferson and . . . Abraham Lincoln.

So deep were the parallels between the two countries in the 1930s that, Whitman reports, some commentators in Nazi Germany “were particularly hopeful that they could ‘reach out a hand of friendship’ to the United States on the basis of a shared commitment to white supremacy.” In the event, of course, all such fancies came to naught when the U.S., together with the allies that it helped to arm, succeeded in wiping Nazism from the face of the earth. But how does one square this wholly incongruent historical outcome with Whitman’s picture of American/Nazi commonality? That he does not pause to consider this question, let alone to answer it, suggests the rickety quality of his argument.

Suppose for a moment that the Nazis had found no “inspiration” in American examples. What then? The German lawyers had a mandate, flowing from the Führer, to draft laws that would strip Jews of their citizenship and prevent them from further contaminating German blood through sexual contact. Had there been no American “models” to guide them, would the lawyers have reported back to their superiors that, however desirable it might be to protect the Aryan race from the Jews, they could recommend no measures because they could find no foreign precedents? Would there have been no Nuremberg laws? Would the Führer have backed down and away?

To this, Whitman replies demurely: “We will never know.” But that reply is a transparent dodge. Whitman himself, even as he insists repeatedly that the Nazis “found precedents and parallels and inspirations in America,” also concedes that “they nevertheless struck out on their own path.” Indeed, the Nuremberg laws, for all their intrinsic viciousness, were in the end just a step on that path. But about this path itself, Whitman has nothing to say. He has produced a book frozen in time at 1934, a book purportedly about Nazi treatment of the Jews in which the Holocaust is mentioned only in passing.

By means of this time-frozen approach, Whitman begs the obvious question: had there been no American “model,” would one fewer Jew have died at Hitler’s hand? Here, too, he dodges, stating confidently but wrongly: “It is essential to emphasize that extermination of the Jews was not the initial aim of the Nazis”; rather, he asserts, they envisioned only forced emigration.

The only Nazi whose aim mattered in this connection was Adolf Hitler. And, pace Whitman, we do not know exactly when Hitler settled on murdering the Jews. But as early as 1919, he wrote that “[the] final objective must unswervingly be the removal of the Jews altogether.” Removal only from Germany? Perhaps, but Hitler was a global thinker. In the same document, he warned that “the effect of Jewry will be racial tuberculosis of nations.” So perhaps even then he was thinking of the removal of the Jews from the world as a whole.

A few years later, in Mein Kampf, Hitler described a titanic contest for world domination pitting the Aryan race against the Jew. “The struggle against the Jewish world menace will begin” in England, he said, quirkily, adding that in this respect “the National Socialist movement has the mightiest task to fulfill.” That task was to dissuade the German people from nursing a grudge against England or other enemies in the Great War who, despite everything, were fellow Aryans. Instead, they should be seen as allies against the Jews. “[We] must,” he wrote,

open the eyes of the [German] people on the subject of foreign nations and . . . remind them again and again of the true enemy of our present-day world. In place of hatred against Aryans, from whom almost everything may separate us but with whom we are bound by common blood . . . [we] must call eternal wrath upon the head of the foul enemy of mankind [i.e., the Jews] as the real originator of our sufferings.

In brief, it hardly seems that the emigration of Jews from Germany would ever have been sufficient to Hitler’s vision.

Near the end of his book, Whitman implicitly concedes these points and abruptly withdraws what, in effect, has been his main argument, namely, that America “inspired” and “influenced” Nazi practice. “What the history presented in this book demands that we confront,” he now states, “are not questions about the genesis of Nazism, but about the character of America.”

His true subject all along, it thus emerges, has been the sins of America. “In the early 20th century,” he intones, “the United States was not just a country with racism. It was the leading racist jurisdiction—so much so that even Nazi Germany looked to America for inspiration.” And this “forces us to confront an unpleasant historical datum about the place of America in the world history of racism.”

Yet just as Whitman has told us nothing about the “genesis of Nazism,” so he tells us nothing about the “world history of racism.” The discrimination and persecution visited on American blacks was terrible and shameful, but how do we measure it against the European subjugation of much of Africa and Asia, against the mass murder of Armenians by the Turks, against Japan’s rape of Nanjing and murder of millions of Chinese, against fascist Italy’s treatment of the Abyssinians, against the Soviet regime’s ruthless subjugation of small ethnic groups and later its deportation of entire nationalities, against bloody conflicts among tribes, ethnicities, religions in various remote corners of the globe? Much of the abuse of one group by another around the world was and is often carried out without recourse to law; insofar as Nazi lawyers looked to American law, wasn’t it simply because they were, after all, lawyers looking for laws?

Finally, despite his hedged qualifier “early 20th century,” Whitman’s own indictment of American racism is not limited to the past. In the book’s conclusion he adds this:

Contemporary . . . American criminal justice is spectacularly, and frighteningly, harsh by international standards. It includes practices that are sometimes uncomfortably reminiscent of those introduced by the Nazis—for example “three-strikes-and-you’re-out” laws. . . . [W]hat [Nazi lawyers] saw, and admired, in American race law 80 years ago is still with us in the politics of American criminal justice.

One needn’t remind Whitman that the victims of the Holocaust were permitted neither three strikes nor two nor even one to see that his entire book is an elaborate exercise in the intellectual trick known as reductio ad Hitlerum—and a trick that perfectly suits the temper of our times. The farther we get from the era of Jim Crow, the greater our sensitivity to racism seems to grow. Would that one could say the same about our sensitivity to anti-Semitism as the Holocaust recedes in time. Instead, we see that singular horror shamelessly trivialized and exploited in the interests of all manner of ulterior purposes, in this case the pursuit of new and better ways to illustrate the unmatched evil that inheres in the “character of America.”

Did American Racism Inspire the Nazis?