Why the Beginning of the Haggadah Is in Aramaic

It’s because of demons. 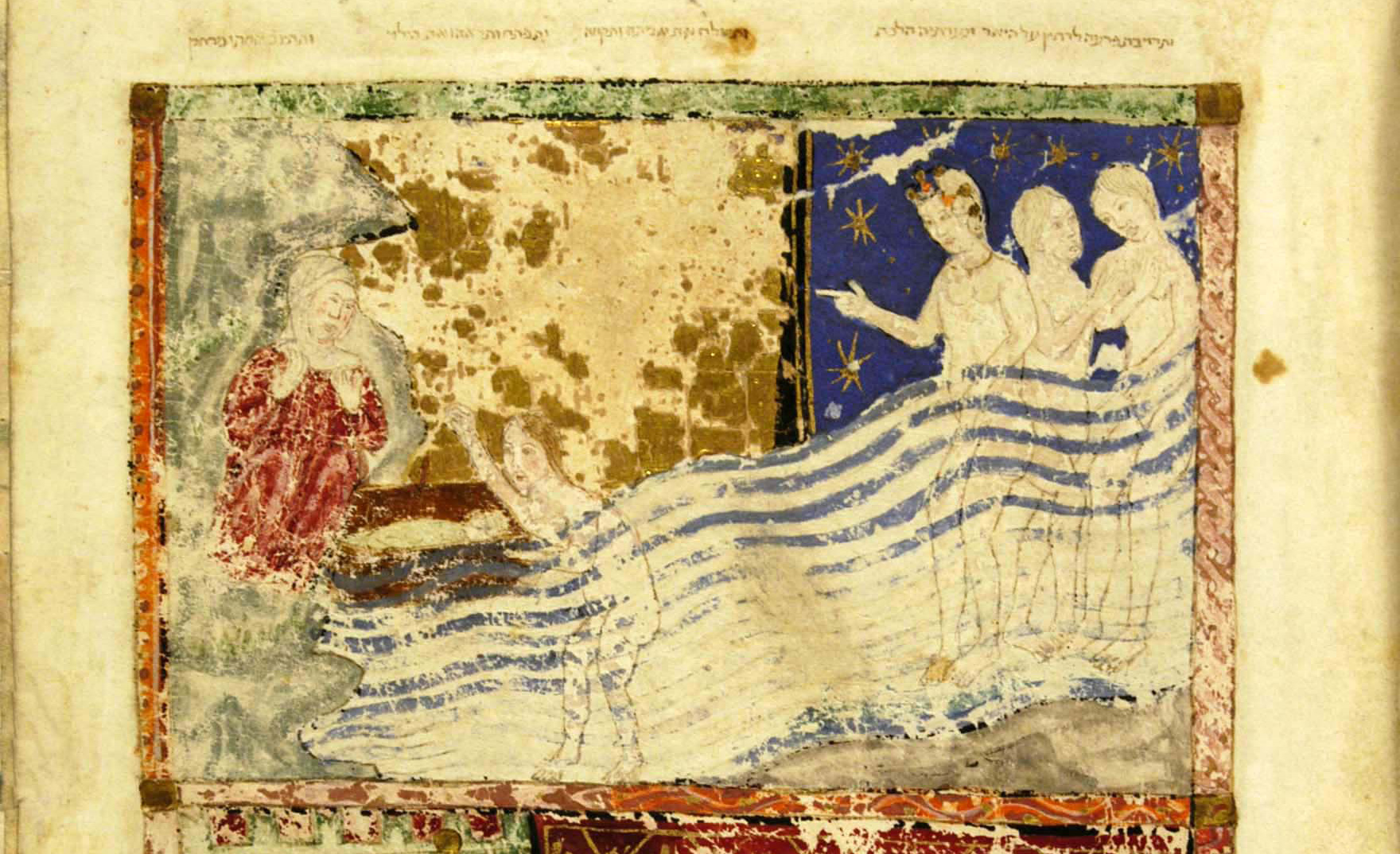 An illustration from the Kaufmann Haggadah, produced in 14th-century Catalonia, showing Pharaoh’s daughter, wearing a crown of flowers, in the Nile with her two maidservants. On the left a third maiden is opening the basket in which the infant Moses is lying, while Miriam, sitting under a rock on the river bank, converses with her. The Collection of David Kaufmann.

Ha laḥma anya di-akhalu avahatana b’ar’a d’mitsrayim, “This is the bread of poverty [or “affliction,” in many English translations] that our forefathers ate in the land of Egypt,” begins the Passover Haggadah. Spoken while the matzah on the seder table is raised for all to see, these words are not in Hebrew, as is the rest of the Haggadah, but in Aramaic—the Semitic language spoken by Jews and non-Jews throughout the Middle East until gradually displaced by Arabic after the 7th-century Muslim conquest of the area. (Tiny pockets of Aramaic-speakers exist to this day in Syria and Iraq, where recent fighting has threatened to annihilate them.)

Ancient Jewish Aramaic and Hebrew are close. To give an example, the opening sentence of the Haggadah’s narrative in Hebrew would be zeh leḥem ha-oni she-akhlu avoteynu b’erets mitsrayim. And herein lies a puzzle. Although Aramaic was used extensively in Jewish religious literature, and much of the Talmud is written in it, the Haggadah, which dates from the talmudic period, is entirely in Hebrew. Apart from the several lines of the ha laḥma anya, Aramaic is found only in the counting songs of Ḥad Gadya and (marginally) Eḥad Mi Yode’a that are sung at the seder’s end. Why did the Haggadah’s editors, who redacted it in the early centuries of the Common Era, choose to begin it with a brief Aramaic introduction that could just as well have been in Hebrew?

In fact, part of this introduction, in which we invite those with nowhere to eat the seder meal to join us, is in Hebrew. Here is a translation of the whole passage, with its Hebrew parts in bold print:

What, then, is the reason for the Aramaic of the ha laḥma anya? The only one given by Jewish tradition that I know of first appears in the 13th-century Maḥzor Vitry, an all-year-’round prayer book with extensive commentary attributed to the French rabbi Simḥah ben Shmuel of Vitry, a student of Rashi. Writing about the Haggadah’s opening lines, he says:

Aramaic was ordained because were one to say in Hebrew “Let whoever is hungry come and eat,” it would be as though also inviting the evil spirits. . . . But the evil spirits do not know Aramaic.

We do not welcome strangers to our seder in Hebrew, in other words, because the world’s demonic legions, who understand Hebrew and Hebrew alone, might then decide to crash the party. What a charming but strange notion! Where does it come from?

One needn’t look very far for the source. In the talmudic tractate of Shabbat we find a passage (there is a parallel one in the tractate of Sotah) that reads:

Rabbah bar bar Ḥanah relates: When we [his students] used to go with Rabbi Elazar to visit the sick, he would sometimes say to them Ha-makom yifkadkha l’shalom [Hebrew for “May God give you health”] and sometimes Raḥmana yidk’rinakh li-shlam [Aramaic with the same meaning]. How could he have done this when Rabbi Yehuda said, “One should never pray for one’s needs in Aramaic”? And according to Rabbi Yoḥanan, “Whoever prays for his needs in Aramaic is not attended to by the angels, since they do not speak it.”

Shabbat proceeds to address Rabbah bar bar Ḥanahי’s perplexity by explaining that God’s sh’khinah or immanence dwells by every sickbed, so that in cases of illness the angels are not needed, as they are at all other times, to transmit our prayers to the divine ear. The notion that the angels are go-betweens in prayer was widespread in post-biblical Judaism, and it is likely that denying them a knowledge of Aramaic at a time when most of the Jewish world spoke it reflected a rabbinic determination to keep the prayer book in Hebrew and prevent Aramaic prayers from entering it. (In the end a few did, but not many.) And although the passage in Shabbat does not mention demons, the logic of denying them, too, a knowledge of Aramaic is clear. After all, if the angels don’t know Aramaic despite its importance for Jewish religious discourse, why should the powers of darkness be better educated?

Yet surely, you say, this doesn’t mean that the Maḥzor Vitry’s commentary on ha laḥma anya is correct. Can’t one find a less fanciful reason for the Haggadah’s beginning in Aramaic?

I can only reply that if there is one that has any cogency, I haven’t come across it—and that the Maḥzor Vitry wasn’t being so fanciful. One mustn’t underestimate the role played by the belief in angels and demons in pre-modern Jewish life, as is attested to by the wealth of magic charms, spells, and amulets invoking them that have come down to us from Jewish communities all over the world. None of these communities was more obsessed with them than were the Jews of the Mediterranean and the Middle East in the early centuries of the Common Era. In her newly published Hebrew book, Lilith’s Hair and Ashmodai’s Horns, the Israeli scholar Naama Vilozny has documented how, in pre-Islamic Babylonia, scarcely a Jewish home was built without a “demon trap” in its foundations: an inverted bowl inscribed with an incantation ensuring that any evil spirit caught beneath it while trying to break and enter would be unable to escape. And it is in pre-Islamic Babylonia that the words of the ha laḥma anya are most likely to have originated.

True, as Vilozny observes. a high percentage of these incantations were in Judeo-Aramaic, and many Jews who credited demons with the ability to cause injury, illness, and misfortune of all kinds obviously thought these demons could speak the language of the country. Yet the Talmud’s authority is not easily gainsaid—and look again at the ha laḥma anya. When does it switch from Aramaic to Hebrew? Only when talking about next year’s seder, which poses no immediate danger. Doesn’t that suggest that the purpose of the Aramaic is indeed to keep the demons away from this year’s seder?

In any case, one doesn’t argue with success. The Aramaic works. When did any of you last see a demon at the seder table?

Why the Beginning of the Haggadah Is in Aramaic