Some Yiddish Words Jump into American English Quickly. Others Take Much Longer.

The process results from, in equal measure, Jewish separateness and Jewish assimilation. 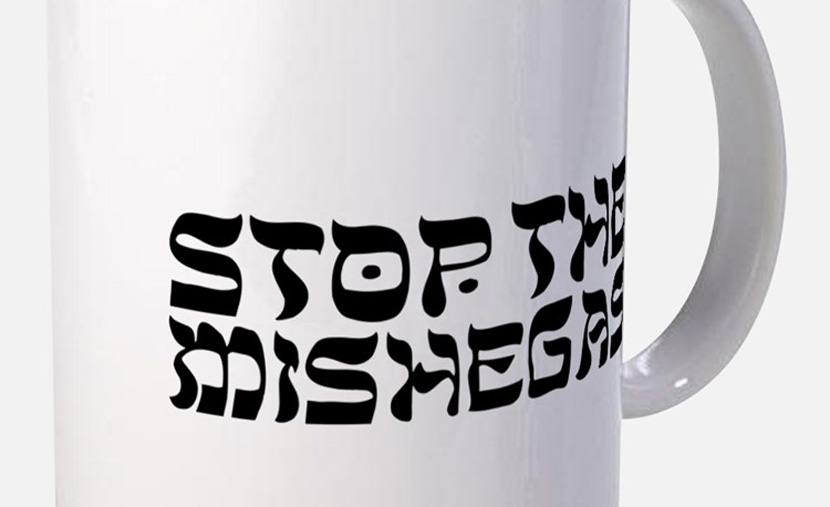 From a mug at Cafepress.

Your recent discussion of how the Yiddish-derived word “noodge” became incorporated in American-Jewish English and went from there to general American English reminds me of another germinating Yiddish word that suddenly appeared on national TV during the Trump-Clinton-Russia imbroglio: mishigas. Is its derivation Hebrew, Slavic, or German?

Actually, mishigas—with the stress on the last syllable and more commonly spelled mishegas—has been around in American English for a while. It’s Yiddish for “craziness” and it consists of meshuga, “crazy,” from Hebrew m’shugá, plus the Hebrew substantivizing suffix “-ut” which became “-us” in the pronunciation of Central and Eastern European Jewry. I myself wrote about mishegas back in 2005, in my pre-Mosaic days in the weekly Forward, when I commented on its use in an opinion piece by the New York Times columnist Maureen Dowd.

Yet it has no doubt been gaining wider currency. In an article in the Forward last November entitled “What’s the Word of 2016? Hint: It’s not Mishegas,” the paper’s writer Aviya Kushner pointed to the latter’s use by the television commentators Chris Matthews and Rachel Maddow as examples of its surge in popularity. Outperforming mishegas and other contenders as the most looked-up word of 20l6, no doubt in response to the mishegas of our times, was, Kushner reported, “fascism.” And since in crazy times words for craziness will be in demand, mishegas’s current popularity may need no further explanation.

Still, it gives one pause for thought. Mishegas, after all, has existed in American-Jewish English for a hundred years or more, ever since a first generation of native-born American Jews took to using Yiddish words learned at home in their speech. Why, then, did a few of these words enter general American speech fairly quickly, many more of them enter it gradually over time, and still more not enter it to this day?

On the whole, it can be said that Yiddish words in American English are the result, in equal measure, of Jewish separateness and Jewish assimilation. The fact that, for a good part of the 20th century, most American Jews socialized entirely or largely with other Jews accounts for the profusion in their speech of Yiddishisms that they assumed would be understood by their conversation partners; the fact that, as the century progressed, more and more American Jews had non-Jewish friends and acquaintances and moved freely in the non-Jewish world accounts for the dissemination of some of these words among non-Jews. The latter type of Jew is the one Maureen Dowd must have picked up mishegas from—and once enough other non-Jews picked it up, too, it, like dozens of other Yinglish words before it, took on a non-Jewish life.

Some of these words no doubt made it into English because, having meanings that no existing English word had, they enriched the language by their presence. Take “kibitzer,” for example, which was already common in American speech in the 1920s. English has no synonym for it, and one can only wonder how centuries of English-speaking card players, chess players, and strategic planners of all kinds got along without it. Were there no kibitzers in those days? Surely, there were some—and surely they were no less annoying before there was a word for them. When American-Jewish English provided one, it was eagerly seized on.

But many Yiddish words borrowed by English had no lack of homegrown alternatives. Think, for instance, of chutzpah or hutzpah, which first caught on in America in the 1960s. English has “nerve,” “gall,” “cheek,” “impudence,” and “insolence,” all of which fit the khutspedik individual well—and yet despite its being difficult to pronounce in English, so that its initial “kh” often changes to an “h,” hutzpah has become one of America’s favorite Yiddishisms.

Mishegas, too, cannot be said to have filled a vacuum. Spelled mishegoss, it is defined by Leo Rosten in his 1968 Yinglish lexicon The Joys of Yiddish as “a wacky, irrational, absurd belief; nonsense; a state of affairs so silly or unreal that it defies explanation; tomfoolery, clowning, ‘horsing around’; a fixation, an idée fixe.”

With such available English words as “wackiness,” “nuttiness,” “zaniness,” and “lunacy,” who really needed mishegas? Yet it has made its way into American English anyway. And on the other hand, a page or two away from it in The Joys of Yiddish is machetunim, which has not. Rosten, defining this word as (a) one’s in-laws; (b) the father- and mother-in-law of one’s son or daughter; and (c) all the members of one’s wife’s or husband’s extended family, writes: “English could have heaved a great sigh of relief if it adopted it.” But even though machetunim, with its singular masculine form of mechuten and singular feminine form of machatayneste, is a more inclusive, congenial, and useful word than our cold, limited English “in-laws,” English has never availed itself of it.

Go figure. The story is told of three men waiting for an elevator, two of them Jewish. The two Jews are conversing in English, into which one of them inserts the Yiddish expression nisht gefeyrlakh—literally, “not dangerous.” The third man, who has been listening, cannot restrain himself. “Excuse me,” he says. “I know I shouldn’t be butting in, but that expression you just used—nisht gefayrlak, nisht gefaylik—what does it mean?”

“It means,” answers one of the two Jews, “that the thing you’re talking about isn’t so terrible. It might be bad, even very bad, but if it’s not the end of the world, you say that it’s nisht gefeyrlakh.”

“Uh-uh,” says the second Jew to the first one. “I see that even you don’t know the meaning of nisht gefeyrlakh. Nisht gefeyrlakh means that if something is bad—if it’s very bad, if it’s so bad that it is the end of the world—well, it’s still nisht gefeyrlakh.”

English could certainly benefit from nisht gefeyrlakh in this age of mishegas, and had the third person by the elevator been Maureen Dowd, it might now be using it. Who’s to say that one day it won’t be?

Some Yiddish Words Jump into American English Quickly. Others Take Much Longer.