In the Year of the Small Count

On the once-prevalent practice of rendering Hebrew publication dates by means of numerically coded verses from the Bible. 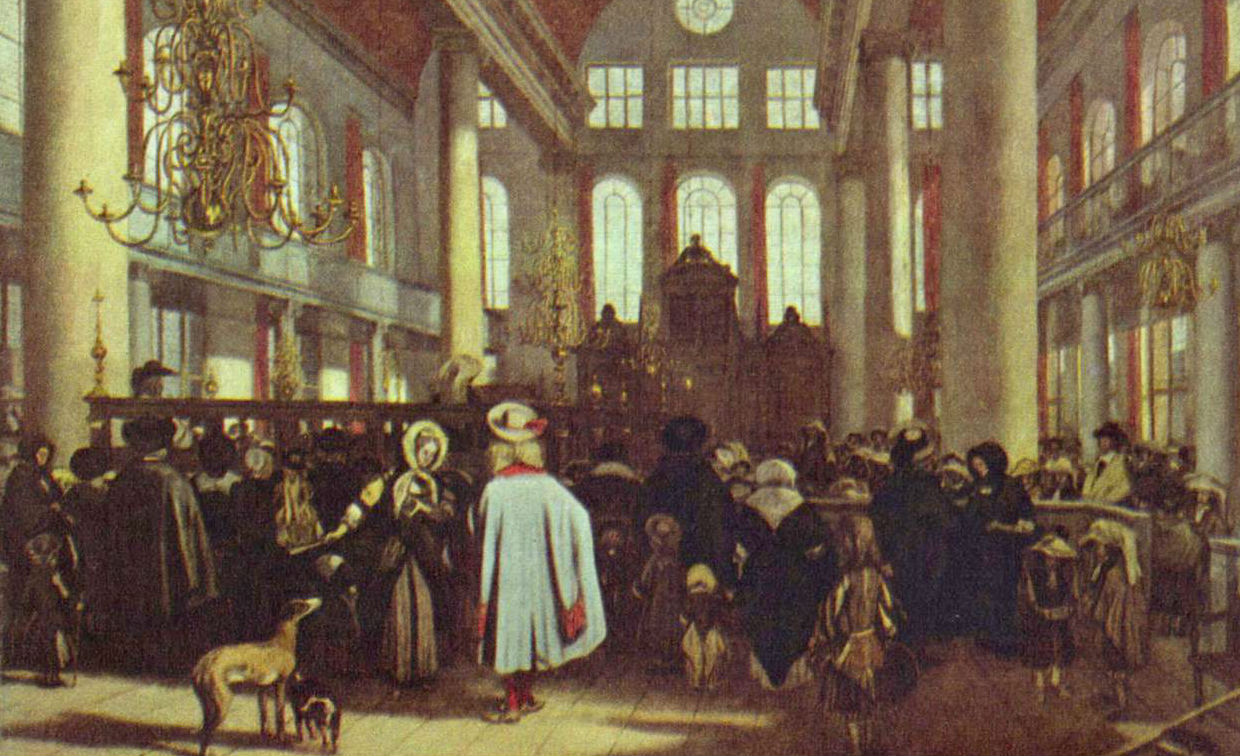 From The Interior of the Portuguese Synagogue in Amsterdam by Emanuel de Witte, 1680. Wikimedia.

I’ve just returned from a brief sightseeing trip to Amsterdam. Over the entrance to its Portuguese Synagogue is the Hebrew inscription: בשנת ואני ברב חסדך אבא ביתך לפק. Can you explain the first word and the last one and make sense of the entire sentence?

I can, though it’s a bit complicated. First, however, for the benefit of those who know little or no Hebrew, let me explain the question. Transliterated into Latin characters, the seven words of the inscription read B’shnat v’ani b’rov ḥasdekha avo beytekha l’pak, and the five middle words, which come from Psalms 5:7, are translated in the King James Bible’s sixteen words (truly, biblical Hebrew is a concise language!) as follows: “But as for me, I will come into Thy house in the multitude of Thy mercy.” This leaves the first and last words that puzzle Judith Ronat. The first, b’shnat, means “In the year of.” The last consists of the Hebrew letters lamed, peh, and kuf, which are an abbreviation, usually pronounced l’pak, of the phrase l’phrat katan, “in the short count.”

“In the year of but as for me I will come into Thy house in the multitude of Thy mercy in the short count”? That doesn’t seem to make it any less confusing.

It does, though, if you know that for hundreds of years, the publication dates of Hebrew books were commonly indicated on their title pages by phrases, generally taken from biblical verses, the numerical value of whose letters equaled the Hebrew year in question. For example, one of the oldest Hebrew volumes in my library is an edition of Likkutei Maharan, the collected sayings of Rabbi Naḥman of Bratslav, published in the Ukrainian town of Ostroh. At the bottom of its title page is written, in two different sizes of print, B’shnat lev tahor b’ra li elohim l’phrat katan, “In the year of Create in me a pure heart, O God in the small count.” In this formulation, “Create in me a pure heart, O God” comes from Psalms 51:12; “in the small count” means that in writing the Hebrew year, the thousands are left out (thus, if the current Hebrew year is 5777, its “small count” is 777); and the little letters of “In the year of” and “in the small count” signify that they are to be excluded from the sum arrived at. And so, adding up just the letters of lev tahor b’ra li elohim, we get:

Since this is a “small count,” we are talking about the Hebrew year 5587, the Christian year 1827, which was the year of the book’s publication.

The biblical versification of dates was a convention on the title pages of Hebrew books from early in the history of Hebrew printing until the mid-19th century, when it began to fall into disuse. Given the arithmetic involved, one can understand why it did—and yet figuring out a date from a biblical verse or phrase was a simple task compared with finding, if you happened to be a book’s author or publisher, a biblical citation that would yield the date you wanted. (If you don’t believe me, pick a date at random, open a Hebrew Bible, and try it.) And so, to make things easier, the convention allowed for the citation’s containing smaller letters whose diminutive size indicated that they were to be excluded from the count.

For instance: an even older book in my library is an edition of the well-known kabbalistic work Ḥemdat Yamim, published in Italy in 1757, the Hebrew year 5517. To arrive at the “short count” of 517, its publisher chose the phrase from the prophet Micah 5:3, עתה יגדל, atah yigdal, “Now he will grow great.” Since, however, the Hebrew letters of this phrase yield 522, the word atah was printed on the title page with a small heh at the end, thus reducing the sum by five to 517. And if, in order to arrive at the right sum, one needed to exclude not just one or two letters but much of the citation, the convention also allowed for retaining the whole phrase in normal-sized letters and marking, by means of dots placed over them, the specific word or words to be included in the sum.

And now for the grand Sephardi synagogue of Amsterdam, which not a few of you may have visited. (Apart from its imposing dimensions, I myself, alas, remember almost nothing of it from a visit made long ago.) Although biblically versified dates were on the whole limited to Hebrew book publishing, they could in theory be used anywhere, and I realized at once in reading Judith Ronat’s inquiry that this was what the Amsterdam synagogue’s builders had done in order to indicate the year of its construction or dedication. The phrase they chose, moreover, which speaks of entering the house of God (in Psalms, the allusion is to the Temple), was a highly appropriate one.

There is just one problem: the numerical value of the letters in this phrase are 798. Since this can’t be the “short count” of 5798, a year that will arrive only in 2038, it would have had to be that of 4798, or 1038—over 600 years before the synagogue was built! Something, quite literally, doesn’t add up.

But suppose, though Judith Ronat’s e-mail makes no mention of dots, that only part of the phrase over the synagogue’s entrance was meant to be included in the count: the challenge would then be to find which part that was. I checked the synagogue’s history. Construction began in 1671, the Hebrew year 5431, and was completed in 1675, the Hebrew year 5435. Next I checked the numerical values of each one of the biblical words over the entrance. These were: v’ani = 67; b’rov= 204; ḥasdekha = 92; avo = 4; beytekha = 432. Four-thirty-two, the “short count” of 5432: bingo!

Or almost bingo, because I was looking for 5431 or 5435. So I checked the building’s history again: 5432 was the year in which its architects had thought construction would be finished. Clearly, without waiting to see whether they were overoptimistic (architects always are), they had had the verse inscribed over the entrance before the rest of the building was standing.

There remained one last thing to do: find a photograph of the entrance with its inscription. The one I found on the Internet appears below. Above beytekha, you can see the dots that Judith Ronat didn’t mention. L’phrat katan is dotted, too—why, I don’t know. Perhaps it was a workman’s mistake. 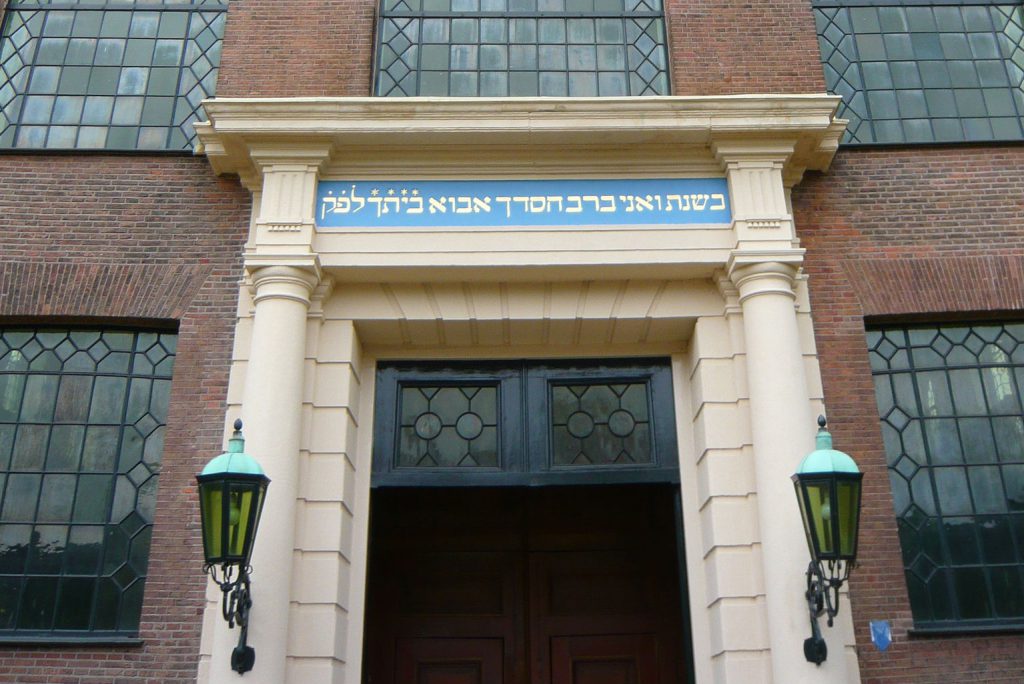 In the Year of the Small Count