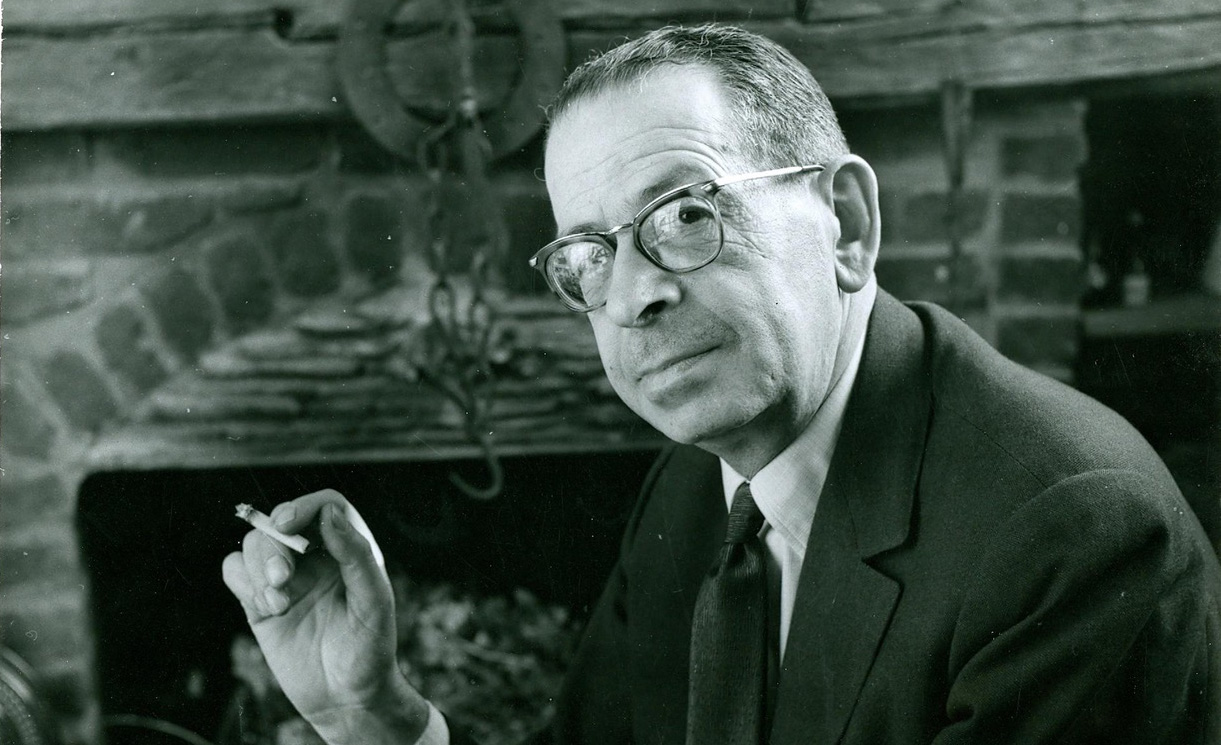 After a 2008 performance in Warsaw of a piano quintet by the Polish composer Szymon Laks (1901-1983), a woman approached the pianist to confide that she hadn’t had the pleasure of listening to Laks’s music for 50 years. On the previous occasion, she explained, she’d been in Paris with her late husband Władysław Szpilman—the composer and pianist who is the subject of Roman Polanski’s Oscar-winning film, The Pianist (2002). The Szpilmans had been friendly with Laks after World War II, but had returned to Poland while Laks remained in Paris, his long-time adoptive home.

If the performance in Warsaw proved a stirring experience for Halina Szpilman, it was no less stirring for the performers, the Toronto-based ARC Ensemble. The score of the Piano Quintet is built on popular Polish melodies, many of them still familiar, and their effect on audiences in Warsaw was electrifying.

At the turn of the 20th century, when Laks was born, Warsaw was still a provincial capital under the Russian tsar, and Poland as a whole was still under the divided yoke of Germany, the Austro-Hungarian empire, and Imperial Russia; it did not gain (temporary) independence until 1918. After studying mathematics at Wilno (now Vilnius) University, young Laks enrolled at the Warsaw Conservatory, graduating in June 1923. A brief stay in Vienna was soon followed by a move to Paris, where his musical personality was shaped by studies with leading composers and conductors, by the city’s abundant cultural offerings, and by his involvement in the establishment of a society of young Polish musicians like himself.

In Paris, Laks became an industrious and versatile musician, playing the violin at cafés and the piano for silent films, teaching, touring as a ship’s musician, and composing. Most of his own music would remain rooted in the pre-World War II language of the “Paris school”: neoclassical and transparent, its form rigorous and disciplined. Even as he grew and matured as a composer, he never abandoned these French roots. One of his initial published works, issued in 1927, was an elegant and very French sonatina for piano, with echoes of Stravinsky and Ravel. Its craftsmanship revealed a composer of uncommon ability, and its energy and rhythmic vitality would become hallmarks of subsequent compositions.

The Nazi occupation beginning in May 1941 cut short Laks’s burgeoning career. Rounded up and taken to the transit camp at Pithiviers, about 50 miles south of Paris, he was eventually deported to Auschwitz-Birkenau on July 17, 1942. Laks would remember little of the journey, which took nearly three days, save for a single incident when the train stopped and he managed to push through the human crush to a small meshed window, the only source of fresh air. Through the opening he made out the name of the station. It was Eisenach, the birthplace of Johann Sebastian Bach: a town he had always wanted to visit.

On arriving in Auschwitz, Laks was tattooed with the number 49543 and sent to work in a labor detail. Prisoners generally survived only a few weeks before succumbing to the combination of punishing work, beatings, minimal nutrition, and the cramped, dehumanizing, unsanitary conditions. The details of how Laks managed to survive are chronicled in a dispassionate memoir he published shortly after the war, later issued in English as Music of Another World. Publication in Poland itself, still infected by its own lingering anti-Semitism, was denied by the country’s minister of culture.

In the book, Laks attributes his survival to “a series of miracles.” The first occurred early on when the barrack’s kapo, a Pole, asked if any of the Polish-speaking inmates could play bridge. Volunteering, Laks made up a fourth for the kapos’ nightly game. When it emerged that he was a musician, his kapo immediately arranged for him to join the camp orchestra. Although Laks avoids identifying him, there can be no doubt that this “benefactor” saved his life.

Although musicians were not exempt from physical work, Laks’s abilities as a copyist and arranger separated him from the others; he was installed in the relatively luxurious musikstube (music room) where his work was rewarded by certain privileges and even occasional amenities. He proceeded to turn out arrangements of favorite songs, potpourris, and musical diversions for which he was paid in cigarettes, the camp currency.

Survival became even likelier when he was appointed conductor, replacing a seriously underqualified German Pole named Franz Kopka. He candidly describes his role in initiating the switch:

I admit it without any scruples—I had intentionally introduced into my orchestrations the greatest number of difficulties in rhythm, counterpoint, and syncopation, for the percussion instruments as well, which made it impossible for Kopka to conduct the rehearsals, let alone public performances!

The ploy was hardly without risks. Retaliating, Kopka would accuse Laks of stealing food and performing “forbidden Polish music.” Fortunately the camp commandant had none of it, tearing off Kopka’s conductor’s lyre and formally awarding the baton to Laks.

Making Laks still more useful was the fact that in addition to his skills as a violinist, composer, arranger, and conductor, he was something of a polyglot, being fluent in Polish and French, comfortable in English, German, and Russian, and passably familiar with other languages as well. He also developed a special facility in the orchestration technique known as “odeon”—which, by adding small “alternative” lines to players’ parts, enables instrumentalists to fill in missing parts as the occasion demands, thereby making it possible, as he writes, “for any group to perform any work, regardless of the presence or absence of one or even a few musicians.” The system was especially appropriate for an orchestra whose players routinely sickened and died, to be replaced by new arrivals.

There has been considerable debate over the role of music in the camps. Beyond its obvious utility to the Nazis, did it in any way ameliorate the suffering of the prisoners, recalling to their tortured spirits the persistence in the world of beauty, nobility, and grace? Could it even have instilled or rekindled the will to live?

Laks himself grants none of this. In his view, music was merely one more part of the madness, irrelevant to the quality or the mental stability of prisoners’ lives and powerless to reach them. He writes dispassionately about the marches played as labor detachments left in the morning and returned at night (always, it seemed, at a slower tempo); about the tunes from popular operettas played as macabre commentary at assemblies; and about the bespoke performances that indulged the cultural pretensions of SS officers. Whatever distraction music may have provided for the orchestra members themselves, he regards as delusory the notion that it served to heal or raise prisoners’ spirits. To the contrary, the privileges enjoyed by orchestra members—increased rations, reduced physical labor—were often bitterly resented and led to inevitable suspicions of collaboration.

Once the orchestra was disbanded, Laks was transported briefly to Sachsenhausen and then to a sub-camp of Dachau. In late April 1945, close to the war’s end, the guards marched the prisoners out of the camp and then deserted, leaving them to their own devices. By mid-May, Laks was back in Paris. Two years later, he became a French citizen.

The trauma of Auschwitz left Laks alienated and reclusive, pursued by memories of his internment, remorseful at having survived when so many had perished, and inevitably speculating as to what he might have done differently so as to evade roundup altogether—in brief, the endless replaying of history and reimagining of circumstances that are the survivor’s legacy. In the immediate postwar years, he left his apartment only when obliged to and avoided social interaction. He did marry, though; his son André, now in his sixties, became a professor of philosophy at the Sorbonne.

Laks’s disquiet, however, is rarely expressed in his music, and only a few of his works refer specifically to the Holocaust. A notable exception is the Lament for Jewish Villages (1963), which mourns the passing of Jewish life in Poland. One also wonders whether the wordless melancholy of his Passacaille, composed in 1945, may be another attempt to express the inexpressible; the only voiced syllable is the singer’s “ah.”

As for the Piano Quintet, it began life as Laks’s third string quartet—the first two are lost—and was premiered in Paris on November 25, 1945, only a few months after his liberation. There is nothing in it—or in the 1967 version for piano quintet—to suggest anything but a cheerful divertissement effectively stitching together various well-known Polish songs and dances. Indeed, its conception, if not its composition, may well have begun while Laks was still a camp prisoner. We know that he arranged Polish material there, specifically the three Polonaises reproduced in the appendix of Music of Another World—and perhaps elements of that composition are included somewhere in the twelve or so melodies that feature in the third quartet.

But in the quartet, as well as in its arrangement for piano quintet, the musical nostalgia is specifically Polish rather than anything connected to Jewish sources. And that is not surprising: like his assimilated contemporaries Alexandre Tansman and Jerzy Fitelberg, Laks was a well-traveled cosmopolitan. Moreover, whatever nostalgia he may have felt for the land of his youth, he certainly had no desire to leave postwar Paris, despite its deprivations and rationing, for the ruins and misery of postwar Poland.

Between 1954 and the early 1960s, ill health and economic straits slowed Laks’ musical output to a few film scores composed under a pseudonym. But in 1962 his concise Fourth Quartet (1962), a rhythmic, jazz-inflected piece, took the grand prize at the prestigious Liège competition. The influential critic and composer Alexis Roland-Manuel, who was on the jury, praised the work for raising its melodies “to the very height of harmonic taste, simultaneously revealing Slavic nature and French culture.” There followed a technically demanding Concertino for wind trio (oboe, clarinet, and bassoon), composed in 1965 and showcasing Laks’s superb contrapuntal skill.

Then in June 1967, in the wake of the Six-Day War and, especially, its terrifying months-long prelude when the very survival of Israel appeared to hang in the balance, Laks abandoned composition. “He told me,” his son André has testified, “that writing music had lost its meaning in his eyes. I was too young at the time, or too far from his past, really to understand.” Further deepening Laks’s depression was the resurgence of anti-Semitism in Poland in 1968, which forced most of the country’s remaining Jews to leave. For the remainder of his life he concentrated on writing, translating, and correspondence. He died in Paris on December 11, 1983.

Laks did little to promote his music, and his backward-looking style and language separated him from the fashionable trends of the mid-20th-century musical scene. At that time, the composers winning critical approbation included—at the “progressive” end—Karlheinz Stockhausen, Elliott Carter, Luciano Berio, and György Ligeti and—at the relatively more traditionalist end—Dmitri Shostakovich and Benjamin Britten. Now, more than a half-century since Laks composed his major works, we are under no constraint to criticize them for failing to conform to contemporary trends; the passage of more time may enable still greater appreciation of them for what they are.

In programs commemorating the Holocaust, composers who perished often receive a kind of compensatory attention while survivors like Laks and a number of others tend to be passed over, as does the work of hundreds of émigrés. But at least in Laks’s case, this is now changing. The publisher Boosey & Hawkes has issued a number of his scores, and the ARC Ensemble has included several first-ever recordings in its recent release, Chamber Works by Szymon Laks (Chandos 10983). In addition to the Piano Quintet, the CD features his Passacaille, Sonatina, Fourth String Quartet, Divertimento, and the wind Concertino. All repay listening.