The promise and peril of calling angels to bless your Sabbath table. 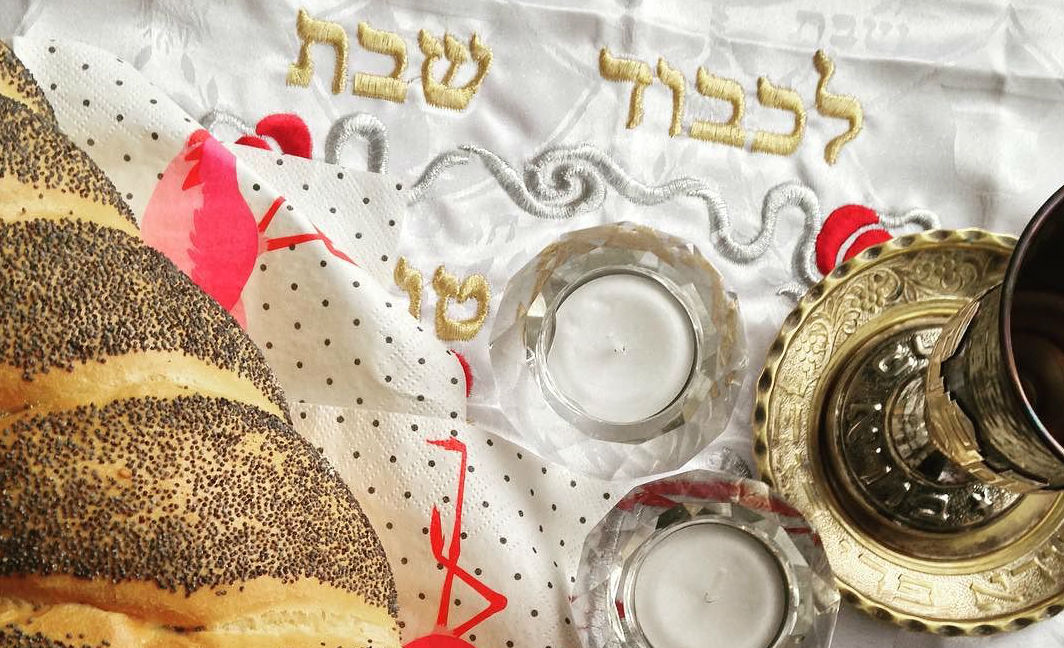 Flip through any siddur and you will find a section dedicated to prayers whose place is not in the synagogue. These include the liturgy not just for weddings, funerals, and other solemn occasions but also for the domestic rituals of the Sabbath, and especially of the Shabbat table, which set the day’s meals apart from those of the rest of the week.

One of these rituals is “Shalom Aleykhem,” sung Friday night on return from the synagogue. It appears in prayer books dating as far back as 1641, and was most likely composed by an anonymous mystic living in Safed. A formal invocation of a familial space of peace and tranquility, the poem is followed by a lyric tribute from the book of Proverbs to the woman of the house, who will be identified with the Sabbath, and then the kiddush, which describes the Sabbath as the very meaning of the creation of the world. But the before-dinner ritual starts with “Shalom Aleykhem,” a song that invokes angels to accompany us with peace:

Peace be upon you ministering angels, angels from above,
From the King, who rules over the mightiest kings—the Holy One blessed be He.

Come you in peace, angels of peace, angels from above,
From the King who rules over the mightiest kings—the Holy One blessed be He.

Bless me with peace, angels of peace, angels from above,
From the King who rules over the mightiest kings—the Holy One blessed be He.

Go you in peace, angels of peace, angels from above,
From the King who rules over the mightiest kings—the Holy One blessed be He.

A very simple song, you would think, and certainly not one that could spark controversy. But not so fast. What sort of peace is it exactly we’re asking for, and of whom are we asking it? One source for the lyric is in the Talmud, Tractate Shabbat 119b:

Notably, the text doesn’t say that a man will receive the blessing if he has prayed with zeal, or has been careful not to violate the Sabbath on his walk home from synagogue, or thinks elevated thoughts; rather, it focuses on symbols of a home and hearth properly arranged. Read in light of this passage, “Shalom Aleykhem” is not simply an invocation of peace in a generic sense, but a plea for domestic harmony. Those grizzled rabbis in the Talmud view the peace of the Sabbath table as the highest point of the week a man can aspire to. Call me romantic but in the line, “and his bed made,” I detect a subtle hint at the conjugal delights that the rabbis, unlike their Karaite competitors, deemed perfectly appropriate for the Sabbath. Here we find the rabbis of the Talmud hoping the angels will come home with them to see if their houses are shipshape and their wives in a good mood.

An Aramaic passage in the Zohar expanding on this theme was translated into Hebrew by the 17th-century sage Isaiah Halevi Horwitz in his Shney Luḥot Habrit, which put many kabbalistic teachings in terms accessible to the layman:

But if heaven forfend it were not so, and there is no harmony between them, heaven forfend, the Divine Presence leaves and the angels with her. And the evil inclination and his forces with him set upon them and say, “This one’s one of mine and he’s of my legion.” Instantly the spirit of impurity rests upon him and awe and knowledge leave the man and the Lord leaves the woman. . . .

Which is to say, this song calling angels to your table is actually a song invoking matrimonial bliss, or, to put it in more prosaic terms, a song hoping that—despite whatever stresses have been setting a couple at each other’s throats during the course of a long, hard week—the peace of the Sabbath will now allow them to rekindle their affection for each other and rediscover a space in which they can see each other in the best light. And the arena where that miracle will happen is the Sabbath table.

Who could object to that?

Rabbi Yaakov Emden (1697-1776), the great rabbinic contrarian of his day, apparently could object. In his collection of responsa titled Sh’elat Ya’avetz, he lists a number of reasons not to say this prayer. First, his father—the widely esteemed and fiercely independent-minded Tsvi Ashkenazi—had said no such prayers upon returning from synagogue on Friday night. Second, the talmudic sages chose to abbreviate the main daily prayers on the Sabbath, removing personal supplications and focusing on praise and thanksgiving; adding such post-talmudic devotions as Shalom Aleykhem thus contravenes the spirit and perhaps also the letter of their wishes. Third, the Jerusalem Talmud states, “Don’t squawk to [the angels] Michael or Gabriel”—meaning that God and not His angels should be the addressee of prayers. By requesting that the angels bless our Sabbath table, we are flirting with polytheism.

So where the Talmud and Zohar see an invocation to domestic harmony, Emden sees incipient idol worship.

Interestingly, Emden did not see fit to omit the song from his own two-volume prayer book, though he found reason there to object over another point: why conclude by bidding the angels farewell in the final stanza? Why not ask them to stay for dinner, since “if all is as it should be, . . . surely [the angels’] joy will increase and they’ll bless him the more for it.” Perhaps, suggests Emden, the author was afraid that if the angels stayed too long they’d notice something amiss, and retract their blessing. Emden therefore states that his own custom is to stop after the first stanza.

The whiff of idol-worship that worried Rabbi Emden also perturbed Rabbi Ḥayyim of Volozhin (1749-1821), whose credentials may be summed up in his being a favorite student of the great talmudist the Gaon of Vilna and the founder of the Volozhin yeshiva, which steeped the soul of the poet Ḥayyim Naḥman Bialik in the halakhah, from which more poetry sprung. Rabbi Ḥayyim, too, was uneasy with even the appearance of praying to angels. After all, he writes, “they have no power to bless whatsoever. . . . If a man so merits, they must bless him; and if not, then, heaven forfend, they must curse him.”

The last word on this subject goes to Ḥayyim Shaye HaKohen Halbersberg (1844-1910), who was very learned but preferred to live by casual work rather than by accepting a rabbinic position; he finally relented in 1902, serving as a rabbi in Lublin for five years before departing to Jerusalem to live out his final days. In addition to eighteen halakhic works and translations into Yiddish, he also compiled the siddur Y’shu’ot Yisrael, adding sections of the psalms, Talmud, and Mishnah to illuminate the prayers. His gloss on the poem’s final stanza (“Go in peace . . .”) is laconic but telling: “When there’s some argument in the home he should not say this rhyme, but soothe the argument. (I received this teaching from a great rabbi, and it is tried and tested.)”

In considering Halbersberg’s comments, and Emden’s, a little more closely, it seems to me there’s more going on here than meets the eye. Emden’s rejection of the poem in his responsum is no doubt motivated by his usual concerns—respect for his father’s opinions and his quest to scale back the influence of Kabbalah—but he nonetheless finds “Shalom Aleykhem” sufficiently innocuous to include it in his siddur. In the final analysis, nobody is very worried that singing this song will really lead to polytheism.

The deeper concern, for both Emden and Halbersberg, is that a man will put his faith in angels and incantations and pay insufficient attention both to Him and to her—the person waiting for him at home. The Sabbath is about rest, and you rest at home. You can pray until you’re blue in the face about Sabbath peace and domestic tranquility, and you can invite all the heavenly host home with you—you can even ask them to stay until the following nightfall—but peace will not come to the house unless the people who live there make sure to maintain it. Even if you truly believe in angels, they can’t help you in that department.

And this, perhaps, is the answer to Emden’s objection both to the prayer in general and to the final verse in particular. You bid the angels “go in peace” because you know they can’t do more than observe. If your house is in order when they arrive, you’ll get their blessing; if not, not. Saying farewell to the angels makes it clear that you’re not asking for their help, but instead saying “I’ll take it from here.” Because if you don’t make peace for yourself, you won’t have peace, period.