Růžičková, who died in September, survived both Hitler and Stalin to become a brilliant interpreter of J.S. Bach—and the only person to commit his entire keyboard oeuvre to disc. 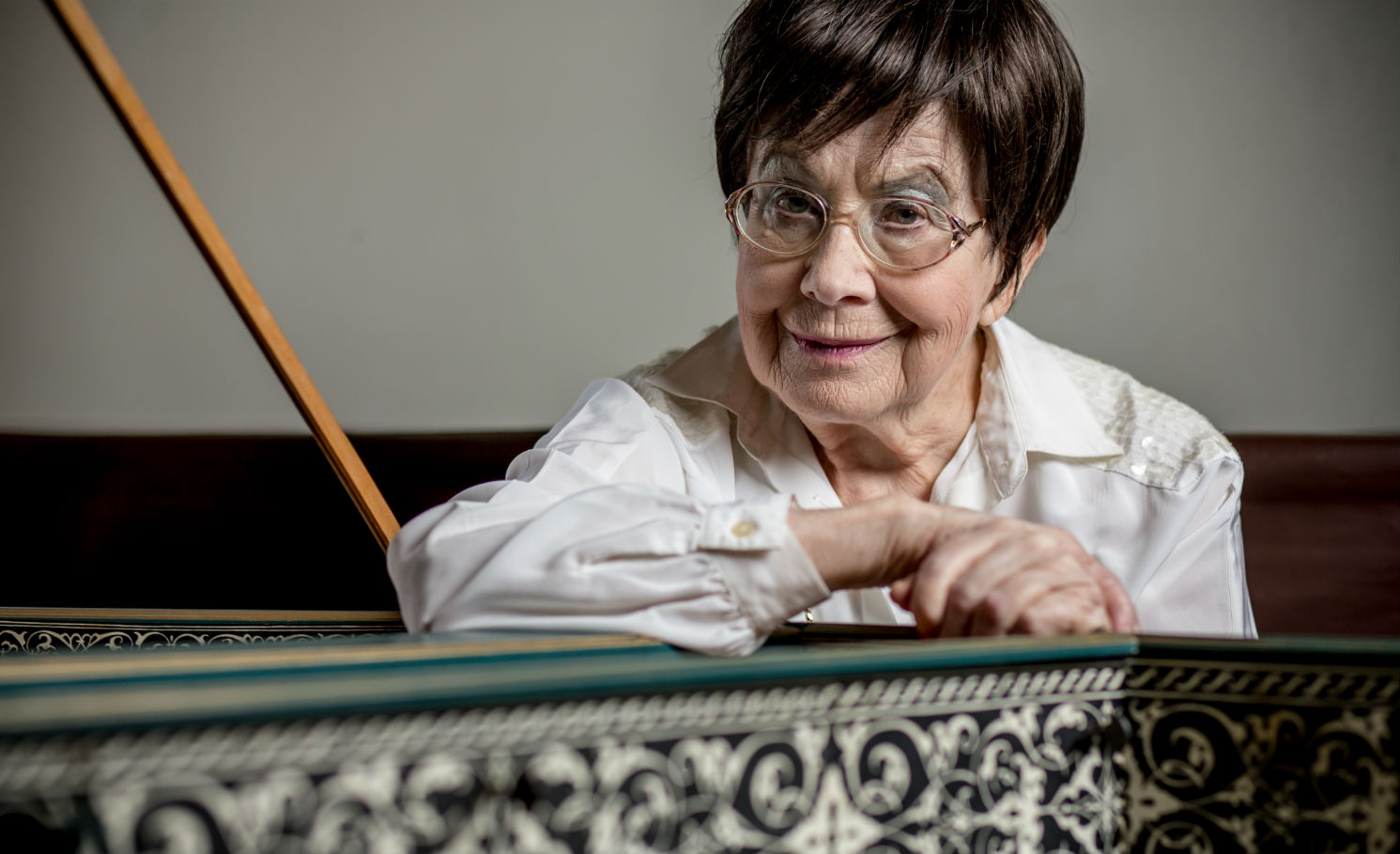 Zuzana Růžičková at her apartment in Prague in October 2016. Matej Divizna/Getty Images.

Observation
Mark Glanville
About the author


Mark Glanville, a bass baritone, has performed with England’s Opera North, Scottish Opera, Lisbon Opera, New Israeli Opera, and on the recital stage, and is the author of The Goldberg Variations, a memoir.

I was loaded on a wagon. My mother was left behind. A gust of wind came and took this piece of paper from my hand. And my mother, who knew how much it meant to me, started to run after this piece of paper and the other girls took her hand and pulled her up into the wagon where I was.

The words are those of the great Czech Jewish harpsichordist Zuzana Růžičková, who died on September 27 at the age of ninety. The episode recounted here is one among many riveting moments in a recently released documentary film, Zuzana: Music is Life. Hers was an adolescence and young adulthood that encompassed the full horror of the Holocaust, followed in turn by the brutal oppression of Soviet Communism, followed in the inspiring fullness of time by personal and musical vindication hard won and thrillingly deserved.

And the “piece of paper” that was so precious to her? It was a fragment of the Sarabande in E Flat Minor from the English Suites of Johann Sebastian Bach. The teenage piano student had kept it close during her internment at Theresienstadt, where her father had died of typhus. The wagon onto which her mother was hauled and thereby reunited with her daughter was carrying its transport in the direction of Auschwitz.

Throughout Růžičková’s life, indeed, Bach was to act as her guiding angel. She even believed he later saved her and her mother’s life by watching over her on June 6, 1944, a day when she had been marked for the gas chamber but that turned out to be D-Day and the Allies’ invasion of France. Instead, as the Nazis moved to concentrate their forces on the home front, she was sent to perform forced labor in Hamburg and then transferred to the death camp of Bergen-Belsen. There she contracted bubonic plague before being liberated by the Allies and restored to a semblance of health.

Returning after the Shoah to Czechoslovakia, her hands badly damaged, Zuzana and her mother, like many other survivors, found themselves shunned. A prospective piano teacher dismissed her for lack of sufficient technical ability, crassly advising that, at eighteen, her repertoire was not as wide as it needed to be. To her mother, the teacher said: “This is a pretty girl. She will marry and play the piano after dinner.”

Evidently, Bach thought otherwise. The biographical thread is taken up by her star student, the Iranian-American harpsichordist Mahan Esfahani, with whom I had two long interviews via Skype after her death:

In 1950 she went from Pilsner [her home town] to the academy in Prague to study the piano. She saw a harpsichord class advertised. It was the first time she saw one. What is going on in the mind of a girl who’s been out of the concentration camps, she’s had all of her family murdered, Czechoslovakia has become Stalinist and pretty anti-Semitic, she comes to Prague, everything is gray and dark. What the hell are you doing picking up a flyer for a harpsichord class? What did it say to her?

Růžičková might have answered that it was saying: “Bach.” The music of the towering Baroque composer, she testifies in Zuzana: Music is Life, “didn’t seem to sound right to me on the piano. When I first played Bach on the harpsichord, it was love at first hearing.” At the Academy of Performing Arts in Prague she became a harpsichord specialist.

While at the academy, she also met her husband-to-be, the composer Viktor Kalabis. They married in 1952. Kalabis, a Gentile, was taking a risk: at the time, marrying a Jew was politically incorrect and dangerous. In fact, having survived the Holocaust, Růžičková now had to face Stalin-inspired anti-Semitism in the world of the arts. Forbidden to perform the premier of Bohuslav Martinu’s harpsichord concerto with Karel Ančerl, the Jewish conductor of the Czech Philharmonic, she was bluntly informed by a party official that “one Jew in the Czech Philharmonic is more than enough.” In time, her growing international reputation led to foreign engagements, making her a useful asset to the regime by providing cover for its anti-Semitic policies while bringing home payments in foreign currency prized by the government.

One foreign invitation in 1956 proved highly problematic; it was to take part in a competition in Munich. This would be the first time Růžičková set foot in Germany since the war. In the documentary, she remembers how afraid she was that while there she might encounter former SS officers. But Kalabis, who had made it his mission to instill in his wife the qualities of “a non-fearing person,” encouraged her to go:

You are bringing Bach back to Germany. I think it is your task to go there as a Jew and as a former prisoner playing Bach to show that Hitler was not the last word.

Persuaded, Růžičková went to the Munich competition, and walked away with first prize.

Nazism and Communism were not the only ideologies whose orthodoxy Růžičková had to surmount. Mutatis mutandis, there would be musical ideologies as well, particularly in the form of doctrines promulgated by acolytes of the early-music movement.

To that movement, which took root in the latter half of the 20th century, we owe an immense debt for recovering, performing, and recording untold numbers of “lost” works from the pre- and early-modern periods. This has resulted, all in all, in a great boon to audiences and lovers of classical music everywhere.

A problem arose, however, in the area of performance. For the most zealous promoters of the movement, among whom the late Dutch harpsichordist Gustav Leonhardt is perhaps the best known, the idea took hold that there was only one correct way to play early music, Bach’s very much included: namely, on reconstructed “period” instruments and in an “authentic”—that is, original—manner, just as its contemporary listeners allegedly experienced it and just as the composer allegedly heard it in his mind’s ear.

Or so the theory went. In the face of resistance and criticism on the part of performers and musicologists alike, the movement’s more doctrinaire proponents retreated somewhat. But damage was undoubtedly done. By stipulating and objectifying “a false moment in the past,” as Esfahani puts it, early-music advocates “eliminated the idea of music as a kind of conversation between the past and the present.” To Růžičková, he continues,

Since her death, some have erroneously referred to Růžičková as one of the last Romantics in her style of playing, but the truth is much more complex. In fact, she associated herself with the Neue Sachlichkeit (New Objectivity) movement—represented in music by, among others, the conductor Otto Klemperer in Weimar Germany—which aimed specifically at paring away the Romantic influence in Baroque performance practice. (For an example of that influence at work, think of Leopold Stokowski’s lushly swooning renditions of Bach with the Philadelphia Orchestra.) By contrast, far from being a “Romantic” bent on using Bach’s music as a vehicle for her own emotions or ideas, Růžičková in her harpsichord playing pursued that same conversation with the past to which Esfahani alludes:

a way of expressing that great chain of being . . . from [the composer’s and performer’s] life experience to disappointments, to triumphs, to identity, whatever that means. A person is so complex. She realized that complexity, and it came out in her harpsichord playing.

No less complex was Růžičková’s relation to her Jewishness. Her father, an atheist, had fallen so out of touch with his Jewish roots that it took the family’s Gentile maid to tell him he needed a hat for synagogue. At school she had no sense of being different from other children. As with others of her generation, it was Nazism that focused her sense of Jewish identity. Esfahani, who once attended the Pinkas Synagogue in Prague with Růžičková on Kol Nidrei, feels it would be incorrect to identify his teacher as even “culturally” Jewish. Still, consulting the Yad Vashem website after her death, he discovered that she had filled out no fewer than 30 forms, one for each relative she had lost to Hitler.

Zuzana Růžičková gave her final performance in 2004, but her musical and intellectual legacy lives on. A wonderful moment in the film, where we see her coaching Esfahani, captures the essence of her musical beliefs. Inevitably, the catalyst is Bach. In one passage of his Chromatic Fantasie and Fugue she hears “a human being despairing of every hope. All those chromatic chords going down and down.” But, as Esfahani continues in the same mode to the next theme, she corrects him. “No! This is hope!”

For her, Bach was not the brilliant musical mathematician he can sometimes be reduced to but a composer better able than anyone to explore the extremes of human emotion. A tireless proselytizer for the master and for the keyboard instrument for which he wrote, she repaid him well, becoming the only person to commit his entire keyboard oeuvre to disc. Her life was one of irony and paradox, vertiginous reversal and uncanny triumph, but in the music of Bach she heard a constant sustaining message: “Don’t despair. There is a sense in life. There is a sense in the world. Only we don’t always see it.”