The Maccabean revolt wasn’t just about independence. It was a culture war between those who embraced “Greek wisdom” and those who believed in transcendent, divine knowledge. 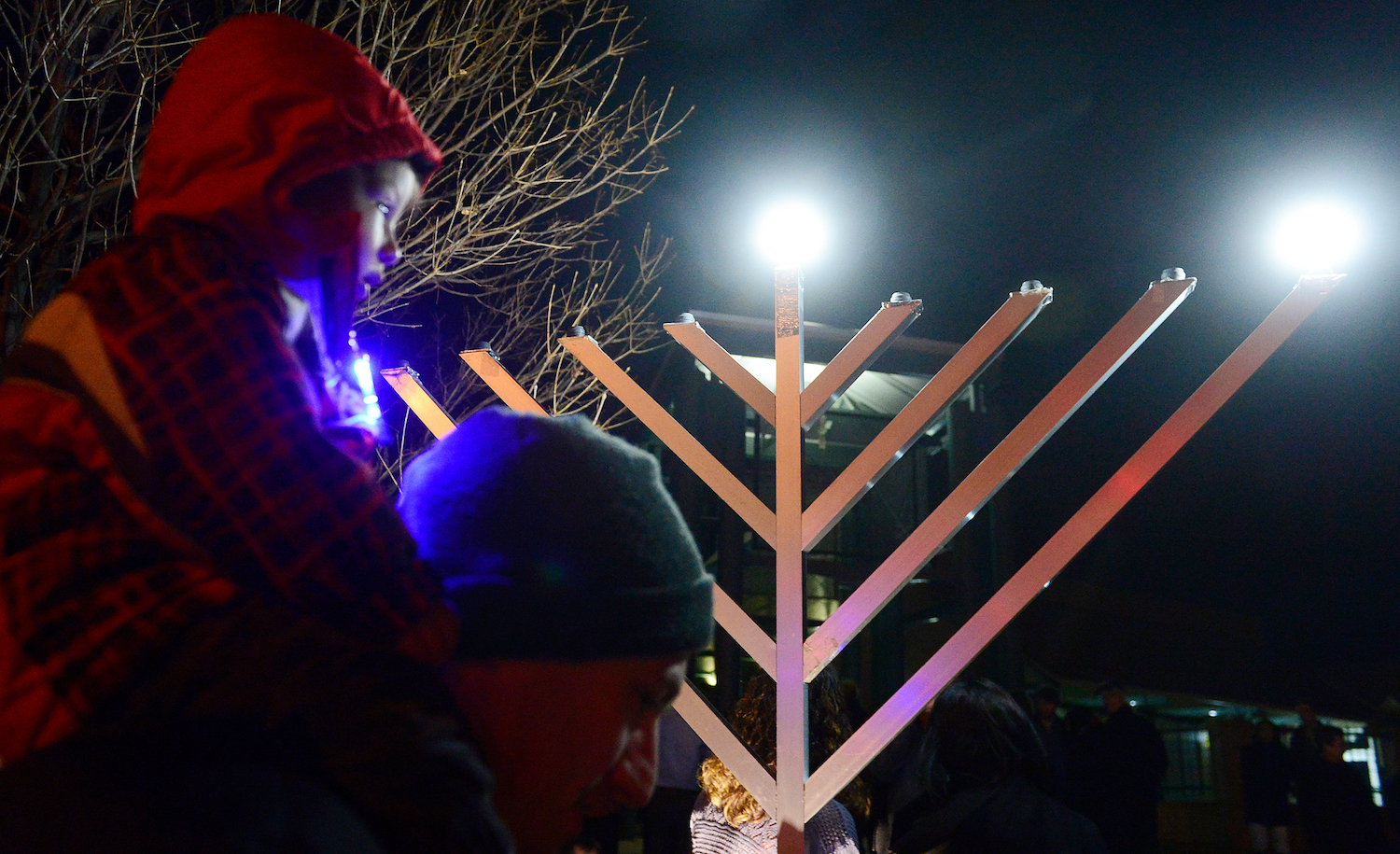 A child on his father’s shoulders on the first night of Hanukkah. Brent Lewis/The Denver Post via Getty Images.


Lewis H. Glinert, professor of Hebrew studies and linguistics at Dartmouth College, is the author of The Story of Hebrew, forthcoming from Princeton University Press.

What have they done to my song? The medieval Ashkenazi maestro who penned the poem we now call Maoz Tsur (in English, “Rock of Ages”) might well have asked this question. True, Mordechai—his name is encoded in the first five stanzas—is a mysterious figure; one can only surmise that he lived in Central Europe near the end of the 12th century. But the lyrics of his celebrated song should leave us in no doubt: were he transported to a modern-day menorah lighting, he would be dumbfounded to hear that we have made Maoz Tsur into a song for Hanukkah—and, to boot, one commonly sung to a German melody more suggestive of Rhenish good cheer than of his simultaneously witty and very serious sweep through Jewish history and destiny.

True, Maoz Tsur is hardly the only work of Jewish poetry or prayer to find itself reinvented—its context, its melody, or even its lyrics subtly or not so subtly changed. The prayer book is full of examples. Think of Aleinu: once a unique centerpiece of the High Holy Days, a solemn proclamation of God’s sovereignty, now serving as a rapidly recited conclusion to daily prayers. Or Adon Olam, originally a sublime medieval meditation upon retiring to sleep, today a jaunty finale to the Shabbat service. Ḥasidic rebbes have gone still farther, lifting Viennese waltzes for the L’khah Dodi hymn welcoming the Sabbath or belting out Napoleon’s March at the end of Yom Kippur.

Still, however you sing Maoz Tsur on Hanukkah this year, pondering the words can inject new and surprising meaning into the holiday, and particularly if you venture beyond the first stanza to explore all six.

Yes, all six. Most Jews today know only the first stanza, and some prayer books include only five, the sixth having long been censored (or self-censored) for its content. To complicate matters more, the popular English version of the first stanza, while fitting the tune perfectly, captures almost none of its meaning, except perhaps for the word “rock.” Here is my far more literal rendition:

Fortress, my rock of deliverance, it is seemly to give You praise.
Set firm my house of prayer and there we will offer thanksgiving.
When You [God] slaughter the baying foe,
I will complete with hymns of praise the inauguration of [ḥanukkat] the altar.

The one clue here that this could be a Hanukkah song is the use of the word meaning inauguration or dedication, from which the holiday’s name derives. And the connection is not merely linguistic: any Jewish schoolchild knows that 2,000-plus years ago, the Maccabee army wrested control of the Jerusalem Temple from Gentile forces and re-dedicated the holy altar. But here’s a question: might this verse possibly refer not to the Maccabee re-dedication but to the initial dedication of the altar in the First or Second Temple or, even likelier, the dedication of the altar in the Temple to be built in some future time after the longed-for arrival of the messiah?

For an answer to that question, it would help first to sketch the contents of the succeeding four stanzas, which retell all of ancient Jewish history in four acts. Here’s an outline:

Stanza 2: Egyptian enslavement and the Exodus
Stanza 3: the Jews in their land, including a recitation of their failings, their exile following the destruction of the First Temple, and their return in the time of Ezra
Stanza 4: the story of Purim in ancient Persia
Stanza 5: the Hanukkah story

Running through it all is a theme, indeed the overarching theme, of Jewish history as portrayed in the Hebrew Bible: crisis and suffering, followed by divine deliverance.

It’s a simple paradigm, but one told by the author of Maoz Tsur in a complex and thought-provoking way, and with a rare mastery of the resources of Hebrew wordplay that no translation can easily capture. Let’s content ourselves with the fourth through sixth stanzas.

The fourth recounts the ancient story told in the book of Esther that is read on the holiday of Purim:

The Agagite, son of Hamdata [i.e., Haman], sought to cut the towering cypress down,
But it was a snare to him, and his supremacy crumbled.
You raised the Benjamite’s [Mordechai’s] head, erased the enemy’s name,
And his many sons and goods You hanged from the tree.

Here the author treats us to a mix of the sublime and the comic. Haman, the careerist social climber, worms his way into the king’s good graces and then seeks to fell the unyielding Mordechai, who is a member of the tribe of Benjamin, likened in the Midrash to a slender cypress tree (b’rosh). But it is Mordechai’s head (rosh)—the head he stubbornly refuses to lower before Haman—that comes out ahead, while the Agagite’s pride traps him in a hole before he, his sons, and his worldly goods are hanged on the tree he’d picked out as a gallows for Mordechai.

The blunt imagery serves to fold this tale of dramatic reversal into four neat lines. In telling it, the poet plays a few verbal and phonetic tricks on villainous Haman, whom he dubs the “son of Hamdata.” To appreciate the jab, one needs to know that strange-sounding Persian monikers ending in –ata are a famous part of the Purim fun: the names of four of Haman’s ten sons, Parshandata, Aspata, Aridata, and Vayzata are declaimed in one breath during the public reading of the book of Esther at precisely the point in the text when they are strung up.

Another and more profound tease is the poet’s introduction of the word nihyatah, a a derivative form of the verb to be, here appearing in the past tense:

But it was (nihyatah) a snare for him, and his supremacy crumbled.

No doubt the poet knew (as do I, thanks to my biblical concordance) that nihyatah appears only nine times in the Tanakh, each time announcing a calamity. But nihyatah also sets up an internal rhyme to the “son of Hamdata” in the previous verse—a rhyme that goes on echoing down the line in ga’avato and nishbatah, and more faintly in the –ta endings that follow: niseta “You raised,” maḥita “You erased,” and triumphantly, talita “You hanged.” To get the full effect, here’s the stanza in transliteration:

All of this goes to show that a little humor has long been the yeast in Jewish thought and life—if only as a divinely sanctioned way of coping with God’s perplexing ways.

The climax of the poem, at least now that it has become a Hanukkah song, occurs in the fifth stanza, which tells the story of the Maccabean revolt:

The Greeks massed against me/ then, in the days of the Hasmoneans,
And breaking through the walls of my towers,/ they defiled all the oils.
But from an extra jug a miracle/ was produced for the roses [i.e., the Jews],
And the sons of understanding established/ eight days of song and rejoicing.

To anyone familiar with the basic outline of the Hanukkah story, these lyrics are unsurprising, but between the lines the author has hidden another story. This one concerns the intellectual struggle between Hellenism and Judaism, a struggle still going strong today. As in all of the stanzas, a single end-rhyme, -nim in this case, joins each of the four verses. But beyond this basic rhyme, we may note a particular phonetic resemblance between the words Ḥashmanim (Hasmoneans) and ha-sh’manim (the oils), echoed a little more faintly in the shoshanim (roses) of the third line. Another variation of the same sound—sh’monah (eight)—appears at the end of the first half of the last line.

Using the same technique he employed in the fourth stanza, the poet then creates a series of secondary rhymes and consonances that echo the primary rhyme. Here, the dominant sound is n. Look at the transliteration:

This may be a stretch on my part, but it’s quite possible that the author has combined his sound-play with a bit of mystical numerology. In indigenous Hebrew numerals, the number 50 is denoted by the letter nun. The Talmud (Nedarim 38a) records that 50 gates of understanding (binah) were created in the world, and all but one were granted to Moses. From this perspective, the revolt of the Maccabees against Greek rule wasn’t just about religious freedom or political independence from pagans. It was a fight between those Jews who accepted the Hellenic claim to intellectual superiority—to a human-oriented knowledge of science, mathematics, and philosophy that surpassed the intellectual achievements of all other cultures—and those who, while placing a high value on human reason and possibly even admiring Greek intellectual achievement, insisted on the existence of a fiftieth level: transcendent, divine knowledge beyond human comprehension.

The culture war that loomed behind the Maccabean revolt came down to a dispute about the existence of this “fiftieth gate of understanding.” Learned medieval readers would have made the connection.

Now let’s turn to the sixth and final stanza. Like the first, it is not historical but meta-historical:

Bare Your holy arm; hasten the day of deliverance;
Wreak vengeance on the foul regime for Your servants’ sakes.
It has been so very long; the cruel times seem endless.
Hurl Red Nemesis [Rome] into hell, and raise up the Seven Shepherds.

Again like the first stanza, this one doesn’t contain a single verb in the past tense. Instead, both stanzas enter a plea for the coming of a future redemption. The word admon, which I’ve translated as Red Nemesis, is a direct reference to Edomites, literally the descendants of Jacob’s brother Esau and figuratively a shorthand both for Rome and for Christian Europe (hence the need for the stanza to be censored). The “seven shepherds” alludes to an end-of-days prophecy in the book of Micah (chapter 5), the shepherds being traditionally identified with the great leaders of ancient Israel (Abraham, Isaac, Jacob, Joseph, Moses, Aaron, and David).

Thus, as much as the author of Maoz Tsur draws on the Jewish past, he first and last has his eyes on the future, on the messianic deliverance of the Jewish nation from its foes. To return to the first stanza:

When You [God] slaughter the baying foe,
I will complete with songs of praise the inauguration of the altar.

In traditional Jewish thought, the future is as much a part of divine history as is the past. It is underwritten by God, leading inexorably, albeit tortuously, toward the final triumph of good over evil when the Jewish people—and people from the ends of the earth—will gather in Jerusalem for the dedication of a global holy altar in the Third Temple. The Hanukkah that the poet Mordechai has in mind is about much more than the triumph of the Maccabees in “our” Hanukkah. While the holiday’s prayers and the lights of the menorah explicitly commemorate miracles past, the Hanukkah narrative depicted in the fifth stanza is just one phase—better, one stage—in Jewish history, and surely not the last.