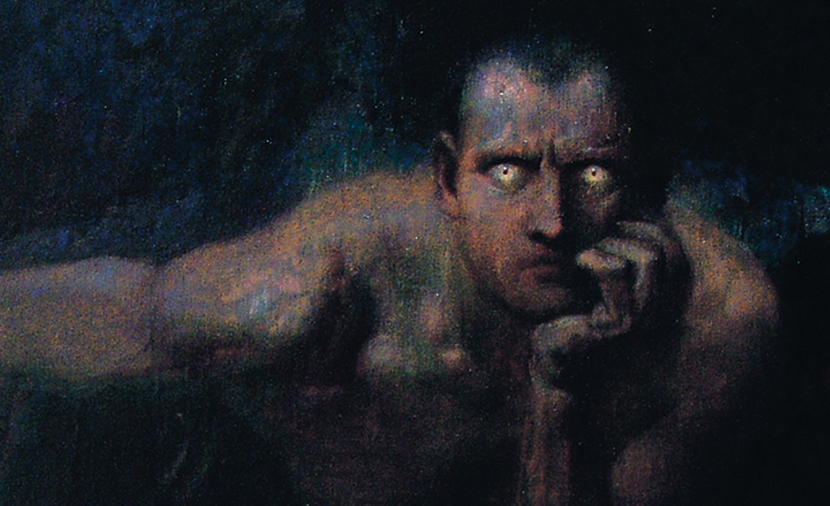 What—or who—in the Bible is b’liya’al? In biblical Hebrew, ben-b’liya’al, a “son of b’liya’al,” is the ultimate pejorative by which someone can be called. In Christian literature, Belial is Satan’s helper or even Satan himself, and in today’s popular culture he is a kind of evil Grand Poobah who turns up in films and computer games. What do you make of it—or of him?

Moreover, the word ben or bat in Hebrew does not necessarily denote a son or daughter. Sometimes it has a purely grammatical function, as in a biblical term like ben mavet, literally “a son of death,” that is, someone deserving the death penalty, or ben meri, “a son of rebellion,” that is, rebellious. Thus, while the word b’liya’al clearly has something to do with evil—a ben bliya’al is an evil man, just as naḥaley b’liya’al are evil or treacherous floodwaters—it is not at all clear whether b’liya’al is an ordinary noun like “death” or “rebellion” or a proper noun, that is, the name of somebody or something.

On this matter, normative Jewish and Christian tradition disagreed. The ancient rabbis considered b’liya’al an ordinary noun. Thus, in its first occurrence in the Bible, in Deuteronomy 13:13-14, where we read, “If you hear that . . . certain men, sons of b’liya’al, have come forth and suborned the inhabitants of their town, saying, ‘Let us go worship foreign gods whom you know not,’” the rabbis understood b’liya’al to mean “wickedness,” and “sons of b’liya’al” to signify wicked men. Various attempts were made by them to explain the word’s derivation. In the Talmud we find the suggestion that it comes from b’li ’ol, “without a yoke,” that is, having cast off the yoke of God’s law, and medieval commentators proposed that its source was b’li ya’al, “without value.” Yet these are fanciful folk etymologies, and modern scholarship has come up with nothing better.

Christian Bible interpretation, by contrast, took b’liya’al to be a proper noun—a name. Jerome’s Latin Vulgate, for instance, translates Deuteronomy 13:13-14 as “si audieris . . . egressi sunt filii Belial de medio tui,” transmitted by the King James Version as “If thou shalt hear [that] . . . certain men, the children of Belial, are gone out from among you.” Here, Belial is conceived of as an evil power, apparently Satan, as he is in the New Testament’s Second Letter to the Corinthians, whose author Paul asks the Christians of Corinth: “What communion hath light with darkness? And what concord hath Christ with Belial?”

This interpretation of b’liya’al, however, did not originate with Christianity. It goes at least as far back as the Jewish sectarians who composed the Dead Sea Scrolls and who thought of Belial as an evil power at war with the forces of good. In the apocalyptic scroll known as The War of the Sons of Light against the Sons of Darkness, which dates to the 2nd or 1st century BCE, Belial is referred to more than a dozen times; one of them is in the book’s opening sentence, where “the sons of darkness” are identified as “the army of Belial.” Although the exact relationship of the Dead Sea sectaries to the first Christians is a matter of debate, there can be no doubt that such an understanding of b’liya’al entered Christianity either from them or from Jewish circles close to them.

It has surprised me that (at least so far as I’ve been able to determine without conducting an exhaustive search) nowhere in the scholarly discussions of b’liya’al does the name of the ancient Canaanite god Ba’al come up. I would have expected it to be mentioned not only because of the resemblance in sound between Ba’al and b’liya’al, or because Ba’al in the Bible is the great enemy of the God of Israel, but also because the Bible has, in all likelihood, at least one derogatory pun on the name Ba’al. And if it does, there’s a good chance, I submit, that b’liya’al is another.

This likely pun involves the Philistine deity referred to in the first chapter of the second book of Kings as ba’al z’vuv, “Ba’al of the Flies,” a name that appears in Christian bibles as Beelzebub. (From it also comes the title of William Golding’s widely-read novel, Lord of the Flies.) 2Kings relates how King Ahaziah of Samaria, badly injured from a fall, sends a mission to the Philistine city of Ekron to sacrifice and pray to its god ba’al z’vuv for his health. His plan, however, is foiled by the prophet Elijah, who asks, “Is there no God in Israel that you must consult with ba’al z’vuv, the god of Ekron?” Elijah calls down fire from heaven, putting Ahaziah’s emissaries to death, and promises Ahaziah that he, too, will soon die—as indeed he does.

And so the God of Israel prevails over Ba’al of the Flies. But what people, one might ask, would worship a god of flies? Flies—pesky, puny, brainless, bothersome creatures—hardly embody what are imagined to be divine qualities. What self-respecting god would want to be associated with them? And why would King Ahaziah have thought he could be cured by such a god?

Some Bible scholars have sought to explain Ahaziah’s turning to a ba’al z’vuv by means of an ancient Canaanite text in which Ba’al expels disease-causing flies from a sick man. They back this up with the fact that the ancient Greeks had such deities as Myiagros, “the Fly-Chaser,” and Zeus Apomyios, “Shoo-Fly Zeus,” whose job was to get rid of the flies that swarmed around animal sacrifices. Well, maybe. But Ahaziah was suffering not from a pestilence but from a fall, and Myiagros and Zeus Apomyios were marginal figures in the Greek pantheon. No Greeks ever worshiped either one as an important deity.

This is why other Bible scholars have put forth an alternative theory; namely, that ba’al z’vuv is the Bible’s mocking pun on the Philistine god’s real name of ba’al z’vul, “the Ba’al of Heaven.” This is more than just a conjecture, because ba’al z’vul is actually how the name appears in a number of ancient texts. The best known of these is the original Greek version of the New Testament gospel of Matthew, in which, in verse 10:25, Jesus tells his disciples, warning them of their persecutors, “If they have called the master of the[ir] house Beelzeboul, how much more shall they call them of his household?”

In deference to the authority of the Hebrew Bible, this alternative theory holds, Beelzeboul was changed to Beelzebub in the Latin Vulgate, and subsequently all translations of the New Testament into the languages of Europe followed suit. Yet ba’al z’vul almost certainly represents an old reading that was still current in Jesus and Matthew’s time and of which ba’al z’vuv was a deliberate distortion.

Moreover, we know of one other case in the Bible where the name Ba’al was tampered with for religious reasons. In Chapter 4 of the second book of Samuel, the story is told of Mephibosheth, the grandson of King Saul and the son of Saul’s son Jonathan. Mephibosheth is a strange name: its first half has no meaning, while its second half, boshet, is Hebrew for “shame.”

Why would Jonathan have put the Hebrew word for shame in his son’s name? The ninth chapter of 1Chronicles provides the answer. There we learn that the real name of Jonathan’s son was not Mephibosheth but Meriv-Ba’al, “Foe of Ba’al.” Though anti-Ba’alistic, this was not good enough for the editors of Samuel, who erased Ba’al’s name entirely by changing Meriv-Ba’al to Mephibosheth.

As I say, it’s speculation. And yet it would explain not only where b’liya’al came from but why, though treated as an ordinary noun by the rabbis, it is a proper noun in the Dead Sea Scrolls, in which Ba’al resurfaces in the post-Canaanite form of Belial as the fearsome enemy of God with whom the Sons of Light have to contend. From there he would have gone on to become the Christian Satan and the evil Grand Poobah of contemporary popular culture.