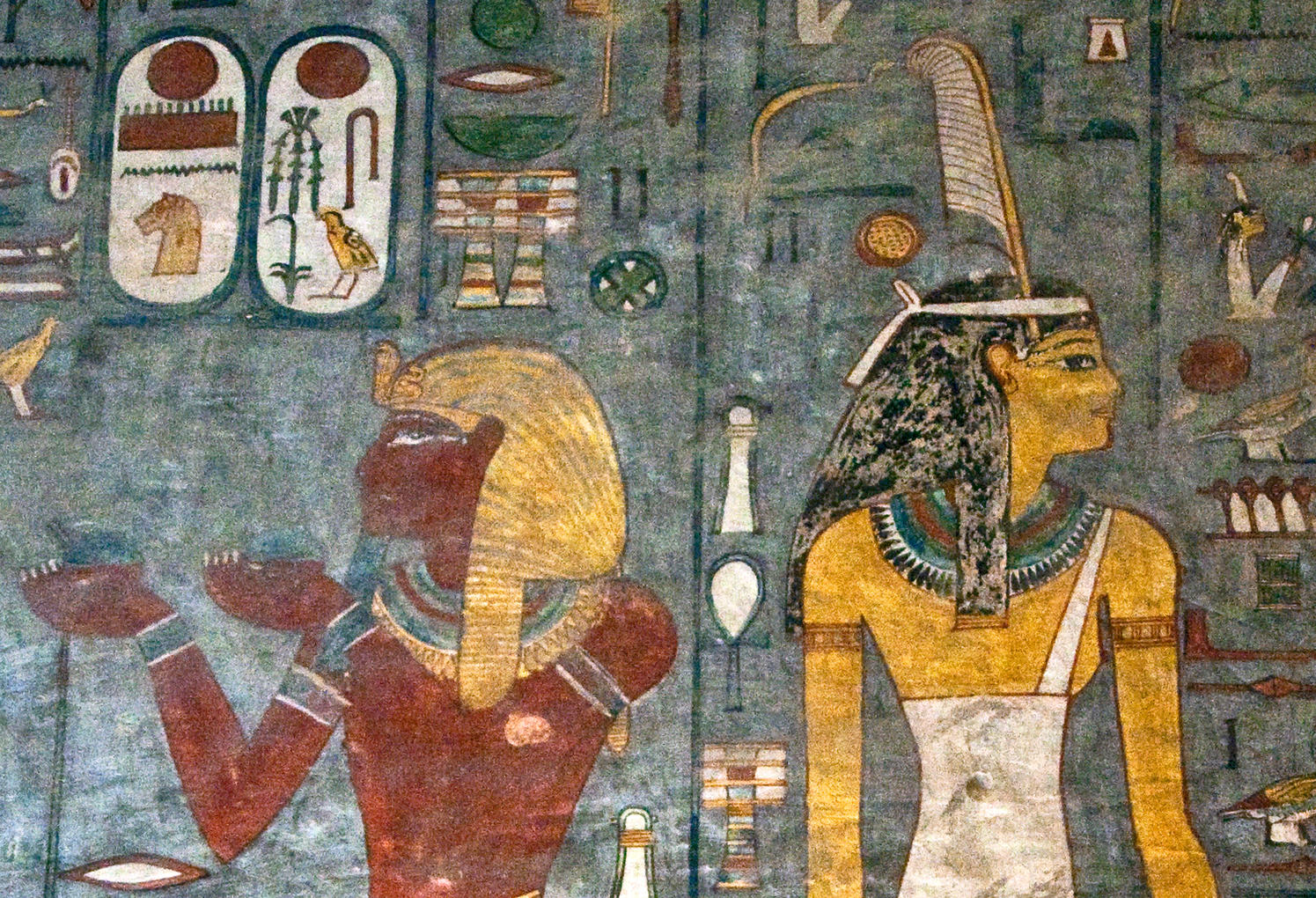 Art on the tomb of Ramses I in Luxor, Egypt. Arco Images GmbH/Alamy Stock Photo.

Dara Horn, whose acclaimed novels some of you must have read, has a suggestion. While reading up in preparation for her family’s Passover seder, she writes, she came across an ancient Egyptian myth of a “heart-weighing ceremony” in which each human heart is weighed against a feather when its possessor dies. Only he whose heart’s evil does not outweigh the feather is admitted to Paradise.

This leads Horn to make her suggestion. “I have often been bothered,” she writes in a letter,

by the recurrent mention in the biblical story of the exodus of va-yikhbad lev Par’o, traditionally translated as “Pharaoh’s heart was hardened.” Literally, the Hebrew says that his heart “grew heavy,” but since in English a heavy heart is associated with grieving, one can see why English translators would have chosen a different term. However, it occurs to me that having a “hardened heart” or being “hard-hearted” is wrong here, and has led English readers to misunderstand a fundamental part of the exodus story.

Pharaoh’s problem is not that he is hard-hearted or stubborn. After all, if he were stubborn he wouldn’t have kept offering to let the Israelites go and then changed his mind again and again. If anything, he comes across as manipulative or indecisive. But now that I have seen ancient Egyptian illustrations of hearts being weighed, it suddenly makes sense to me. Having a “heavy heart” in this context is a figure of speech for being guilty of wrongdoing or malevolence. It has nothing to do with stubbornness. When the Torah wants to say someone is stubborn, it has a different word for it: k’sheh oref or “stiff-necked.”

What do you think? And forgive me for being late to the party if I’m not the first person to figure this out and it’s something that you and many others have already written about hundreds of times.

Actually, this is the first time I’ve encountered such an idea. Although I’m familiar with the Egyptian myth in question (which bears a curious resemblance to the much later Jewish folk-belief in a heavenly trial after death in which one’s good and bad deeds are weighed on a balance scale), I’ve never seen it connected with the phrase va-yikhbad lev Par’o or any of its half-dozen variants in the story of the exodus, such as ki ani hikhbad’ti et lev Par’o, “For I [God] have hardened Pharaoh’s heart.” Horn’s speculation, to the best of my knowledge, is original.

Might it possibly be correct? Is it conceivable that an Egyptian myth might have influenced the Hebrew of the book of Exodus? No one knows exactly when the story of the exodus received its written form; scholarly estimates range from as early as the 9th or 8th centuries BCE to as late as the 5th or 4th. Whenever it was, though, it was certainly hundreds of years after the exodus itself—if, that is, an exodus took place at all. (The scholars who give the Bible’s composition a late date also tend to deny that its story of an Israelite sojourn in Egypt and a flight from there has any historical basis.)

Even assuming there was such an event, moreover, one might ask whether memories of a mythical “heart-weighing ceremony” could have survived long enough among Hebrew speakers in Canaan to account for a Hebrew expression—or, alternately, whether the expression itself could have survived for hundreds of years after its origins in an Egyptian myth had been forgotten.

And yet why not? Centuries-old English expressions whose users have no idea what they originally meant are still in circulation, too. How many of us who speak of someone’s “throwing down the gauntlet” know what a medieval gauntlet was or who threw it down and why? This doesn’t keep us from resorting to such expressions, and it needn’t have kept anyone from doing so in biblical times.

In addition, the time span between a supposed exodus and the composition of an account of it may not have been as great as it was once thought to have been, even by those who date the composition itself to an earlier period. Recently, there has been scholarly interest, as exemplified by Richard Elliott Friedman’s newly published The Exodus, in the theory that the participants in the exodus were from the tribe of Levi alone, which then joined the other Israelite tribes long after the latter had established their confederation in Canaan.

As Friedman observes, the first chapters of the book of Exodus contain Egyptian place names and personal names (the latter, almost all of Levites) indicative of a familiarity with Egyptian life, and they have been attributed by biblical source criticism to the narrative strands of the Bible known as J (for Jehovistic) and P (for Priestly), both supposedly the work of Levite authors. Why couldn’t such authors, relative newcomers to Canaan from Egypt, have been familiar with the Egyptian heart-weighing myth or at least have preserved an expression alluding to it?

I wouldn’t, therefore, dismiss Horn’s suggestion out of hand. Still, this doesn’t necessarily make it convincing—and one reason is that, if one is looking for an alternative reading of the k-v-d root in the exodus story, I can think of a better one that is more consistent with this root’s use in a number of other places in the Bible.

Consider the following three examples (in the English of the King James Version):

In each of these cases, the verb or adjective formed from the k-v-d root refers to the weakness or impairment of a human organ—in one case to poor vision, in another to inarticulate or unpolished speech, in a third to faulty hearing. What has “grown heavy,” as it were, are the eyes, tongue, and ears, which cannot, or can no longer, perform as they were meant to.

Now, the heart is considered by the Bible to be not only a center of the emotions but also the seat of the intellect. The Hebrew word for heart, lev, often functions in much the same way as “brain” or “mind” does in modern English, and its first biblical occurrence is in a verse in the Flood story that says of antediluvian man, “And all the inclination of the thought of his heart [v’khol yetser maḥsh’vot libo] was evil.” Biblical man thinks with his heart—and if eyes that have grown heavy are eyes that no longer see properly, and ears that have grown heavy are ears that no longer hear properly, is not a heart that has grown or been made heavy a heart (or a brain, as we today would conceive of it) that no longer thinks properly? Might not, then, va-yikhbad lev Par’o mean “And Pharaoh’s brain was addled,” just as ki ani hikhbad’ti et libo might mean “For I have addled his brain”? This would be in keeping with Dara Horn’s sense of a Pharaoh too confused to make sensible decisions.

However, my counter-suggestion is open to an objection. If a “heavy heart” is an addled brain, how is one to translate those verses in the exodus narrative that use the k-v-d root reflexively in the hif’il or causative construction, such as va-yakhbed Par’o et libo, which the King James gives as “And Pharaoh hardened his [own] heart”? Here, Horn could render the phrase along the lines of “And Pharaoh weighted his heart with wrongdoing,” whereas “Pharaoh addled his own brain” would not make much sense.

Perhaps this is why none of the great medieval Jewish exegetes, such as Rashi and Abraham ibn Ezra, who knew verses like Genesis 48:10, Exodus 4:10, and Isaiah 58:1 by heart, sought to bring them to bear on the k-v-d root in the exodus story. Rashi, indeed, does not comment at all on the k-v-d root in Exodus, while ibn Ezra parses va-yakhbed et libo as ḥizek et libo, “He [Pharaoh] strengthened his heart,” a verb also found in the exodus story. (“And I will strengthen his heart,” God says about Pharaoh to Moses.) Pharaoh, in other words, had to keep firming up his faltering resolve to retain the Israelites in Egypt, an effort in which God, who wished to bring matters to a dramatic finale, assisted him.

Is “strengthening” one’s resolve so different from “hardening” it? (The King James translators, by the way, were not acting on their own in using the verb “to harden” but were following the Latin Vulgate’s obdurare.) And are these two things so different from being stubborn or obdurate? Can’t one be both indecisive and stubborn?

In the end, both Dara Horn and I may have been trying to improve a translation that really needs no improvement.