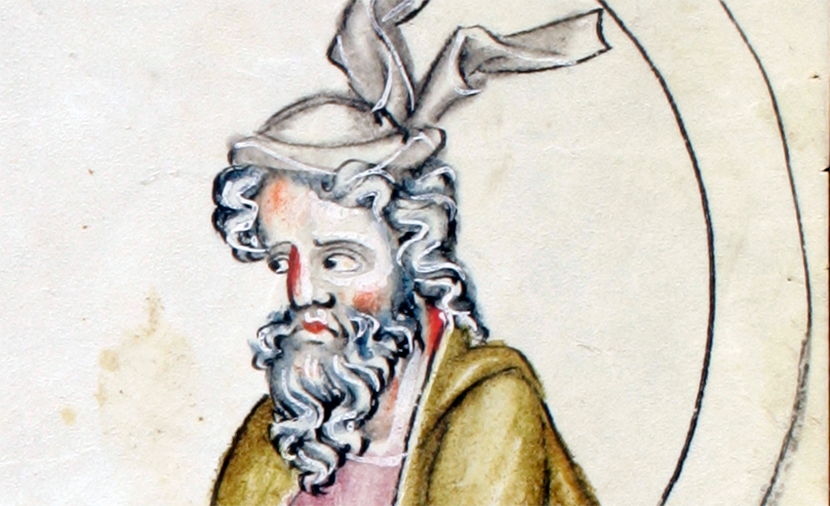 An illustration of the prophet Isaiah from the 14th century. Wikipedia.

The haftarah (prophetic reading) for this Sabbath is the first chapter of the vast book of prophecies attributed to Isaiah son of Amotz, who lived in the 8th century BCE and whose career overlapped with the desuetude and destruction of the Northern Kingdom of Israel by the Assyrian empire, and the deportation of much of its populace. No doubt the chapter is placed first in the book not because it is the earliest of Isaiah’s prophecies but because, in its blend of consolatory sweetness and acrid, stinging light, it is the most representative. Indeed, the Sabbath on which it is read each year—namely, the Sabbath preceding the fast of the Ninth of Av, which commemorates the destruction of both temples—is known (after the book’s opening words) as shabbat ḥazon, the Sabbath of “Isaiah’s vision.”

The modern reader of the prophetic books of the Bible—as opposed to its epic or historical parts—must struggle to define their genre. Are they satires, and frequently very bitter ones? Are they invocations to greater moral probity? Are they consolatory visions of a better future? This is certainly true for readers of Isaiah. Nobody can quite decide how to place it, what exactly its darker prophecies refer to, and to what extent, if any, these prophesies were confirmed. In the view of many traditional Jewish commentators, some were fulfilled immediately, while the fulfillment of others was postponed until the days of the Second Temple and his consolations await fulfillment in the messianic era.

So if we’re not looking to Isaiah for his forecasts, what do we look to him for? Jews look to Isaiah, I would argue, principally for the glorious language in which he portrays both the degradations of his own time and the redemption that will arrive in God’s good time. And that language is on overpowering display not just once a year, in this week’s haftarah, but in more haftarot than have been taken from any other prophet. These include not only the seven haftarot of consolation read in the weeks between Tisha b’Av and Rosh Hashanah but also about ten others read during the rest of the year. Extracts from his prophecies are also prominently placed at key points in the liturgical cycle: on the morning of Yom Kippur, on a New Month if it falls on the Sabbath, in the afternoon prayer of a public fast day (in the custom of many communities), and in the diaspora on the final day of Passover. Nowadays Isaiah is also read on Israel’s Independence Day, at least by those who celebrate it in synagogue.

What is more, haftarot aside, Isaiah is quoted so frequently in the daily prayers as to be considered perhaps the third author of the siddur, lagging behind only Moses (to whom the Pentateuch is ascribed) and David (who wrote the Psalms). Among the multitude of passages in the siddur containing the work of this one prophet is the “Holy, Holy, Holy . . .” that recurs several times in the daily service. Many of the nineteen blessings in the Amidah prayer also close with phrases from Isaiah extolling the Lord as merciful, the redeemer of Israel, the in-gatherer of the exiles, the restorer of righteous judges. Even the daily morning prayer describing God as “forming light and creating darkness” is drawn from Isaiah (45:7), as is the morning blessing “who strengthens the weary” (40:29).

The list goes on and on. Thanks to it, Isaiah’s words and phrases, more thoroughly and more deeply than those even of Moses, have entered and permeated the spoken Hebrew tongue. My mother, for instance, when complaining about something my brother and I had or hadn’t done, always quoted with relish Isaiah’s opening lines about troublesome sons, much as a literate Englishwoman would have turned to King Lear’s “how sharper than a serpent’s tooth it is to have a thankless child.”

Hear heaven and listen earth
For the Lord has spoken:
Sons have I raised and reared
But they have turned against me.
An ox knows its master
And the ass its owner’s trough—
Israel knows none; my people don’t attend.
Oh sinning nation, people heavy with wrongdoing
Children of wickedness, sons who destroy!

Having opened with this crushing condemnation of filial ingratitude and wickedness, Isaiah proceeds to enlarge it:

They’ve left the Lord, provoked Israel’s sacred One,
Fallen back.
Where shall I smack you more
When you add crimes, when every head is sick
And every heart diseased?
From the sole of your foot to your crown
There is no place whole,
Just wound and bruise and bleeding blow
That is not drained or bound or soothed with oil. . . .
Were it not for the Lord of hosts who left us this remnant
We’d be almost like Sodom and look like Gomorrah.
Hear the word of the Lord, rulers of Sodom,
Listen to the instruction of our God, people of Gomorrah.

And then, having graphically described Israel’s fallen moral state and the punishments it has so richly merited, Isaiah really hits his stride, stipulating precisely what is wrong with the people’s religious practice from the viewpoint of where the Lord is standing, or sitting, before finally offering a few helpful guidelines as to how they might yet go about putting it right.

“Why do I want all your host of sacrifices?”
Says the Lord,
“I’m replete with ram offerings and the fat of plump cattle
And blood of bulls and sheep and billy goats I never required.
For when you come to be seen before Me,
Who asked you to trample through My court?
You’ll bring no more empty offerings;
Incense is hateful to Me.
On the new moon and Sabbaths you call gatherings,
I can’t abide the crime coupled with the days of rest.

Much Christian polemic against Judaism has drawn on the condemnatory language here and elsewhere in Isaiah, viewing it as a case against the Temple cult in particular and Judaism’s focus on ritual in general. This view, however, aside from relying on instances of mistranslation, tends to rip Isaiah out of his social and legal context. He is, after all, the same Isaiah who, in Chapter 56, twice praises those “who keep the Sabbath so as not to violate it,” placing this commandment before all others, and then promises as a reward for the Sabbath-keepers that their “burnt offering and feast offerings will be received with favor on [the] altar.” To see him as condemning sacrifice or ritual is to miss his point entirely.

Isaiah’s objection is not to sacrifices per se but to the deluded notion that sacrifices can atone for negligence in other spheres—spheres he is only too happy to enumerate on the Lord’s behalf. The key lines, it seems to me, are what follows:

My soul detests your monthly holidays and sacred days;
They’ve become a trouble I’m too tired to bear.
And when you spread your palms I’ll avert my gaze;
Though you make many prayers,
I cannot hear.
Your hands are filled with the blood you spilled:
Wash and be pure;
Take the wickedness of your misdeeds from before my eyes;
Stop doing wrong.
Learn well, seek what’s just, rehabilitate the thief,
Judge for the orphan, fight the fight of the widow.

It’s all very well, in other words, to bring a nice expensive bull to sacrifice in Jerusalem, but have you been scrupulous in leaving the corners of your field to the widow and orphans at harvest time (Leviticus 23:22)? If you’ve been averting your gaze from trouble in your own village, how can you ask the Lord not to avert His gaze from you?

Let’s go now and discuss, says the Lord,
If your sins will be like scarlet they’ll whiten like snow;
Even if they redden like the worm’s dye, they’ll turn to whitest wool.
If you are willing and listen
You’ll eat the best of the land.
But if you refuse and resist
You’ll be eaten by the sword,
For the Lord’s mouth has spoken.

From this point on, Isaiah’s social criticism turns from a survey of general spiritual malaise and the disastrously misplaced emphasis on selective ritual observance to home in on a more aggressive criticism of the powers that be:

How has she become a whore,
The faithful city filled with just law
Now a lodging for murderers.
Your silver has become tin;
Your wine is spiked with water;
Your ministers are rebels and the friends of thieves.
Every one of them loves bribes and chases kickbacks;
They won’t judge for the orphan, the widow’s fight won’t get to them.

Hence this speech of the master, the Lord of hosts, champion of Israel:

“Woe, I’ll be consoled for My troublers
And avenged against My enemies.
But I’ll put My hand back on you
And smelt your coins like salt,
And extract all your base metal,
To restore your judges as at first
And your counselors as before,
After that you shall be called
A city of justice, a faithful town.”

In his peroration, Isaiah returns once more to the law. And lest we commit the modern error of concluding that “social justice” can be the be-all and end-all of religion, the law for Isaiah remains the law: give your tithe as prescribed by Scripture, don’t try to buy God off with a fat animal, sweat the small stuff of ordained observance, ethical and ritual as one.

Zion will be redeemed by lawfulness
And those who return to her by righteousness.
But disaster upon the criminals and sinners at once
And those who left the Lord shall be consumed.

The premier Hebrew grammarian David Kimḥi of Narbonne (1160-1265), known as Radak, is one of many who tried to parse which parts of Isaiah’s prophecy describe the messianic age and which parts describe immediate or upcoming events. In Radak’s view, the verses just quoted are a reference to the messianic era. When, by contrast, the prophet speaks about the shameful things, as he does below, he is referring to what is going on before his eyes, in his own time:

For they’ll be ashamed of these sacred trees you coveted
And you’ll blanch for those pleasure gardens you chose for yourselves.
For you’ll be like them, with their withered leaf,
And like a shrubbery that has no drop to drink.
Then the mighty oak shall turn to flaxen stalk
And its tiller into just a spark
But they will burn as one
And there’ll be none to put them out.

Isaiah saw a long, long way down this human road, so long a way that we are still awaiting the righteous judges who will administer his prescribed cures. Which is why Jews still pray with his words. Rabbinic legend has it that he himself was turned into a tree, in harsh punishment for telling the truth about the Jewish people and their debased capital city—punished not least for having seen and said how little his own flesh and blood, in the person of King Manasseh—his grandson, according to this legend—cared about the Lord’s words.

But his people still say those words, daily, monthly, and annually, in the synagogue and in the street. They say them because the words are surpassingly beautiful, because of their eternally relevant warning to beware the temptation of straying too far from the law, and because they are true.