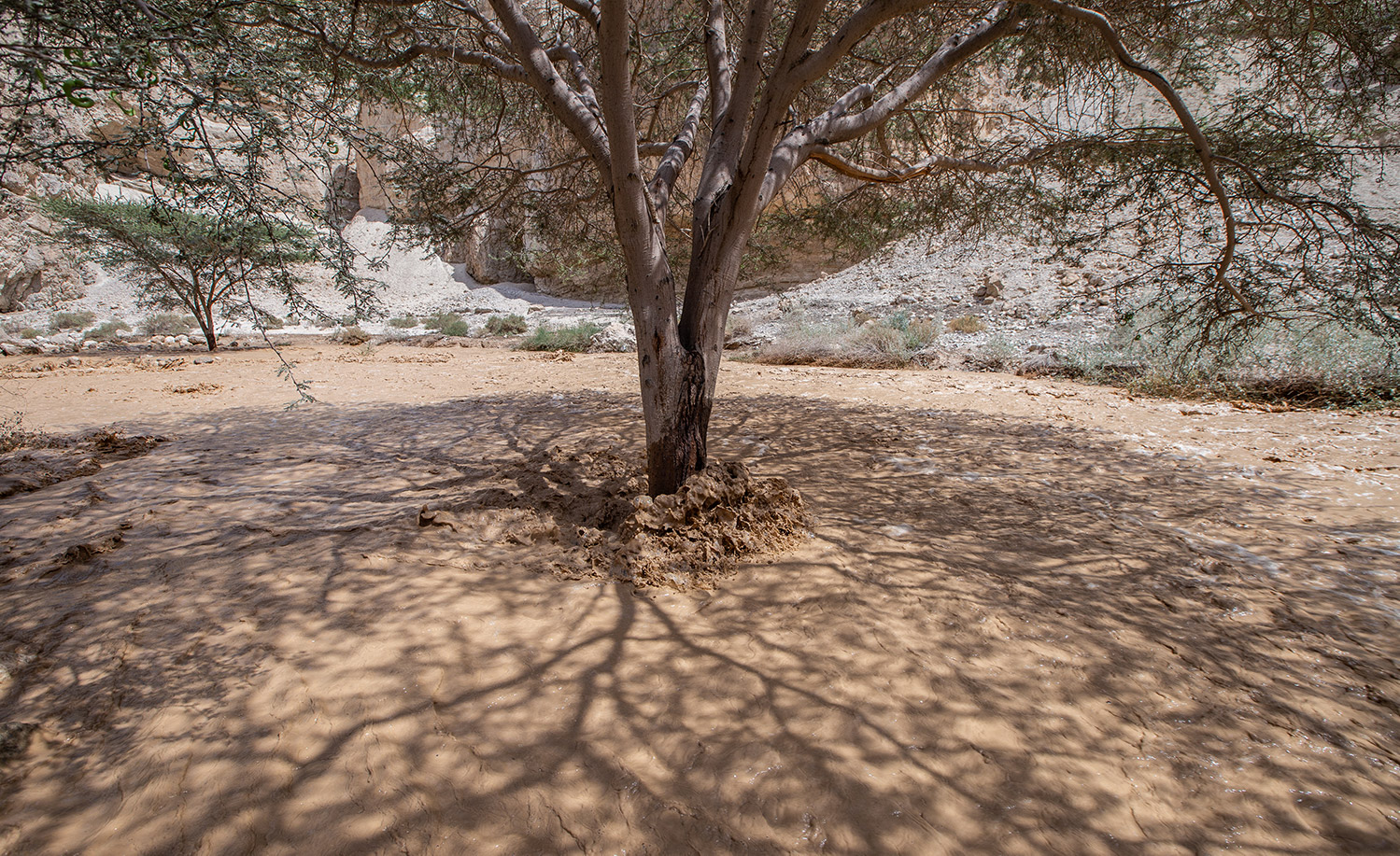 Rain water running through a stream near the Dead Sea in southern Israel on April 26, 2018. Maor Kinsbursky/Flash90.

Judaism takes rain very seriously. One could go so far as to say that rain is the determining factor in Jews’ relationship both with the Land of Israel and with the Lord Himself.

As Moses himself informs the Israelites, unlike the decadent fleshpots of Egypt, its fertile flatlands lushly irrigated by the Nile, the land given by God is hilly and without great rivers to provide it with water. Once there, says Moses, “by the rains of the heavens you’ll drink water” (Deuteronomy 11: 10-13). A land like this provides ample space for growing crops and grazing livestock, and unlike Egypt it doesn’t require the extensive labor of building an irrigation system. But there is a catch. The water doesn’t come free. You have to pray for it.

How do you do that? About this question, it seems to me, there are two conflicting strains in Jewish thought. The formal, annual prayer for rain—which is recited this coming Monday on the festival of Shmini Atseret, inaugurating six months in which the daily prayers remind the Lord to bring rains—reflects the tension between the two. Before turning to this prayer, we should pause to consider the talmudic anecdote that most clearly illustrates the tension.

The anecdote appears in the tractate of Ta’anit, most of which deals with the fasts observed when the autumn and winter rains fail to arrive on time. Its protagonist is Ḥoni the Circle Maker, a wonderworking holy man of the 1st century BCE:

One time [the rabbis] said to Ḥoni the Circle Maker: “Pray so the rains fall.”

He told them: “Go bring your Passover kilns inside so they don’t get messed up [by the rain].” He prayed, but rains didn’t fall.

What did he do? He drew a circle and stood in it, and said before Him: “Master of the universe, Your sons have turned their heads to me, that I am like a member of Your household staff before You.

I swear by Your great name, I shall not move from this spot

Till You have mercy on Your children.”

The dialogue clearly testifies to Ḥoni’s familiar relations with Him, but it’s not as if he’s the first person to address the Lord in this fashion. There is nothing here that Abraham or Moses, both of whom can be stubborn or argumentative when they find divine decrees unjust, do not venture to say to the Almighty, and rabbinic opinion of them is pretty high. But as Ḥoni’s demands become more particular, the dialogue takes a turn:

God listens to Ḥoni promptly, but at first doesn’t give him exactly what he asked for. Ḥoni, for his part, has no problem refusing these gifts until he elicits exactly what’s needed. After all, if you’ve been given a land that’s hilly and dry and requires you to pray for rain, the wrong kind of rain will do you no good.

Reasonable enough, one would think. But Shimon ben Shataḥ, the head of the rabbinic high court at the time, finds something disconcerting about this exchange:

Shimon ben Shataḥ sent word to Ḥoni: “If you weren’t Ḥoni
I’d sentence you to ostracism.
But what can I do to you, when you’re naughty before God
And He does what you want,
Like a son who’s naughty before his father but gets what he wants?” (Mishnah Ta’anit 3:8)

What is Shimon ben Shataḥ’s objection, exactly? Should Ḥoni, tasked with beseeching God over what amounts to a matter of life and death for of all the residents of the Land of Israel, really have been satisfied with a result that would likely lead either to drought or to the crops being drowned by floods?

A perspective on this question, I think, comes from the great annual Jewish prayer for rain. Thought to have been written by the liturgical poet Elazar Hakalir in the 6th or 7th century CE, it consists of six five-line stanzas laden with recondite vocabulary, each line of which ends with the word “water” (a rhyme scheme characteristic of this genre). Through a series of sometimes obscure allusions, the first five stanzas evoke biblical heroes starting with Abraham:

Remember a father drawn after You like water.
You blessed him to be a tree planted on streams of water.
You protected and saved him from fire and water.
You tried him through his offspring over water.
For his sake—do not deny [Your people] water.

Here the poet makes reference to a midrash depicting Abraham’s miraculous salvation from a flaming oven in his native Ur, into which he was thrown for refusing to renounce his faith. But it’s pertinent to remember that this was the same Abraham who questioned God’s promise to make him the ancestor of a great nation when, already an old man with an aging wife, he yet remained childless; and also the Abraham who famously argued with the Lord over His threat to annihilate Sodom and Gomorrah.

In other words, from the start this poem may look like an orderly and dignified rabbinic prayer. But it repeatedly evokes the quibbles, complaints, and outright negotiating with God found in the Bible.

From Abraham the poet moves on to Isaac and, in the third stanza, to Jacob, “who took his staff and crossed Jordan’s water.” Jacob, too, didn’t sit back and expect the Lord to work things out, but took the initiative in tricking his older brother Esau into surrendering his birthright, and then tricked his father Isaac into conferring upon him the blessing intended for Esau. Again, just before crossing the Jordan, and having been granted the vision of the ladder with angels going up and down it, Jacob didn’t suddenly go all pious with thanks but rather proposed a deal: if the Lord protected him on the perilous journey he was undertaking, feeding and clothing him until he saw his father’s house again, then and only then would the Lord be his God. That took even greater gall than asking for a few drops of rain.

The plot thickens further when we arrive at Moses in the poem’s fourth stanza. Like Abraham, Moses was unafraid to argue with God and did so on multiple occasions, usually in order to save the people of Israel from punishment. But there’s something else here, too: “At the time Your chosen ones thirsted for water,/ On the rock he struck and out came water.”

As we all know, there were actually two occasions on which Moses struck a rock to bring forth water. The first time, he was doing exactly what the Lord had instructed him to do. The second time, the Lord instructed him only to speak to the rock but Moses, having become so irritable with the fractious Jews, whacked it instead. And so Moses wound up having to die in the desert without seeing the promised land. Is this really the episode we wish to allude to in asking for rain?

It’s the sixth and final stanza, however, that is the strangest of them all:

Remember the twelve tribes You led by parting water.
For whom You sweetened the bitterness of water.
Their descendants spilled their blood for You like water.
Have mercy, for we are at death’s door by water.
For their just cause—give us a cloud of water.

The first line of this stanza refers to the splitting of the sea; the second, to the episode shortly thereafter in which God miraculously rendered bitter waters drinkable. But the final lines: why, at the end of our annual request for water, do we ask the Lord to be merciful because we are afufey mayim—surrounded or nearly drowned by water? Is the poem suggesting that we’ve been backed into a corner for lack of water? (If so, the word afufey is being used in the opposite of its normal meaning.) Or does it suggest that the very act of praying for water is itself fraught with danger—that this confident back-and-forth with the Almighty can lead to no good?

And could that also be what Shimon ben Shataḥ was implying in his message, or rather his warning, to Ḥoni: not just that one should adopt better manners in addressing the Almighty but that the cost of so unmediated and uncensored a relationship with Him is that either He or His turbulent and hasty people, who are relying on you to intercede with Him, may turn on you when you least expect it?

According to the ancient Jewish historian Josephus, Ḥoni died in the midst of the Hasmonean civil wars that began about a century after the Maccabees expelled the Seleucids from Judea and established an independent kingdom. The brothers Hyrcanus and Aristobulus—both great-great-nephews of Judah the Maccabee—led their respective factions in a bloody struggle for the throne. When, Josephus writes, Hyrcanus’s men asked Ḥoni to curse the rebellious Aristobulus, he prayed: “O God, King of the universe, since these men standing beside me are Your people and those who are besieged are Your priests, I beseech You not to hearken to them.” And they stoned him to death (Antiquities XIV, 22-24).

The results of the war were even more tragic: Hyrcanus eventually triumphed with help from Julius Caesar, and from then on Judean independence would be eclipsed by Roman suzerainty. Thus those twelve tribes, thanks in no small part to Hyrcanus and Aristotobulus, became dispersed after being surrounded not by water but by Romans. And Moses, for his part, died alone in the wilderness.

From this perspective, the prayer for rain could be seen as less a demand in the style of the patriarchs than a polite reminder, or an invoice for services previously rendered by more daring children of God: an ornate and stately invocation of the relationship, dangerous but very intimate, that these particular Jews used to have with the Lord and that, however much we long for it, we would not presume to risk.

As Rabbi Yoḥanan ben Zakkai told his wife when she asked him if another miracle worker, his student Ḥanina ben Dosa, was greater than he—“I am like one of the King’s ministers: I have to wait to see Him until I’m called. He is like a member of the King’s household staff: he comes and goes in His house as he pleases.” Like Ḥoni, and like Abraham, Jacob, and Moses, Ḥanina lives in the Lord’s house. Rabbinic Judaism, Shimon ben Shataḥ, and this prayer suggest that being a minister who waits until the Lord calls him is a much safer way of life.