It could suggest a different story about the creation of the world. 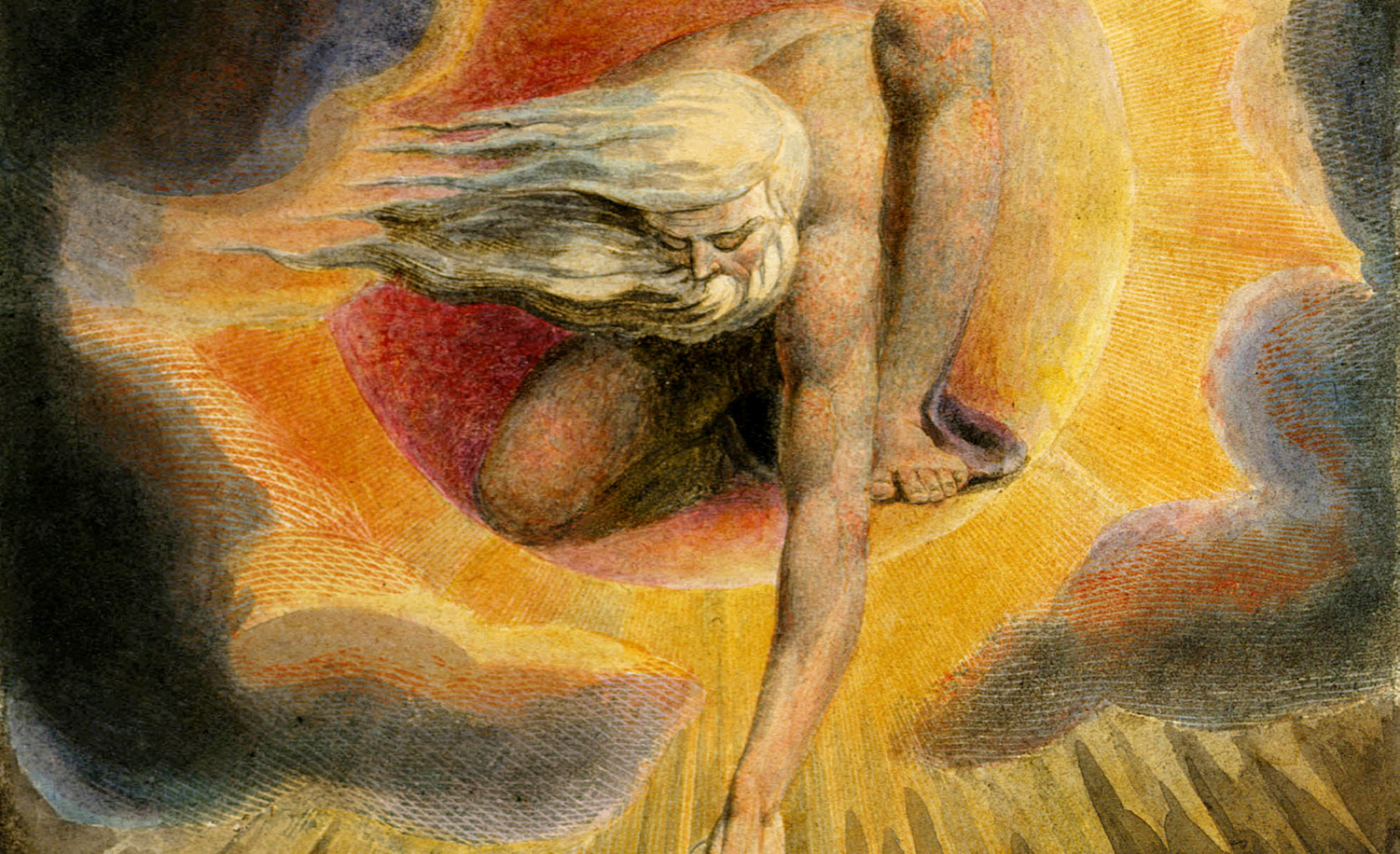 From The Ancient of Days by William Blake, 1794. Wikipedia.

So begins the King James Version of the first verses of the Bible that were read this week in synagogues all over the world. Majestic and mysterious, the words are engraved on Western consciousness. Anyone opening the noted literary critic Robert Alter’s soon-to-be-published The Hebrew Bible, a monumental translation that has taken him decades of work and that spans the whole of Jewish scripture from Genesis to Chronicles, will therefore be startled to read:

When God began to create heaven and earth, and the earth then was welter and waste and darkness over the deep and God’s breath hovering over the waters, God said, “Let there be light.”

Since I intend to write about Alter’s translation at greater length in the months ahead, I won’t comment here on his “welter and waste” for the Hebrew tohu va’vohu, or on his “God’s breath” in place of the generally preferred “spirit of God.” Rather, I wish to address the way he combines the short four initial sentences of the King James Version (in the Hebrew Bible, these are three) into a single longer one by turning the first of them into a dependent clause starting with “When.” Instead of God first creating an earth that was “welter and waste” with a watery “deep” over which His “breath” hovered and next creating light, we are now told that He began His creation with light when the deeps and the chaos already existed. This, it would seem, makes for a different creation story.

Why did Alter resort to this change in the traditional wording? Although his translation is profusely annotated with explanations of why he made the choices he did, none, rather oddly, is offered in this case. It takes some knowledge of medieval rabbinic commentary to understand what lies behind his decision.

Already the first of the great medieval commentators, Rabbi Shlomo Yitsḥaki or Rashi (1040-1105), noticed that there was a grammatical difficulty with the opening verse of Genesis. In the Hebrew, this verse begins b’reyshit bara elohim. While bara elohim, “created God,” with its verb-subject order, is perfectly normal biblical Hebrew, b’reyshit as an adjectival qualifier is not. This is because, while b’ is a proclitic meaning “in” (think, in English, of ’twas for it was), reyshit, “beginning,” is a noun in the construct or genitive case, so that b’reyshit means not simply “in the beginning” but “in the beginning of.” Consequently, there would appear to be a missing word (possibly resulting from a scribal oversight), so that the verse should be understood as saying “In the beginning of ______, God created the heaven and the earth.”

One could conjecture what this missing word might be, but for Rashi, who believed that the Torah was given by God to Moses and transmitted to subsequent generations with perfect fidelity, it was unthinkable that there might be mistakes or lacunae in its text. And so, he observes, b’reyshit bara elohim should be understood to mean b’reyshit b’ro elohim, “in the beginning of God’s creating,” a phrase in which the gerund form b’ro functions as a verbal noun like “creating.”

Yet since even the text’s vowel points, which do not appear in the Torah scroll read from in the synagogue, were considered sacrosanct, Rashi does not suggest that bara should actually be vocalized (as it could be) as b’ro. Rather, searching the Bible for other places in which a construct-case noun like reyshit is followed by a past tense verb like bara that could be construed as a gerund, he claims to find one in the book of Hosea and argues that the first verse of Genesis presents a similar instance.

Other noted medieval commentators, like Abraham ibn Ezra (1089-1167), agreed with this analysis. Rashi and ibn Ezra disagreed, however, about its significance.

Rashi, the more conservative and intellectually conventional of the two figures, didn’t think that accepted Jewish notions of how the universe came into being were challenged by it. In the account of the first day of creation, he writes, “The Bible is not telling us what came first and what came later.” Although it may seem from the language of Genesis that earth and water were already present in some form before God created anything, this is only because we are inappropriately trying to read the passage in terms of chronological sequence. Such an assumption would be false because it contradicts the rest of the creation narrative, in which the heavens are said to have been created on the second day, the earth on the third, and so forth.

Ibn Ezra, an older contemporary of Maimonides, believed otherwise. He had a more philosophical mind than did Rashi and was born 50 years later, when the Aristotelian thought not yet prevalent in Rashi’s age had come to dominate European intellectual life, and he read the Aristotelian doctrine of the eternity of matter into the biblical narrative. According to such a reading, “hylic” or primal matter was present from the start as a timeless correlate of God’s existence.

In a verse in the book of Joshua, ibn Ezra observes, the verb bara also has the form of beyra, meaning to cut down or clear a forest. In the sense of shaping or circumscribing, this, he proposes, is its meaning in Genesis as well. When God “created heaven and earth,” what He actually did, ibn Ezra hints, was to take the pre-existent hylic matter—the welter and waste and watery deep of Alter’s translation—and give it form, thus producing a universe that was the union of matter and form that Aristotle said all things consisted of.

Alter accepts Rashi and ibn Ezra’s grammatical parsing of Genesis 1:1-3 without leaning toward either commentator’s interpretation. (Ibn Ezra, indeed, well aware that his suggestion smacked of heresy from a traditional Jewish point of view, framed it cryptically and ended his discussion of it with the words: “And the man of intellect will understand.”) But although this makes Alter’s translation of these verses practically unique among the dozens of English-language Bibles that have appeared in print, it is not totally so.

At least three other translations take the same approach. One, the Common English Bible (CEB), begins “When God began to create the heavens and the earth.” The CEB was produced in 2008-11, over a decade after Alter’s translation of Genesis was published as an individual volume in 1996, and in all likelihood was influenced by it.

On the other hand, Alter was preceded by well over a century by Robert Young’s 1862 Young’s Literal Translation, which renders these same verses as:

In the beginning of God’s preparing the heavens and the earth—the earth hath existed waste and void, and darkness on the face of the deep, and the Spirit of God fluttering on the face of the waters, and God saith, “Let light be.”

The Scottish Young, a self-taught but immensely erudite Bible and Semitics scholar with an eccentric understanding of biblical tenses, may well have been familiar with Jewish commentaries like Rashi’s and ibn Ezra’s. His translation of bara as “preparing” rather than “creating” suggests that he knew of ibn Ezra’s understanding of the verb as meaning “form-giving.”

The medieval Hebrew exegetes were certainly also known to the University of Pennsylvania archaeologist, Assyriologist, and Bible scholar Ephraim Avigdor Speiser when he translated Genesis in 1964 for The Anchor Bible. His translation begins:

When God set about to create heaven and earth—the world being then a formless waste with darkness over the seas and only an awesome wind sweeping over the water—God said, “Let there be light.”

In his own commentary on these verses, Speiser pointed out that the biblical account of creation was influenced by the ancient Babylonian creation myth Enuma eliš, which long before Aristotle held that “divine spirit and cosmic matter are coexistent and co-eternal.” He left room, however, for the possibility that, although “the biblical writers repeated the Babylonian formulation,” this may have been “without full awareness of [its] theological and philosophical implications.”

When it comes to translating the Bible, it’s hard, if not impossible, to be original. That Alter manages to be partially so, as he does in Genesis 1:1-3, without ever exceeding the bounds of good sense and good taste, is a tribute to his efforts. There will be, as I have said, more about them in future columns.