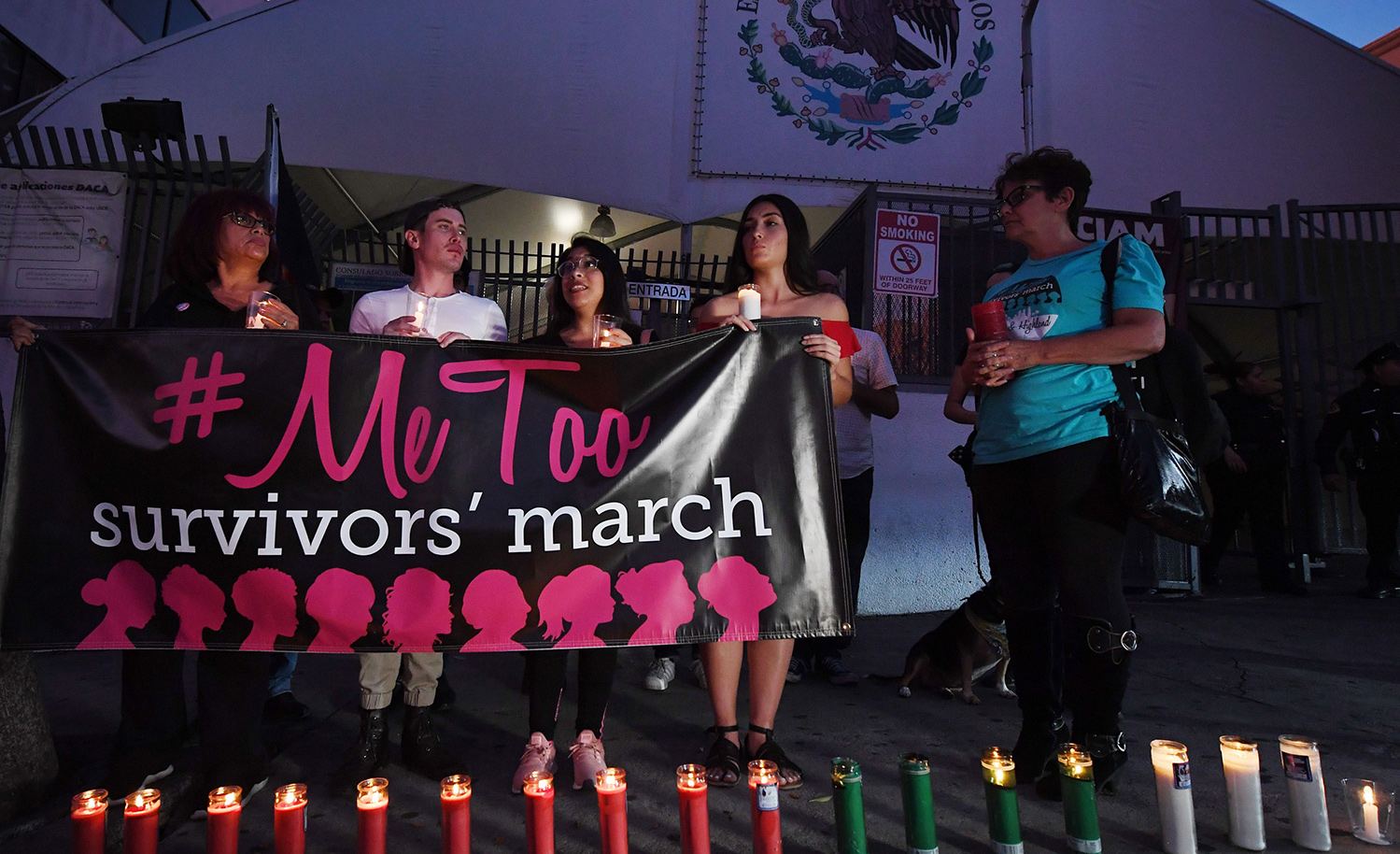 A group describing themselves as #MeToo/#YoTambien survivors in Los Angeles on November 1, 2018. MARK RALSTON/AFP/Getty Images.

Where did we get so many survivors from? The very word in its current sense did not exist much, if at all, before the start of this century. My 1983 edition of the Random House Dictionary of the English Language defines it as meaning simply “one who or which survives,” and though a definition offered of “to survive” is “to endure or live through an affliction, adversity, misery, etc.,” as in the illustrative sentence “She’s survived two divorces and the loss of her fortune,” this simply confirms my point. One did not speak in 1983 of a “divorce survivor,” as one might do today with every expectation of being understood.

What is the difference between surviving a divorce and being a “divorce survivor”? It’s like the difference between applying for a job and being a “job applicant.” If you apply for a job, there’s you, the job, your family (if you have one), your potential employer, and that’s it; no wider context is implied. If you’re a job applicant, you’re part of a group composed of everyone else applying for a job at that moment. You’re in a category, in the same way that, if you’re a “divorce survivor,” you belong to the set of all the people who have ever been divorced.

When did we begin to talk about victims of misfortune or disaster in this way? My guess is that it started after World War II with the term “Holocaust survivor.” This wasn’t an expression, to the best of my knowledge, that came into use immediately at the war’s end. There were years in which one said of a Jew who managed to live through World War II in Europe that he or she “was in a concentration camp,” or “was hidden by a Polish family,” or “fought with partisans in the forest.” One spoke of such people in terms of their individual fates, and of the postwar collectivity to which they now belonged as “DP’s,” the initials for “displaced persons.”  It was only later that they began to be called “Holocaust survivors.”

This happened, I think, for a number of reasons, one being that as the war years receded, and more and more began to be publicly known about the Nazi extermination of the Jews and those who survived it, it began to be possible, let alone tempting, to make generalizations about them that had not been made before. An entire literature, composed of their narratives, the observations of social workers and psychologists, the investigations of historians, etc., came into being, and with it a body of accepted truths. A “Holocaust survivor” was no longer just somebody who had lived through the Holocaust. It was now somebody defined by the experience of having lived through it.

This shared experience was in some ways real. However, it was also in some ways imaginary. Being in a concentration camp was not the same as being hidden by a family, which was not the same as fighting with partisans, which was not the same as spending the war years in difficult conditions in Siberia behind the Russian army’s lines. Nor was each of these things a single thing. Some concentration camps were death camps and some were not; certain families were kind to those they hid and certain families were cruel; there were partisans who welcomed Jews and others who shot them on sight, Jews evacuated by the Russians before the Germans arrived and Jews who underwent horrors before reaching safety. And these, too, are general truths behind which, and others like them, hid thousands and thousands of personal stories, no two of which were exactly alike. To treat them all as differing forms of “Holocaust survival” is to take no real interest in them or in those who lived them.

The same holds true of today’s abuse survivors and rape survivors and violence survivors. All of these terms are patterned on “Holocaust survivors” and all have the same pigeonholing effect. Yes, certain kinds of traumatic events have common features and may even lead to similar symptoms that need to be treated in similar ways. But trauma comes in all shades of origin, severity, and impact, and no traumatic event is perfectly identical with any other, to say nothing of the traumatized person’s ways of coping with it and of managing or not managing to overcome it. “#MeToo” is fine as a statement of solidarity. It becomes insulting when it means, “I know exactly what you’ve been through because I’ve been through it myself.” You have?

Ultimately, we’re all survivors of what life has had to throw at us, even if life is immeasurably harder on some than on others. Survival is not an identity, much less a badge of honor, and there are all kinds of ways to survive. In his Survival in Auschwitz, the Italian Jewish writer Primo Levi said of his concentration-camp experience:

One had to fight against the current; to battle every day and every hour against exhaustion, hunger, cold, and the resulting inertia; to resist enemies and have no pity for rivals; to sharpen one’s wits, build up one’s patience, strengthen one’s willpower. Or else, to throttle all dignity and kill all conscience, to climb down into the arena as a beast against other beasts, to let oneself be guided by those unsuspected subterranean forces which sustain families and individuals in cruel times. Many were the ways devised and put into effect by us in order not to die; as many as there are different human characters. . . . Survival without renunciation of any part of one’s own moral world—apart from powerful and direct interventions by fortune—was conceded only to very few superior individuals, made of the stuff of martyrs and saints.

Levi’s book, retitled by its American publisher, was called in Italian Se questo è un uomo, “If This Is a Man.” A man, not a survivor, was what he wanted us to think of him as.