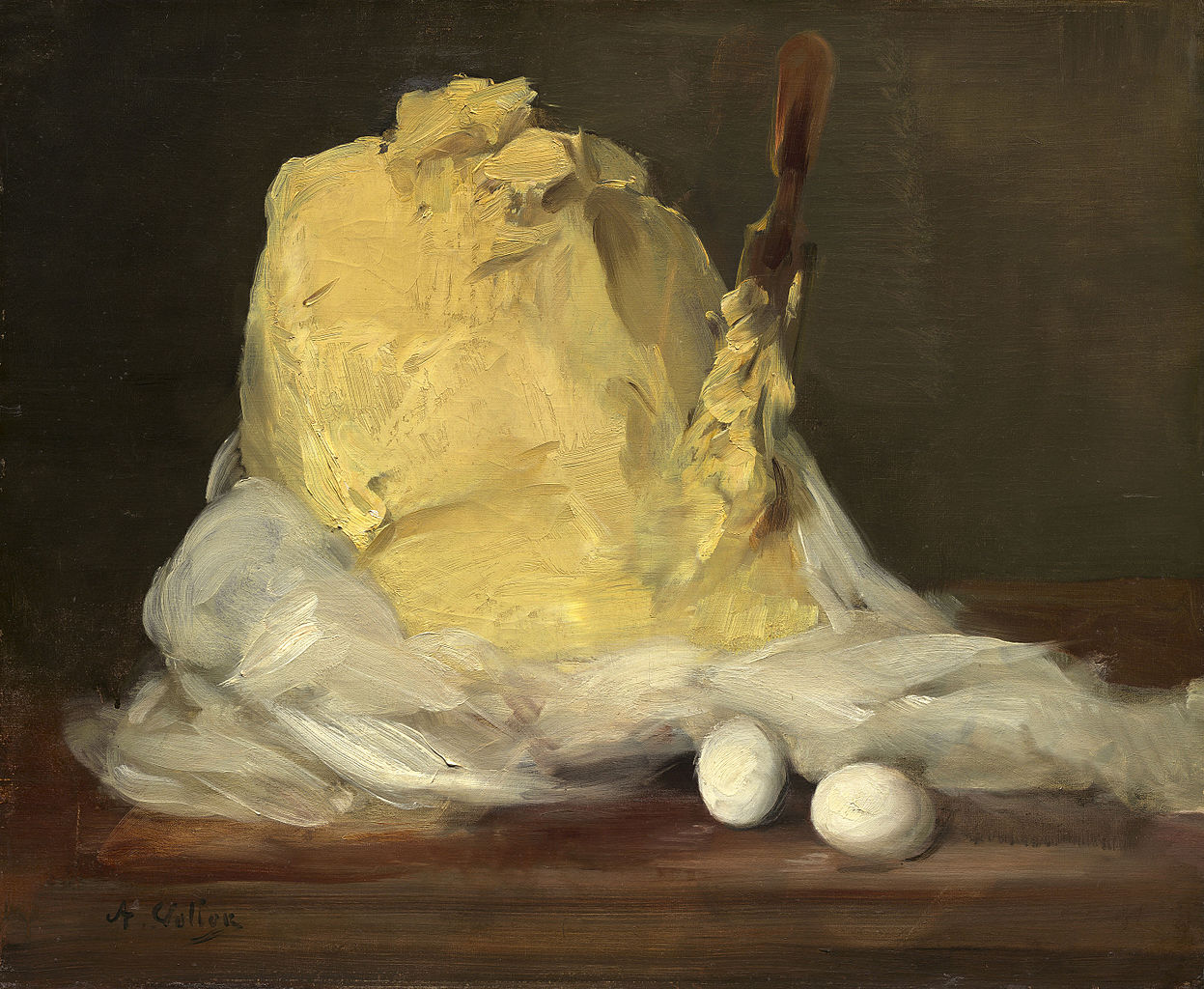 I was reading a column in [the Hebrew daily] Yediot Aḥaronot this week about the upcoming Israeli elections, and the columnist made a reference to Prime Minister Netanyahu having ḥem’ah al ha-rosh, “butter on his head.” Do you have any clue as to what this means? And where does the expression come from?

“To have butter on one’s head” in Israeli Hebrew means to be in a morally compromising or embarrassing situation that should (but doesn’t always) prevent one from provoking others or drawing their fire. “She’s accusing them?” someone might say. “She’s got butter on her head!”

This odd expression isn’t indigenous to Hebrew. Where did it come from? Why would anyone have butter on his or her head—and why would having it there mean what it does? When I wondered about this out loud to an Israeli friend, the immediate answer was:

“It’s from the story of Little Epaminondas!”

“E-pa-mi-non-das. He’s this little black boy. His grandmother gives him some butter to take to his mother, and he puts it under his hat. Naturally, it all melts. It was a book we had read to us as children.”

Adapted by its author, Sara Cone Bryant, from an Afro-American folktale, Epaminondas and His Auntie tells the story of a lovably earnest little boy who keeps misapplying what he is told. This starts with his being scolded by his mother when he brings home a piece of cake from his aunt that has crumbled in his hands:

“Epaminondas, you ain’t got the sense you was born with! That’s no way to carry cake. The way to carry cake is to wrap it all up nice in some leaves and put it in your hat, and put your hat on your head, and come along home.”

The next day Epaminondas’ aunt gives him some freshly churned butter. Keen on following his mother’s instructions,

Epaminondas wrapped it up in leaves and put it in his hat, and put his hat on his head, and came along home. It was a very hot day. Pretty soon the butter began to melt. It melted and melted, and as it melted it ran down Epaminondas’ forehead; then it ran over his face, and in his ears, and down his neck. When he got home, all the butter Epaminondas had was ON HIM.

And so it goes. Each time Epaminondas is taught how to do something right, he does it, with comical results, to the wrong thing.

It’s a charming tale, and the fact that Epaminondas was the name of a 4th-century BCE Theban general who defeated the Spartans in a famous battle only bears out its Afro-American origins, since blacks in the antebellum South were sometimes given Greek or Roman names by slaveowners who thought they were funny. (The story was in fact traced back to West Africa in a 1989 article in the journal Southern Folklore.) Alas, political correctness caused the book to be removed, along with Uncle Remus, Little Black Sambo, and other classics, from American library shelves in the 1960s and 70s, although it has been subsequently republished in a bowdlerized form, with its language turned into standard English.

But can the Epaminondas story be the source of the Hebrew expression ḥem’ah al ha-rosh? No way.

In the first place, it does nothing to explain why the expression means what it does. It may be embarrassing for Epaminondas to come home with butter all over him, but his situation is hardly comparable to that of a prime minister who attacks his opponents while under police investigation.

Far more to the point, though, is something else. There is, it turns out, a traditional Yiddish proverb that says, Ver es hot putr afn kop, tor af der zon nit geyn, “He who has butter on his head should not go out in the sun”—or, to resort to a rough English equivalent, “People living in glass houses shouldn’t throw stones.” Given that (a) the Yiddish speakers of Eastern Europe certainly didn’t get this from an Afro-American folktale, and that (b) the Yiddish influence on Israeli Hebrew has been great, and that (c) the proverb does make sense of the Hebrew expression “to have butter on one’s head,” there should be no doubt that it, not Little Epaminondas, is the expression’s source.

Moreover, the same proverb exists in other languages. In German it is Wer Butter auf dem Kopf hat, sollte die Sonne meiden. In French it takes the form of Si vouz avez du beurre sur la tête, n’allez pas au soleil. The Dutch say Wie boter op zijn hoofd heeft, moet uit de zon blijven. Czech and Hungarian have similar sayings. Romanian and Portuguese keep the “butter on the head” part while substituting “Don’t be a baker” or “Don’t go near the oven” for “Don’t go out in the sun.”

Fine, you say. Hebrew took it from Yiddish, and Yiddish took it from some other language. But why, to return to our original question, would anyone who is not Epaminondas have butter on his head? Who puts butter there?

There are two possible approaches to this question. One is to say that the butter of these proverbs stands for anything that can melt and has no significance in itself. English once had a saying, no longer in use, “He that has a head of wax must not walk in the sun,” and Italian has the same in Chi ha il capo di cera, non vada al sole. Who puts butter on his head? I’ll tell you if, first, you tell me who has a head made of wax. We’re not meant to take such images literally.

The other approach is to look for characters in history who did put butter on their heads. It has been suggested, for instance, that this was the Burgundians. These East Germanic invaders of Western Europe in the days of the Roman Empire were described by the 5th-century ecclesiast and Latin poet Sidonius Apollinaris, who lived among them, as infundens acido comam butyro, pomading their hair with rancid butter. “Happy is your nose,” Sidonius wrote, “if it does not have to submit to their odor.” One can sympathize with him—but, again, what does this have to do with our proverb any more than does Epaminondas? Not much, as far as I can see.

Equally suspect is the theory that our proverb came from the custom of peasant women bringing butter to market in baskets carried on their heads. Even assuming that they would have done such a risky thing, why should this have resulted in a warning to morally compromised individuals not to make themselves conspicuous by blaming others? It doesn’t seem likely.

More plausible is a different explanation involving marketplaces. According to this one, the original form of the proverb is the French one, and it goes back to an edict issued in 1481 by Jacques de Tourzel, chamberlain of King Louis XI, against dishonest vendors of dairy products. The penalty set by the edict for selling butter with impurities in it was to be placed in a pillory with “the butter on one’s head until it melts entirely . . . and the dogs come to lick it.”

It’s easy to see how being publicly exposed as a cheat in so humiliating a fashion could have led to the expression “to have butter on one’s head.” And although the guilty 15th-century French merchant did not venture into the sun of his own volition but rather was placed there by the authorities, it indeed seems possible that Si vouz avez du beurre sur la tête, n’allez pas au soleil comes from this punishment and was then disseminated to other European languages, Yiddish included.

And yet: there are French lexicographers who have thought that this proverb came to French from Yiddish or something analogous to it!

Two 19th-century French slang dictionaries make such an attribution. Alfred Delvau’s 1866 Dictionnaire de la Langue Verte states that the expression “to have butter on one’s head” derives from “the argot of thieves, who must have heard the Jewish maxim, ‘If you have butter on your head, don’t go into the sun: it melts and stains.’” Lucien Rigaud’s 1878 Dictionnaire du Jargon Parisien speaks of “Jewish thieves who have this saying in Hebrew.”

Jewish thieves, of course, didn’t speak Hebrew, and Rigaud must have mistaken some other form of speech for it. Could this have been western Yiddish, which was still spoken in the 19th century in Alsace? Or a thieves’ cant like Rotwelsch, which, though not restricted to Jews, had a high percentage of Hebrew words in it?

In any case, we are left with two opposed hypotheses, one that the expression “to have butter on one’s head” originated in 15th-century France and spread elsewhere, and the other that it came to France through the agency of Jews, possibly Yiddish speakers.

Is there any way of harmonizing these two positions? Perhaps so, but it would involve further speculation. I trust Mr. Mohrer will forgive me for stopping here.