The Bible's New Attitude toward Slavery

The Torah doesn’t outright end slavery, which was ubiquitous in the ancient world, but it does take the first steps toward ameliorating and transforming it. 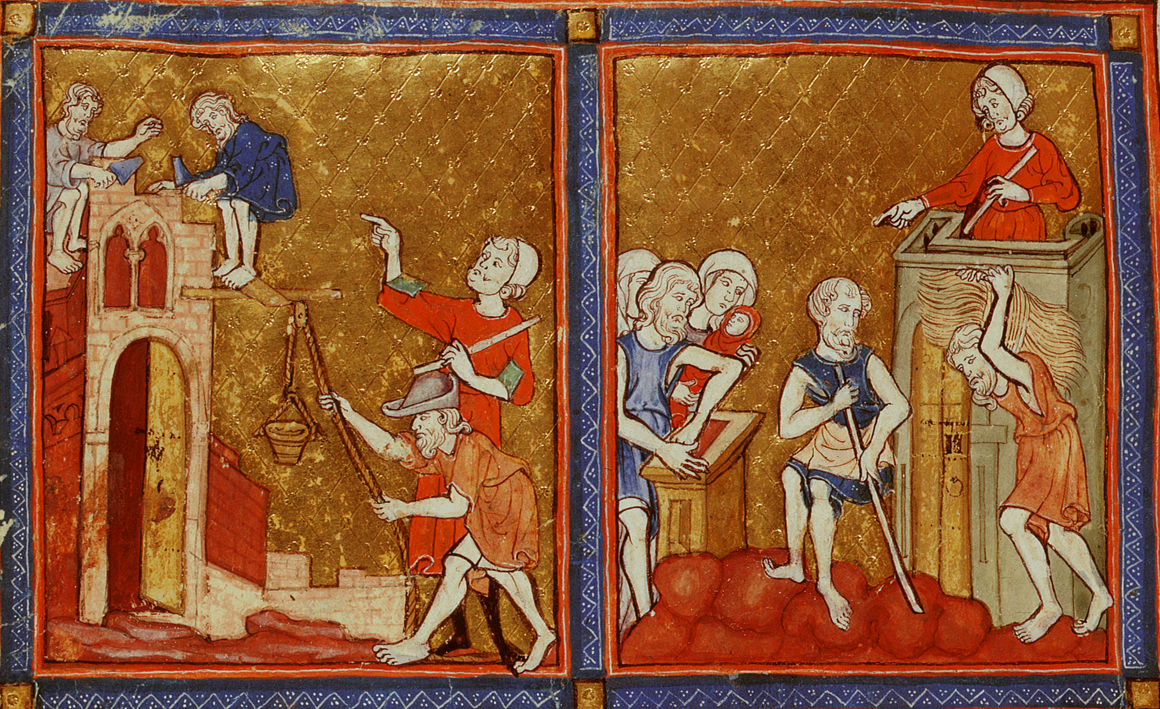 Pages from the Golden Haggadah showing the enslavement of the Israelites. British Museum

In the first part of the book of Exodus, after centuries of slavery in Egypt, God rescues the Israelites amid miracles and wonders. Their freedom, however, is not an end in itself but a precondition of their true national calling: the worship of God. Thus Moses first leads the Israelites not to the Promised Land but to Mount Sinai, where God reveals Himself and gives them the Ten Commandments. In this week’s Torah reading of Mishpatim (Exodus 21-24), which follows immediately thereafter, the Israelites are given the outline of an entire legal system, complete with instructions on tort law, financial regulations, the prohibition on witchcraft, and the agricultural holidays—a first taste of the legislation that will take up much of the remainder of the Pentateuch.

It is surprising, then, that Mishpatim, which inaugurates the legislative portion of the book of liberation, begins by speaking of slavery: “When you acquire a Hebrew slave, he shall serve six years; in the seventh year he shall go free, without payment.” This topic consumes the first 27 verses of the parashah, which in itself suggests just how far the Israelites have come: from being slaves themselves in a foreign land to being prospective owners of slaves in their own land, governed by their own laws.

At a glance, it might even seem that the oppressed have become, or are about to become, the oppressors. Yet a closer look shows that the placement of this passage is neither haphazard nor contradictory but instead forms a crucial link between the narrative and the legal segments of Exodus—beginning with the very first verse, which mentions not just slavery but also emancipation. For the Torah goes on to elaborate: after seven years, a slave purchased as an individual is to be set free alone. If he was acquired along with his family, he is to leave with them. If, as a slave, he married and had children with another of his master’s slaves—presumably a non-Israelite woman who does not benefit from the same seven-year clause—he is required to leave his family behind.

Then comes the final case, the details of which  present an even stronger contrast to the exodus from Egypt:

The doorpost here evokes the doorposts upon which the Israelites placed blood on the eve of their redemption from Egypt. By forgoing the opportunity for freedom, the slave has regressed, symbolically stepping through the doorpost that ushered him into freedom back into the condition of slavery. Moreover, the particular sequence of the slave’s request—“I love my master, my wife, and my children”—suggests that his love for his master takes precedence over even his love for his family. Perhaps Scripture allows him to remain a slave, then, because he is unprepared for freedom.

The Talmud is even starker in its condemnation of his choice:

God said: “This ear heard My voice on Mount Sinai when I said: ‘For to Me the children of Israel are slaves’ [Leviticus 25:55], which indicates [that] they should not be slaves to slaves. And yet this man went and willingly acquired a master for himself. Therefore, let his ear be pierced.” (Tractate Kiddushin 22b)

In this reading, even as the law admonishes the now-free Jews to become people who hold fast to freedom, it acknowledges that some people will choose slavery.

There is, however, another reading: that the Israelites, perhaps chastened by their experience of slavery’s very worst excesses, are here adopting a gentler, less brutal form of slavery than what they knew in Egypt. Indeed, the slave’s choice here is not a simple one: the ties that bind him to slavery also bind him to his family. And even if the slave in this case does not seek to keep the widest possible range of options open for himself (as most modern readers instinctively expect all persons to do), he remains an agent in his own destiny.

Slavery was ubiquitous in the ancient world, a key part of its economic and social institutions, and the Bible does not upend that state of affairs. Taking slavery as a necessity, it instead introduces the subtle but distinct point that it ought not be permanent. With this in mind, we might find it easier to understand the next law, based on an even more startling scenario: “If a man shall sell his daughter to be a maidservant, she shall not go out as the menservants do.”

There are two ways of reading this verse—either that female slaves are not entitled to automatic emancipation in the seventh year, or that they specifically do not benefit from the rule (given later in the chapter) that a slave who is severely injured by his master must be set free. Either way, the young woman sold into slavery would seem to possess even fewer rights than her male counterpart.

Yet the following verses reveal a rather different picture:

If she is displeasing in the eyes of her master, who should have designated her for himself [i.e., married her], he shall assist in her redemption; he shall not have the power to sell her to a foreign people, for he has betrayed her. If he had designated her [as a wife] for his son, she must be treated like a daughter. If he should take another as a wife [in addition to the slave-girl], he shall not diminish her food, her clothing, or her conjugal rights.

As with the male slave, a girl sold as a minor does not experience slavery as a life sentence. The hope, it seems, is that she will be integrated into her master’s household as a full member. True enough, moderns would be aghast at the notion that a man could purchase a woman who has not yet reached adulthood and then marry her. But it is not hard to see why in an ancient context it might have been an appealing alternative to a life of significantly greater difficulty or deprivation.

Consider some possible scenarios of a girl whose father sells her into slavery. The material situation of her family may have become so dire as to convince him that this is the best option for her own well-being, ensuring that she will have food and shelter and that the money realized by the sale will allow the rest of the family to survive. Or perhaps, less flatteringly, he is simply so callous and unloving as to sell his daughter for the sake of a few shekels, which is not exactly an ideal family situation to begin with. Compared with either of these two scenarios, the carefully regulated and circumscribed form of slavery legislated in Mishpatim emerges as the best among imperfect options.

And there is more at play here. Unlike slavery as we know it—an instrument of turning human beings into chattel—slavery in Mishpatim opens up possibilities rather than closing them down. In fact, the principle that a maidservant may not be denied her rights to food, clothing, or marital intimacy becomes the foundation in Jewish law for the obligations that rest upon every Jewish husband. Thus the Bible transforms a debased institution, which it has just rebuked and punished in one of the most famous narratives in human history, remaking it into an instrument of greater opportunity for the individual caught in slavery’s toils.

The legal codes of the Pentateuch ought not be seen as guidelines for creating an ideal society in a utopian sense. To the contrary, rather than relegating morally fraught situations like slavery to the margins, it places their regulation first and foremost among its civil laws. The same attitude can be seen at work in other sections of Mishpatim, and in the Torah as a whole, in rules and regulations dealing with crime, with carelessness toward another’s property, with poverty—and with the gamut of human passions. The underlying assumption is that these things must be dealt with, but (or because) they cannot simply be done away with.

In that spirit, rather than subverting or undoing Exodus’s narrative of liberation, the opening verses of Mishpatim translate it into a legal idiom—these are not laws of slavery, but laws of freedom. In recalling the institutions that oppressed the Jewish people in Egypt, they prepare the ground for a society built not upon the backs of slaves but on the desire to redeem them.

Where the Egyptians saw slavery as a permanent and natural condition, and the Egyptian Pharaoh resisted his slaves’ emancipation at all costs, the Torah turns slavery into a temporary condition from which slaveholders must be willing to let the indentured go free. At the same time, it recognizes that freedom is not merely imposed from without; freedom is ultimately for those who, unlike the slave whose ear is drilled with an awl, truly desire it.

That not every slave is entirely ready for freedom is vividly illustrated by the Israelites’ own repeated backsliding, complaining, and rebelliousness, as we read abundantly in the Torah’s narrative following the Exodus. Perhaps that is another reason why, having given us the story of the Israelites’ redemption from slavery, the Torah turns to examining, to regulating, and ultimately to rectifying the institution itself.

The Bible's New Attitude toward Slavery