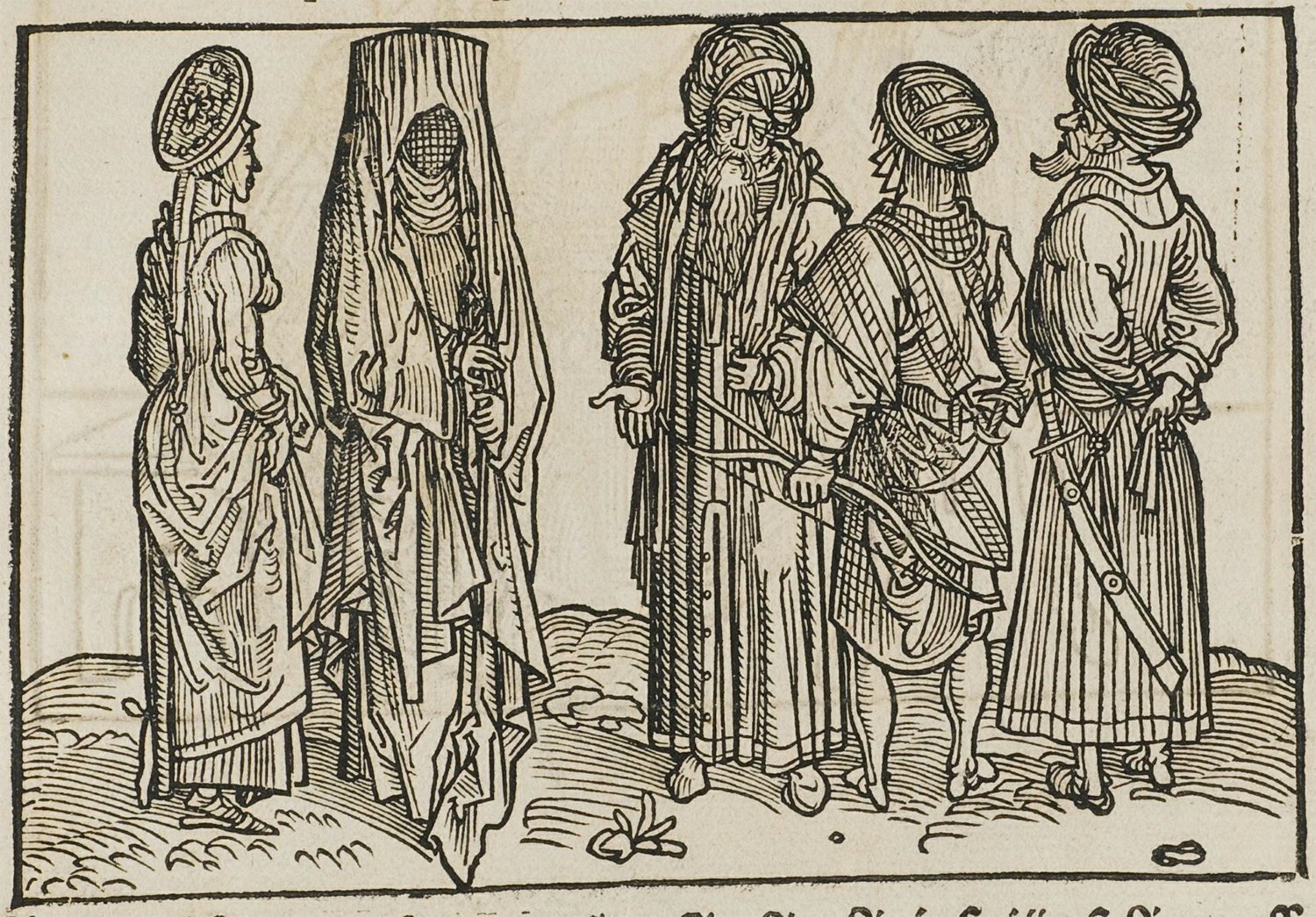 The word “Saracen” has me puzzled. It’s said to be traceable to the time of the Crusaders and to the Arabic verb saraqa, to steal, but I’ve also read that it’s been derived from the biblical Sarah, the Saracens supposedly being an Arabian tribe descended from her.

How did Arabs become descendants of Sarah?

This is a timely question, given that we have just finished reading about the lives of Sarah and Abraham in the Torah portions of the last several weeks. Brenda Rossini is certainly right to be puzzled. “Saracen,” my Random House dictionary says, refers to

One would think that if anyone in the story of Sarah and Abraham would be associated with Arabs and Islam it would be Abraham, the father by Hagar of Ishmael, who is the progenitor of the Ishmaelites or Arabs according to the Bible and the first Muslim according to Islamic tradition. So why Sarah?

It was certainly not from Sarah that the Saracens, an Arabic-speaking tribe or people known to the ancient Greeks and Romans, originally received their name. The first reference to them on record is in Ptolemy’s 2nd-century CE geography, in which a people called the Sarakēnoi are mentioned as inhabitants of northwest Arabia. We hear of them, too, in Eusebius’ early-4th-century History of the Church. There, in describing the fate of a Christian bishop who fled with his wife from persecution in Egypt to “the mountain region of Arabia,” Eusebius writes:

He never came back, and despite a thorough search, the brethren failed to find either them or their remains. In that same mountain region, very many [Christians] were enslaved by the half-civilized Sarakēnoi. Some of them, with great difficulty and at great cost, were ransomed; others never to this day.

If the name Sarakēnoi came, as Brenda Rossini has seen said of it, from the Arabic verb saraqa, this was presumably because the Saracens had a reputation as plunderers; another suggested derivation has been from Arabic sharq and sharqi, “east” and “easterner.” At any rate, it is not until the 5th century that we encounter the claim of a connection between the Sarakēnoi and Sarah.

This is mentioned by the biblical translator Jerome in his commentary on Ezekiel and discussed at greater length in the work of the 5th-century Church historian Salminius Hermias Sozomenos, better known as Sozomen. After describing a military campaign fought by the Saracens against the Romans, Sozomen says of them:

This is the tribe which took its origin and had its name from Ishmael, the son of Abraham; and the ancients called them Ishmaelites after their progenitor. As their mother Hagar was a slave, they afterward, to conceal the opprobrium of their origin, assumed the name of Saracens, as if they were descended from Sarah, the wife of Abraham. Such being their origin, they practice circumcision like the Jews, refrain from the use of pork, and observe many other Jewish rites and customs. If, indeed, they deviate in any respect from the observances of that nation, it must be ascribed to the lapse of time, and to their intercourse with the neighboring nations. . . . Some of their tribe, afterward happening to come in contact with the Jews, gathered from them the facts of their true origin, returned to their kinsmen, and are inclined to the Hebrew customs and laws. From that time on, until now, many of them regulate their lives according to the Jewish precepts.

According to Sozomen, then, it was the Saracens themselves who first traced their name back to Sarah. Indeed, before the advent of Islam in the 7th century, there were several Jewish and Judaizing tribes in the Arabian Peninsula. Claiming descent from Sarah would have been less a matter of “concealing the opprobrium” of being called Ishmaelites by Christians or Jews (Ishmael and Hagar, in the book of Genesis, are sympathetically portrayed characters of whom there is no need to be ashamed) than of proudly asserting their Jewish identity.

Although Sozomen’s account seems plausible, it is impossible to verify. What is clear is that when Muhammad’s followers came storming out of Arabia, Saracen had become a word used by Christians to denote not Jewish Arabs but Muslim ones. Thus, Sophronius, the Christian patriarch of Jerusalem, addressing the city’s faithful on the eve of its conquest by a Muslim army in 637, prayed to God “to break the pride of all the barbarians, and especially, of the Saracens who, on account of our sins, have now risen up against us unexpectedly and ravage all with cruel and feral design, with impious and godless audacity.”

Throughout the Christian Middle Ages, Saracen was a term that denoted both a Muslim and a barbarian or pagan, two things that were considered nearly synonymous, since the only non-Christians known to the Christian world, apart from Jews, were the Muslims bordering on it. The noted 15th-century French lexicographer Firmin la Ver, for instance, defined Saracenos in his Latin-French dictionary as paganos and added the etymology a Sara dicitur quasi ex Sara genitus, that is, “Said to be from Sarah, as being descended from her.” The “said to be” and “as being” can be taken to indicate that la Ver, though he had no other derivation to propose, had his doubts about this one.

So, too, did others. The anonymous author of the 13th-century French romance L’estoire du Saint Graal tells how the New Testament figure of Joseph of Arimathea, in search of the holy grail, came to a city named Sarras “between Babylon and Salamandre,” and adds:

It was from this city that the Saracens first came; and they are called Saracens after this city of Sarras. And do not believe those who say that they are named after Sarah, the wife of Abraham, because this is an invention and does not seem reasonable. It is not unknown that Sarah was a Jewess, and her son Isaac was a Jew, and all his descendants were Jews. Since from the smaller part one takes the whole, and since the Jews descend from Sarah, it does not seem right that the Saracens took their name from her.

In La Queste del Saint Graal, an Arthurian romance contemporary with L’estoire du Saint Graal, one also finds the imaginary city of Sarraz, qui lors estoit sar-razins, “in which were the Saracens.” It appears as well in Thomas Malory’s Morte d’Arthur, although Malory, while aware that Sarras or Sarraz had something to do with the Saracens, confused things and wrote:

And so [Joseph of Arimathea and his party] labored till that they came to a city that hight [was called] Sarras. And at that same hour that Joseph came to Sarras there was a king that hight Evelake, that had great war against the Saracens, and in especial against one Saracen, the which was King Evelake’s cousin . . . and his name was called Tolleme la Feintes.

And so by 1485, when Malory’s work was published, Sarras had become an anti-Saracen outpost while the Saracen-Sarah connection had been forgotten entirely. Since then, little has changed apart from the fact that the word Saracen itself, in its sense of Muslim or pagan, has become archaic. Ask an Englishman today who the Saracens are and he will tell you that they are a London rugby team and the current British champions.