Podcast: Wilfred McClay on the Warming Relations between Christians and Jews

The author of our July essay joins us to talk about his ideas. 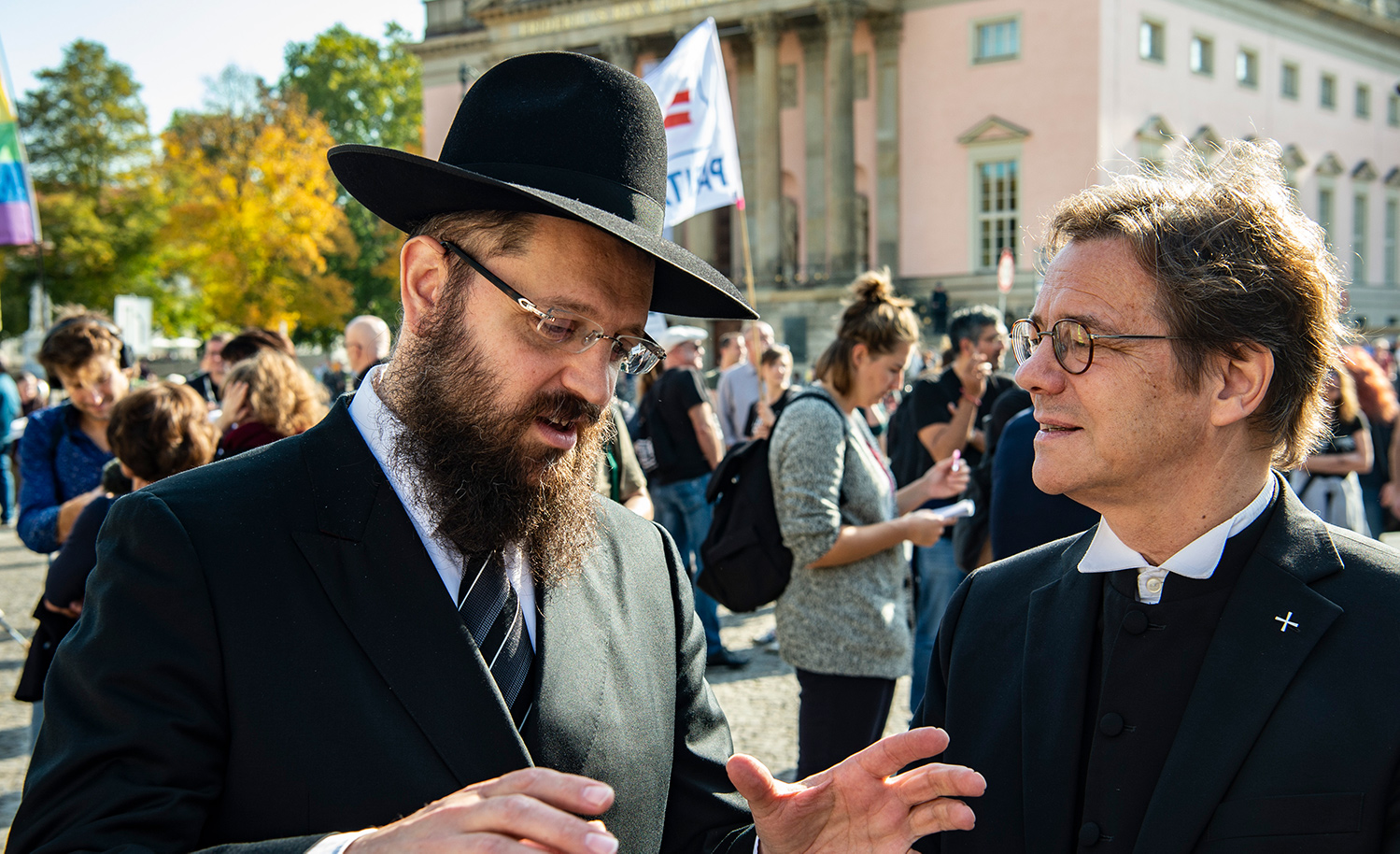 Yehuda Teichtal, left, of the Jewish community in Berlin, and Markus Dröge, bishop of the Protestant church in Berlin, at a demonstration against anti-Semitism in 2019. Paul Zinken/picture alliance via Getty Images.

Observation
Tikvah Podcast at Mosaic and Wilfred M. McClay
About the authors

Wilfred M. McClay is professor of history at Hillsdale College and author of Land of Hope: An Invitation to the Great American Story (Encounter, 2019).

After centuries of antagonism and persecution, the second half of 20th century introduced profound changes to the relationship between Jews and Christians. In the shadow of the Holocaust, post-war America witnessed a flowering of interfaith dialogue, often spearheaded by the more liberal wings of both religions. This flowering was made possible by identifying the lowest common denominators between Judaism and Christianity—a shared attachment to the Hebrew Bible, similar ethical commitments—and eliding the more serious theological differences between them.

Today, perhaps, we are witnessing a different kind of rapprochement, not between the most progressive (and now weakly affiliated) Jews and Christians, but between some of the most traditional and committed members of both faiths. This historic new cooperation is the topic of Wilfred McClay’s July 2020 essay in Mosaic, “What Christians See in Jews and Israel in 2020 of the Common Era.” And in this podcast, he joins Mosaic’s editor to explore his ideas in greater depth.

We are aware of how much we need one another, for the sake of the world. It’s an extraordinary thing to say that we should set aside centuries of murderous enmity, persecution, etc. for the sake of the historical moment. But we should. And we should find a way to do that with integrity. This is where I think the theological argument that McDermott and others have made is so interesting and promising. It’s not just that we need to make common cause on the basis of a certain set of principles that are foundational to us, that we believe are essential. It’s that the Jewish-Christian relationship is more than that. They are deeply entwined with one another, and especially for Christians. You might be able to understand Judaism entirely independently of Christianty but you can’t understand Christianity independently of Judaism. The nature of that relationship is baked-in, for Christians certainly.

So you want to find some basis to articulate that commonality and to ground it in things that are theologically shared. And this notion of the Abrahamic covenant is a place to begin; the persistence of the Abrahamic covenant rather than its suppression. The persistence of the Jewish people as enjoying―or being burdened by, if you prefer―a special relationship, a special responsibility ordained of God in the world. This is where the whole issue of particularism is so important, of rethinking particularism, so that it doesn’t violate the nature of God. It may violate the enlightenment notion of God, but it doesn’t violate the notion of God, the God of Abraham, Isaac and Jacob. That he behaves in different ways with different people at different times and he’s not bound to a principle of logical consistency.

Podcast: Wilfred McClay on the Warming Relations between Christians and Jews