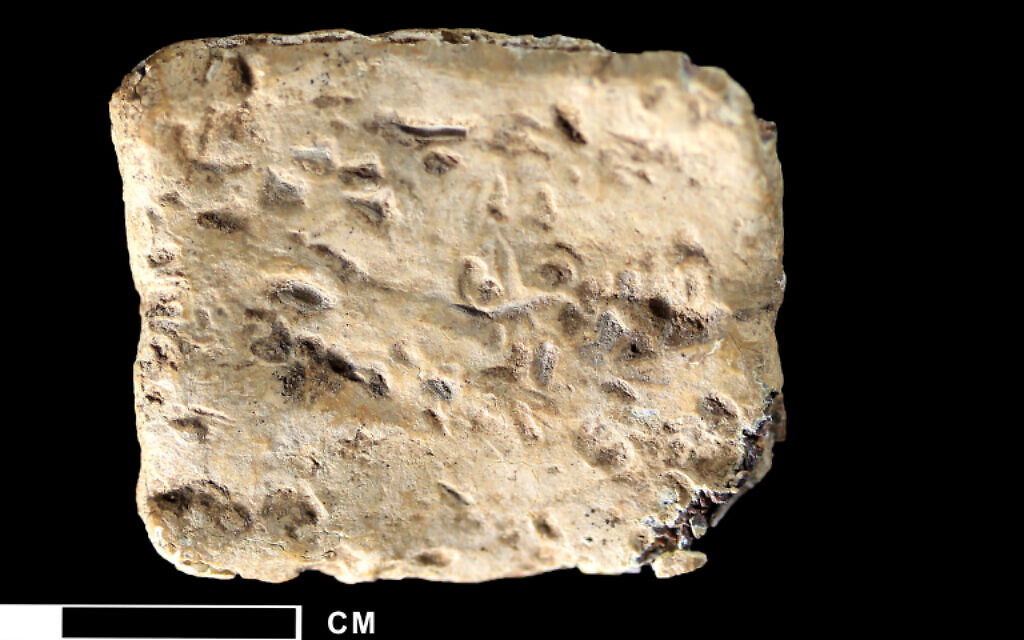 The outside of a recently discovered artifact with an ancient Hebrew inscription on it. Michael C. Luddeni/Associates for Biblical Research.

“An earthquake in biblical scholarship”—so the recent discovery of an ancient, amulet-like Hebrew inscription tentatively dated to the 13th century BCE has been called. The inscription was found in debris from an archeological dig on the biblical Mount Eval, which rises to the north of the Palestinian city of Nablus, the biblical Shechem.

“Earthquake” is not overstating it. If the proposed dating and decipherment of the inscription’s proto-Canaanite script prove to be correct, the result will be a radical revision in the thinking of biblical scholars. The Bible’s account of the early history of the Israelite people, their settlement in the Land of Israel, and the time frame in which this took place will have to be taken far more seriously than it generally has been until now.

Here, first in Hebrew, then transliterated, and then translated, is the reading proposed by the inscription’s decipherers,

This imprecation needs to be read against the background of Chapter 27 of the book of Deuteronomy. There Moses tells the tribes of Israel that, after crossing the Jordan into Canaan, they are to convene at a site overlooked by Mount Eval and its counterpart of Mount Gerizim to Shechem’s south, whereupon they will listen to the blessings that will accrue to them for obeying their Deity proclaimed from Mount Gerizim and to the curses that will befall them should they disobey called out from Mount Eval. Each of the latter will begin with the word arur, “cursed,” and will be solemnly affirmed by an “amen” of the gathering.

This Deity is not called Yahu in the Bible. Rather, he is known as Yah, or more frequently, by a vocalized form of the Hebrew consonants Yod-Heh-Vav-Heh that is conjectured to be Yahweh. Yet he does appear as Yahu in the suffix of many names, such as Yirmiyahu/Jeremiah (“Yahu will raise up”), and Yeshayahu/Isaiah (“Yahu will save”). And for good measure, the Israelites’ entry into Canaan following their exodus from Egypt and wandering in the desert is dated by biblical chronology to the 13th century BCE!

It’s a remarkable archeological find. And one might add to it a linguistic footnote.

This note has to do with the inscription’s phrase mot tamut, “you shall surely die.”  Literally, these words mean “to die you shall die,” and they are an example of what is known to biblical grammarians by the imposing name of the paronomastic or tautological infinitive absolute—a construction, found in ancient Hebrew and a number of long-extinct northwest Semitic languages like Phoenician and Ugaritic, in which the same verb occurs twice, the first time in an uninflected and atemporal form like the infinitive mot, “to die,” and the second time in an inflected and past-or-future form like tamut, “you shall die.” Taken together, these two forms of the verb act as an intensifier. They’re a way of saying, “You’re not only going to die, you’re going to die for absolute certain,” and they’re generally translated with the help of adverbs like “surely,” “indeed,” “certainly,” and so on.

The tautological infinitive absolute is common in the Bible, starting with the second chapter of the book of Genesis, where we find the same mot tamut in God’s injunction to Adam, “Of every tree in the garden [of Eden] you may indeed eat, but of the tree of knowledge of good and evil you shall not eat, for on the day you eat it, you shall surely die.”  In fact, there are in this sentence two tautological infinitive absolutes, because “you may indeed eat” is akhol tokhel, “to eat you will eat.”

Eventually, the tautological infinitive absolute faded from Hebrew. As the books of the Bible proceed from the earlier to the later ones, the usage grows increasingly rare, and it is never encountered in post-biblical Hebrew unless the writer wishes to sound an archaically biblical note. Most likely it first dropped out of spoken Hebrew in the Second Temple period, after which its disappearance from written Hebrew gradually followed.

But here’s the thing: despite vanishing from spoken and written Hebrew over 2,000 years ago, the tautological infinitive absolute lives on in Jewish speech. One finds it in ordinary Yiddish—and the case of mot tamut is a good example.

We’re living in a time of COVID. Suppose I want to say to a friend in Yiddish, “The omicron variety is very catching, but if one catches it, one won’t die”: how, using the verb for “to die,” shtarbn, would I phrase the last part of the sentence? There are various possibilities. I might say, vet men nisht shtarbn. I might say, zikher shtarbt men nisht. And I also might say, shtarbn shtarbt men nisht, that is, “to die one doesn’t die.” In other words, though Yiddish grammar books don’t use the term, I might resort to the tautological infinitive absolute.

Such a usage is not uncommon in Yiddish, particularly in “yes, but” sentences, as in these sample exchanges:

Redstu english? (“Do you speak English?)

Yo, redn red ikh, nor ikh farshtey nisht vos men redt tsu mir. (“Yes, to speak I speak, but I don’t understand when people speak to me.”)

Where did Yiddish get this usage from? I know of no European language that has it, certainly none to which Yiddish might have been exposed. The conclusion must be that it comes from the tautological infinitive absolute of biblical Hebrew. This is not so surprising when one considers that Yiddish has been enormously influenced by Hebrew in general and by the Hebrew of the Bible in particular. On the whole, though, this influence has expressed itself in the borrowing of individual words and phrases, not of grammatical constructions, let alone a construction of which the earliest known case now appears to go back to the 13th century BCE. A Yiddish phrase like shtarbn shtarbt men nisht has, it turns out, may have an over-3,000-year history.

This footnote deserves a footnote of its own. The tautological infinitive absolute exists as well in modern Israeli Hebrew, which took it not directly from the Bible but from Yiddish. The Israeli who wants to tell someone that omicron won’t kill him also has several options, one of which is lamut lo tamut mizeh, “to die you won’t die from it.” It’s not quite the mot tamut of the Mount Eval inscription, but it’s close enough to give one an extra little thrill.

Got a question for Philologos? Ask him yourself at [email protected]ne.com.