An impressive new book explores how a community rooted in faith and law has grappled with the preeminent classical rationalist. 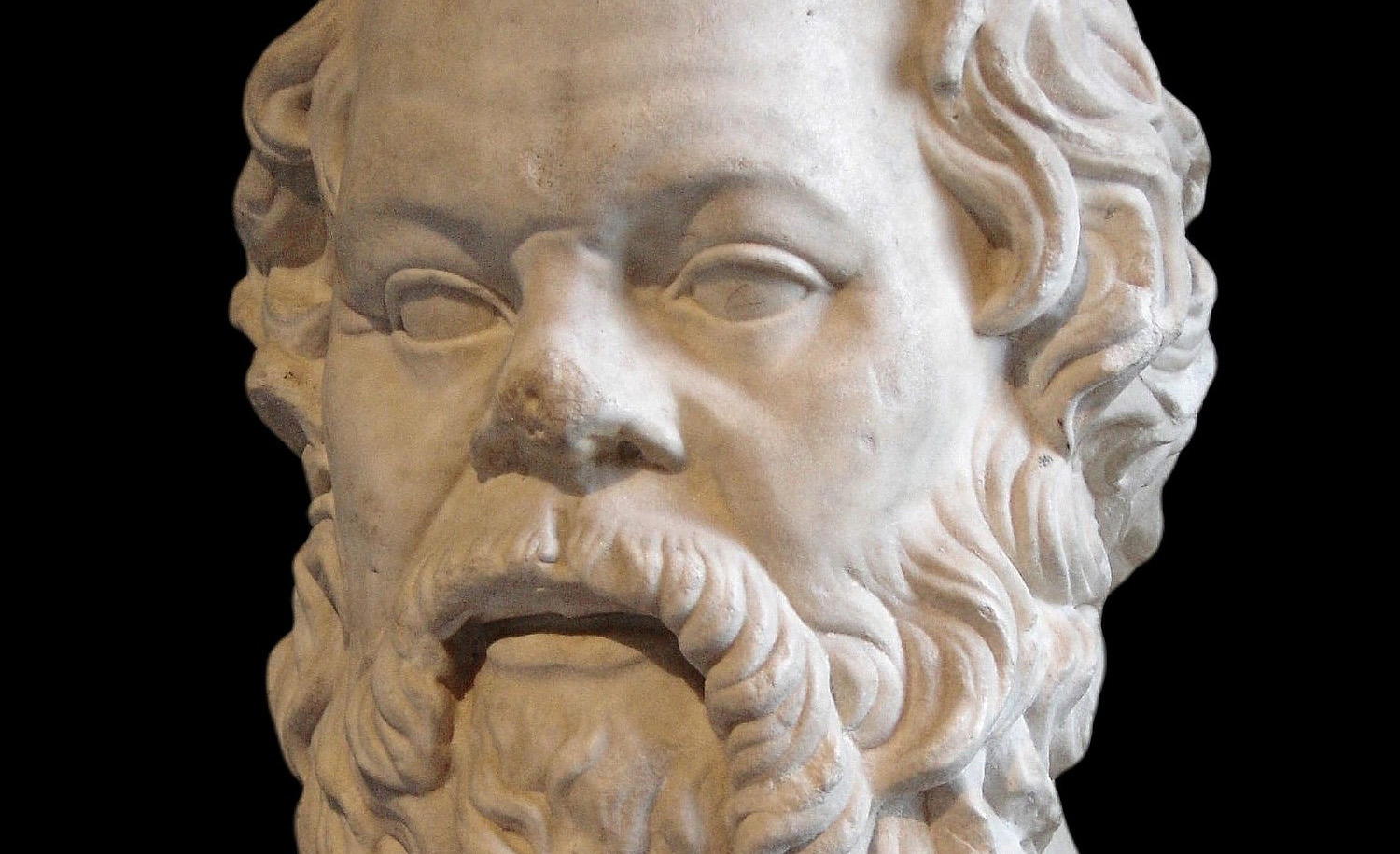 Portrait of Socrates in marble, 1st century CE, perhaps a copy of a lost bronze statue made by Lysippos. Wikimedia.

Observation
Alexander Orwin
About the author


Alexander Orwin is assistant professor of political science at Louisiana State University. He is currently working on a wide-ranging project examining the use of Plato’s Republic in Islamic philosophy.

Socrates (469-399 BCE) personifies our notion of a universal figure. Despite leaving nothing in writing, his relentless quest for the philosophic truth in the marketplaces and schools of Athens has resonated across time and place, while his trial and placid death at the hands of the city, ostensibly for corrupting the youth with impiety, served only to increase his posthumous renown. Not only did Socrates teach Plato and Aristotle, whose works form the bedrock of the Western philosophical canon, but he also influenced Rome through Cicero, the Islamic world through Alfarabi and Averroes, and Christendom through Aquinas, Dante, and their many successors. Even modern European thinkers who claim to reject much of the legacy of antiquity, such as Rousseau, Adam Smith, and Nietzsche, were fascinated by the figure of Socrates. In contemporary universities, the constant ebb and flow of trendier subjects has not dislodged Plato’s Republic, a dialogue in which Socrates in the main character, from its spot near the top of lists of the most frequently taught books. Winston Churchill, a notoriously poor student whose preoccupation with urgent, life-and-death matters of war and politics fostered a healthy contempt for the “talkative professor” that was Socrates, nonetheless asked the right question: “Why had his fame lasted through all the ages?”

Readers of this magazine might want to know how the Jews figure in this story. As a people, the Jews might well share Churchill’s resistance to Socratic questioning, for their own peculiar reasons. A community whose stubborn adherence to its faith and law has allowed it to survive centuries of both intense persecution from the surrounding society and intense pressure to assimilate into it, would naturally rebuff philosophic efforts to question its beliefs and practices from within. Yet the pull of Socratic texts and ideas was too strong to reject outright. An impressive new book by the Israeli philosopher and historian Yehuda Halper, Jewish Socratic Questions in an Age Without Plato, describes how the best and brightest Jewish minds of the Middle Ages came under Socrates’s spell.

This does not mean that the Jews swallowed Socrates whole. The adroit thinkers treated in Halper’s book all managed to wear their Socratic baggage lightly and unpack it in a selective fashion carefully designed to lessen the impact of its contents on their faith. They were aided in this endeavor by the limited availability of genuine Socratic texts in their time: while vestiges of Platonic dialogues and other sayings attributed to Socrates survived, the full Platonic corpus did not. Knowledge of the Greek language had gradually disappeared, so medieval readers were dependent on translations into Arabic, but we cannot verify, even today, the form in which dialogues such as the Apology and Republic were translated. It was therefore surprisingly easy for some Jewish intellectuals to portray Socrates as a wise but pious ascetic.

Halper’s discussion of this peculiar depiction of Socrates culminates in a translation of an extraordinary prayer of uncertain, late medieval origin, in which the “Divine Socrates” addresses the “God of my fathers, . . . my Rock, and my Redeemer.” While this devout Socrates uses the occasional philosophical term, his faith in a purely monotheistic God and His power to respond to prayer offered with a pure heart remain in accord with Jewish orthodoxy. This tendency to reduce Socrates to the prevailing beliefs of the time is hardly unique to Judaism: many Americans believe that he advocated for the right to free speech at his trial, an argument that one seeks in vain in Plato’s account of the proceedings.

This approach to Socrates, at once respectful and dismissive, did not satisfy the most formidable thinkers of the period, such as Yehuda Halevi and Maimonides. They strove to articulate a more philosophically compelling version of the Socratic teaching, without undermining Judaism in the process. Halevi clearly had access to Socratic sources that presented the philosopher as the skeptic that he was. Informed by a passage from Plato’s Apology that had been transmitted by Islamic philosophers, Halevi argued that Socrates was wise in human wisdom alone. Thus Halevi could both praise Socrates’s wisdom and sharply distinguish him from the truly religious men who possess divine wisdom. Halevi also presents Socratic wisdom as a goal pursued in isolation among a few philosophic friends, rendering its skepticism about divine matters less threatening to society as a whole. The Khazar king in Halevi’s Kuzari, who ultimately converts to Judaism, is not particularly perturbed by Socrates or philosophy.

Halevi dared to mention Socrates; Maimonides envelops this famous name in silence. Yet Halper convincingly shows that Maimonides addressed Socratic problems by tackling the complicated relationship between free philosophic inquiry and religious belief. He did so by writing two very different books, each intended for a distinct audience. In the Mishneh Torah, a highly influential codification of Jewish law, Maimonides articulates an acceptable form of orthodoxy that encourages the study of Torah while forbidding philosophic inquiry. This is meant to suffice for a large number of his readers. However, it turns out that the deepest reasons in favor of the Torah, including its prohibitions against idolatry and arguments for the incorporeality of God, cannot be understood without philosophic inquiry. Maimonides therefore writes his great theological work the Guide of the Perplexed as a “punishment” for those “heretics” who are not satisfied with orthodox belief. It shows them how they can engage in philosophic inquiry without undermining the practical tenets of religion. Maimonides therefore aims to bring rest to believers by affirming and strengthening their belief, and rest to doubters by leading them toward philosophical cognitions. Despite their vast theoretical disagreements, both groups are expected, like Maimonides himself, to obey the religious law.

Halper concludes his book with informative accounts of some lesser-known Jewish thinkers of the late Middle Ages. Their access to the Socratic tradition came mainly through Maimonides and his Muslim counterpart Averroes, a polymath and commentator on Aristotle and Plato whose works were widely translated into Hebrew. Like Maimonides, Averroes recognized a potential discrepancy between philosophy and the religious law, be it Islamic or Jewish, and reckoned with it by writing demonstrative books for philosophers, and juridical books for less inquisitive minds. These later Jewish authors, in contrast, tended to avoid legal questions, concentrating on logic, intellection, and cognition instead. They were nevertheless aware that their pursuit of these sciences might provoke accusations of heresy, so they couched their work in allegories and images.

The 14th-century philosopher Levi Gersonides wrote a commentary on the Song of Songs, but one which draws more inspiration from Averroes than from traditional rabbinic sources. Its attribution of erotic pursuit of knowledge to the biblical love poem even induces Halper to speculate about possible Platonic influences from such dialogues as the Symposium. Yet while Gersonides appears confident in his knowledge of physics, he remains a metaphysical skeptic, unsure if the lover can ever prevail over his beloved in this domain. This uncertainty leaves room for religious belief and speculation. Such a defense of piety nevertheless does not satisfy all of the orthodox: Gersonides’s 15th-century successor Bibago was widely regarded as a heretic for his efforts to interpret famous scriptural images like the burning bush as symbolizing conjunction with the intellect, in which the mind is “enflamed but not consumed.” Halper thus concludes his book with the acknowledgement that the Socratic philosophy or “open inquiry” that he has probed so thoroughly in it was never fully and unconditionally accepted by Jews.

What lessons, then, are we to garner from Halper’s book? The thinkers it treats argue for Socratic philosophy and its use of reason and logic all while managing to retain membership in the Jewish community. None suffered the fate of Spinoza, the 17th-century philosopher famously excommunicated by the Jews of Amsterdam for his heretical views. Instead, they justified philosophy by means of resources available within Judaism, including the commandments of the Law, the aspiration to knowledge of God, and the allegories of the Bible. Yet all took care to prevent their more heterodox teachings from spreading among average members of the community. Thus the medieval Jewish community managed to absorb an impressive variety of philosophic teachings in an impressive variety of ways, but always in careful doses that would not upset or even dilute its beliefs.

Indeed, it is possible that something inherent in Socratic philosophy recommends such an approach. The skeptical way of life it championed may have been universal, but it could flourish only within and across particular communities, so it prudently learned to accept the integrity of these communities’ beliefs. Because Socrates’s disciples, Jewish or otherwise, showed respect to the beliefs of their communities, none of them suffered their master’s violent end. This was a particular concern of the Muslim Alfarabi, who carefully distinguished the ways of the politic Plato from those of the rash Socrates.

Later rationalistic teachings of nationalism or enlightenment took a more aggressive approach, seeking to transform traditional communities for their own political and cultural ends. The following comment by Leo Strauss, a philosopher of Jewish origin who did much to revive serious appreciation of Socratic philosophy in the 20th century, is instructive:

One cannot help comparing the period of German Jewry with the period of Spanish Jewry. The greatest achievements of Jews during the Spanish period were rendered possible partly by the fact that Jews became receptive to the influx of Greek thought, which was understood to be Greek only accidentally. During the German period, however, the Jews opened themselves to the influx of German thought, the thought of the particular nation in which they lived—a thought which was understood to be German essentially: political dependence was also spiritual dependence. This was the core of the predicament of German Jewry.

It follows that the cautious methods used to absorb Socratic philosophy in the medieval period might not work against the more pervasive pressures of the modern era. Halper does not, as far as I can tell, offer any advice for how a devout Jew should handle the peculiar conditions of today. Instead, he contents himself with a general conclusion: “While [the philosophers’] answers differ in justification, all of them thought that the philosopher and scientist should continue to live a Jewish religious life, while continuing to question.” This confidence in the amenability of reason to faith is touching and perhaps compelling, but does it suffice to face the cultural and intellectual challenges posed by the more assertive rationalism of our time?