A newly released academic study hints as much. 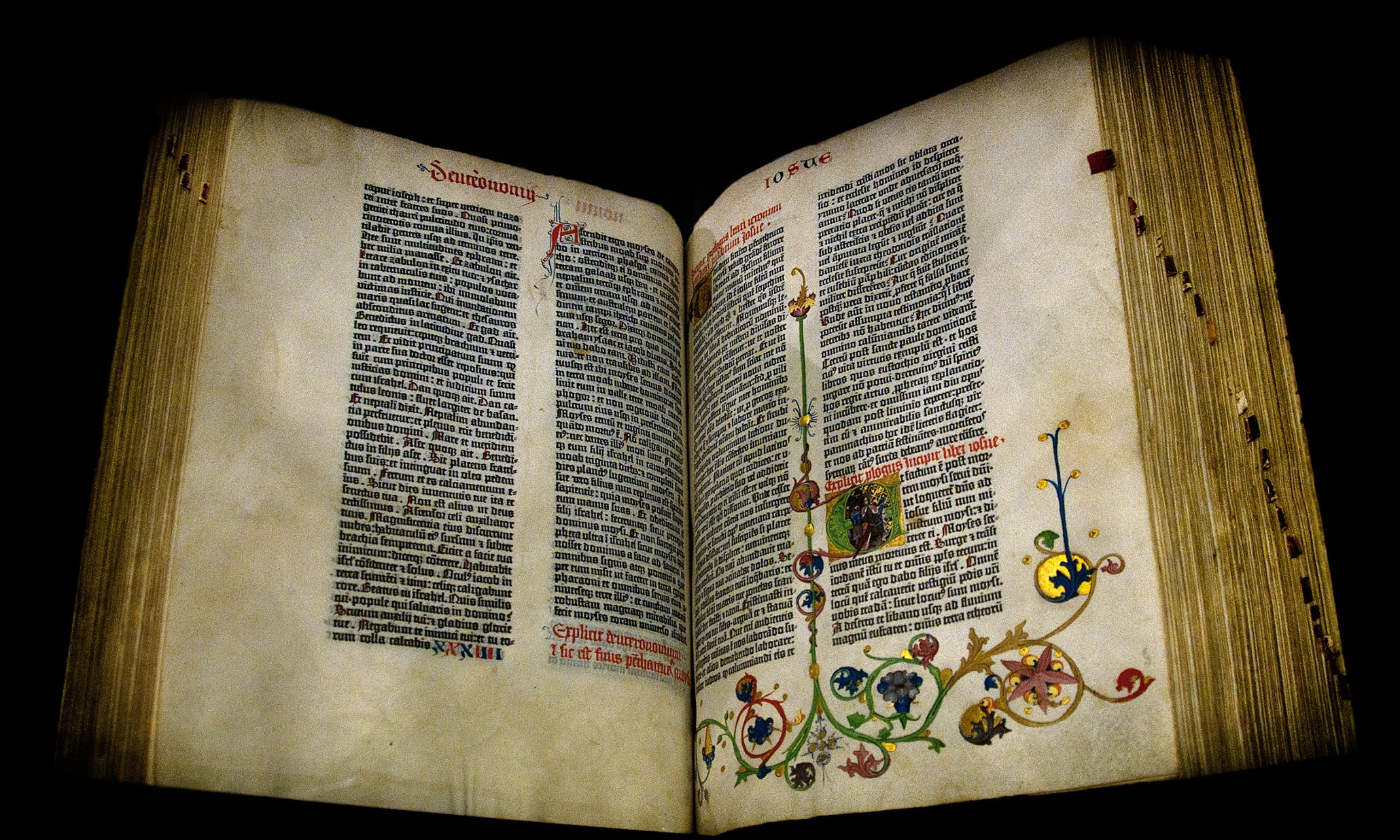 You wouldn’t think a lecture on “Quantifying Paper-Ink-Type Interaction” would be news. You especially wouldn’t think it after reading, in the proceedings of last August’s convention of the International Association of Paper Historians, a dry abstract of this lecture stating that the goal of its Israeli presenters, Moshe Rosenfeld, Eyal Nimny, and Elyakim Kessel, was “to “provide quantitative metrics extracted from printed texts in order to reveal systematic patterns of variability.” Not even being told by the abstract that such “metrics” were brought to bear “on early printed Hebrew works” would have prepared you for last month’s newspaper reports that some of this material consisted of two printing sheets, comprising 32 pages of a 15th-century siddur that was older than the 1454-55 Gutenberg Bible and thus a remnant of Europe’s earliest printed book.

Rosenfeld, a Jerusalem book dealer, came across the two sheets in 2015, when he found them concealed in an old book binding. The sleuthing which brought him to believe in their antiquity is impressive, one of its elements being a careful study of 15th-century watermarks, the signature of paper makers that can tell us the approximate time and place of their product. (In this case, Rosenfeld says, they show that the paper was produced between 1418 and 1439.) Yet Rosenfeld could never have built a case for the siddur’s being a European first without the work of another detective who laid the ground for it over a hundred years ago. This was the French clergyman Pierre Henri Requin (1851-1917), a Catholic vicar and art historian who in 1891 published a study entitled Les origines de l’imprimerie en France, “The Origins of Printing in France.” Requin’s study is alluded to in chapter on “The Printed Book” in the Jewish historian Cecil Roth’s 1959 work The Jews in the Renaissance, which helped point Rosenfeld to his conclusions—and since Roth, rather uncharitably, failed to mention Requin by name or give him his due, let us do so now.

While engaged in research in the municipal archives of the southern French city of Avignon, Requin came across a file of old Latin legal documents dating to the 1440s and pertaining to a certain Procopius Waldfogel, a goldsmith and native of Prague then living and working in Avignon. Two of these documents, drawn up by a local notary, dealt with an agreement between Waldfogel and a local resident referred to as Davino de Caderossia, Judeo, de Avinione, “Davin [David] de Caderousse, a Jew, of Avignon.”

Davin, sometimes subsequently referred to simply as ipso judeo, “the above Jew,” was a dyer by trade, and on March 3, 1446 he entered into an exchange agreement with Procopius. Davin took it upon himself to instruct Procopius “in the art of dyeing well, faithfully, and perfectly in textures of scarlet, red, brazilin [brasilhum], and black, . . . and to make known to him the true formula for dyeing in walnut and in green without fire [sine igne].” Dyeing “without fire” or cold dyeing, which (as opposed to the traditional method of soaking fabrics for a long time in heated dye) called for the use of mordants to bind the dye to the fabric, was at the time a carefully kept professional secret.

What Procopius pledged to do for Davin was more unusual. It was, according to the notarized document, “to make, and having made, to provide and deliver 27 Hebrew characters properly formed and cast in iron [viginiti septem litteras ebreyacas formatas, sisas in ferro], in keeping with the knowledge and practice of writing, which the above Procopius, so he affirms, has taught the above Jew these past two years; and with this, to provide him with devices of wood, pewter, and iron.” Davin undertook to pay for the materials of these “devices and machines for Hebrew writing” [artificiorum sive ingeniorum scripture ebrayaca] and not to reveal to anyone the “theory and practice of the knowledge” that Procopius had imparted to him. Procopius, for his part, promised to pay Davin the sum of “ten florins in the currency of Avignon” for his dyeing lessons, at which point he would have returned to him “the collateral and tools” that he had deposited with Davin as a surety to guarantee payment.

The 27 characters that Davin received would have been the 22 letters of the Hebrew alphabet plus the final forms of the letters kaf, mem, nun, peh, and tsadi. The agreement, however, was short-lived. A month-and-a-half later, on April 26, 1446, the Avignon notary drew up a quittance that abrogated it. Its terms were that Davin, having failed to keep his promise to teach Procopius his knowledge of dyeing, agreed to forgo the ten florins owed him and to return all of Procopius’ surety except for “a coat and 48 letters cast in iron” while retaining “all the machines, devices, and instruments designed for artificial writing in Latin letters” (omnia artificia, ingenia, et instrumenta ad scribendum artificialiter in littera latina) that he had purchased. In addition, he promised to abide by the original secrecy clause and to refrain from divulging “the art of artificial writing” to anyone within a distance of “30 leagues” (roughly 100 miles) from wherever Procopius resided.

And with this we hear no more of Procopius Waldfogel or Davin de Caderousse. They disappear from the pages of history, leaving us ignorant of many things. To begin with, what precisely was the “art of artificial writing,” with its “machines” and “devices,” that Procopius was in possession of? Was it the same technique as that developed by Gutenberg, then living in Strasbourg, which was to result in a printed Bible several years later? And if so, was it an independent development on Procopius’ part or was it related to Gutenberg’s work? Requin, who describes attempts to connect the two men, speculates that Procopius might have lived in Strasbourg after leaving Prague and even worked for Gutenberg, a goldsmith like himself, and mentions a tradition that Gutenberg almost twice had his invention stolen. Yet Requin concedes that there is no evidence that Procopius ever was in Strasbourg, let alone that he stole Gutenberg’s invention.

There are unanswered questions regarding the quittance agreement, too. Why did Davin, who had just finished two years of an apprenticeship with Procopius and certainly must have known what he was agreeing to, so quickly renege on his commitment to teach Procopius his dyeing methods? Why do we read in the March 10 agreement about 27 Hebrew letters and in the April 26 quittance, which makes no mention of them, about 48 Latin letters that Davin was allowed to keep? (This number would have included the 24 ordinary letters of the medieval French alphabet, which had no v and w, plus their 24 capitals.) Or even, getting down to the small details: what did Davin want Procopius’ coat for?

And yet the most important question now has an answer. Cecil Roth wrote in 1959:

It is evident that the idea of printing in the present-day sense was in the air in 1444. The obvious deduction is that Waldvogel [sic] had either anticipated, participated in, or become acquainted with the invention. . . . David de Caderousse, with the Jewish aptitude for scenting out a new idea, obviously hoped to use it for the production of Hebrew books. . . . Whether in fact anything had actually been printed [by him] during the intervening period [between 1444 and 1446] is unknown; certainly, nothing has survived.

Thanks to Moshe Rosenfeld, we now know that 32 pages of a Hebrew siddur printed at the time have survived. It is true that there is no way to prove beyond a doubt that the siddur was the work of Davin de Caderousse—and even assuming that it was, it wasn’t necessarily printed between 1444 and 1446. As the 1446 quittance makes clear, Davin kept a press and Hebrew and Latin sets of movable type when he and Procopius parted ways and could have printed the siddur at a later date.

Still, Rosenfeld’s find is an astonishing confirmation of Requin’s research. Europe’s discovery of printing, which was already known to the Chinese and other Asian peoples, was one of the great turning points in the history of Western civilization. It would be astonishing, too, if a Jew beat Gutenberg to it.