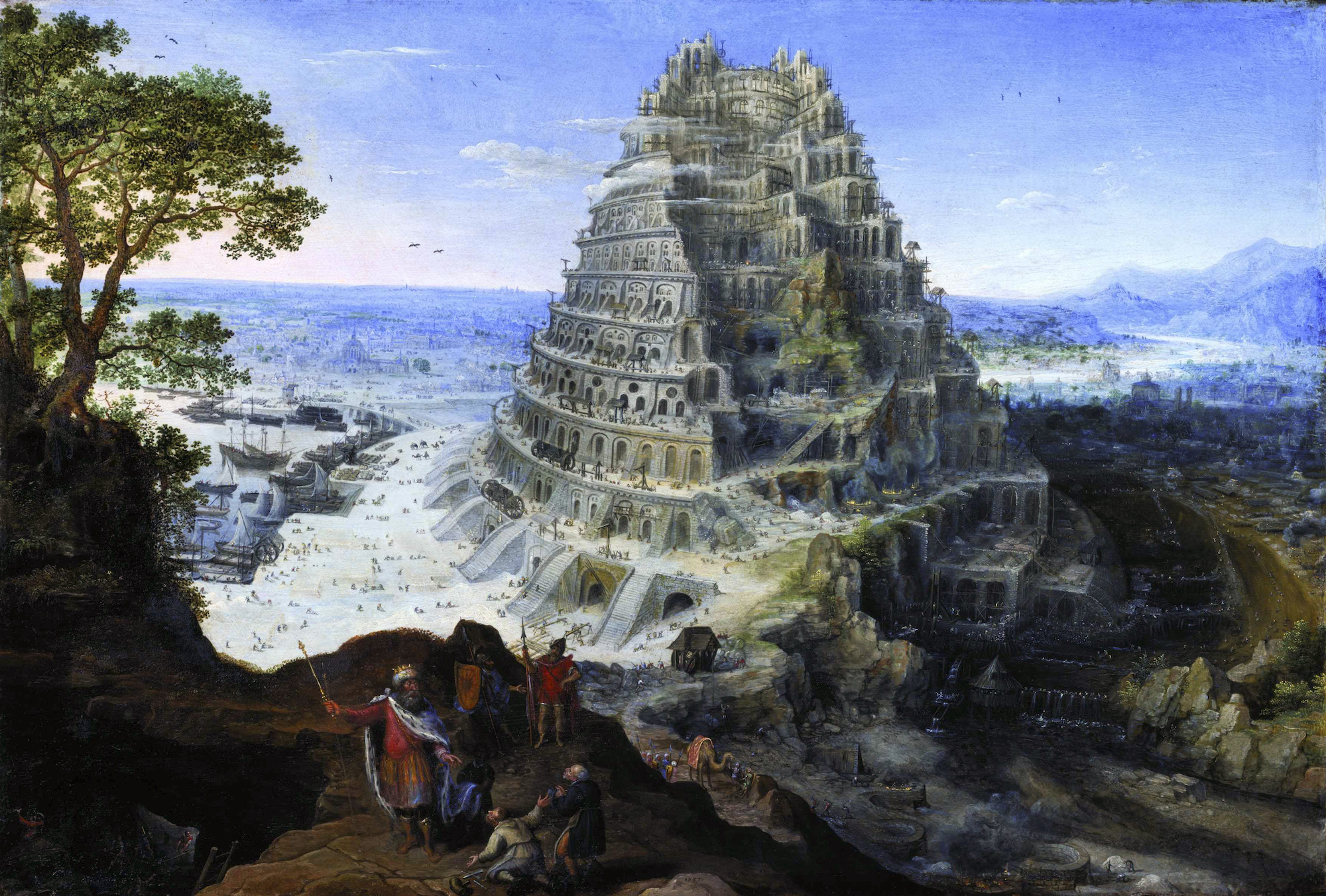 From The Tower of Babel by Lucas van Valckenborch, 1595. Wikimedia.

Two years ago, in conjunction with the Torah reading of Noaḥ and its story of the Tower of Babel, I wrote a column about Nostratics, a field of historical linguistics based on the theory that a large number of the world’s languages and language families traditionally thought to be unrelated actually have a distant common ancestor. An idea first developed in the early 20th century by the Danish linguist Holger Pedersen, who coined “Nostratic” from the Latin word nostras, “of our country” (from noster, “our”), its pursuit has gradually gone from a fringe discipline to a respected one, though one whose claims are still disputed by many and perhaps most linguists.

Indeed, Nostraticians themselves cannot agree on what language families should be considered descendants of Nostratic. Pedersen was conservative in this respect, even though the families included by him embrace a huge number of contemporary speakers spread over a vast part of the globe. These are the Indo-European family, which takes in nearly all the languages of Europe, of which English, Spanish, Portuguese, and French spread to the Americas, plus Kurdish, Persian, and such Sanskrit-derived tongues of north India as Hindi and Bengali; the Afroasiatic family, to which belong the Semitic languages, among them Arabic, Hebrew, Amharic, and Tigrinya (the latter two spoken in Ethiopia and Eritrea), and the African groupings of Berber and its dialects, Chadic, Cushitic, and Omotic; and the Uralic and Altaic families, which are sometimes lumped together and with which are classed Finnish, Estonian, Hungarian, probably Turkish, and possibly Korean and Japanese.

There are many “probably’s” and “possibly’s” in Nostratics, as might be expected of a field that seeks to connect seemingly unconnected languages on the basis of a relatively small number of resemblances between them. When two or more languages exhibit similarities in their vocabulary, grammar, or morphology (that is, in the ways in which they form words), it is always necessary to ask whether such factors as coincidence, borrowing, and convergence (the phenomenon whereby two unrelated languages grow alike due to the proximity of their speakers) are not better explanations than common ancestry.

If, for instance, the indigenous Alaskan language of Yupik has a word for fire, ingne, that reminds one of ignis, the Latin word for fire (which has many Indo-European parallels), is this any reason to think that Yupik and Latin might be related? If medu meant mead or honey in proto-Indo-European (the hypothetical reconstruction of the Indo-European parent language) and mete meant the same thing in proto-Finno-Ugrian, is this evidence of shared ancestry, or might one have borrowed it from the other? If “m” and “b” are similarly articulated consonants, and a single syllable containing the “b”-sound denotes “in” in Semitic languages while a single syllable containing the “m”-sound denotes the same thing in the Dravidian languages of southern India, should we consider this fact of any importance?

Such examples, which come from the fourth (2021) edition of the prominent Nostraticist Allan Bomhard’s A Comprehensive Introduction to Nostratic Comparative Linguistics, are of course extremely simplistic. In reality, any resemblances between Yupik and Latin, or proto-Indo-European and proto-Finno-Ugrian, or the Semitic and Dravidian languages, would only be significant were there enough of them to make a systematic case—and the quest for this “enough,” as well as the debate over what constitutes it, is a central concern of Nostratics and a ready target for its critics. Bomhard himself is especially vulnerable to such criticism because he is a maximalist who casts his nets as widely as possible: to the language families recognized as Nostratic by Pedersen, he adds Dravidian, the Kartvelian languages of the Caucasus (such as Georgian and Circassian), the Chukchi-Kamchatkan languages of eastern Siberia, and such long-extinct languages as Etruscan, which was spoken in central Italy, and Sumerian, whose homeland was southern Iraq.

But whether the number of its descendants is minimalistically or maximalistically conceived of, where and when would Nostratic have been spoken? Citing the work of his fellow Nostraticist Aharon Dolgopolsky, Bomhard states:

The ancient Nostratic language seems to have existed in the Pre-neolithic period (up to ca. 15,000 or 12,000 BCE) somewhere in southwest Asia, . . . that is to say, in the Near East, in the vicinity of the Fertile Crescent just south of the Caucasus.

The pre-Neolithic (or Mesolithic, as it sometimes is called) period is the age in which, on the Eurasian continent, human beings began the momentous transition from a nomadic hunter-gatherer style of life to a sedentary agricultural one, while the Fertile Crescent, which has been called “the cradle of civilization,” is a designation for the long, sickle-shaped swathe of land between the Arabian desert and the high mountains of the Caucasus, starting with Egypt’s Nile Valley, running up through Israel and Lebanon to the headwaters of the two great rivers of Mesopotamia, the Euphrates and the Tigris, and descending with them to the Persian Gulf. It was in this area, culminating in the Neolithic age (commonly dated from about 10,000 to 4000 BCE), that much of animal husbandry first developed, that basic grains, pulses, and other foods were first cultivated, that reading and writing were invented, and that the world’s first great empires rose and ruled. In it, the theory goes, Nostratic was first spoken, and from it Nostratic’s speakers, aided in their competition with other groups by their greater technological and social development, gradually came to dominate a vast area.

It would be too complicated to go into the details of the reasoning that leads Bomhard and others to this conclusion. It involves a thorough knowledge of Eurasian prehistory; the techniques of glottochronology, the branch of linguistics that dates rates of language change, and hence, of the time required for two or more languages to diverge to their end-state from a common source; an analysis of which languages in the hypothesized Nostratic community are closer to each other and which more removed; the transfer of these findings to a geographical grid that would enable one to point to Nostratic’s probable epicenter; and finally, a well-educated guess as to the time and place in which Nostratic—let us call it Parent Language A—split into Descendant Languages B and C, which in other times and places divided into D, E, F, and G and H, I, J, and K, which then subdivided further. Although millennia might have gone by while this happened, at the end of which Languages W and Z—Italian and Inuit, say—might be spoken many thousands of miles apart and have no obvious relation to each other, both would still be recognizable to the knowledgeable linguist as belonging to the Nostratic family.

And here’s the thing: “the Fertile Crescent just south of the Caucasus” puts us, if not exactly where the Tower of Babel would have stood, not very far from there, a few hundred miles to the north, in what was to become the Assyrian Empire. Can it be that the story of the tower, before whose collapse, we are told, “the whole earth was of one language and of one speech,” but following which “the Lord did there confound the language of all the earth,” actually reflects a dim folk-memory of the breakup of Nostratic?

A Nostraticist, I suppose, would scoff at such a possibility, or at least say, “I am dealing with linguistic science. If you prefer to deal with imaginative fantasies based on religious texts, that’s your right, but don’t invoke me as your authority.” That’s fair enough. There are linguists who consider Nostratics an imaginative fantasy, too. I think they’re wrong, but I wouldn’t go so far as to swear on a Bible that the Bible had nothing to do with it.