A professor of Russian and Jewish studies joins us to talk about the tenuous situation of Russian Jews and their leaders. 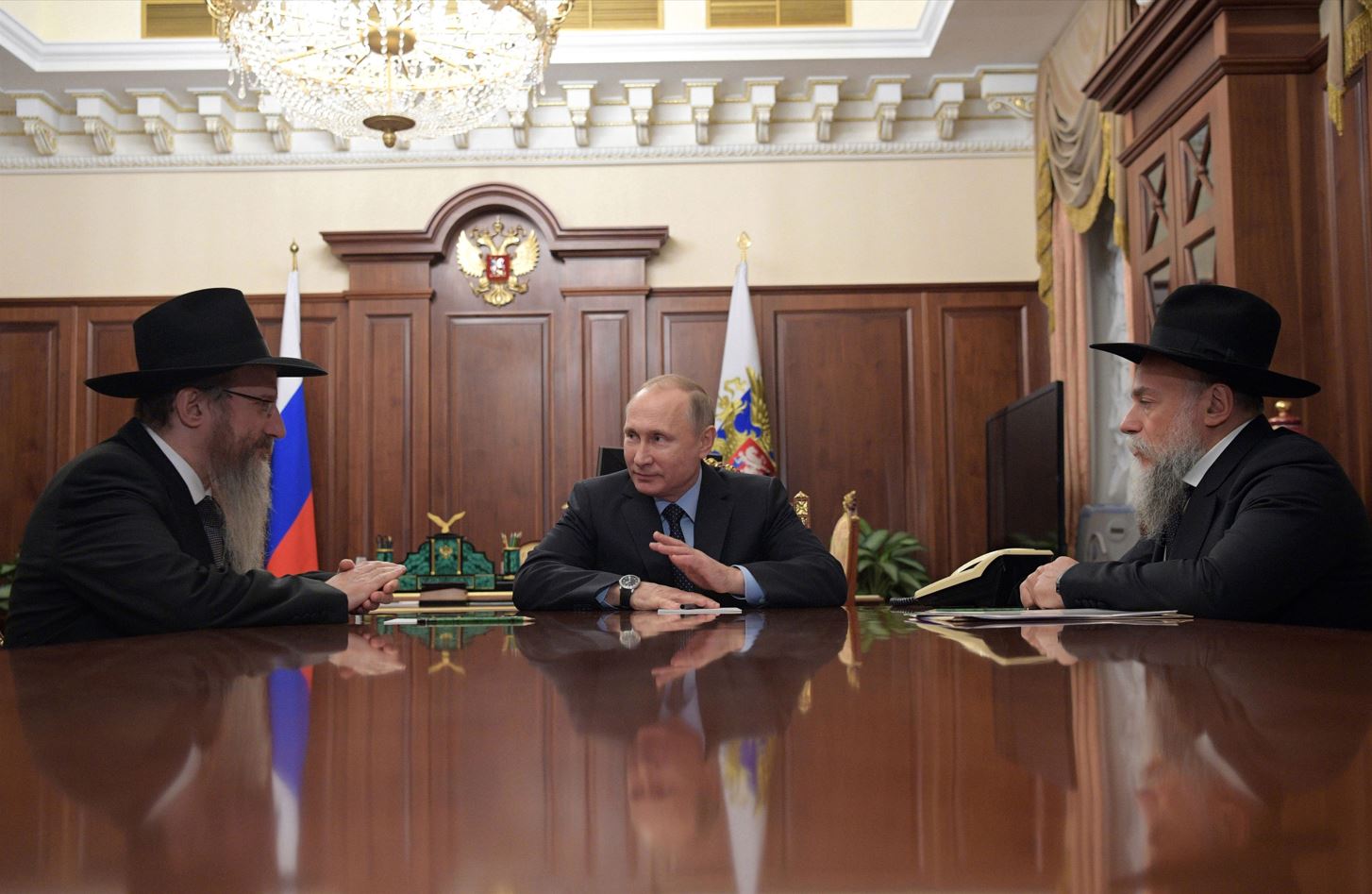 Vladimir Putin speaks with Berel Lazar, the chief rabbi of Russia, and Alexander Boroda, head of the Jewish Communities’ Federation, in Moscow in 2016. ALEXEI DRUZHININ/AFP via Getty Images.

Observation
Maxim D. Shrayer and Tikvah Podcast at Mosaic
About the authors


Maxim D. Shrayer is a professor at Boston College and the author, most recently, of the collection Of Politics and Pandemics. His new memoir, Immigrant Baggage, is forthcoming in March 2023.

On February 24, when Russian president Vladimir Putin began his country’s invasion of Ukraine, Jewish leaders found themselves caught on opposing sides of an active war. Ukrainian rabbis have suggested that the war is a holy fight between good and evil. Jewish religious leaders in Russia, meanwhile, have come under heavy pressure to denounce the war publicly, which most of them have thus far avoided doing, no doubt in part since the Russian government is now cracking down on dissent. Instead, they’ve generally taken a publicly pacifist position, arguing that all war is bad and that holiness can be found in peace.

On this week’s podcast, Maxim D. Shrayer, a professor of Russian, English, and Jewish studies at Boston College, joins Mosaic’s editor Jonathan Silver to discuss how those Russian Jewish leaders have tried to balance their competing priorities. As Shrayer points out, though many of them likely oppose the war, they’re also called to care for their communities, maintain functional relations with the political authorities, and preserve what their congregants have built up over the decades since the end of the Soviet Union. So what are the moral obligations of Russia’s Jewish leaders right now?

The Jewish religious leaders have several degrees of separation [from the Russian government], and this is why in a sense one has a different expectation of them than, perhaps, of the Russian Orthodox Church, which is seen as basically at this point a propaganda tool for Putin. The problem, is that I don’t think anybody has the hard evidence that would tell us what exactly that degree of separation is, and what exactly the unwritten script is that the Jewish religious leaders in Russia are expected to follow by Putin’s regime.

We have to infer the policies on the basis of the practice. This is one of the hardest things for historians and cultural historians especially. In a sense it’s a little bit like the Jewish situation in the former Soviet Union. Let’s say they are introducing the rhetoric of anti-Zionism which is kind of directed against Israel but becomes an unspoken rhetoric against anything self-consciously Jewish. At the same time, of course if hard-pressed, nominally, it is not anti-Semitic to the Soviet propaganda machine, it’s anti-Israel. With the present situation, I think the degree of separation is not just physical, it is also metaphysical, and that’s why I think it’s so challenging for the Western mind to wrap oneself around it. How do you imagine the metaphysical separation in a dictatorship?

Just to give you a counter-example. Imagine, is it like the situation in Pinochet’s Chile, where there were Jewish leaders, religious, communal, that collaborated with Pinochet’s regime? There were top Jews in Pinochet’s government, generals, and then there were those who actively opposed Pinochet and were persecuted. So the question is, how do we judge the collaboration of those Jews who are in with the regime? I think one could say, if you are a Jewish general of the air force in Pinochet’s government, you collaborate, there’s no degree of separation. But this situation is different.