The Maccabees, the Greeks, and the Origins of the Conflict Between Hellenism and Hebraism

What the Maccabees called their enemies reveals much about how both cultures saw themselves and what the conflict between them meant for the world. 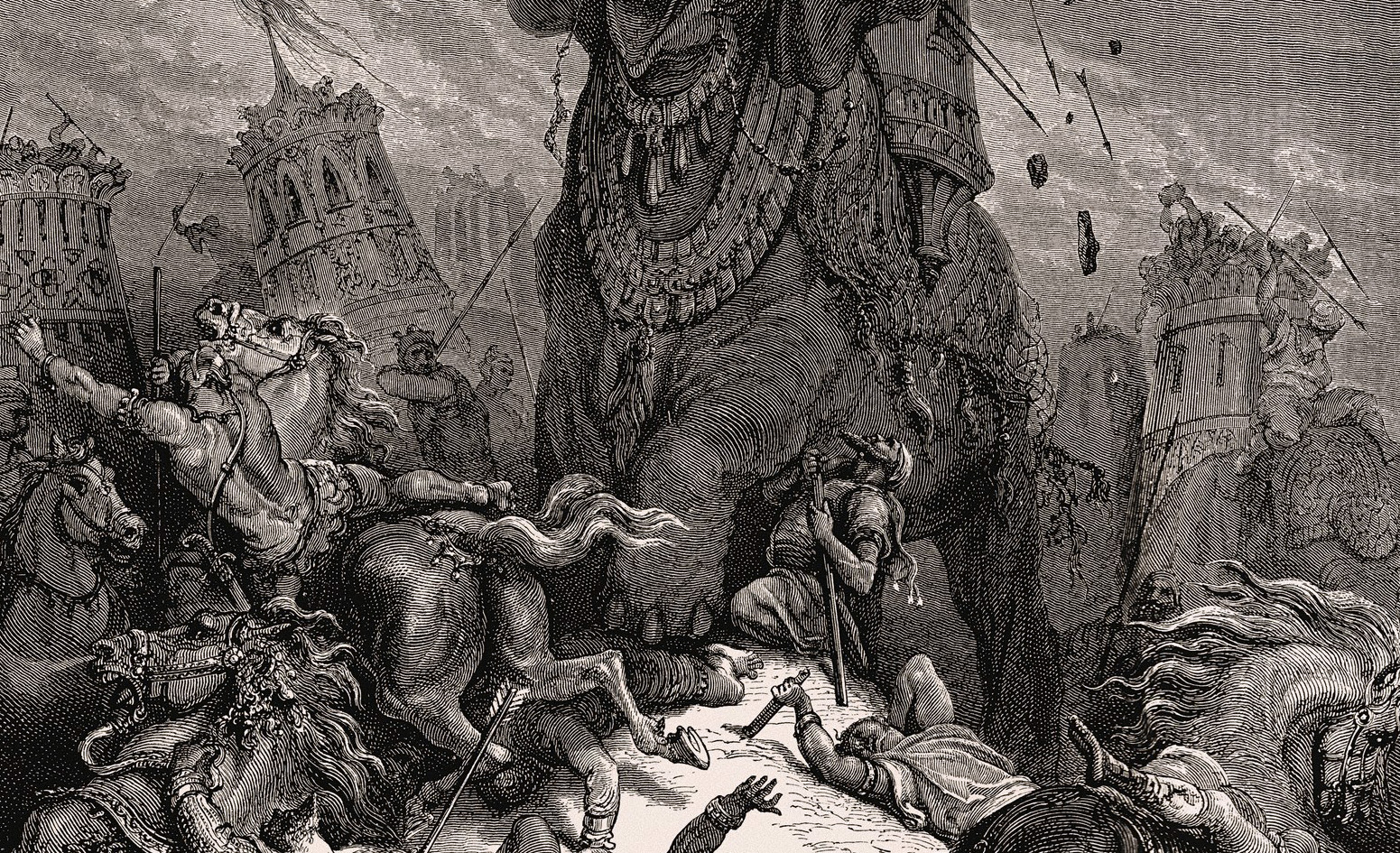 From Death of Eleazer by Gustave Doré, 1866. Wikimedia.

“In the days of Matityahu, . . . the wicked kingdom of Greece rose up against Your people Israel to make them forget Your Torah,” begins Al ha-Nisim, the “For the Miracles” prayer that is said during these days of Hanukkah. The revolt of the Maccabees was of course not a revolt against the country we call Greece, nor did “the wicked kingdom of Greece,” malkhut Yavan ha-r’sha’ah in the Hebrew of the prayer, rule that country. This kingdom was the Seleucid empire, a monarchy in west Asia founded by Seleucus I, a general in the army of Alexander the Great who took control of most of its vast Asian conquests after Alexander’s death in 323 BCE. Although the empire’s eastern territories were soon lost, its western half was still intact when Antiochus IV, Seleucus I’s great-great-great-grandson and the villain of the Hanukkah story, was crowned in its capital of Antioch in 175 BCE, eight years before the Maccabean revolt broke out.

Indeed, while Yavan is the word for Greece in both modern and pre-modern Hebrew, it did not in its earliest usage denote mainland Greece at all. This is clear from the genealogical lists in the tenth chapter of Genesis, which attempt to trace the descent of the known peoples of the earth following its repopulation by Noah’s sons after the flood. In dividing humanity into three major groups based on language, race, and geography—the descendants of Shem or the Semitic peoples of the Middle East, the descendants of Ham or the peoples of Africa, and the descendants of Yefet or the Indo-European peoples of southern Europe and Asia Minor—the Bible says of the latter: “The sons of Yefet were Gomer and Magog and Madai and Yavan and Tuval and Meshekh and Tiras. . . . And the sons of Yavan were Elisha and Tarshish and Kittim and Dodanim. These then split into the isles of the Gentiles, each according to its language and its family.”

Putting aside the question of whose ancestors Gomer, Magog, Madai, Tuval, Meshekh, and Tiras were, Yavan is evidently the progenitor of the inhabitants of the Greek islands of the Mediterranean. His son Elisha can be identified with Alashiya, the name of Cyprus in ancient Hittite, Akkadian, Ugaritic, and Egyptian; though the identity of Tarshish is uncertain, Kittim is probably either the Greek-speaking Cypriot settlement of Kition or a scribal miscopying of Kretim (Crete); and Dodanim, spelled Rodanim in a parallel passage in the book of Chronicles, most likely refers to the large Greek island of Rhodes. None of these names refer to anywhere on the Greek mainland.

And with where is Yavan himself to be associated? Here we need to turn from Hebrew genealogical mythology to its Greek counterpart, beginning with the Noah-like figure of Deucalion, who alone survived a great flood with his wife Pyrrha. The two had a son named Hellen (not to be confused with the Helen of the Trojan War), the ancestor of the Hellenes or Greeks, who in turn had three sons, Dorus, Aeolus, and Xuthus. Xuthus fathered Achaeus and Ion, or Iáfon in the name’s older pronunciation—and thus are accounted for all four of the population groups into which the ancient Greeks, divided themselves: the Dorians, the Aeolians, the Achaeans, and the Ionians.

From mythology, we now proceed to ancient Greek historical tradition. This held that when the Dorians invaded mainland Greece from the north and overran it, the Ionians or Iáfonians, then living in the Peloponnese and the area around Athens, fled their homeland and migrated eastward across the Aegean Sea to settle on the western coast of what is today Turkey, and on some of the islands that face it. (The Ionian Sea, which lies on the other side of Greece, has no apparent connection with the Ionians and it is unclear why their name was attached to it.)

This migration was probably concluded by 1000 BCE, by which time the Ionians were firmly established in their new home. Sailors, traders, and merchants, they came to be among the wealthiest and most cultivated of Greek speakers, and their main cities, such as Miletus and Ephesus, were cultural and intellectual centers of the ancient Greek world; the 8th-century Homer was an Ionian, as were such 6th-century pre-Socratic philosophers as Thales, Anaximander, Heraclitus, and Anaxagoras. Although, politically, there was never any kingdom of Ionia, the separate city-states of the region were organized in an Ionian League that kept its independence until conquered by Cyrus the Great in 546 and incorporated into a Persian satrapy known in old Iranian as Yauna.

Yauna resembles Yavan, as do other names for the land of the Ionians—or for the ancient Greeks (or for Greece itself)—in various ancient tongues and their modern derivatives. The Assyrians knew of a people living on the coast of Asia Minor called the Ia’amanu. To the Babylonians, these were the Yamanaya. Egyptian texts speak of seacoast-dwellers to the north called the Ywnj (ancient Egyptian was written without its vowels). When Alexander the Great invaded India, the Greeks under his command were termed Yavana by the natives, and an Indo-Greek kingdom with the Sanskrit name of Yavanarajya, the kingdom of the Yavana, reigned until the start of the Common Era. Greece itself was (and still is) Yunan in Arabic and in many of the Arabic-influenced languages of southeast Asia.

What happened, it would seem, took place in three stages. In the first of these, ancient peoples living in geographical proximity to the Ionians learned that they called themselves Iὸnes or Iáfones. It was at this stage that the name Iáfon must have become known to the authors of Genesis, since the “v” of Yavan is the not-yet-elided “f” of Iáfon.

The Ionians were the first Greek speakers encountered by the peoples of the eastern Mediterranean—who, subsequently coming into contact with other Greeks, called all of them Ionians and passed the term on to the interior of Asia. This was stage 2 of the process, as can be seen in the Indian term “Yavanas,” though Alexander’s soldiers came from mainland Greece. This was also the time of the composition of Al ha-Nisim, in which malkhut Yavan refers to a Greek-speaking monarchy in Syria. Only in stage 3 did Yavan come to signify, as it does nowadays, mainland Greece.

The ancient Greeks themselves, with their wanderlust and love of planting new colonies all over the Mediterranean world and beyond, were indifferent to the distinction between mainland Greece and its offshoots. Greece was not so much a physical place for them as it was the home of a language and a culture, and wherever these struck root, so, from their point of view, did Greece. “One by one,” wrote the historian Will Durant, “these [Greek] colonies took form until Greece was no longer the narrow peninsula of Homeric days but a strangely loose association of independent cities scattered from Africa to Thrace and from Gibraltar to the eastern end of the Black Sea. . . . Through these busy centers of vitality and intelligence the Greeks spread the seeds of that subtle and precarious luxury called civilization, without which life would have no beauty and history no meaning.”

The Maccabees were not worshipers of beauty and thought the meaning of history lay elsewhere. But for them, too, Greece, or Yavan, to use their word, was less a place than a culture and spirit that they stood in opposition to. They had their own idea of civilization, and the conflict between Hellenism and Hebraism, so fecundating for the development of the Western world, started with them.

The Maccabees, the Greeks, and the Origins of the Conflict Between Hellenism and Hebraism