Hebrew was once written in both directions. How did it fix its direction, and what does that show about the history of writing in general? 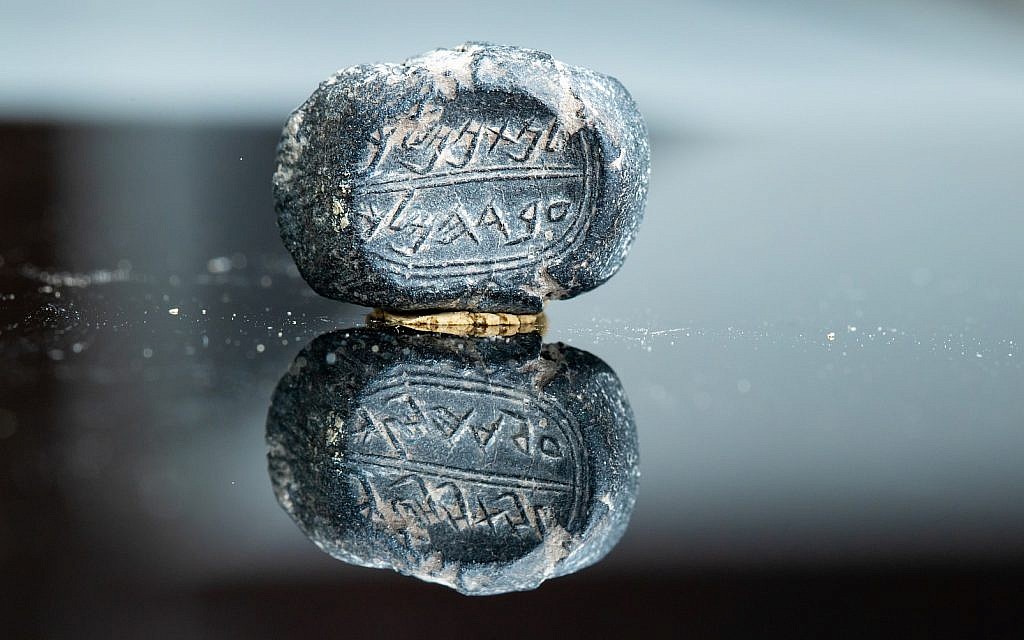 A seal dating to the First Temple period with paleo-Hebrew writing on it. Wikipedia.

“Could you explain why and how Hebrew came to be written from right to left? And how did/do right-handed scribes using pens or quills avoid smearing the text?”

To take Mr. Grossman’s first question first, one of the things that can be learned from the recently deciphered 1700 BCE Canaanite inscription found on an unearthed ivory comb in southwest Israel, and discussed in my previous column, is that Hebrew, in its most protean stage, was not exclusively written from right to left. Nor was it exclusively written from left to right. The comb’s two rows of seventeen letters were written in both directions. As described by the Jerusalem Journal of Archeology article on which my column was based:

In the first [top] row the script runs from right to left, and when the engraver reached the edge of the comb, he turned the comb through 180 degrees and wrote the second row from left to right, in such a way that the rows are arranged “heads on heads,” with the heads of the letters in the middle of the comb and the bases of the letters facing both lines of teeth. . . . Because of the [180-degree] change of orientation both rows start on the same side of the comb, unlike in the boustrophedon method.

Boustrophedon is a Greek word meaning “ox-turning” and refers to writing in which, when the writer reaches the end of a line, he starts back in the reverse direction in the next line, much as a plowing ox does upon reaching the border of a field. Thus, if I were writing this column in boustrophedon, the next two lines

(I say “somewhat” because in boustrophedon the orientation of the individual letters was also often reversed in mirror-image fashion, so that the “k” in the “like” of line 2, for example, would appear with its two arms to the left of the vertical rather than to the right.) Using the method employed on our comb, on the other hand, “exactly like this” would also be upside-down. The ox would not only have headed back the other way, it would have done so with its feet on the sky and its head toward the earth, plowing its furrows in the clouds.

Boustrophedon was a not uncommon method in the early history of writing; it occurs in Egyptian hieroglyphics, in alphabetic Semitic inscriptions, and, especially, in ancient Greek. For the scribe, it had the advantage of being more efficient, since on coming to the end of a line, he did not have to move his chisel (if engraving in stone), cutting instrument (if carving in bone or ivory), stylus (if incising wet clay), brush (if painting on pottery), or quill (if writing on papyrus) back to the beginning of the previous line but could continue from where he had left off. For the reader, however, it may have been less advantageous. One can move one’s eyes quicker than one can move a writing instrument, and perhaps more quickly than the time needed for the brain to readjust to the change in directionality. Boustrophedon, in any case, did not, with rare exceptions, survive antiquity.

And yet whatever its pluses and minuses, boustrophedon makes one thing clear: writing and reading from right to left is obviously no more natural or unnatural than writing and reading from left to right, the two having existed side by side and been practiced by the same cultures. The choice of one over the other, or over the preference of such Asian languages as Chinese and Japanese for writing vertically from top to bottom, has not been dictated by human nature.

Is it then arbitrary chance that has led some languages, like Hebrew, Aramaic, and Arabic, to be written from right to left, and others, like those of Europe and such non-European ones as Thai and Hindi, to be written from left to right? The answer is yes and no, because there are historical lines of development that have certainly played a non-arbitrary role. The alphabet used by all the peoples of Europe descends, often via Latin, from ancient Greek, and the Greeks derived their alphabet from the Phoenicians—who, unlike the boustrophedous Canaanites whom they derived their alphabet from, wrote only from right to left, thereby setting a precedent for all the Semitic languages of the Middle East. But the Greeks, as we have said, were boustrophedous too, and when they ultimately settled on a single direction, it was, for no clear reason, left to right.

It has been argued that the shift from right-to-left to left-to-right writing was influenced by technical developments, and specifically, by the transition from chiseling letters on hard surfaces to inking them on parchment or papyrus—the argument being that whereas most people are right-handed and naturally slant a chisel leftward while hammering it with their right hand, right-to-left writing with ink risks smudging the letters with the heel of the right palm as one proceeds along the line. The Greeks, it is claimed, adopted left-to-right writing to avoid this.

The supposed smudging effect of right-to-left writing lies behind Mr. Grossman’s second question. As an explanation of why most of the world writes from left to right, however, it does not make much sense for three reasons. In the first place, as every right-to-left writer knows, one can easily write that way without smudging anything if one does not drag one’s hand along the page while writing. Secondly, while such hand-dragging is a danger only with a cursive script in which all the letters are joined and there is no raising of the hand between one letter and the next, the Greeks, at the time they chose to write exclusively left to right writing around the 5th century BCE, did not yet have a cursive script and wrote all their letters unjoined. And thirdly, if smudging is such a problem in right-to-left writing, why didn’t the scribes of a language like Arabic, which can only be written cursively and has no uncial form, opt for left-to-right writing like the Greeks?

There are undoubtedly factors that have favored left-to-right writing in the course of history, but they have been religious, political, and cultural. When, for example, Ethiopia was Christianized in the 4th century CE, its kings ordered the country’s Ge’ez language, which was a Semitic one that had been written right to left, to be written left to right so as to align it with the writing of Christian churches elsewhere. Similarly, the shift from top-to-bottom to left-to-right writing that took place in 20th-century Chinese was a product of the Communist regime’s desire to modernize and of the practical need to accommodate a growing number of foreign (particularly English) words and sentences in Chinese texts, most of all in scientific articles. Such factors, in one form or another, have influenced the direction of writing throughout history, but they have had little to do with the eye-hand-brain connection that is involved in the physical act of putting letters together.