A Letter to My Liberal Jewish Friends

The president’s address last week to Congregation Adas Israel as “an honorary member of the tribe” was something other than it seemed. 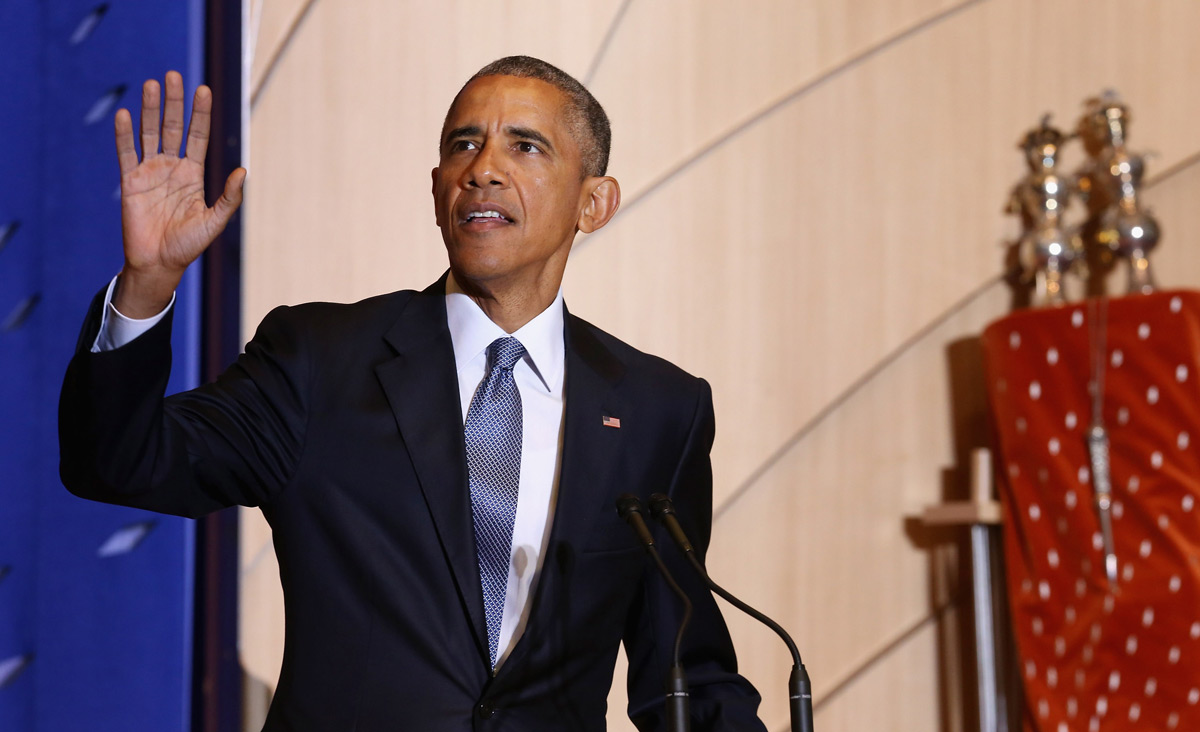 On Friday, May 22, President Obama, calling himself “an honorary member of the tribe,” addressed you not just as the president of the United States but also as an explicit adherent of the “tikkun olam” tradition: a Jewish viewpoint for “repairing the world” that, in his reading, promotes universal progressive ideals like fighting bigotry and working for social justice everywhere. Thus, for him, the same “shared values” that underlay the civil-rights movement in the United States were what led him to identify himself with the cause of Israel—and also with the cause of Palestinian nationalism.

Although, as you may have noticed, the president never mentioned Israeli Prime Minister Benjamin Netanyahu by name, the heart of his speech was devoted to justifying his own role in their by now famous conflict. At the heart of that conflict, he suggested, was Netanyahu’s presumed hostility to recognizing the rights of the Palestinians. Making references to Ramallah in one breath and Selma in the next, and sketching an ethical map that made the civil-rights movement and Palestinian nationalism interchangeable, the president implied that support for Netanyahu’s policies was tantamount to rejecting the legacy of Martin Luther King, Jr.

It was Chemi Shalev, the U.S. editor of Haaretz, who best captured the essence of Obama’s May 22 message to you: “I represent your core values far better than the elected leader of Israel.”

To judge by the enthusiastic applause, many of you accepted the president’s sincerity and strongly agreed with his message. May I ask you, however, to pause and consider an alternative view? I cannot claim, as Obama did, membership in the tribe, but I can say that I am well informed both about the Middle East and about United States policy toward that region. In addition, I am deeply concerned about the deterioration in Israeli-American relations.

Here’s my question. As Obama donned his yarmulke and embraced your community, did you also catch the hint of a warning? If you did, it was because the president was raising, very subtly, the specter of dual loyalty: the hoary allegation that Jews pursue their tribal interests to the detriment of the wider community or nation. Obama was certainly not engaging in anything so crude as that; nor is he an enemy of the Jewish people. But he did imply that many Jews—that is, Jews who support Benjamin Netanyahu—have indeed placed their narrow, ethnic interests above their commitment to universal humanistic values. In his view, they have betrayed those values. And so the warning was faint, but unmistakable: if Jews wish to avoid being branded as bigots, then they—you—must line up with him against Netanyahu.

“But the president is right,” many of you would no doubt reply. “Netanyahu’s values are not my values.” That may well be the case. Yet this is also why it is a trap for you to accept Obama’s claim that his fight with Netanyahu is a struggle over “values.” The struggle is not over values. Rather, at the core of the Netanyahu-Obama grudge match is one issue and one issue only: the president’s long-sought détente with the Islamic Republic of Iran.

To be sure, there are other sources of tension between the two men, both personal and political. Among them is the Israel-Palestinian issue, which the president dwelt upon at length in his remarks to you—but in the service of a goal that has nothing whatsoever to do with Israeli-Palestinian relations. If this sounds too calculating by half, consider three key points.

First, every informed observer knows there is no chance of moving Israel-Palestinian relations forward in the next two years—and also that, what with the Arab and Muslim Middle East exploding in violence, Benjamin Netanyahu is hardly the only skeptic in Israel when it comes to advancing a two-state solution any time soon. Had Isaac Herzog, the leader of Israel’s main opposition party, won the election in March, the prospects of reaching such a compromise solution would have remained the same as under Netanyahu: that is, next to nil.

Let’s not forget that, back in April 2014, it wasn’t the Israeli government that put the final nail in the coffin of the American initiative to solve the Israel-Palestinian conflict. Netanyahu, for his part, grudgingly accepted the Americans’ draft framework agreement; Mahmoud Abbas refused. I have yet to hear the president excoriate Abbas for his betrayal of the values of progressive humanism.

Next, Obama has fallen out with or pulled away from almost every traditional American ally in the Middle East—a development that, even if it did not create the chaos now engulfing the region, has certainly played a major role in abetting it. The president’s relations with the leaders of Saudi Arabia, Egypt, and Turkey are nearly as strained as his relations with Netanyahu. While these leaders may shrink from disagreeing with him in public, they have unmistakably signaled their conviction that the president’s deal with Tehran will not achieve its stated goal of stopping Iran’s progress toward a nuclear weapon and that, in his obsessive pursuit of this deal, American policy is actively helping to turn the aggressively hostile regime of the mullahs into the dominant power in the Middle East.

Which brings me to the third point. In the course of extolling the virtues of his emerging nuclear deal, the president paused to express his unyielding commitment to shielding Israel from the threat of Iranian expansionism. Or did he? Take a look at his exact words:

[E]ven if we do get a good deal, there remains the broader issue of Iran’s support for terrorism and regional destabilization, and [its] ugly threats against Israel. And that’s why our strategic partnership with Israel will remain, no matter what happens in the days and years ahead. And that’s why the people of Israel must always know America has its back, and America will always have its back.

This gauzy rhetoric may sound reassuring but it is deliberately devoid of content—for good reason. The plain fact is that the United States is doing nothing to arrest the projection and expansion of Iranian power in the region; quite the contrary. In Lebanon, for example, Washington has cut funding for Shiite figures who remain independent of Iran’s proxy Hizballah. In Iraq, the United States, through the Iraqi armed forces, is actually coordinating with Iranian-backed militias and serving as their air force. Indeed, wherever one looks in the Middle East, one can observe an American bias in favor of, to say the least, non-confrontation with Iran and its allies.

The pattern is most glaring in Syria, where the president has repeatedly avoided conflict with Bashar al-Assad, Iran’s closest ally. The tendency surfaced again a few weeks ago in connection with mounting evidence that Assad has routinely attacked his own people with gas. If true, this fact should trigger a sharp American response in keeping with the president’s famous “red line” on the use of chemical weapons. But when questioned on this matter at a press conference, he contrived to find a loophole. Assad’s forces, he said, have been deploying chlorine gas, which “historically” has not been considered a chemical weapon.

The president’s sophistry demonstrates a simple but profound truth: his commitment to the progressive values of tikkun olam is governed by its own “red lines,” and is entirely utilitarian. Which again raises the question: what was his purpose in stressing this shared progressive commitment in his address to you, and what was his purpose in subtly reminding you of the costs of failing to abide by its terms?

The answer, I hope, is obvious. On June 30, Obama will likely conclude a nuclear deal with Iran. This will spark a faceoff with Congress, which has already declared its opposition to the deal. Congress will inevitably pass a vote of disapproval, which Obama will inevitably veto. In order to defend that veto from a congressional override, however, he must line up 34 Senators—all Democrats. This calls in turn for a preemptive ideological campaign to foster liberal solidarity—for which your support is key. If the president can convince the liberal Jewish community, on the basis of “shared values,” to shun any suspicion of alignment with congressional Republicans or Benjamin Netanyahu, he will have an easier time batting down Congress’s opposition to the deal with Iran.

Progressive values have nothing to do with what is truly at stake in this moment of decision. Only one final question really matters: in your considered view, should the Islamic Republic of Iran be the dominant power in the Middle East, and should we be helping it to become that power? If your answer is yes, then, by all means, continue to applaud the president—loudly and enthusiastically—as he purports to repair the world.

A Letter to My Liberal Jewish Friends